Over on the ENW podcast we've been going through the Ghosts of Saltmarsh adventures one at a time (the original versions). I thought prospective DMs might enjoy a quick summary. Note -- SPOILERS! There are plot twists and stuff here. 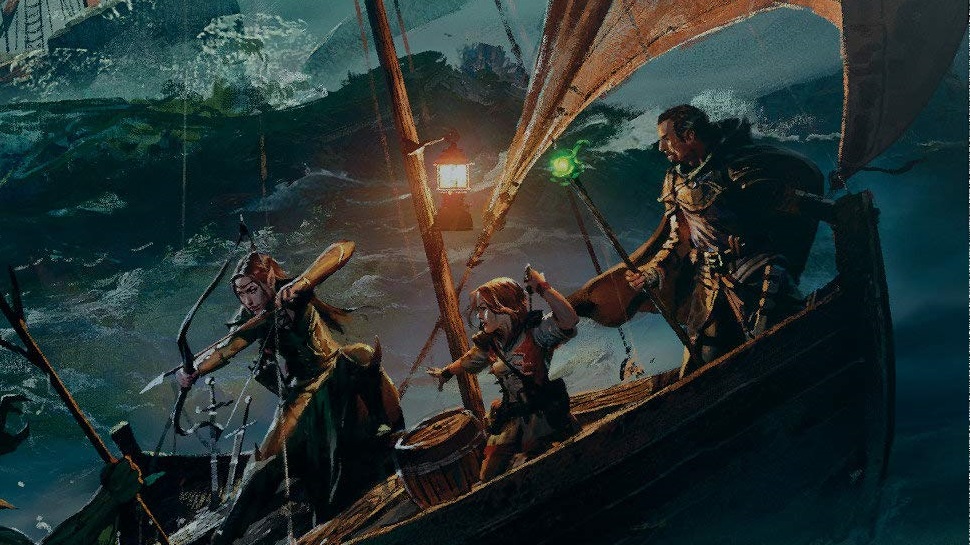 SPOILERS. Seriously, there are plot twists. I mean it. Oh, and I might misremember some stuff - sorry! I've also included podcast links where we discuss them for those who want a deeper dive.

Some of you may know all this already.

The Sinister Secret of Saltmarsh. This is a Scooby Doo episode. There's a haunted house outside Saltmarsh. The PCs go investigate, turns out its smugglers using an illusionist to make it seem haunted to keep people away. The second half of the adventure involves rowing out to the smugglers' ship and doing Under Siege all over it, and they discover that the smugglers are smuggling arms to lizardfolk. And they would have gotten away with it if it wasn't for those pesky kids!

#40 U1 The Sinister Secret of Saltmarsh!

Danger at Dunwater. The revelation of the lizardfolk arming up leads to the PCs being sent to clear out the lizardfolk base. They do so, maybe kill a bunch of lizardfolk, before discovering the lizardfolk are the good guys and they're refugees displaced by evil Sahuagin. They're trying to form an alliance with other wet races like mermen and stuff to drive the Sahuagin out. Hopefully the PCs don't murderhobo ALL of them before finding this out.

The Final Countdown. This is a classic pop song by Europe.

The Final Enemy. The PCs are sent to scout out the Sahuagin lair (which used to be the lizardfolks' home). They do that, and two of the three dungeon levels are underwater. Luckily there's a secret room with some underwater magic stuff to help them. The PCs scout the place out, hopefully don't fight too much as they're seriously outnumbered (like, some rooms have 50 sahuagin in them), head home, and then Saltmarsh council sends an army out to kill the bad guys offscreen. The end.

Those three adventures make a trilogy. There are several occasions where the PCs enter a room to see a line of lizardfolk or sahuagin lining up in formation under the command of an officer. Like, more times than would seem reasonable to expect. Also there's an underwater temple with a great big shark. And there's no map of Saltmarsh and the modules tell you to make your own (though I'm sure Ghosts of Saltmarsh will rectify that). And also they're designed for 6-10 PCs, except The Final Countdown which is 6-12, which again I'm sure will change.

The next four are all from DUNGEON magazine and are unconnected, unless GoS creates a meta plot to connect them all.

Salvage Operation. This is by Mike Mearls back in 2005 (the same year he joined WotC, although Paizo were publishing DUNGEON at the time). A trader's ship got lost and he lost valuable stuff. He hires the PCs to recover it, and they find spiders, zombies and ghouls on it (there's a backstory about cannibal orcs to explain that), and then a giant squid sinks the ship and there's a countdown while they try to escape or they drown.

Isle of the Abbey. My least favourite of the bunch. PCs hired to clear an island (pirates, undead). There's a whole area which is skeletons coming out of sand dunes, and an abbey with some bad guys in it. One is called Ozymandias, but nobody likes him. It's pretty short this one.

#46 Salvage Operation to the Isle of the Abbey

Tammeraut's Fate. I liked this one. A warship gets sunk off an island and all the bad guys drown and come back as wet zombies, except their leader, who becomes a ghost. On the island is a hermitage, and the wet zombies kill all the people there except three who hide away. The PCs are on the mainland, find a wet corpse being eaten by harpies, and the local town sends them to check out the island. They get there, explore a bit, meet some sea hags and peryton and some other stuff, and then find the three survivors who tell them the wet zombies are coming back that night. So the PCs have to do the A-Team and set loads of traps, and defend all night against the wet zombies. If they survive a seagull tells them the backstory, and then they can use a bunch of water breathing stuff they found in a room to go down to the ship and fight the ghost.

The Styes. Definitely the best of them. I'm very fond of this adventure, and not just because it has a baby kraken. The Styes is a part of town which is like Crime Alley in Gotham, but wetter. There's a serial killer, but he got executed yesterday, but really he was being possessed by an aboleth who was trying to strike fear in the town, and use the negative emotions like in Ghostbusters 2, but to feed the baby kraken. Baby kraken gets bigger when the town is sad. The PCs figure out the 'killer' wasn't responsible when another killing happen after he was hung, and they follow some clues via the militia to an alchemy warehouse with three pet manticores guarding it to a ship hanging off a crane over some mud (honestly, that's cooler than it sounds) and a flesh golem, and eventually a temple to Tharizdun. Finally they go underwater to the aboleth lair where he's raising the baby kraken which is quite big now. Also, the aboleth is hiding from other aboleths because he got religion and started worshipping Tharzdun, which they don't approve of.

That's the very, very, very short version. I love The Styes -- it's dripping with flavour. Tammeraut’s Fate's siege scene will be fun with the right group who throw themselves into the planning and trapbuilding. And I like the Scooby Doo episode which is the first half of Sinster Secret of Saltmarsh.

I expect these will change a lot before making it to Ghosts of Saltmarsh. That's just a quick look at the originals. I may have misremembered some stuff!

If I HAD to rank them, I'd choose:

1. The Styes
2. Sinister Secret of Saltmarsh
3. Tammeraut's Fate
4. Danger at Dunwater
5. Salvage Operation
6. The Final Enemy
7. Isle of the Abbey

Your mileage may (and probably will) vary. And remember, these are the original adventure -- I have no insight into how they've been updated for 5E!
Last edited by a moderator: May 7, 2019
Click to expand...

Hard pass, they should have done Desert of Desolation instead.


I don’t like sand. It’s coarse and rough and irritating and it gets everywhere.

Grimstaff said:
I don’t like sand. It’s coarse and rough and irritating and it gets everywhere.
Click to expand...

That's what the water is for--but avoid salt water; it stings open wounds and unexplained rashes.

I've considered working my own Desert of Desolation AP. Given the average size of most AD&D adventures, there's a LOT more in each one than the average AP chapter. I figured DoD would probably be 3-10 or so (I figure gain 2-3 levels per adventure). Can't start at 1, or the PCs probably just die in the desert before anything happens.


Yeah, who wants rules for ships. Should have gone with rules for caravans instead.~


I'm being sarcastic of course.

Shiroiken said:
I've considered working my own Desert of Desolation AP. Given the average size of most AD&D adventures, there's a LOT more in each one than the average AP chapter. I figured DoD would probably be 3-10 or so (I figure gain 2-3 levels per adventure). Can't start at 1, or the PCs probably just die in the desert before anything happens.
Click to expand...


I too have thought of adding DoD to the "Egyptian" themed area of my world. As it is I have a copy of mud code from my brother for Thalos.

The once great city of Thalos lies ruined near the Great Eastern Desert. It is said powerful magics are at work keeping the cities' protectors at work in the towers, albeit ineffectively, even to this day, and even as the city is infested with lamia.
Click to expand...

I can present several reasons why they went with this particular option though:

2) They wanted to present expanded rules for underwater and nautical adventures;

3) They wanted to present a set of underwater monsters;

4) They wanted to present an adventure that was a sandbox rather than a linear epic. With good reason, the computer game market suggests sandboxes are currently very popular;

5) They wanted to present an adventure that started from 1st level. Demographics show low level adventures sell best, and it looks like whatever they have coming up at "The Decent" will be a high level adventure.


Does any of this mean I will buy it? Maybe, or maybe not. I will assess the quality of the product when it actually comes out and then decide to buy it or not.

I have already order the store copy. I dmed U1-U3 back before the internet.

Thanks for the summary. I pre-ordered this as soon as it was available. Looking forward to it.

But, the big question... do the maps have north at the top of the page? Kidding! I don't care.

Nice summary and I’m looking forward to the boat rules although I’ve been using the 2e books for it recently and they worked fine for ship to ship combat and such.

I recall running Isle of the Abbey in 2e days and thought it was fine. I recall liking the set up and beach encounter with grids marking where skeletons would pop up if you stepped on that square.

I would like to see all of these tied together a bit for continuous play and updated to 5e in a way that makes sense and change monsters to fit with the new rules. I don't mind having the new rules for ships and underwater in the book. It may cover only a chapter or two and I see where other would buy the book to get the new rules and not want/need the adventures.

they'll probably include the map and locations in Saltmarsh from the 3.5e DMG II

Wrathamon said:
they'll probably include the map and locations in Saltmarsh from the 3.5e DMG II
Click to expand... 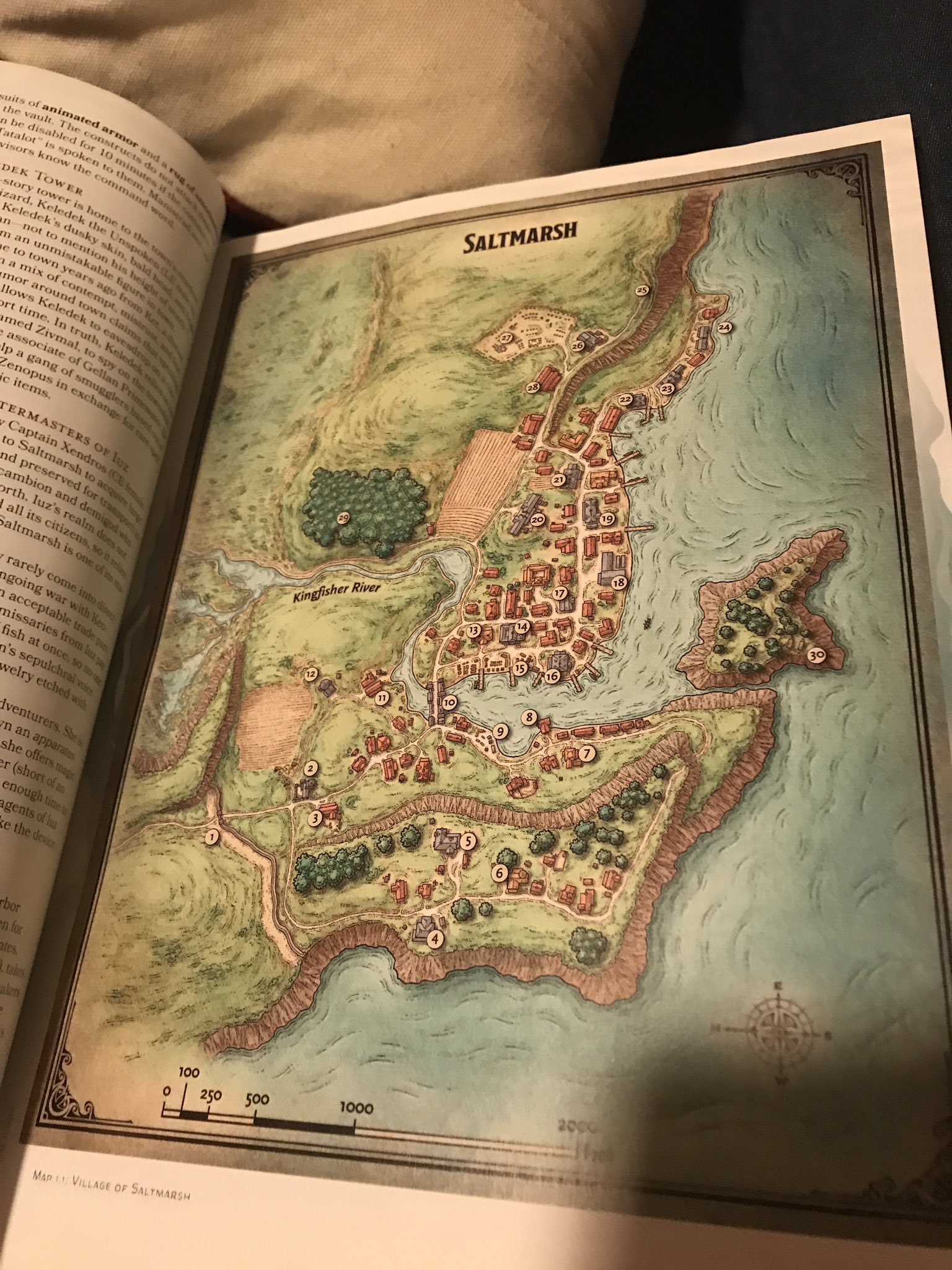 D&D General Does anyone else title their D&D sessions?
2 3 4

D&D General Short of running the game, my favorite part of D&D is crafting!

D&D 5E Tales from the Yawning Portal vs. Ghosts of Saltmarsh
2