D&D General How often do your sessions end mid-combat?

One of my current groups have had 24 sessions in this current campaign, sessions have ended mid-combat at least six times.
My other group (15 sessions) has had it happen at least three times (including yesterday).

I don't recall when this started to happen frequently, probably in the 3E era of the early 00s. It may have happened back when we were playing 2E as well, but back then my friends and I were in college (or drop-outs) and our sessions were regularly six or seven hours long and when were were really into it, we'd play all night or twice over a weekend, etc. . .

But anyway, at some point it became a semi-regular occurrence for sessions to end in the midst of a combat, so we had to be sure to note every character's position on the battlemat and jot down initiative, current HPS, and which spells had been cast (remaining duration, etc). These days we still do some of that, but taking a picture of the battlemat with my cellphone means I can share it with the group and re-set it up as it was pretty easily when we continue. I am sure (or at least I hope) that VTTs make this easier.

I do tend to have long combats in my games (for example, last night's game ended four rounds into a combat and my guess is that it will probably last another 4 to 8 rounds or more), so "just playing a little longer to finish up the next round" or whatever would rarely, if ever, get it done.

And to be clear, this is not a complaint. I actually like ending in the midst of a combat, especially when there is some kind of cliffhanger. For example, yesterday we ended when reinforcements arrived top-side from below deck of the ship the PCs were attacking. In my other group, we once ended just as an opponent picked up the dying gnome PC and held a dagger to his neck, using him as as shield and demanded the raging barbarian surrender. . . oops! That was a heck of a lot of fun - we had a month to ruminate on that!

I also like that that this means the next sessions begins in media res! There is less "catch-up" or "warm-up" time and get right into it. No one forgets what was happening when we end mid-fight.

The downside, I think, is for PCs who are already unconscious or dying or whatever, start the next game that way and have less chance to contribute from the beginning of the next session, but that is not as common. As part of the final 10 climactic final sessions of my "Out of the Frying Pan" campaign, there was a battle that started at the end of one session and didn't really end (well, lots of small skirmishes back to back) until the session after next. Unfortunately, this meant a PC who had been paralyzed in that first session didn't get to act again until after the following session. Luckily, he had a blast running an NPC in the meantime.

Below are the pix I snapped of where we left off, the initiative order, the current (and temporary) hit points of PCs and how long is left for the Heroism spell going, and then the actually mini positions (I also jotted them down on the prop ship in pencil). 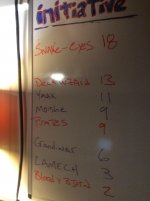 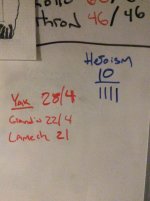 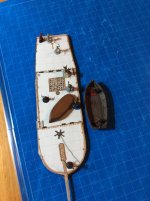 So how about you? How often do sessions end mid-combat? Do you care? Do you try to speed up and finish before ending? Do you call the session early if a combat is about to start but the end of the scheduled play time is approaching? Other thoughts?

We try to end on cliffhangers for most games even if that means ending a few minutes early, which is often at the start of a combat, but there are plenty of times when we end mid-combat after some kind of sudden turn of events that is compelling. The DM will just say we'll end on the bottom of the next round so everyone gets one more go to do something cool before we call it. It's easy enough to pick up where we leave off.

Maybe once in a campaign. I would rather end early before the fight, then start one and have to pause it.

I always try to end the session with the question, "What are you doing next?" or "Where are you going next?" or similar. Never in the middle of a combat.

I haven’t ended a session mid-combat since switching from 4e to 5e. It happened fairly often in 4e, but I always hated it. We’d have to take a picture of the table so we knew how to set it back up the next week, and then it would always take a bit in the beginning of the session to remind ourselves what had been going on. It was just a mess. With 5e combat generally going faster, I’ve been able to make sure this doesn’t happen any more.

I also try to structure my sessions so they end on some kind of resolution, reversal, or new incitement to action, and I will end a session early to insure this happens. When it starts getting close to time to end a session, I’ll start paying attention for one of those things - completing a major objective, winning a climactic encounter, or suffering a significant setback. If one of those things doesn’t look likely to happen soon, I’ll try to end on a cliffhanger, like just before a big set piece encounter, rather than risk ending in the middle of the action.

I try to time combats so that we don't end in the middle just because of the hassle. If using VTT it's not too bad because we have positions on the map and people track their PCs on DndBeyond. But I'd still rather end at a clean spot just so I can end the session similar to @commandercrud so I can ask about direction for next session.

iserith said:
The DM will just say we'll end on the bottom of the next round so everyone gets one more go to do something cool before we call it. It's easy enough to pick up where we leave off.
Click to expand...


We definitely do this.

Supporter
I've noticed it seems as though it's trending more that way as the PCs I'm DMing get to higher levels, and can just do more--and it requires more to challenge them. While I'd rather end a session early than pick up the next mid-combat, I've found that my sense of how long a round takes seems off, when it didn't so much before.

I think I just got used to it happening at some point and started trying to make the best of it.

As I suggested above the shortening of how much time we have to play (or even want to play - marathon sessions over 5 hours are out the question for my old bones and fuzzy brain) has led to this happening more. Yesterday's session, for example was only 3 hours and usually we only have one combat (maybe two) per session (if any).

I voted never, but it has actually happened on rare occasion. Usually as a result of someone having a personal emergency in the middle of combat. You play enough hours together and it's bound to happen eventually, and real life > game.

It probably hasn't happened more than once every few campaigns though. When it does, we might attempt to continue the encounter from our notes, though if it ended too abruptly we'll just assume it played out and move on.

Never. I prefer ending the session a bit short rather then start a combat we won't finish. Starting a session with a combat is the best thing to get the players into the game.

I actually really enjoy ending in the middle of combat when playing online, since set-up is so easy. Starting a session at the top of initiative order is really fun!

In face to face games I try not to, simply because setting up the map and minis takes a while.

BookTenTiger said:
Starting a session at the top of initiative order is really fun!
Click to expand...

This is how I started the last few campaigns right after introducing the PCs.

Just a few times, after lots of and lots of years dming I've gotten pretty good and gauging when we can start combats and finish them vs just wait until next time to start them.

Never. Add me to the list of "we will end early if the other option is cutting off mid-battle" people.

We don't use miniatures, so I don't have a boardgame to set back up, but even with TotM it's just too hard to get back I to what was going on - especially if we play only one every week or two.

It's way easier to cut off sight before or right after a battle and pick up from there.

I like to end on something important, like the start of a battle or big revelation. The next game can then start with excitement and a high level of interest to build from. Ending mid-combat is rarely a good idea.

When it happens it's usually not as a mistake in timing, but rather a big climatic showdown or maybe arc-ender that just going to be that long and that dramatic.

IMO outside of emergency situations, ending a session in the middle of a combat is a failure of timing by the DM. The difficulty of avoiding it, however, is heavily dependent on how flexible the end time is. Most games I've played have had very flexible end times, giving the DM a lot of leeway to pick a good stopping point. If a game revolves around real life events, such as babysitting, then this can make it much harder to time right. Fortunately my current group has a 4-5 hour session window, giving the DM plenty of time.

Shiroiken said:
IMO outside of emergency situations, ending a session in the middle of a combat is a failure of timing by the DM.
Click to expand...

I don't think so really.

Players have agency, they can start combats unanticipated by the DM almost whenever they like (or delay by a couple of real-life hours the start of combats that the DM had planned for, with the same effect).

We occasionally finish sessions mid-combat these days, and while it's not ideal, as others have said the VTT makes it easy and clean, because we can just start straight up again without messing about for ages getting maps and minis and spell durations etc organised. It did happen much more back when we were playing 3e, because combats took a lot longer then, especially at higher level, but we were all younger at the time and more able to stretch a session out a bit longer to finish off.