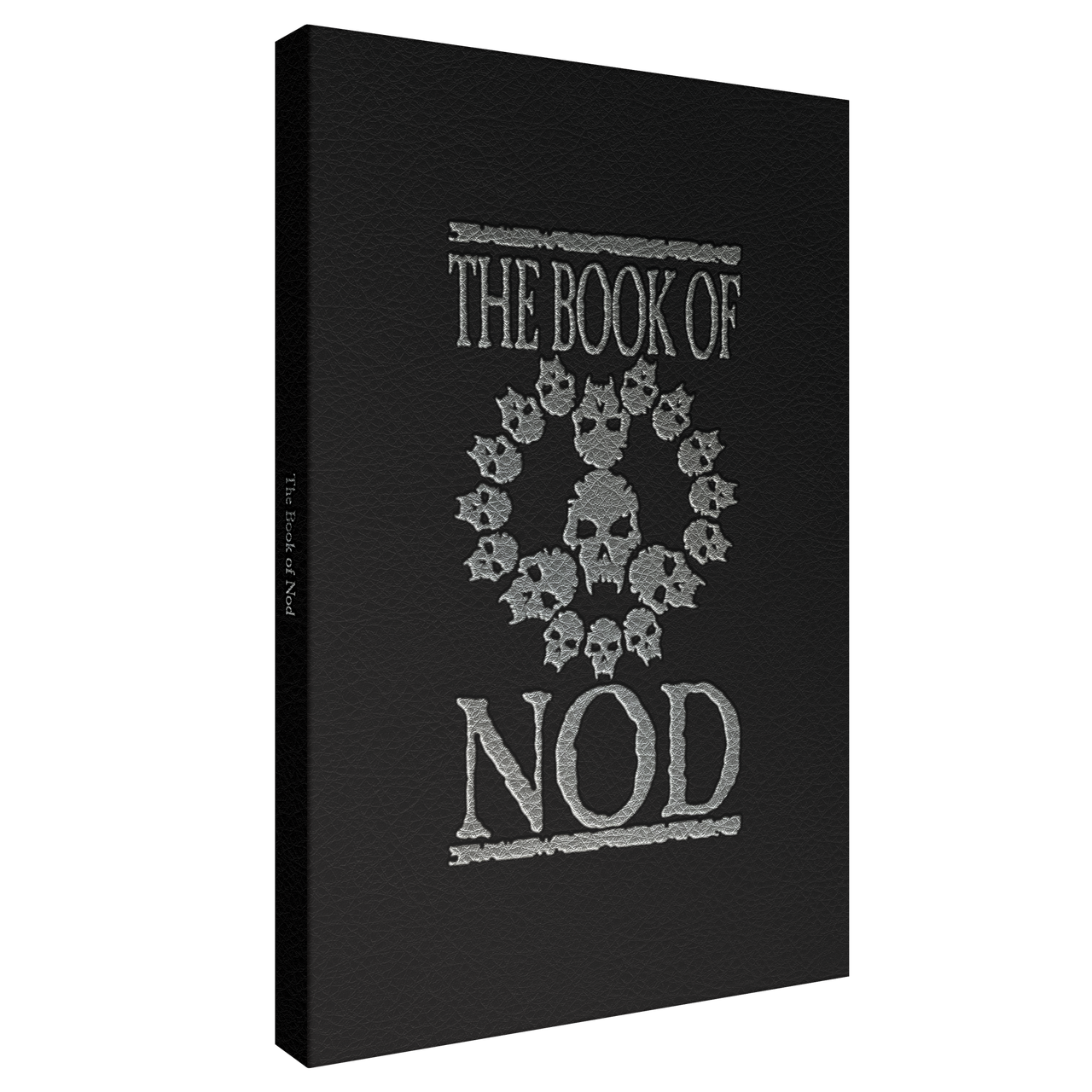 In 1993, The Book of Nod appeared on gaming store shelves around the world. It came just as Vampire: The Masquerade’s hardcover Second Edition was truly exploding into popularity. It shed light on the World of Darkness in an unusual way; as an in-game document. The book sold in stores was the same one that could be discovered by vampire characters in the game. There had been flirtations with documents like these before, such as Aurora’s Whole Realm Catalogue, but The Book of Nod stood out with its commitment to the bit. No stats, no game stuff, just a big scoop of backstory, even including footnotes after each section from the author/researcher of the book. Renegade Game Studios is releasing The Book of Nod in print in 2022 for the first time in years. I reviewed the digital copy provided to me to discuss it for players unfamiliar with the book.

The Book of Nod is the closest thing to what the Kindred could call a bible. It contains their creation myths, folklore about their early years as well as some proclamations of doom. These words are scattered throughout some striking black and white artwork throughout the book. In the World of Darkness, many vampires believe they are descended from the Biblical Caine who slew his brother Abel. The vampiric condition was a curse from God that he passed down through the generations, each one getting a little bit weaker than the last. It reminds me of the other books like this, from Revelations of the Dark Mother to The Fragile Path. Authors Sam Chupp and Andrew Greenberg delivered a fantastic collection of stories and poetry that While Wolf tried to replicate again and again to diminishing returns.

The first section of this book, Chronicle of Caine, lays out the elements of Caine mythology. Cain killed Abel because he thought his sacrifices to God were unworthy and so he killed his brother out of love. He then wanders the titular land of Nod and finds things in the darkness who teach him how to hone his curse into powerful abilities. This section ends with the founding of the first city openly run by vampires which is wiped out by Noah’s flood.

The next section, Chronicles of Shadows, digs into game lore more directly by offering stories of the Clan founders and opinions on the other World of Darkness denizens.This was the most interesting section on the reread since the book came out originally when a lot of these elements were still in flux. Even now, with the changes to the clans in Fifth Edition, , this feels like the section most open to interpretation.

Chronicle of Secrets rounds out the main text with some baleful prophecy. This is the World of Darkness after all and many of these events seem to have either already happened or are currently happening. The recent refocusing of the Sabbat as a Noddist death cult bears the most fruit in this section with plenty of quotes and bits that will frighten even vampires.

While The Book of Nod has been framed as something of a heretical text, the recent reshuffling of the power factions make that seem like a must more important distinction. The first time the book came out, there was barely any definition of the history of the Kindred so everyone gobbled this up chapter and verse. Now, it feels like one possible story out of many. The most popular one, sure, but tell that to a Ministry or Banu Haqim and watch them tell you their version of history. The connections with the Sabbat make this an object that could kick off a chronicle. Who left fragments of this book in Elysium? Who in the city is secretly digging into this forbidden tome?

To answer the main question many veteran Vampire players had: this is the same text and layout as the original edition, so there aren’t any changes if you still have an older copy. The only differences I noticed were an updated logo, credits page, and handy links within the documents to the footnotes in the back. There is a deluxe edition coming later next year that looks to give The Book of Nod the full artifact treatment like a Beadle and Grimm’s box or the HPLHS Masks of Nyarlathotep prop work. I would have liked to have seen, if not additional pages in this edition, then a companion volume like the ones Cubicle 7 is doing for The Enemy Within that discuss behind the scenes aspects and additional materials that have come out since then.

If you missed it the first time, The Book of Nod is an essential collection of lore for Vampire: The Masquerade. If you already have a copy, you can save your resources for another night.
Click to expand...

I poured over this book back in the day. V:tM was an awesome game that completely overtook my gaming group. I couldn't even hang out in a bar on the weekends with my friends without ending up in impromptu mini-sessions. Unfortunately, a buzzed storyteller ended up doing a lot of things he (or more accurately, I) regretted when we gathered around the table the next Sunday but it was worth it.