Brother Pelegon gladly accepts some of the healing Surina can provide, but is eager to get the bridge across the water.

Along with the villagers, the monk braves the freezing water. He is having a lot of trouble, however...

A reminder of hit point totals:

Once the bridge is across the water, Surina wades in, holds it stead, and starts encouraging the villagers to go across. The cold water felt refreshing, at least at first.

Everett says, "We can't wait. We need to leave now. There's no way we can travel with all these people stealthily." He continues, "I'm tapped out on major spells so I'm of no use trying to stop the Lizardfolk from following us. I'll lead the villagers out. You guys keep the stragglers from being recaptured. And try to slow down anyone coming after us." He starts to lead them toward human civilization as soon as the majority of them are on shore.

As the last few stragglers are pulled up on shore, someone spots a couple rafts being poled by lizardfolk guards coming down the river. (There are just entering the last map at A45.) They are still too far away to throw their spears at anyone but they are travelling with the current.

Swithun ran up and down the line of stragglers, encouraging both rear and van to move as quickly as possible. When he returned to the rear, he rose up on his hind legs to look for pursuing lizardfolk.

Surina joined Swithun in helping the stragglers; she scooped up one of the slowest moving children, and offered and arm to a struggling adult.

"Hold my jug," he says without looking at who takes it, helps a young boy out on the shore, then realizes an even younger girl is taking off with his liquor.

"Ey, come back," he yells, going after the girl, startling her and making her run back to the water to one of the older stragglers getting onto dry land. Pelegon sloshes behind, but the water makes the slope slippery and the aasimar falls facedown into the water...

Swithun can tell there are five lizardfolk who will be attacking in under a minute. There are also another dozen or so about a minute behind them.

Bro P and the girl fall into the river and are washed downstream about 200 feet before they can get back to shore. The girl, once she hits the water, stops fleeing from the monk and clings to him as they crawl back on shore. None of the lizardfolk seem to know Bro P and the girl are separated from the villagers. (Only Swithun noticed them finally getting to shore.)

Surina sees Bro P and the girl swept away and (I assume) feels the greater good is staying with the larger group of escapees. She helps stragglers stay one step ahead of the chasing warriors.

Drake is with those in the rear, I suppose.

Everett and Perin are deeper into the swamp with the head and middle of the pack of villagers respectively.

Several villagers are in the rear with Swithun and Surina, wielding scimitars in the face of the lizardfolk warriors. One of them ran after Bro P and the girl and even Swithun loses sight of him. One of the others says something about that being the girls uncle.

As the threat approached, Swithun was busy organising the villagers into a solid rear-guard of volunteers who would risk their lives to allow the others to escape to safety.

Brother Pelegon is startled as the girl suddenly clings to him as they both struggle to get out of the water, but eventually they succeed.

The monk looks around. They’ve drifted off quite a bit, and Pelegon is sure lizardfolk raiders must be on the prowl. They’d best get back to the others.

He motions for the girl to be quiet as the aasimar decides on the best course of action.

Surina sees the lizardfolk arriving. Setting, the child she was carrying down, she offers a quick prayer to the Family: asking Paleintar to speed the feet of the fleeing villagers, to Torayana to slow the current to bedevil the lizardfolk, and to Essembri to strengthen her as she sought justice for the villages.

The lizardfolk are slow to respond to the villagers' escape. By the time the trailing party members stop a handful of additional lizardfolk, the main group of villagers is a mile from the prison camp. By midmorning, the troop is leaving the swamp. Around that time, Brother P and the girl he chased after join the group. The girl cannot stop talking about how the injured monk fought off a pair of lizardfolk with her help.

A handful of lizardfolk from the friendly village are waiting for you at the edge of the swamp. They have food rations and well wishes as you begin the trek back to human lands. By nightfall, the ghost town of Leed's Landing is in sight and a small army is pulling to town from the other direction.

Everett meets his father, leading a large hunting party, at the church in town and they discuss what has been going on. Some of the party are reunited with former allies who have come with the army to rescue anyone else from the lizardfolk.

Stragglers have been flowing into Bit from Leed's Landing and East End telling of the incursions from the swamp. Everett's father decides to leave this force here to guard against further incursion. And regroup in Bit to build up a larger army for a true campaign against the forces of Ariamhodary. It takes a while but Everett and the party eventually get his father to understand that not all of the lizardfolk of the swamp participated in the incursion.

The villagers tell of finding platinum in the mines they were digging as well as, rumor has it, mithral. There is also talk of a large underground cave with a temple that they had to stay away from but that the lizardfolk would sometimes visit in groups of exactly three.

In Bit, the party are hailed as heroes. With the midsummer festival at an end, the city was somewhat sombre in tone. People died and a lot of people are displaced. Leed's Landing and East End are abandoned for now. There is worry about a lean winter with the amount of farms affected.

Time passes. Everett is not as available to you as he is now taking his government duties very seriously. His cousin's family live in the main Tillerson house now.

BOOK 2 BEGINS​
You led the villagers out of the swamp and into the bustling army base that Leed's Crossing has become. A few of you recognized innkeeper Kendrel and mayor Jurad from the last time you were here. Everett's father was leading the army and your reconnaissance leads him to believe his force is insufficient. He must return to Bit and muster a larger force. Some of the rescued villagers signed up for army duty and revenge immediately. Others were taken to Bit which can handle the influx of refugees better than the outlying villages.

Accompanied by Everett's father, you trekked back to Bit with a group of 200+ displaced persons.

Though the high summer festival was over by a couple weeks, the town of Bit still celebrated the heroes of the swamp's return. Everett, Perin, Swithun, Surina, Brother P, Drake, and Fitz all were given a heroes welcome. Several bard's already had songs about the liberators of Leed's Crossing. At the Tillerson estate, some of the group were reunited with Zadolix, Keth, and Valdral.

Over the course of a few weeks, the Tillersons and Greygours conscripted a larger force and head off into the swamp. Everett accompanied them (perhaps some of you did too). When they got to Ss'slass, the village of friendly Lizardfolk, they are greated with friendship and are told Ariamhodary's forces have retreated deeper into the swamp. The army reaches the abandoned mining camp a day later. At Everett's suggestion, a trench is dug from the pit to the water's edge so the water's of the swamp can fill the mine, rendering it more difficult to make use of.

The army returned to Leed's Crossing by mid-Adan, dispersing temporarily for the autumn harvest. By mid-Palient, the army in Leed's Crossing remained ready for any incursions, though, at this point it is assumed nothing will happen as winter approaches.

Bit is quiet once again. It is the seventh day of Toraya and plans for the upcoming Winter Festival are subdued this year. Some of your old friends have drifted away again. And during the interim, new friends have been made. (New PCs can explain how they made themselves useful.) The Tillersons have set any of you who want it with small residences in the Market Downs district. Two room flats above shops or separate three room houses whichever you prefer. Everett use to visit often but he finds he does not have the time as much any more. (His father discovered he wasn't just a drunk carouser and has put him to work.)

Increased encounters with elves of the Groaning Forest have made people say various things:

Ariamhodary's fate is the source of many a rumor:

Raina Rillstone, granddaughter of the old man, was found dead a few days ago. No can confirm this.

Eliana Puth'Sayol has disappeared. Rumor is she ran away rather than marry a nobleman in Cade-Crable.

An update to the Bit "local area" map: 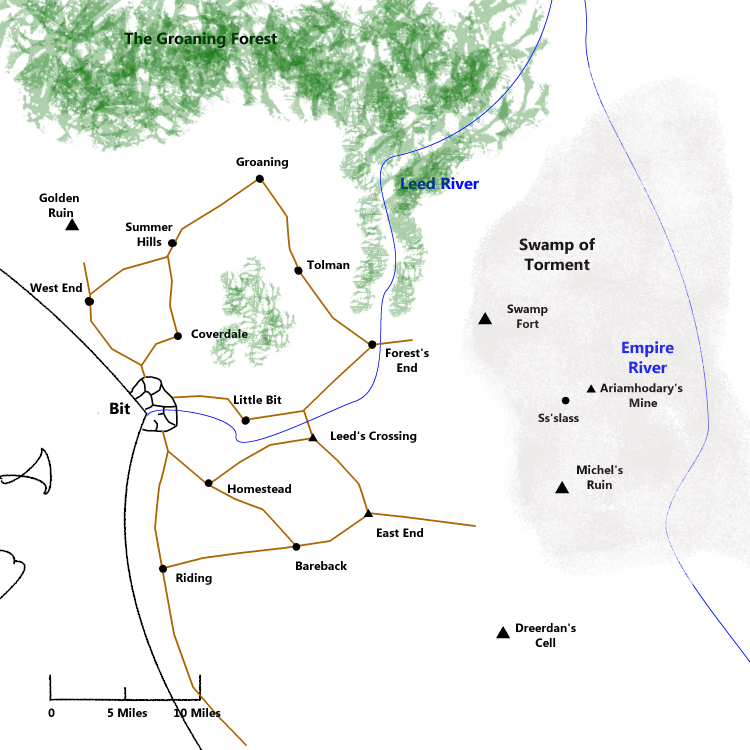 It's been two weeks since the fall harvest festival. Things are quiet again. Food prices are a bit elevated. The heroes have dispersed somewhat. Everett is hard to find these days. Some of you can still be found in Bit. Lately you have probably been hanging out in the market district where some of you now have permanent places to live.