[h=1][/h]The Judge Dredd & The Worlds of 2000 AD tabletop roleplaying game Kickstarter has just two days left to run! But the news doesn't stop coming - we have some more interviews, and a big preview of the various "Case Files" (short adventures) in the core rulebook. 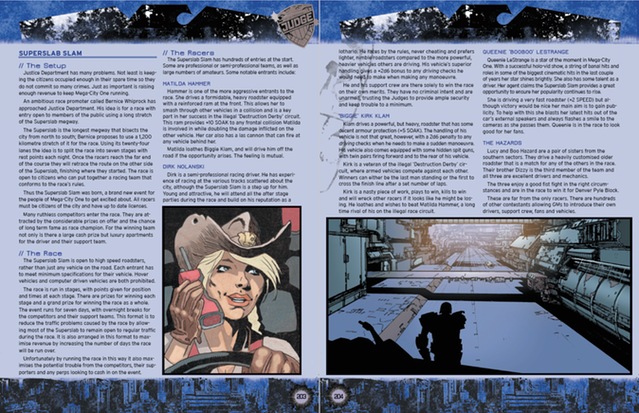 As we enter the last few days of the Kickstarter, there's a couple more interviews to check out!


There's just two days left to back the Kickstarter!
[h=1]Crime Blotter[/h]The Judge Dredd & The Worlds of 2000 AD core rulebook contains a chapter called "Crime Blotter". These Case Files are short vignettes that provide the Game Master with various Judge Dredd scenario plots for their players. Where possible we have tried to give you guidelines to run these adventures for Judges, Perps and even Citizens — some of them are better suited for some types of groups than others. While the Quickstart adventure State of the Empire is deliberately very simplistic, these Case Files feature a variety of adventures, from action to investigation, all highlighting 2000 AD's trademark black humour and dark satire.

The Munce Bunch
This scenario revolves around the generic foodstuff known as munce. Grown on farms on the Cursed Earth, Munce is a highly nutritious foodstuff and can grow in poor soils, even mildly radioactive ones, for it will not absorb the radiation. Raw munce has a foul taste and smell and it needs to be processed to become edible. Many munce products taste rather bland and the various forms of food are tolerated, rather than liked, by the citizens.
In this scenario a group of food scientists have found a way to flavour munce so that it tastes extremely good. This is a potential goldmine for corporations as the process is worth billions. They would be willing to pay a group of perps to steal the secrets in an act of industrial sabotage.

A group of Judges will be called in to investigate a break-in at the scientific labs where the munce products are being tested. Perps have a chance to make a quick killing if they can get past security and grab the NuMunce.

Drokk The Block!
The perps of Mega-City One are, if nothing else, creative in coming up with new ways to break the law. One such talented criminal is Milton Bilton, part mobster and part wannabe vid director. Milton has been a minor (and undetected) player in the vi-vid scene (vids featuring acts of violence that are often fatal for many of its unwilling stars). Now he has come up with the ultimate in the genre – a block war recorded in all its glory.

For several weeks now Peter Fonda Block and Dennis Hopper Block have been staring daggers at each other across the inter block plaza. Both Citi-Def forces are twitchy and the whole situation is on a knife edge. Just one spark would be needed to set a block war raging and pit the two neighbours in a fight to the finish; such rivalry is not uncommon in the city. In this case it is Milton’s efforts that have caused this upsurge in mutual hostility, setting the two blocks at each others throats.

Milton’s plan is almost ready. He has already put the pieces in place for his new show which he intends to broadcast over a pirate vid network. Welcome to Drokk the Block! He has spent much of his fortune employing hackers to infiltrate both buildings’ security, especially automated defence controls and cameras.

What goes on in both blocks Milton sees, hears and can record. The payoff for Milton’s plan is just about ready. He needs to precipitate the conflict, setting the two Blocks against one another. Then he can film the whole thing, playing it live on his new channel.

Drokk the Block! is ready to begin!

This scenario is primarily for Judges, but both perps and citizens can find themselves caught up in the block war. The Judges will have to contend with the plans of the mob boss in his headquarters and the two warring blocks as they attempt to restore order.

The Fast-Bank Farkers
Corporations are always looking to get an edge on their competitors in Mega-City One and banks are no different. The latest innovation, Fast-Banks, has caught on like wildfi re with the citizens. Instead of catching a zoom or hoverbus you can instead hop on to a Fast-Bank and do all your finances en route. This is especially useful if you want to withdraw some credits for your day out.

This scenario has options for Judges, perps and citizens. Judges will be tracking down an illegal Fast-Bank operation being run by an ape gang. Perps will be looking to rob a smaller Fast-Bank for some easy cash. Finally citizens will be trying to keep from being shot during a bungled robbery.

Scarred City
This action packed scenario is for a group of Judges or perps and involves the Mega City 5000. This is an annual, illegal and deadly motorcycle race that causes carnage on the streets in Mega-City One. The race attracts many of the city’s outlaw motorcycle gangs as competitors.

Every year, rival gangs gear up and plough through the streets in a festival of violence and speed, ultimately to prove which gang is the greatest. It is an event that strikes fear into the hearts of citizens and always stretches Judges’ resources to the limit. While the race violates innumerable laws, the havoc it creates also sets the stage for additional crimes of opportunity. Anyone wanting a diversion has one of the best possible while the attention of Justice Department is otherwise occupied.


For a gang called the Scars, this is exactly the plan. Although the Scars will be entering the 5000 they have ulterior motives besides trying to win the race. They hope to bust out their former leader from the infamous prison, Devil’s Island. Needless to say, winning the Mega-City 5000 in the process will score the gang some major street cred to boot. Reputation is everything.

If playing this scenario as a party of perps the Player Characters will be recruited by the Scars. They will be using the Mega-City 5000 as a diversion for the attempted prison break and free the Scar’s incarcerated founder, Max ‘Hobo’ Sanchez.

A group of Judges will be part of the task force assigned to put down the Mega-City 5000 once and for all, amid rumblings that something else is going down. Sure enough, they will quickly find themselves dealing with a prison escape and a deadly high speed pursuit.

Superslab Slam
Justice Department has many problems. Not least is keeping the citizens occupied enough in their spare time so they do not commit so many crimes. Just as important is raising enough revenue to keep Mega-City One running.

An ambitious race promoter called Bernice Whiprock has approached Justice Department. His idea is for a race with entry open to members of the public using a long stretch of the Superslab megway.

The Superslab is the longest megway that bisects the city from north to south; Bernice proposes to use a 1,200 kilometre stretch of it for the race. Using its twenty-four lanes the idea is to split the race into seven stages with rest points each night. Once the racers reach the far end of the course they will retrace the route on the other side of the Superslab, finishing where they started. The race is open to citizens who can put together a racing team that conforms to the race’s rules.

Thus the Superslab Slam was born, a brand new event for the people of Mega-City One to get excited about. All racers must be citizens of the city and have up to date licenses.

Many ruthless competitors enter the race. They are attracted by the considerable prizes on offer and the chance of long term fame as race champion. For the winning team not only is there a large cash prize but luxury apartments for the driver and their support team.


[h=1]Further Case Files[/h]In The Robot Wars there are two larger adventures, "The Robot Wars" for Judges, and "Saving Matt Damon Block" for perps/civilians (and the latter is part Robot Love Story!) However, that's not all. The Robot Wars also includes short overviews of various early Dredd case files in 1-2 page spreads which we call "Case Files". They detail how Dredd dealt with the situation in the comics, before talking about approaches GMs can take to running them with a party of PCs. These can be used as short interludes in between larger adventure, or even inserted into larger adventures.
Other "Case Files" include a range of adventure styles covering Progs #3-#8: 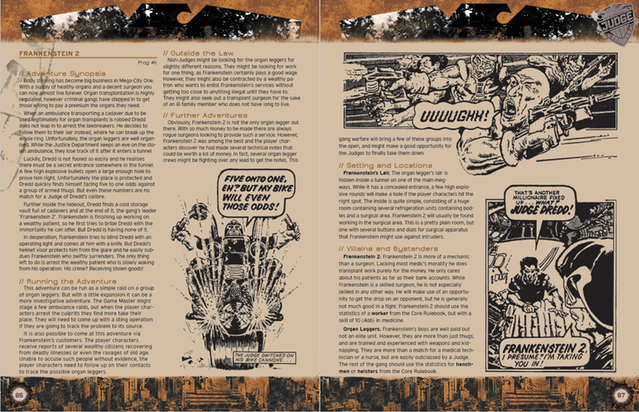