I’ve known the creator of Kids Arcanum since before the company’s inception, so when Mike Best released a Kickstarter to introduce kids to role-playing, I jumped at the opportunity to back the Crafty Quest Box. I was not disappointed. 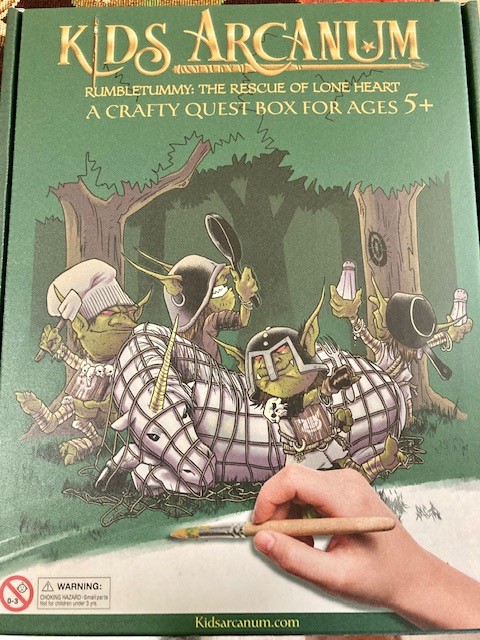 The Crafty Quest Box is a five-part adventure story that uses the language of fantasy role-playing games to introduce kids to basic tabletop elements, while at the same time giving them fun crafts to keep them entertained for hours. It’s essentially one long character creation session, but with some crafting and terms like “bonus XP” thrown in.

The Crafty Quest is actually five quests. Although it’s positioned as being for one child of ages five or up, I easily used one box for both my 11-year-old daughter and 13-year-old son. You’ll just need to photocopy some of the included pages. 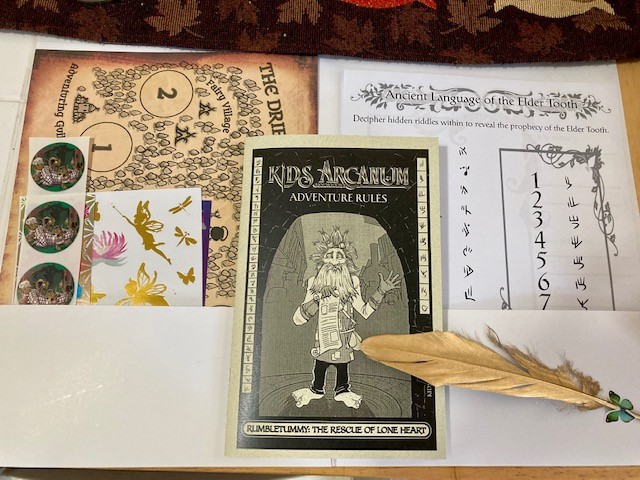 Task One: The Adventuring Guildhall​

The adventure begins like every good game does, at a guildhall. Their first step is to fill out their character sheet in the Realm of Faelorne. The character sheet asks for basic storytelling elements like their name, where they’re from, their class, their powers, and what they’re known for.

My daughter named her character Hailey from Oz (I’m working on a Wizard of Oz conversion for Fifth Edition so my daughter is quite familiar with the Oz series), who is known as a powerful warrior with light, ice, and fire magic. My son named his character Bryan from Nevada, a janitor with the ability to clean anything and everything. He’s best known for cleaning up the aftermath of “Nevada’s many battles.” If you’re noticing a pattern between my kids, that pretty much sums them up.

The plot involves a golden feather from the Lindrius Bird, which is included and makes a great tabletop prop. The mythical woods known as Driftwood Timber are protected by the golden bird, and only its feathers can provide passages to the woods. The Timber is normally concealed by fairies known as Faelindrius—with the feather released into the mortal world, it’s clear the Timber is in trouble. In the story, our heroes are chosen by the Lindrius bird to go on this quest.

But before they do, they need to equip some potions. This involves mixing liquids in a cauldron and depositing the end results in three vials, along with some colored tablets. It’s worth noting that because the cauldron is black, you can’t actually see the colors of the liquid in the cauldron, so you’ll need to mix them in a different cup. My kids, not surprisingly, associated red with healing and blue with magic (we play a lot of video games) so that’s what they mixed.

Although it’s not mentioned in the booklet, the Crafty Quest Box is meant to be played with at least one adult. This is clear in the expository text that’s presumably meant to be read aloud; it’s not something little kids are going to be able to read on their own. My kids are accustomed to my Game Master voice, so this was a natural fit, and acts as a great primer for playing tabletop RPGs with them in the future. In fact, the entire Crafty Quest Box can act as a character development exercise for a future game of Dungeons & Dragons. Well, my daughter’s character at least.

All told, this craft took an hour. Character creation took some time as my kids debated on what to put down. The potion mixing went a little quicker, but coming up with what each potion represented took longer. 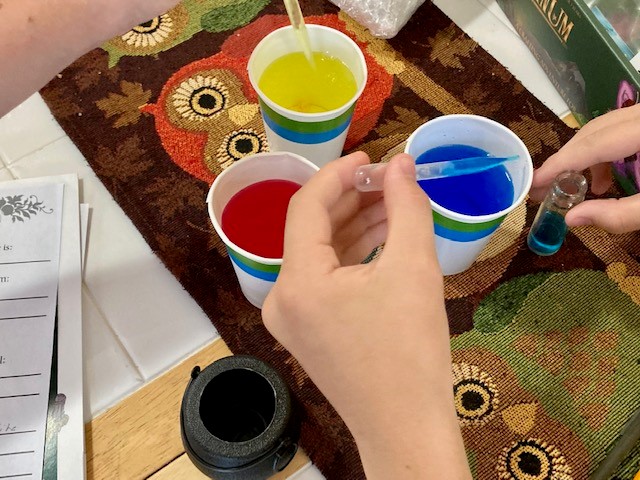 The adventurers leave the Guildhall to find the Driftwood Timber, guided by the golden feather. To their surprise, they discover that Grumpy Thump the ogre stomped the village and turned the fairies to stone. Led by glowing Lindee Wisps, the heroes must release the fairies from their stony prison.

Like any good familiar, these fairies take a bit of work to get out. It involves a Dig It Up! Egg. My son did most of the hammering to chisel out the fairy and my daughter did the cleanup. Then they got to work on their fairy character sheets.

My daughter named her fairy Dorothy. She’s colored light blue and is funny, kind, and cautious. Her special power is that she can cause plants to grow rapidly. My son created Tricky the Clown, a crazy red fairy who blasts music.

With the fairies free from their stony prison, the heroes then make a fairy home, which consists of fairy moss, bloom flowers, shiny gems, and a LED light that cycles through the rainbow. It’s another great prop that can be used creatively in any tabletop game.

Like the first task, the second task took about an hour or so. Most of the time was spent freeing the fairy and coming up with its background. It doesn’t take long to create a fairy home with the included materials. 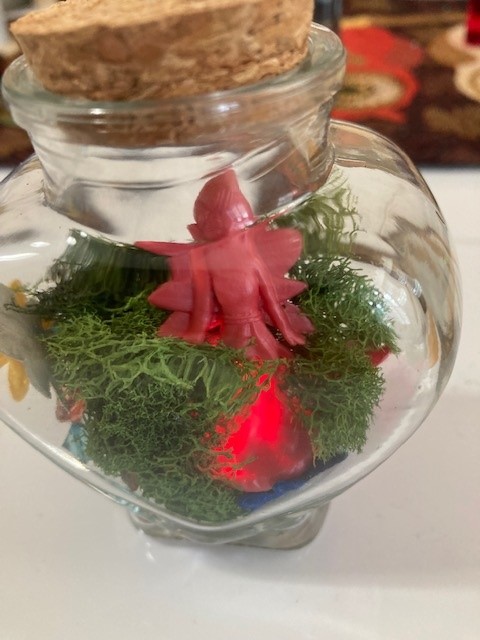 Things get real in task three, in which hundreds of goblins hold Lone Heart the unicorn hostage … and unicorn is on the menu!

This task involves creating a magic wand. My daughter created a wand named Blast that shoots light, ice, or fire with the command word SPARKLES! Two wands are included (a stretch goal from the Kickstarter) along with a set of paints; my daughter painted one wand as a test and then made a second one because she didn’t like how the first came out. My son left the wand creation to my daughter.

Like the other creation steps, it takes more time to come up with what the wand actually does than to paint it. Unlike the other character elements, this is the least applicable to a tabletop session as players don’t normally create wands for their 1st-level characters 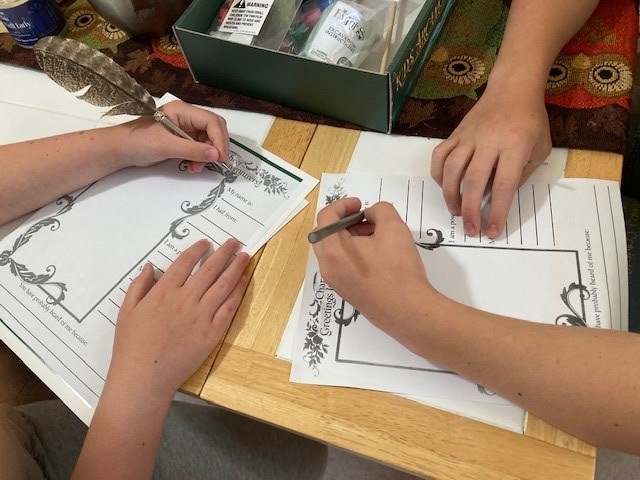 Having vanquished the goblins with their wands, our heroes follow Lone Heart to the Pond of Divination. This pond will explain where the Lindrius Bird has fled. But there’s a problem, because the path to the Pond is guarded by a snackalot, “a ferocious beast who has the head of a dragon, the body of an elephant, and a huge belly ready to be filled up with more adventurers! The Snackalot is known to enjoy a good story, though.”

There are two story scrolls rolled up win the Crafty Quest Box that are excellent props for any tabletop game. The box includes stickers and markers to draw on it, telling a tale to sate the Snackalot so they can pass.

Both of my kids illustrated how they freed Lone Heart from the Rumbletummy Goblins. My daughter’s comic involved a goblin “poof!”-ing out of existence. My son’s involved massive goblin slaughter. Even with their stories, there was plenty of scroll paper leftover. I kept it for a future adventure.

There is also an accompanying Elder Tooth alphabet that kids can use to create a secret code in their stories. I love the idea, but it’s probably beyond the reach of little kids. It’s a great cipher for use in other games though, and the unique font is befitting a dragon language.

This task can easily take an hour depending on your kids’ creativity. Mine were focused on just telling a specific tale, but there was plenty of room on the scroll for much more 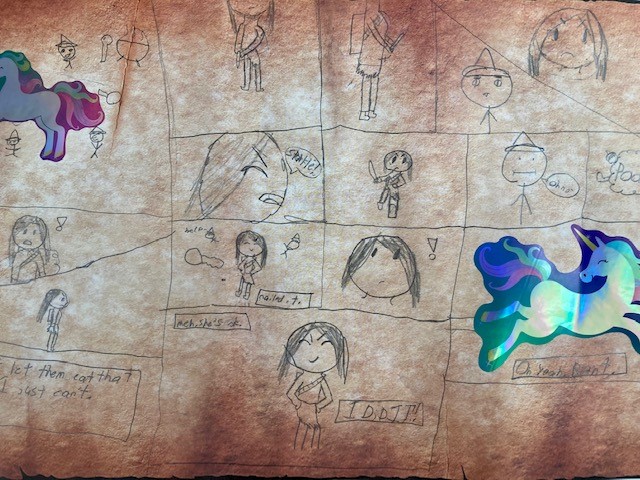 Our heroes finally reach the Pond of Divination, only to discover that it only works for unicorns. Using the included markers and mask, it’s up to our heroes to color their own unicorn mask and wear it as they gaze into the pond to learn the whereabouts of the Lindrius Bird.

If some of the tasks were better suited to older kids, this one is definitely for the younger set (there was no way my son was going to put on a unicorn mask). My daughter enjoyed coloring the mask, but it went quickly, a half hour at most.

The adventure wraps up with the heroes discovering the location of the Lindrius Bird, without actually retrieving it. Instead, they discover a gold dragon with the Bird that is need of help. And with that, the Crafty Quest Box sets up our heroes for a sequel 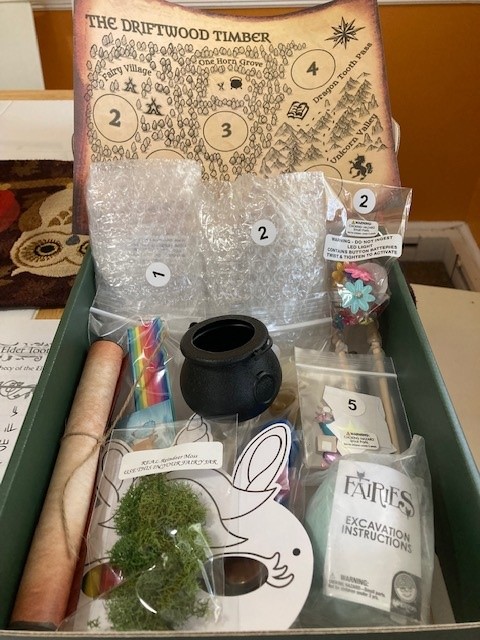 If I were to take the three of us to a movie at $20 a person (including ticket, drinks, and snacks), that’s $60 for two hours of entertainment. At $40, this set includes enough content to keep two kids occupied for about 4.5 hours. That’s nine hours of content in total that doesn’t involve screen time.

More important, this is a great introductory set for kids too young to play tabletop games but eager to be introduced to similar fantasy tropes. With one adult as the game master, it helps kids think about what their characters, companions, and magic items might be like—and then tell a great story about them. Beyond getting them accustomed to tabletop game elements, it also helps them develop their storytelling skills. It’s like a future game master primer in a box.

Is it worth the price? I think so. I bought two additional boxes for my nephew and family friends. You can purchase this box at Kids Arcanum’s web site.
Last edited: Jul 23, 2021
Click to expand...

Nice! My daughter would eat this up! She's 3.5 years old, so I'll probably pick one up and keep it for a year.