TTRPG digital tools site Demiplane, which currently supports Pathfinder, World of Darkness, Free League and other popular game systems and companies, has announced that it will also be supporting the upcoming Marvel Multiverse Role-Playing Game. You can pre-order the playtest book from them for $9.99 next week.


Welcome to the Marvel Multiverse Role-Playing Game NEXUS on Demiplane! Preorder the Playtest Rulebook to dive into all the rules, heroes, powers, traits, origins, professions, and more in the Digital Reader and Game Compendium next week on April 20th!

Demiplane is a digital tools site whose team includes Adam Bradford, one of the co-founders of D&D Beyond. It aims to support a variety of TTRPG game systems. 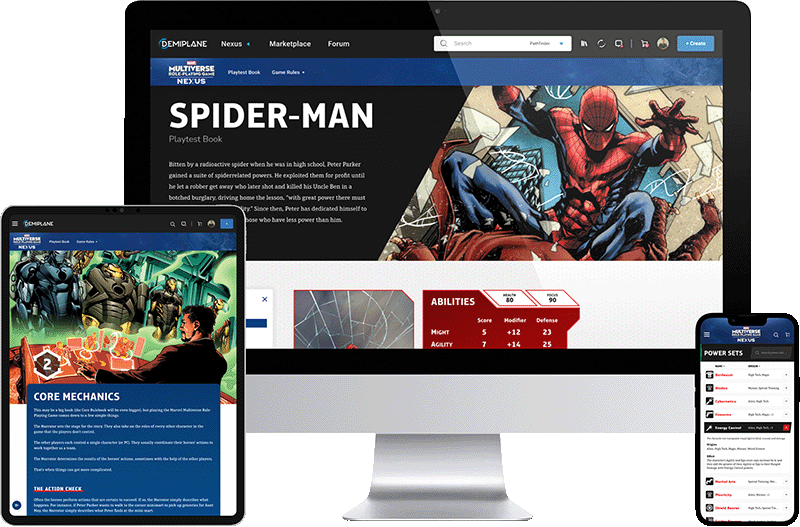 The Marvel Multiverse Role-Playing Game NEXUS makes creating your own Super Hero saga fast and easy. Players have access to the full digital content, legendary Marvel Super Heroes, and game mechanics from the Playtest Rulebook, including global search, advanced filters, and interactive tooltips designed to let you find everything you need during your tabletop role-playing sessions. The Digital Reader and Game Compendium are perfect for any way RPG fans play: in person with friends, or virtually online. The platform also enables users to host and discover games, find players, keep track of game sessions, and interact using video and voice chat. The first phase supports the 120-page Playtest Rulebook designed to give a heroic Marvel RPG experience while providing the opportunity to shape the full release of the game through ongoing feedback.

"As a True Believer for as long as I can remember, the Marvel Universe has had a massive impact on my life – I doubt I would be doing what I’m doing today without being a Marvel fan,” said Adam Bradford, Chief Development Officer at Demiplane. “With two of my greatest loves colliding in Marvel and tabletop role-playing, I can’t wait for fans to experience this level of digital support from the very start of the playtest with the Marvel Multiverse Role-Playing Game NEXUS."

"With the upcoming release of the Marvel Multiverse Role-Playing Game: Playtest Rulebook, the Marvel team is so excited to extend our new role-playing game to an immersive digital experience," said Carlos "CJ" Cervantes, Jr., Project Lead of the Marvel Multiverse Role-Playing Game. "Working with a partner like Demiplane helps us offer high-quality digital tools that will make the playtest as accessible and convenient for players as possible. We can't wait for fans to dive into the game for themselves!"

Demiplane is an online platform that provides tabletop RPG players a home for digital tools, content, and services to discover and play their favorite games. It is an ever-expanding experience that brings fans of tabletop role-playing together in one place to make playing games better—including the upcoming official digital toolsets Pathfinder NEXUS, World of Darkness NEXUS, and Free League NEXUS.
Click to expand...

This is one of the good things that’s happened!

Very excited. I am intrigued by the game mechanics...

Looks like the art direction, layout, and graphic design are top-notch.

Twitch is the world's leading video platform and community for gamers. 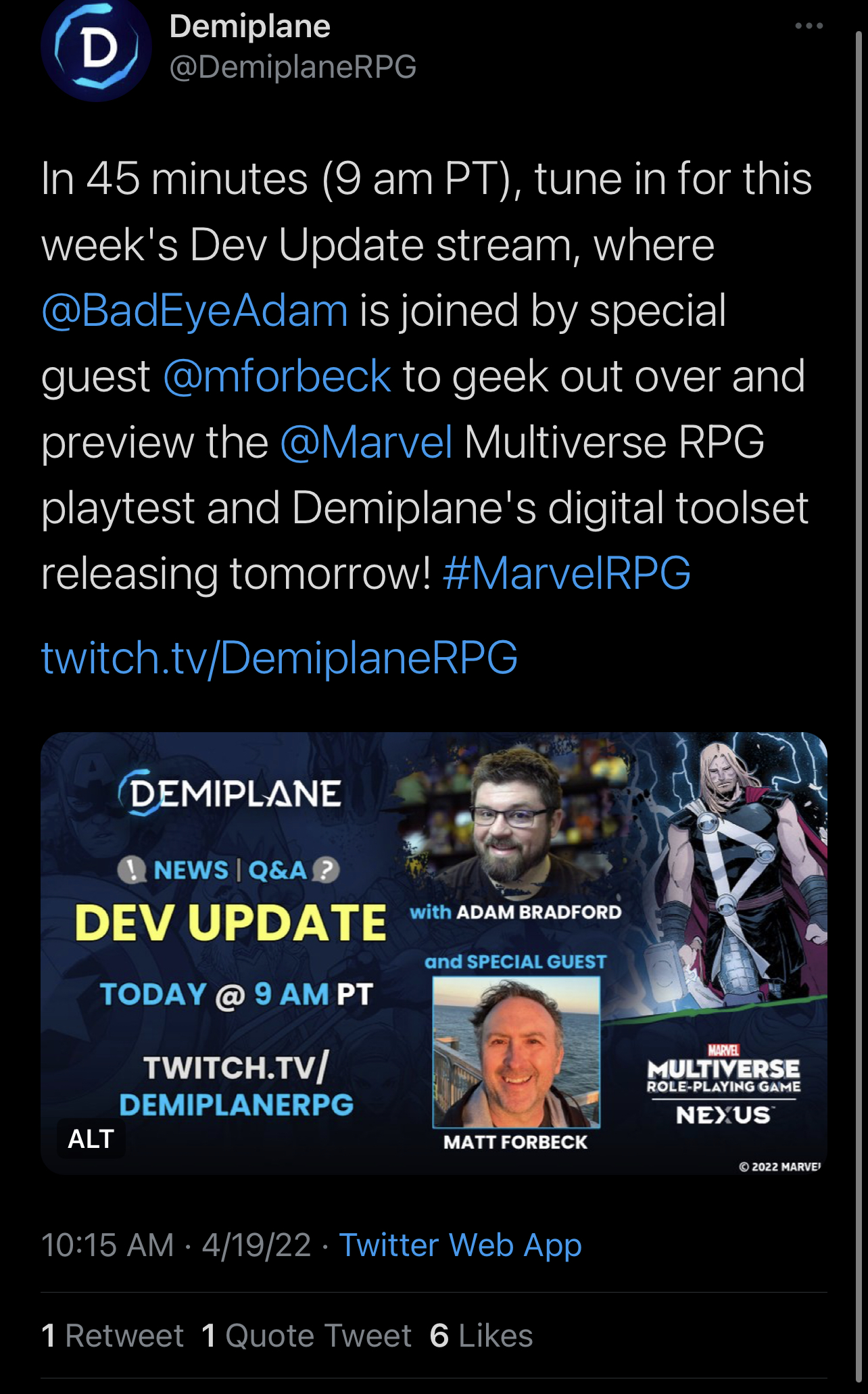