This is a series of articles about specific monsters from D&D’s history. Each entry takes a look at the origin of one D&D creature, and tracks its appearances and evolution across different editions. This entry covers one of the creatures associated with the Trickster Gods of Omu in Tomb of Annihilation: the zorbo. It originally appeared along with a number of other creatures in a combined Tomb of Annihilation article.​
Origins
While there isn’t an authoritative source for the zorbo’s inspiration, it is hard not to make a connection between the zorbo and the Australian urban legend of the drop bear. The drop bear is a vicious, carnivorous relative of the koala that plummets from treetops to attack unsuspecting tourists walking below.​ 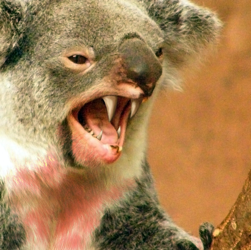 Drop bear, image from Wikipedia​
Although it is completely fictional, the drop bear’s description closely matches the marsupial lion (Thylacoleo carnifex) that lived in Australia during the last ice age. It was a skilled climber and still living when the first hominids arrived in Australia some fifty thousand years ago, so it was almost certainly encountered by early humans before going extinct.​
1st Edition
The zorbo’s first appearance is in the 1982 “New AD&D Aid” Monster Cards. Each pack contained a set of twenty monster cards, with stats and a description on the back, and a full-color illustration on the front. Most of the creatures were from the Monster Manual, but each set also had some new monsters, including the zorbo in set 1. According to Dragon #61, credit for the zorbo goes to Allen Hammack.​ 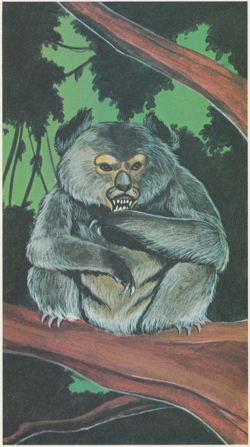 Monster Cards, Set 1 (1982)​
Although it isn’t actually described as a koala with large teeth and claws, the zorbo sure looks like a koala with large teeth and claws. It is carnivorous and enjoys eating humans and demihumans. It is a small (3’ tall), semi-intelligent beast that attacks with two claws. Up to four zorbos can be encountered together, and they may have coins (likely silver), gems, potions and perhaps a miscellaneous magic item. They are rare creatures, found in a lair 30% of the time. Despite their aggressive tendencies, zorbos are of neutral alignment.

A zorbo has 4+2 hit dice, an armor class of 8 and a movement rate of 15” (or 9” while climbing). In combat, the creature’s claw attacks initially do a feeble amount of damage, just 1-2 points. The zorbo’s special trick is that it can absorb the armor class of its natural surroundings, or from opponents’ magic items, destroying such items in the process. This new armor class lasts 10 rounds, and also gives the zorbo a corresponding damage boost. Almost a third of the description is spent on an overly complicated example of this ability.

The zorbo was reprinted in the Monster Manual II with new artwork, still resembling a koala. It now has a base armor class of 10, instead of 8, and it has gained 20% magic resistance, but the description and stats are otherwise unchanged.​ 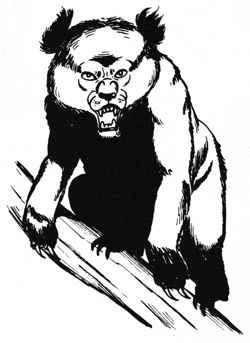 Monster Manual II (1983)​
2nd Edition
The zorbo resurfaced quite late in the run of 2nd Edition monster supplements, appearing in the Monstrous Compendium Annual Volume Two, looking more like a koala than ever. Although it is depicted as gray, the description says that the zorbo is black and white. As with many of the Monstrous Compendium entries, the expansion of the description to a whole page is a mixed blessing. A full half of the text is again spent on a complicated explanation of the armor class absorption process.​ 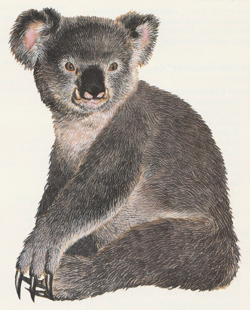 Monstrous Compendium Annual Volume Two (1995)​
The absorption process is split into two. A long tem (1-4 hour) armor class boost is gained when the zorbo interacts with its environment. This process takes one round and, delightfully, is visually similar to a bear scratching its back on a tree. The process doesn’t harm the object; the absorbed armor class ranges from 7 (for earth) to 0 (for stone) and lasts for 1-4 hours. A zorbo can also boost its armor class by absorbing defensive magic belonging to those it attacks. Shields, armor, bracers, cloaks, rings and miscellaneous magic items that grant an armor bonus are all fair game and this process is destructive, turning the item instantly to dust (with no save), unless it is an artifact. For one turn after draining it the zorbo gains an additional bonus to armor class and saves based on the strength of the item.

From the statistics block we learn that the zorbo can be found in any non-arctic lands. It now has a base armor class of 7, and it has a steady morale. The absorption power no longer gives any bonus to the zorbo’s damage, but it has three attacks: two claws (each doing 1-4 damage) and a bite (1d2 damage).

We learn that although they prefer human and demihuman flesh, zorbos will eat other meat, fish and even berries. They lair in small caves, hollowed out trees or dug-out holes. Despite being listed as solitary, zorbos form small family units with life-long mates and one or two young from previous years. The young are usually chased away after two years, but occasionally, large communities of up to 60 zorbos form. Such settlements usually arise in particularly threatening environments, and are guarded by sentries. These sentries primarily watch for threats to the community, but if a suitable target passes by, will occasionally signal for an attack, causing the entire population of zorbos to swarm the target.​
3rd Edition
The zorbo skipped two Editions of D&D entirely, but there is a 3rd Edition version in ENWorld’s Creature Catalog.​
5th Edition
Tomb of Annihilation drops all pretense and just describes the zorbo (ZOR-boh) as similar in size and appearance to a koala. Amusingly, the accompanying artwork is the least koala-like to date, giving the zorbo an understated menacing air. This version of the zorbo is loyal to the previous incarnations. It remains as fond as ever of human flesh although, like the 2nd Edition version, it is omnivorous.​ 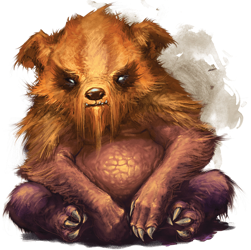 Tomb of Annihilation (2017)​
The zorbo has 27 hit points, and a base armor class of 10. It has both walk and climb speeds of 30 ft, and magic resistance. The signature armor stealing ability is a somewhat streamlined version of the 2nd Edition zorbo’s, with a natural armor absorption ability giving it an AC between 15 and 19, and a destructive claws attack which gives the zorbo a temporary AC boost. The claw attack does 2d6+1 points of slashing damage and can still destroy magic items, but with a slightly slower process of deterioration before they are destroyed. As is traditional, more than half of the zorbo’s stat block is spent explaining these armor class absorbing powers.

The Adventurers League scenario Winter’s Flame implies that at least some zorbos have stripes, as one of the challenges in the adventure involves counting the stripes on a moving zorbo.​
Zorbos and other monsters
According to the Monstrous Compendium Annual Volume Two, bears are a natural enemy of the zorbo, and will attack on sight. Speculation is that this is because the zorbo’s roar sounds like a bear cub crying.


Zorbo parts
According to Dragon #137, the young of a zorbo can fetch up to 4,250 gold pieces. According to the Monstrous Compendium Annual Volume Two, magic items made using zorbo hide are particularly receptive to enchantments, granting an additional +1 bonus to related saving throws. However, the hide must be soaked in holy water and the relevant item enchanted under a full moon for this bonus to apply.​
Zorbos and magic
Polyhedron #65 details an elixir of zorbo fingers which gives the imbiber the ability to gain the armor class of things touched.​
Forgotten Realms
In the adventure FRA2: Black Courser for the Horde subsetting, a lone zorbo (in this case described as resembling a panda bear) is having a rock fight with ten bakenmonos. The 5th Edition Tomb of Annihilation makes zorbos inhabitants of Chult, where they can be found throughout the jungle, favouring wukka trees.​

Obo’laka’s symbol, Tomb of Annihilation (2017)​
Obo’laka, the Omu god who takes the form of a zorbo, is nervous and obsessive. She is bitter enemies with I’jin, the almiraj god, who once interfered with Obo’laka’s cooking.​
Miniatures
The only zorbo miniature to be released to date was figure #4 in WizKids Icons of the Realms: Tomb of Annihilation set.​ 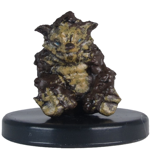 Icons of the Realms: Tomb of Annihilation (2017), image from MinisGallery​
Computer games
The Idle Champions of the Forgotten Realms game added the zorbo as a possible familiar in July 2020.​ 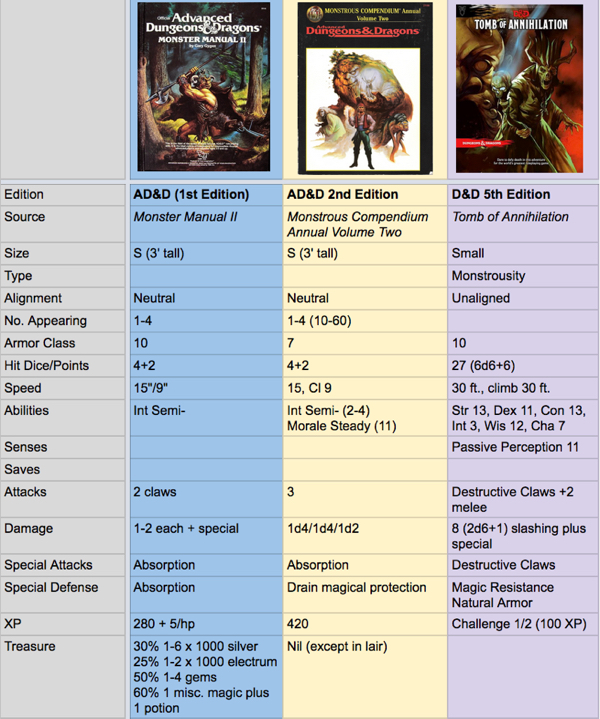 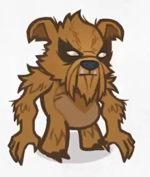 Idle Champions of the Forgotten Realms promotional image (2020)​
Other ENCyclopedia entries
Visit the Monster ENCyclopedia index for links to other entries in this series.​
Last edited: Oct 26, 2022

Thank you as always for these articles Ecohawk! Are you reposting these? I see the date was June of this year and I thought it came out some time ago.

The zorbo is one of nine creatures that was originally covered in much less detail in a combined Tomb of Annihilation article. I split them up into their own articles, and updated each one to be a much more thorough review of the monster's history. So roughly 60% of the content is old, and 40% new.

Echohawk said:
The zorbo is one of nine creatures that was originally covered in much less detail in a combined Tomb of Annihilation article. I split them up into their own articles, and updated each one to be a much more thorough review of the monster's history. So roughly 60% of the content is old, and 40% new.
Click to expand...

OK, I wondered why I was getting all of these notifications of items I thought I had read! I will check them out.

There are some completely new entries in the pipeline, but first I'm working my way through the existing ones and recovering the lost-in-the-last-forum-migration artwork and generally updating them. The T, U, W, Y and Z entries in the series are all in various stages of development though. V and X not so much yet, I keep changing my mind on which monsters to cover for those two.

Echohawk said:
There are some completely new entries in the pipeline, but first I'm working my way through the existing ones and recovering the lost-in-the-last-forum-migration artwork and generally updating them. The T, U, W, Y and Z entries in the series are all in various stages of development though. V and X not so much yet, I keep changing my mind on which monsters to cover for those two.
Click to expand...

well I look forward to what ever you decided to present!