I'm thinking of putting in a Hero Forge order for some minis of the most important or influential NPCs, from the War of the Burning Sky campaign path. I'm wondering what you all think are the most relevant or important characters to include? My initial thoughts, mainly considering the first two chapters...

Torrent seems to be very important. She has a notable presence throughout the first two and a half chapters, and could be relevant well into the story.
Both Kathor Danova and Rantle have small but important presences in Chapter 1, then show up much later as well. Most of the other Chapter 1 NPCs don't seem to be terribly important... MAYBE Diogenes?
Hadden and Crystin are present through most of Chapter 2, though mostly in a background role.
A generic Inquisitor would be a good choice, since they pop up repeatedly throughout the campaign.
Tiljan seems to be someone that could stick around for a while, though other Innenotdar characters like Papuvin, Vulh, Timbre, and Gwenvere might not warrant a mini.
Moving into Chapter 3, Katrina seems to be a clear choice for a mini, as does Three Weeping Ravens.

I'd definitely get Torrent, since she's key early on, though after adventure 3 she probably doesn't pop back up until the finale. Katrina is pivotal, though you could probably hold off ordering until you're closer to adventure 3. She can fight alongside the PCs in 3, and returns in 7 and 12 as either enemy or ally depending on the party's interactions with her.

An inquisitor would also be great. If you make a nice bear-skull mask design somehow, I'd love to see how it looks.

Torrent and Katrina are my main two choices early on.

I think my next goals will be an Inquisitor, Tiljann, 3WR, and Shalosha, then start thinking about other notable NPCs that hang around a while, like Rantle, Kathor, possibly a couple of the more notable Dasseni Lords, like Gallo. Currently, I'm not really thinking about outright villains, outside of recurring roles (hence, inquisitors), though it seems apropos that there should be a Leska at the end of it all.

(I decided to put Katrina in red, both to accentuate her powers, and to create a "well duh" moment when her real allegiances are revealed)

And a couple of Chapter 1 notables, Rantle and Kathor.

EDIT: And now the big bad herself, Leska...

Shaaladel and Shalosha join the party, along with humanoid interpretations of Trilla and Naizelasa (not that the latter would ever deign to take a lesser form, but you know, roll a Nat20 on Persuasion, and all bets are off)...

Ah, the dream of being able to play in person again. These look great.

Balan could potentially survive all of Adventure 4 (he did in my second campaign, but not the first -- the first was better in that regard). But mostly I just want to see a miniature with an accordion.

THREAD NECROMANCY! Since I'll be starting this campaign in real life, I decided to order the first couple of chapters' worth of major NPCs, in Hero Forge's acrylic standee form. Here's a couple from the very first encounter... Torrent and Kathor! 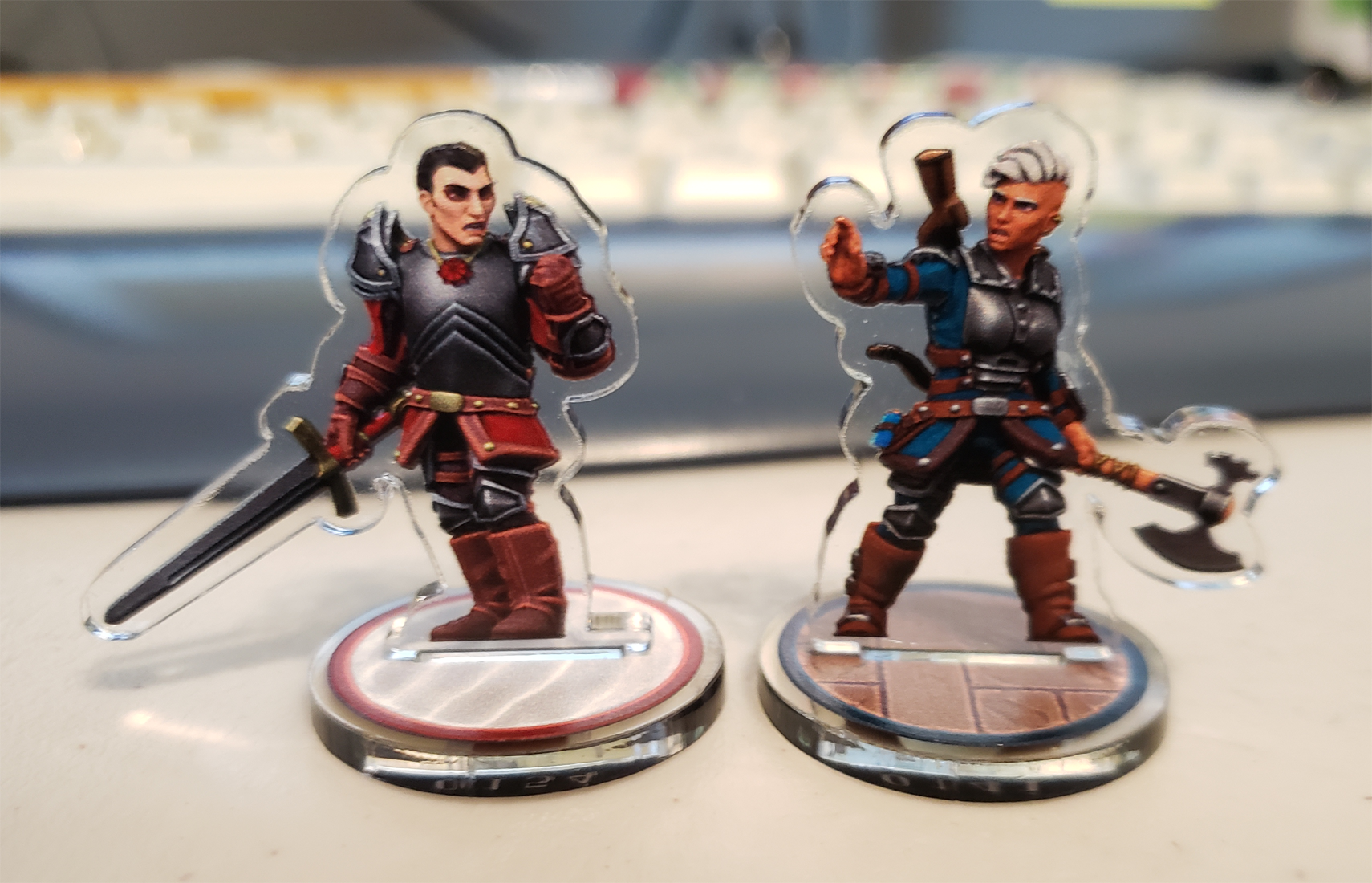 Please note, I am not affiliated with Hero Forge, nor am I being compensated in any way for showing these off. I just think it's a really neat product for people that want to present these characters in a more formal way, at the table...!

Here's a full shot of the figs I ordered... 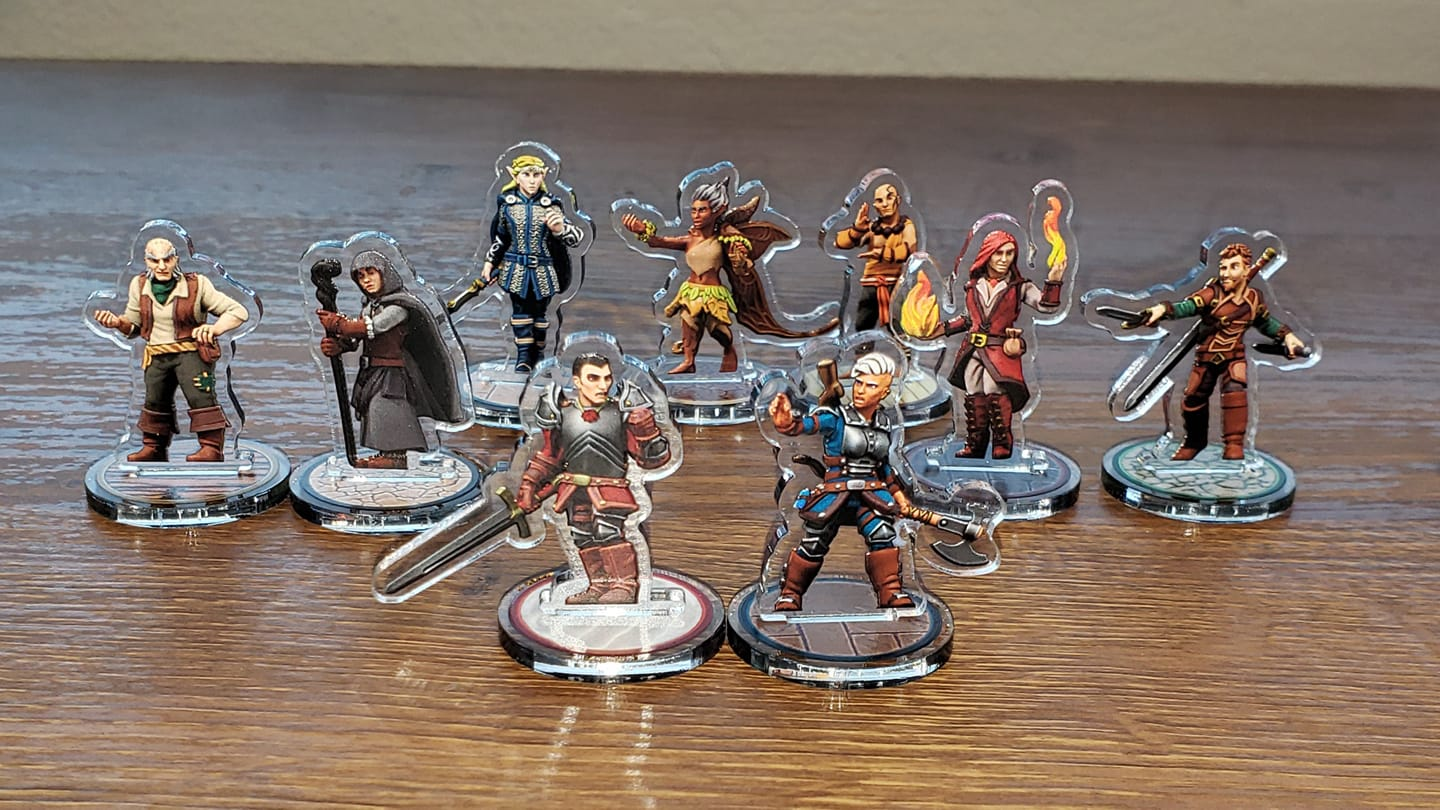 I've been toying with other characters to get the miniature treatment. Balan, here, was on the short list for me. I'm going over chapters 3 and 4 to see who else deserves a turn. Lee Sidoneth has a major role throughout Ch.3, but his story ends there. There's always the various residents of (and visitors to) Seaquen, like Sheena Larkins, Xavious Foebane, Simeon Gohanach, and Kiernan Stekart.

For Chapter 4, a couple of notable lords have roles that outlast the single chapter, like Duke Gallo, Lord Dashgoban, and Lady Timor.

In Chapter 5, Longinus and Pilus both seem like reasonable additions to the collection.

I'd also love to create a suitable multi-purpose Inquisitor, but there's nothing even close to an animal-skull mask in Hero Forge... yet.

EDIT: In lieu of a bear skull mask, do you think a bear-headed cloak would be suitable?

If I was doing this, I wouldn't necessarily spend money on NPCs that didn't get at least one real encounter, so a lot of the NPCs in the most recent list wouldn't be included as they are as likely to be running in any encounter as fighting. You could print a handout of NPCs and cut them into cards to give to the players when they meet important people rather than making a full mini.

That being said, the bear headdress works, and female inquisitors use a more ornamental mask which you could simulate using the mouthless head.

Tormyr said:
That being said, the bear headdress works, and female inquisitors use a more ornamental mask which you could simulate using the mouthless head.
Click to expand...

I decided to try a sort of "porcelain mask" look for the ladies... maybe?

I also decided to try my hand at the one who really kicked off the entirety of the campaign... Rhuarc Knightsbane and his shadow. I decided to give Rhuarc some subtle dark colors (navy blue, olive green, and gray tones) rather than just flat black, both for some visual interest, and for the fact that they actually are more useful colors when it comes to stealth.

J
[LFP][5E][Roll20][Sunday evenings EST] Enter The Mists: An Introduction to the Curse of Strahd - Free Game With Professional DM. Looking For Players