Today the Mythological Figures column is returning to Ancient Greece and once again we’re looking at a queen of the Amazons. This one however is infamous for being the only one to ever wed, and plays a part in not just the tales of Theseus but Heracles as well (although boy howdy is it up for debate as to how). We’re talking about Hippolyta! 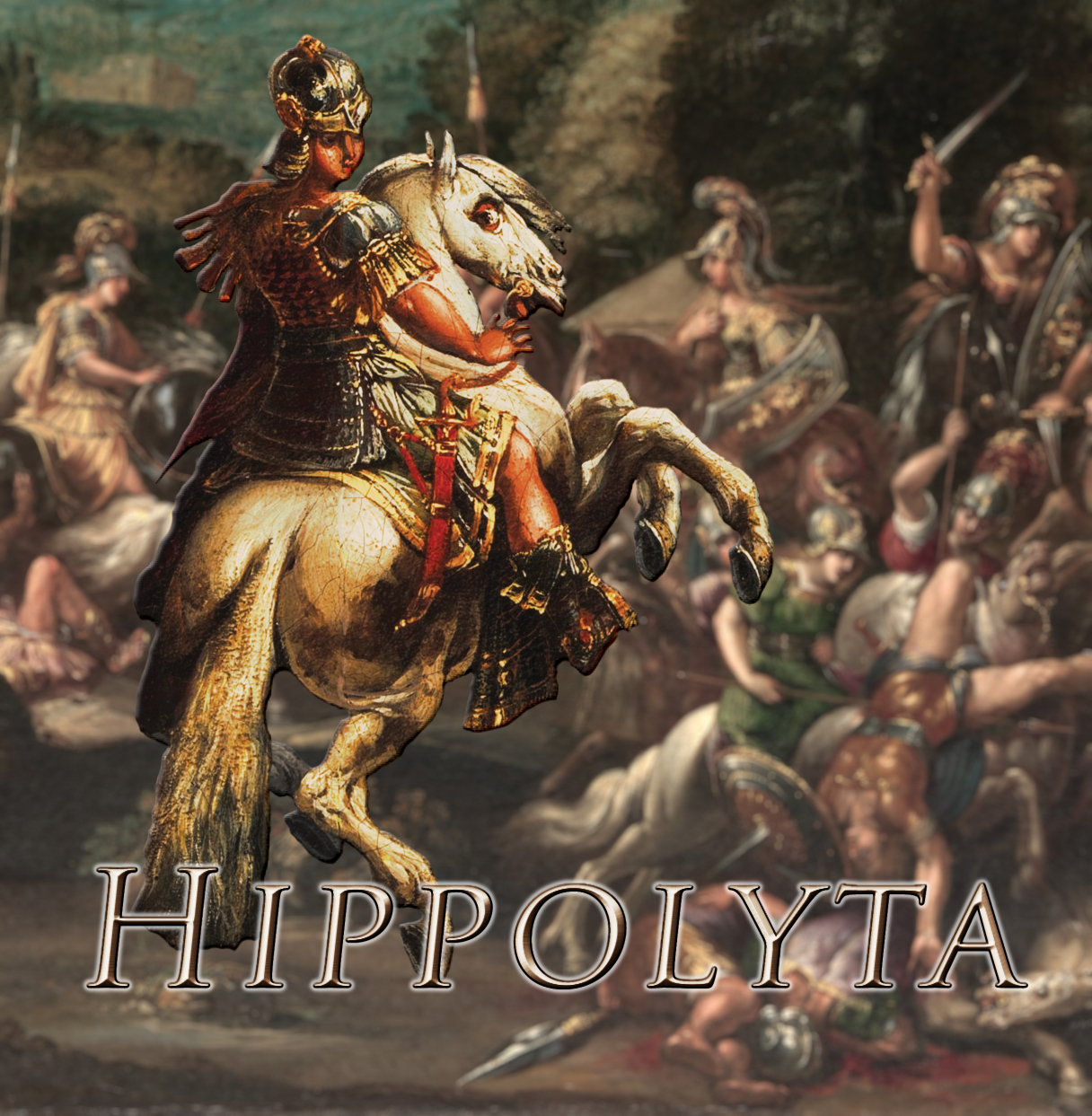 While she plays a part in several stories, there’s not much explaining who Hippolyta was or what she was about beyond her royal duties—and what there is changes from storyteller to storyteller and tale to tale. The start of her encounter with Heracles at least is straightforward and fairly consistent: Admete, the daughter of Eurystheus (king of the Mycenaean stronghold of Tiryns) wants the girdle of Ares worn by Queen Hippolyta. After some adventuring he and his crew sail to Themiscyra, and while Heracles is putting the charm on Hera goes about spreading nasty, instigating rumors that he’s kidnapped the Amazonian queen. The situation escalates into a full-fledged battle and in the chaos he slays Hippolyta, taking the girdle and then quickly leaving the island.

Then we get to the Theseus business. Was he on the same expedition as Heracles? Was it earlier or later? Did Heracles interact with Hippolyta at all? Did Theseus take her, or did Heracles abduct her and remand her to him? Did the two of them strike a romance so intense that she left her people for him? It really depends on who’s telling the tale. Generally it’s agreed that afterward she’s taken to Athens and marries Theseus, sparking of the Attic War—or perhaps not! Maybe he ditches her for Phaedra, inspiring the Amazons to crash the wedding and that’s where Hippolyta dies in this story. But who slays her? Theseus? Or was he fighting back to back with her when another Amazon named Molpadia strikes a killing blow, or even her sister Penthesilea (or maybe her sister kills her later). Or maybe it was another Amazon entirely or she doesn’t die at all and instead has a son with Theseus (of course because?) named Hippolytus. ¯\(ツ)/¯

Design Notes: Given how much of an enigma the actual woman is, I’m opting to focus on making Hippolyta as a classic Amazon warrior-queen able to do everything she expects of her warriors—and to me that means feats! She’s got them all—bopping people around with a shield, jumping and climbing, high combat mobility, great on a horse, can pen in opponents, and has excellent ranged prowess. For anyone doing the numbers, she just barely squeaked in at CR 9 thanks to the Blog of Holding Rubric (which put her at 9.4, averaging out with the DMG’s 8.75).

Background: Noble - Queen. Due to her position as a ruler, Hippolyta is treated with a measure of respect wherever she goes. She is treated as royalty (or as closely as possible) by most peasants and traders, and as an equal when meeting other authority figures (who make time in their schedule to see her if requested to do so).

Action Surge (1/Short Rest). Once on her turn, Hippolyta can take an additional action on top of her regular action and a possible bonus action.

Colossus Slayer (1/Turn). When Hippolyta hits a creature with a weapon attack, the creature takes an extra 1d8 damage if it’s below its hit point maximum.

Favored Enemy: Beasts. Hippolyta has advantage on Wisdom (Survival) checks to track beasts, as well as on Intelligence checks to recall information about them.

Feat: Athletic. Hippolyta can stand up from being prone with only 5 feet of her movement, climbing doesn’t cost her extra movement, and she only has to move 5 feet before making a running long jump or running high jump.

Feat: Master of the Shield. While she has her shield, Hippolyta adds +2 to Dexterity saving throws against spells or other harmful effects that only target her and she can use a bonus action to use it to shove a creature within 5 feet when she takes the Attack action.

Feat: Mobility. Hippolyta can Dash through difficult terrain without requiring additional movement. Whenever she makes an attack against a creature, she doesn’t provoke opportunity attacks from that creature until the end of her turn.

Feat: Mounted Combat. When Hippolyta’s mount is attacked, she can make herself the target of that attack. In addition, she has advantage on melee attack rolls when her target is an unmounted creature smaller than her mount (usually any unmounted target of Medium size or smaller). Finally, when Hippolyta’s mount is subjected to an effect that allows it to make a Dexterity saving throw to take only half damage, it instead takes no damage if it succeeds on the saving throw, and only half damage if it fails.

Indomitable (2/Long Rest). Hippolyta can reroll a saving throw that she fails but must use the new roll.

Natural Explorer: Forests. When Hippolyta makes an Intelligence or Wisdom check related to forests, her proficiency bonus (+6) is doubled if she is using History or Survival. While traveling for an hour or more in a forest, she gains the following benefits: difficult terrain doesn’t slow her group’s travel, her group can’t become lost except by magical means, even when she engages in another activity while traveling she remains alert to danger, if she is traveling alone she can move stealthily at a normal pace, she finds twice as much food as she normally would when she forages, and while tracking other creatures she also learns their exact number, their sizes, and how long ago they passed through the area.

Primeval Awareness. Hippolyta can use her action and expend one ranger spell slot to focus her awareness on the region around her. For 1 minute per level of the spell slot she expends, Hippolyta can sense whether the following types of creatures are present within 1 mile of her (or within up to 6 miles if she is in a forest): aberrations, celestials, dragons, elementals, fey, fiends, and undead. This feature doesn’t reveal the creatures’ location or number.

Remarkable Athlete. Hippolyta adds +3 to any Strength, Dexterity, or Constitution check she makes that doesn’t already use her proficiency bonus. In addition, when she makes a running long jump, the distance she can cover increases by 3 feet.

Second Wind (1/Short Rest). On her turn, Hippolyta can use a bonus action to regain 1d10+15 hit points.

Spellcasting. Hippolyta is a 4th level spellcaster that uses Wisdom as her spellcasting ability. She has the following spells prepared from the ranger’s spell list:


REACTIONS
Feat: Master of the Shield. Hippolyta can reflexively protect her body with her shield. When she is subjected to an effect that allows her to make a Dexterity saving throw to take only half damage, Hippolyta can use her reaction to take no damage if she succeeds on the saving throw.

I really like this one - thanks Mike! Hippolyta is also a great example of the twists and turns of greek mythology. Every version is a bit different.

Mike, when are you going to write up Hercules? I would consider that a must. Also, I am still waiting for the Lieutenant Colonel George Armstrong Custer write up.

Rafael Martin said:
Mike, when are you going to write up Hercules? I would consider that a must. Also, I am still waiting for the Lieutenant Colonel George Armstrong Custer write up.
Click to expand...

His list is long and you got in kinda late, be patient.

As for Heracles/Hercules ¯\(ツ)/¯. Definitely not within the next 2 months, I know that much (just finished the last post for November last night). Maybe before 2020!

dave2008 said:
Now of course we need a write up for the Girdle of Ares
Click to expand...

I was considering it, yeah. Like her the nature of that girdle changes a lot though--sometimes it's just a band of leather, sometimes it grants her great strength, sometimes it makes her "femine powers" (?) more potent (sooo +charisma?). I figured since it gets taken off her anyway just to keep it simple but if there's any definitive source for what it actually does I'm game to stat it.

You got me, I cannot top that!

As long as its a recent wonder woman all is good not the bondage fetish err... well never mind.

So, why not BM, rather than Champion, if you wanted her doing all kinds of cool moves on the battlefield?


Garthanos said:
As long as its a recent wonder woman all is good not the bondage fetish err... well never mind.
Click to expand...

...not that there's anything wrong with that!

@Mike Miller - OK here is a character to grind on ... James bond versatility like the Rogue and Hit points to make a fighter blush.

Mike Myler said:
Then we get to the Theseus business.
Click to expand...

Simple: all queens of the Amazons are called Hyppolita.

Quartz said:
Simple: all queens of the Amazons are called Hyppolita.
Click to expand...

All the Druids of Gael are Merlin

Garthanos said:
All the Druids of Gael are Merlin
Click to expand...

Indeed. You make assuming the name a tradition, in memory of the first queen. Just like Vlaakith.

One could make an heirloom that is past down which carries with it memories of the predecessors in 4e the item would grant memories of a thousand life times and something akin to an expanded spellbook feat. Could be flavorful and badass.