Finally an entry in Mythological Figures for a proper paladin: Huon of Bordeaux! 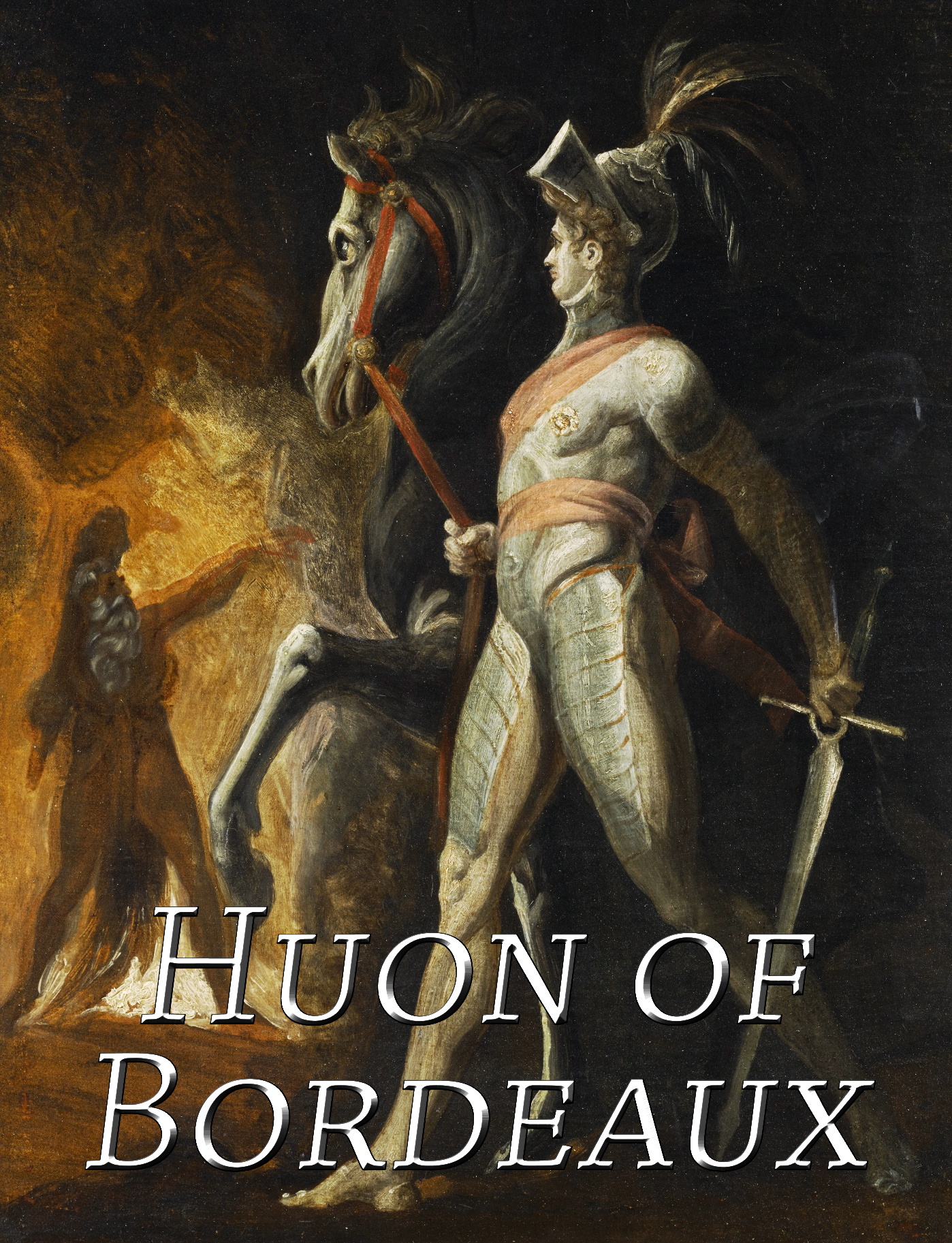 In a violent act of misunderstanding Huon (scholars think he was really the duke of Aquitaine, Hunald I) the son of Seguin (count of Bordeaux) ambushed and killed Chariot (thought to be Charles the Child, son of Charles the Bald and Ermentrude of Orléans) the son of Emperor Charlemagne. Of course depending on the tale and teller, Huon may instead have killed a count in the emperor’s palace. For the murder he is doomed to hang, but is offered a pardon if he can complete a set of impossible tasks. If he completes them all—including bringing back some of the emir (“prince”) of Babylon’s teeth (four great ones) and hair (specifically a beard), kissing the emir’s daughter three (or four) times, and messing about with giants—Huon will be forgiven and can reclaim his right to become the duke of Bordeaux. On his quest he meets and (against the counsel of others) converses with the Fairy King Oberon who helps him succeed at his tasks. The full details of his story are freely available here, but they are the usual stuff one would expect from a medieval knight finding his way.

Design Notes: For the first time in this long endeavor we have an actual paladin (one of Charlemagne’s top knights), but skimming the 120 pages revealed at least one mention of an Action Surge so we’re getting fighter levels into the mix. As far as enchanted things go Huon’s got a sword that certainly seems magical (it’s mentioned as one of three special swords but didn’t have any other obvious details so we’re going with +1 longsword) and more importantly the white harness, a hauberk that makes a virtuous wearer like him immune to exhaustion, drowning, fire, and the blows of “paynim” (a non-Christian, usually a Muslim). That last part seems a little much so instead we’ll just make it resistance to weapon damage. Let’s do the numbers! The DMG rates Huon halfway past 12 and the Blog of Holding at 13.83, averaging out to a confident CR 13.

Background: Noble. Due to his lordship Huon receives a measure of respect wherever he goes. He is treated as royalty (or as closely as possible) by most peasants and traders, and as an equal when meeting other authority figures (who make time in their schedule to see him if requested to do so).

Action Surge (1/Short Rest). Once on his turn, Huon can take an additional action on top of his regular action and a possible bonus action.

Aura of Courage. Huon and friendly creatures within 10 feet of him can’t be frightened while he is conscious.

Aura of Protection. Whenever Huon or a friendly creature within 10 feet of him must make a saving throw, the creature gains a +3 bonus to the saving throw as long as the Huon is conscious (included in his statistics).

Divine Smite. When Huon hits a creature with a melee weapon attack, he can expend one spell slot to deal radiant damage to the target, in addition to the weapon’s damage. The extra damage is 2d8 for a 1st-level spell slot, plus 1d8 for each spell level higher than 1st, to a maximum of 5d8. The damage increases by 1d8 if the target is an undead or a fiend.

Feat: Mobility. Huon can Dash through difficult terrain without requiring additional movement. Whenever Huon makes an attack against a creature, he doesn’t provoke opportunity attacks from that creature until the end of his turn.

Helm. While wearing his helm Huon gains advantage on saving throws made to resist being stunned and his passive Perception score is reduced by 2 (included above).

Lay on Hands (55 points). As an action, Huon can touch a creature and restore a number of hit points to it, up to the maximum amount remaining in this pool. Alternatively, he can expend 5 hit points to cure the target of one disease or neutralize one poison affecting it.

Spellcasting. Huon is a 7th-level spellcaster that uses Charisma as his spellcasting ability (spell save DC 16; +8 to hit with spell attacks). He has the following spells prepared from the paladin’s spell list:


ACTIONS
Extra Attack. Huon attacks twice whenever he takes the Attack action on his turn.


REACTIONS
Loyalty to the Crown. Huon can use his reaction to take the damage from an attack that would otherwise damage a creature within 5 feet of him. He is unable to reduce or prevent the damage he takes from this attack.
Last edited: Dec 8, 2021
Click to expand...

Mike Myler is a freelancing RPG goblin (or goblin that freelances for RPGs?), regent, the editor for the excellent EN5ider Patreon, and the Project Manager for Level Up: Advanced Fifth Edition. You can also find his marks in the N.O.W. book for the What's Old Is New RPG, on www.mikemyler.com⁠ (which has the neatest collection of free content around as well as links to his 6 hardcover campaign settings), and here on ENWorld in ENterplanetary DimENsions. What's next? The Oops! All Dragons | 45 dragons for D&D 5E and Level Up 5E Kickstarter ENDS this week! https://tinyurl.com/oops-all-dragons
G

Minor quip: While it's not a proof of being equal, his sword Sauvagine was forged by the same smith who forged Durandal, not your basic +1 sword. Maybe he should get a slightly better bonus (+2 maybe not +3).

I like that you gave him chain, seeing as plate was not invented yet.

Galandris said:
Minor quip: While it's not a proof of being equal, his sword Sauvagine was forged by the same smith who forged Durandal, not your basic +1 sword. Maybe he should get a slightly better bonus (+2 maybe not +3).
Click to expand...

The book says Durendall (obviously the same sword), and that it was one of three. The other one (Courtain/Cortain/Corte/Curtana) became a coronation sword. The former "was capable of cutting through giant boulders of stone with a single strike, and was indestructible", the latter literally is what it is because after being remade 20 times when tested on marble it broke short (and otherwise I think has no magical properties?), so I went with a +1 because that's in the middle there. You can probably replace it with most swords without throwing Huon's numbers out of whack.

Hurin88 said:
I like that you gave him chain, seeing as plate was not invented yet.
Click to expand...

♥ Aye took a minute to track down exactly what the white harness was.
Last edited: Dec 6, 2021

Speaking of paladins, is the Persian hero Rostam on your list?

Dark Arcarnist said:
Speaking of paladins, is the Persian hero Rostam on your list?
Click to expand...