Today’s entry in Mythological Figures (one of the very last) is coming into this endeavor late but that’s not unusual for the leader of the Argonauts: Jason! 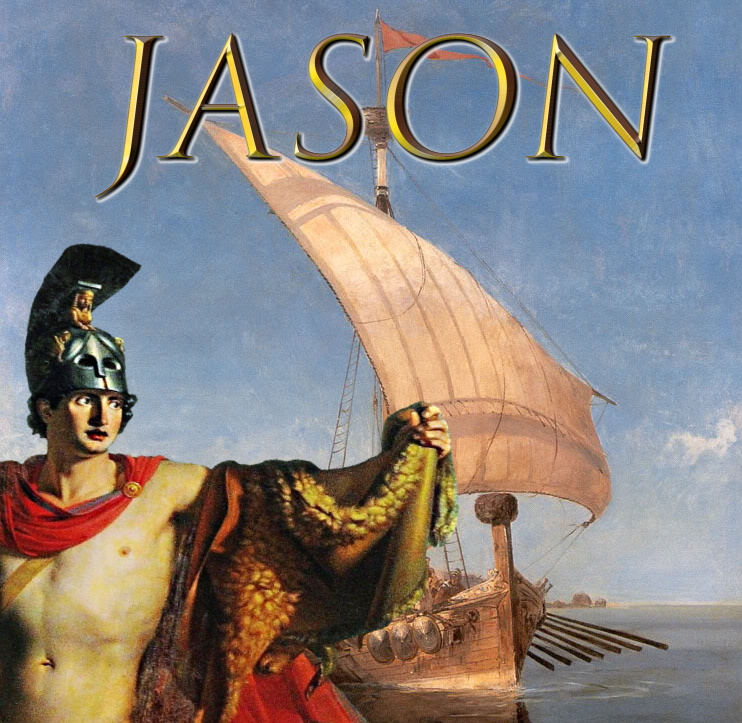 Jason was the son of King Aeson Iolcos of Thessaly, but his half-uncle Pelias seized the throne so instead he was raised by the centaur Chiron. To reclaim his birthright Jason was given the dire task of acquiring the Golden Fleece from King Aeetes in Colchis, so he gathered an impressive crew including heroes like Atalanta, Heracles, and Orpheus. Their journey to Colchis saw the Argos (itself an enchanted vessel able to receive and speak prophecies) and its sailors take concubines from murderous stench-cursed women on the isle of Lemnos (except Heracles), raiding by the geegeines (six-armed earthborn giants), fight harpies on behalf of Phineus of Salmydessus in Thrace, and sail through the Clashing Rocks (making the passage by way of the Symplegades safe for all ships following after). Jason then met with King Aeetes who agreed to give away the Golden Fleece if he could perform three tasks: yoking the fire-breathing khalkotauroi, defeating soldiers spawned by dragon’s teeth, and bypassing the dragon defending the enchanted pelt. Fortunately Aphrodite and Eros were convinced by Hera to make Princess Medea fall in love with Jason, and with her help (which possibly included murdering her brother Apsyrtus) he finished the tasks, stole the Golden Fleece, and escaped with her.

The way back home was just as difficult. First the ship prophesied that they required cleansing by Circe, and after that they had to pass by the sirens (like Odysseus, though in the case of the Argonauts it was Orpheus’ loud melodies that saved the day there). Then came the island of Crete and the bronze man Talos (calmed by Medea’s magic before she removed the bronze nail that held his blood in) before finally returning to Thessaly. Distraught by his father’s age, Jason has Medea use her magic to invigorate the old man. When the daughters of the usurper King Pelias see this they demand the same for their father, but instead Medea fools them into killing him so the two are driven out by Prince Acastus, exiled as murderers.

Jason and Medea head to Corinth where he becomes engaged to Princess Creusa. Enraged at his betrayal, Medea kills her (with a dress that ignites and sticks to her) and her father (who burns to death with her) and kills their two sons before fleeing to Athens on a dragon-led chariot sent by her grandfather Helios (the sun god). In time Jason (with help from Achilles’ father Peleus) returns to Iolcus and defeats King Acastus, finally reclaiming the throne. Though he bears a son who follows him in rulership (Thessauls), his betrayal of Medea loses Jason his favor with Hera and he ultimately dies alone, unhappy, and violently as the rotting stern of the Argo fell on top of him in the middle of a nap.

Design Notes: Trained by the trainer of heroes, Jason is a formidable adventurer but also someone who relies a great deal on the gods or just plain old luck. We’ll start him off with the most seafaring-est rogue option—he was trained by an adventurer trainer in a place filled with islands after all—then lean into the skill-based fighter archetype after that, tossing in the Lucky feat for good measure. Versatile and surprisingly skillful, he’s definitely in good stead to lead the Argo where it ought to go, and in a fight he won’t blow anyone out of the water but he will be surprisingly reliable. Let’s do the numbers! The DMG comes up with 14 and the Blog of Holding a more sobering 11.33 which is where we’ll lean for his final challenge rating.

Background: Shipwright. When Jason has enough timber and access to carpenter’s tools, he can repair a water vehicle, restoring 30 of the vehicle’s hit points. A ship that Jason repairs this way needs to be docked and fully repaired before he can use this feature to repair it again.

Action Surge (1/Short Rest). On his turn, Jason can take an additional action on top of his regular action and a possible bonus action.

Combat Footing. Whenever he makes a melee attack against a creature on his turn, Jason doesn’t provoke opportunity attacks from that creature until the end of his turn.

Cunning Action (1/Turn). Jason can use a bonus action to take the Dash, Disengage, or Hide action.

Fighting Style: Sealegs. As long as he is not wearing heavy armor or using a shield, Jason gains a +1 bonus to AC, and he gains both climbing and swimming speeds equal to his speed (included above).

Indomitable (1/Long Rest). Jason can reroll a saving throw that he fails but must use the new roll.

Mastery Dice 1d10 (5/Short Rest). Jason can spend a mastery die to fuel one of the following effects. Each effect activates after the results of a roll are revealed.
Natural Explorer: Coasts. When Jason makes an Intelligence or Wisdom check related to the coast, his proficiency bonus is doubled if he is using a skill that he’s proficient in. While traveling for an hour or more in his favored terrain, Jason gains the following benefits:
Second Wind (1/Short Rest). On his turn, Jason can use a bonus action to regain 16 (1d10+11) hit points.

Sneak Attack (1/Turn). Jason deals an extra 14 (4d6) damage when he hits a target with a weapon attack and has advantage on the attack roll, when the target is within 5 feet of an ally of Jason that isn’t incapacitated and Jason doesn’t have disadvantage on the attack roll, or when the only creature within 5 feet of Jason is his target. The attack must use a finesse or a ranged weapon.

Swashbuckling. Jason adds his Charisma modifier (+2) when rolling for initiative.


REACTIONS
Uncanny Dodge. When an attacker Jason can see hits him with an attack, he can use his reaction to halve the attack’s damage against him.


EQUIPMENT
Argo. Jason’s ship (a galley) was made by the builder Argus with the help of Athena. In addition to being able to speak prophecy, the ship is under the protection of Hera.

Golden Fleece. Made from the skin of a golden flying ram sent by the gods, the Golden Fleece has miraculous healing powers. Five times per day, on its turn a creature wearing or touching the Golden Fleece can activate it to regain 10 hit points. A creature can also touch the Golden Fleece and use an action to neutralize a poison affecting it or cast remove disease on itself, though each use of these other properties counts towards the Golden Fleece’s daily uses of healing. The Golden Fleece uses the cloak magic item space. [converted from The New Argonauts]
Click to expand...

Personally, I would've put Jason's Wisdom score much, much lower. How else can you explain failing an Insight check so badly he thinks "Listen, I'm going to marry a real proper Greek princess rather than an uncultured non-Greek like you so our marriage is over now, but you get to hang around and be my mistress and raise our now-illegitimate children by yourself! Isn't that wonderful?!" to the powerful sorceress who literally is the only reason he ever accomplished anything was a good idea? I'm just saying, there's a reason Medea wins and thrives in Athens while Jason dies alone crushed by the decaying monument to the greatness he didn't earn.

Edit: This is not a criticism of the build, just using it as an excuse for me to talk crap about Jason.

Supporter
Will we also get the stats for the other mythical Jason? The one with the hockey mask?