Mythological Figures is headed back to the steppes today with one of the most famous warriors from among the Khan’s soldiers: the athletic noblewoman Khutulun! 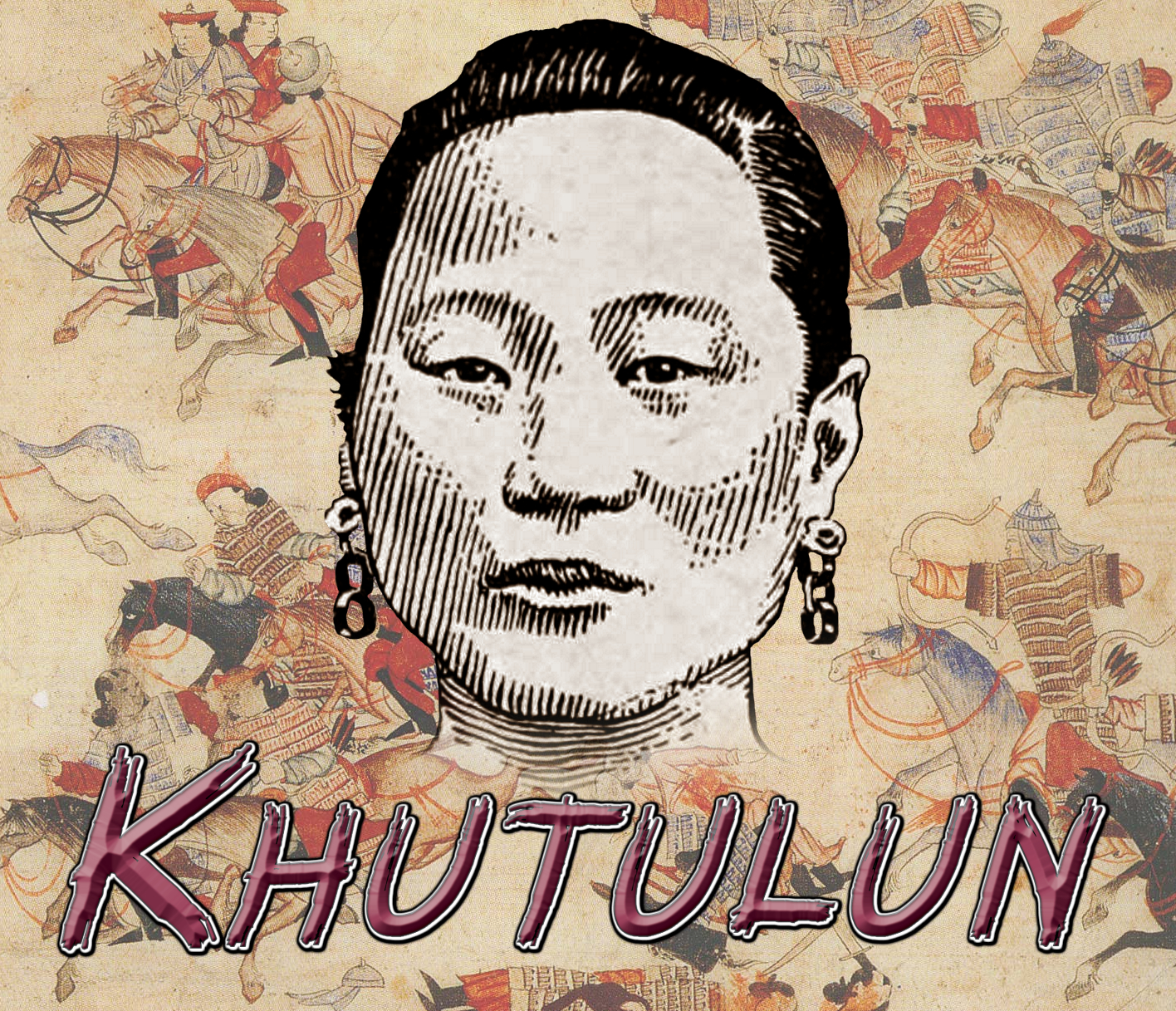 Khutulun (aka Aigiarne, Aiyurug, Khotol Tsagaan, and Ay Yaruq) was an athlete, noblewoman, and warrior in Mongolia between 1260–1306, a distant relative of Genghis Khan and closer relative to Kublai Khan, who she soldiered beside in war. By around her 20th birthday Khutulun’s father Kaidu ruled a vast swath of Central Asia between the Central Siberian Plateau, India, western Mongolia, and Oxus (a major river also called Amu Darya, the Amu or Amo River, or Amudaryo), and as the favorite she often gave him advice and support.

Marco Polo’s book Il Milione depicts her as a superb warrior able to easily take captives while on horseback, making her mark in battles against the Yuan Dynasty. He describes how she demanded that any suitors had to defeat her in wrestling, forfeiting horses should they fail—and they say she’d collected as many as 10,000 steeds. Eventually however somebody managed to do it, though who exactly that was is uncertain. It’s also rumored that Kublai attempted to make her his successor before dying in 1301, but her male kin objected. Afterward Khutulun guarded his tomb for 5 years alongside one of her brothers (Orus) and eventually died defending challenges against her (ostensibly because she didn’t approve of Duwa Khan’s ascension).

Design Notes: This is far and away one of the funner builds in the column! Being able to pluck people up while on horseback and then ride off is awesome and I imagine a huge morale booster so she’s got the banneret fighter archetype (fitting for that, her place near her father and persuasive capacity, and granting access to the feats needed to make that stunt functional). Of course like Genghis Khan she’s got some ranger for superlative horseback riding skills (plus an extra level to snag a feat), and then a little dip into rogue so she can get Expertise on that essential Athletics skill. Let’s take a look at the numbers! The DMG lands her at 8.5 while the Blog of Holding’s rubric actually comes in a touch lower with an 8.1666 so I’m confident with her at an 8. With over 100 hp, some minor influence over allies (that rally!), her mounted speed and skills, and the suite of grappling features and feats she’s got, Khutulun is definitely seeing play at my table soon.

Background: Military Service - Rank. Khutulun commands respect in the army. Soldiers loyal to the Khan know she is their superior, and she can use her influence to temporarily requisition simple equipment or horses, or gain entrance to military fortresses and outposts.

Action Surge (1/Short Rest). Once on her turn, Khutulun can take an additional action on top of her regular action and a possible bonus action.

Animal Companion (Riding Horse). Khutulun’s horse increases its AC, saving throws, attack bonuses, and damage rolls by +5. Telling the beast where to move does not require any action from Khutulun, but she can otherwise use an action to make the horse take either the Attack (in which case Khutulun makes an attack of her own), Dash, Disengage, Dodge, or Help action. While traveling through grasslands while only with her horse, they move stealthily at a normal pace.

Favored Enemy. Khutulun has advantage on Wisdom (Survival) checks to track humans, as well as on Intelligence checks to recall information about them.

Feat: Grappler. Khutulun has advantage on attack rolls against a creature she is grappling and she can use an action to try to pin a creature she’s grappled. To do so, Khutulun makes another grapple check. If she succeeds, Khutulun and the creature are both restrained until the grapple ends.

Feat: Mobility. Khutulun can Dash through difficult terrain without requiring additional movement. Whenever she makes an attack against a creature, she doesn’t provoke opportunity attacks from that creature until the end of her turn.

Feat: Mounted Combat. When Khutulun’s mount is attacked, she can make herself the target of that attack. In addition, she has advantage on melee attack rolls when her target is an unmounted creature smaller than her mount (usually any unmounted target of Medium size or smaller). Finally, when Khutulun’s mount is subjected to an effect that allows it to make a Dexterity saving throw to take only half damage, it instead takes no damage if it succeeds on the saving throw, and only half damage if it fails.

Second Wind Rally (1/Short Rest). On her turn, Khutulun can use a bonus action to regain 1d10+8 hit points. In addition, she chooses 3 creatures within 60 feet that can see or hear her. Each target regains 12 hit points.

Spellcasting. Khutulun is a 2nd level spellcaster that uses Wisdom as her spellcasting ability (spell save DC 13; +5 to hit with spell attacks). She has the following spells prepared from the ranger’s spell list:

It’s also rumored that Khutulun attempted to make her his successor before dying in 1301, but her male kin objected.
Click to expand...

Was this supposed to be "It's also rumored that Genghis Khan attempted to make her his successor..."?

thealmightyn said:
Was this supposed to be "It's also rumored that Genghis Khan attempted to make her his successor..."?
Click to expand...

No he was long gone by then. That should be Kublai, not Genghis. I just Khan't seem to get it right.

How does she wield her fist two-handed?

Worrgrendel said:
How does she wield her fist two-handed?

Worrgrendel said:
How does she wield her fist two-handed?

Just stylize it as any unarmed double-strike. A few classic examples:

Random note because Khutulun is one of my favorite historical figures (My information comes from the research of Jason Porath, and his entry for her from "Rejected Princesses", which you should check out if you haven't)

We don't know who she ended up marrying, but we actually do know they did not actually beat her in wrestling. She ended up marrying because of political and social pressure, because her refusal to lower her standards was causing problems for her Father (whom she loved and respected as far as we can tell) who was trying to help hold their country together by allowing people to spread rumors about the "real" reason she wouldn't take a husband (everything from her actually sleeping with her father to her sleeping with everyone, you get the idea) .

Additionally, she is the only woman to ever be mentioned as holding a "gergee" or "paiza": a silver medallion that the Great Khan would bestow upon individuals to show "the power" of whomever held it.

Also, not sure how true this is, but I love the idea, to quote: "Mongolia continues to honor Khutulun to this day. The traditional outfit worn by Mongolian wrestlers is conspicuously open-chest - to show that the wrestler is not a woman, in deference to the undefeated Khutulun." (Porath, Rejected Princesses, pg 3)

Which, is just bad-ass, if it is true. To be good enough at a man's sport that they change the uniform out of respect of your skill.

OK. That wasn't listed as part of the fighting style above. Only additional bludgeoning damage was listed.

I fully understand stylizing it (the double fist is my favorite btw). I was meaning more from a mechanical standpoint since it wasn't listed in the fighting style in the write up.

Worrgrendel said:
OK. That wasn't listed as part of the fighting style above. Only additional bludgeoning damage was listed.

Anything that's purely stats (like a +2 from the archery fighting style) just gets rolled into the numbers and isn't explicit. NPCs with class levels eat up word count!

I still have her card for 'Anachronism' somewhere...