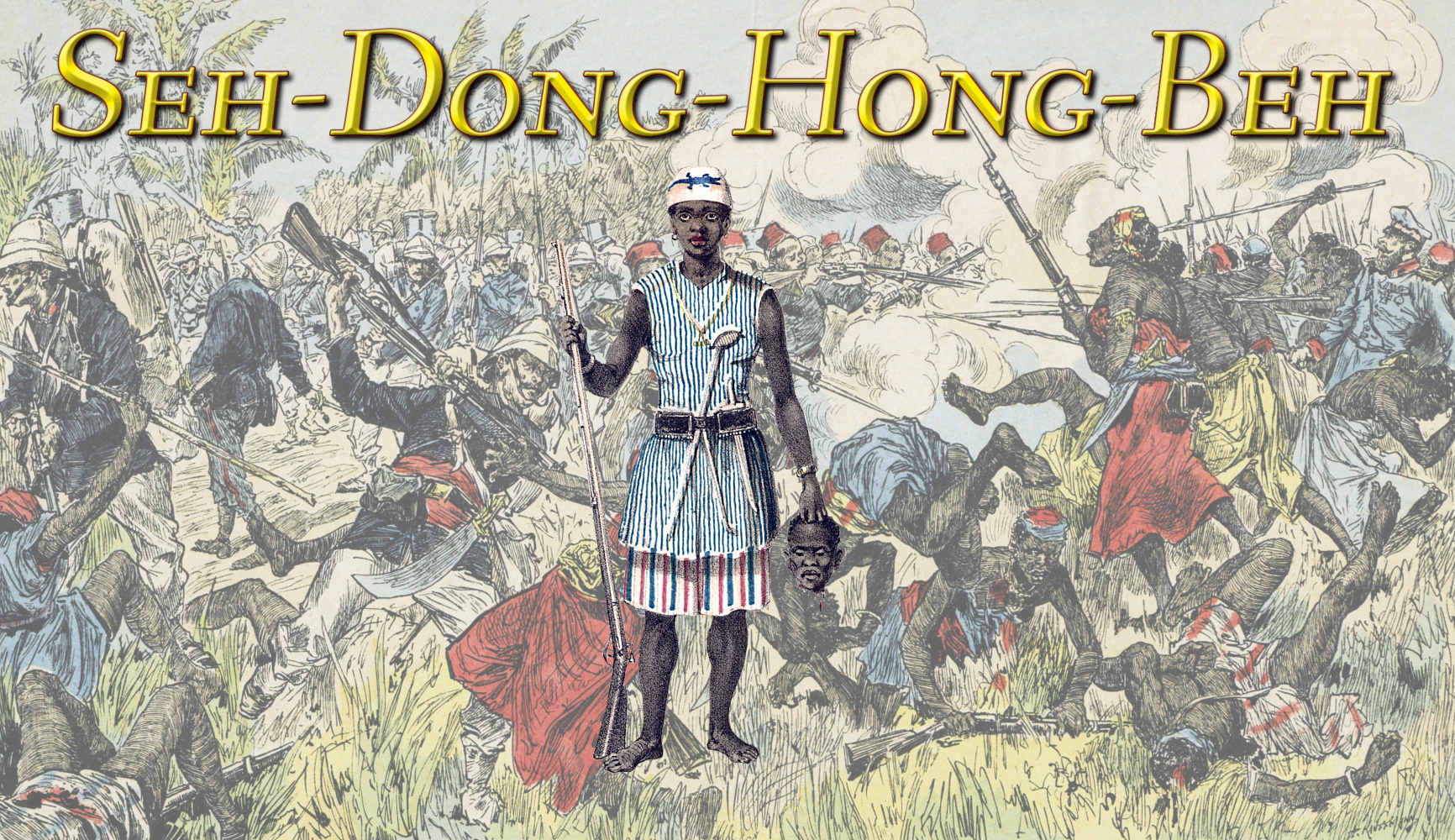 Seh-Dong-Hong-Beh ("God Speaks true" in Fon) is thought to have been born in 1835 in the Kingdom of Dahomey, but like her death her origins are not completely certain. Her greatest claim to fame is leading a force of 6,000 warriors against the Egba fortress of Abeokuta in a failed siege in 1851—a doomed effort against a defensible settlement of more than 50,000 people. What makes this remarkable is that she led only woman soldiers, members of the Dahomean Mino (also known as Ahosi or N’Nonmiton). If you’re thinking, “this sounds kind of like the Dora Milaje in Black Panther”, there’s an article you should check out on Hypotheses.org.

The Dahomean Mino (renamed as Dahomey Amazons by Europeans) were started by King Houegbadja (third ruler of the Kingdom of Dahomey, 1645–1685) originally as gbeto (elephant hunters). His son King Agaja (1708–1732) assigned himself musket-wielding woman bodyguards that then became a militia before formally joining the increasingly militaristic army in 1729 as banner bearers called N’Nonmiton (“our mothers” in Fon). With King Ghezo (1818–1858) they became the Ahosi (“king’s wives”) and a proper military force of about a third of the total army. Seh-Dong-Hong-Beh may have died in the battles of 1851, but reports of her afterwards are scarce because of a French colonization practice of destroying all the infrastructure that might reproduce warriors in Dahomey. In 1882 it’s said she and the tenth king (Badohou, or Glele) led a force of 2,000 Ahosi against French colonists over rights of trade, forcing the foreigners into retreat and burning down their settlements. More notably she and her warriors are said to have been the last to accept defeat when the eleventh king of Dahomey (Béhanzin) surrendered, burning the fields and villages before letting them be taken, then surreptitiously joining the survivors to take French commanders as husbands only to kill in the night.

Design Notes: Not much to go on other than her picture, but given Seh-Dong-Hong-Beh’s possible old age we’re going to give her a hefty number of levels to fill out that badass woman warrior archetype. The monk class is an obvious fit, and given Ahosi's extreme combat proficiency some levels in fighter are appropriate—going with the kensei and battlemaster archetypes, respectively. What we end up with is a very swift combatant at range or in melee, both able to dish out a decent rate of damage and avoid it. Let’s do the numbers! We’re in one of those rare situations where both the DMG and Blog of Holding landed in perfect agreement at 11.66, giving Seh-Dong-Hong-Beh a final CR of 11.

Background: Soldier. Seh-Dong-Hong-Beh commands respect in the army. Soldiers loyal to the crown know she is their superior, and she can use her influence to temporarily requisition simple equipment or horses, or gain entrance to military fortresses and outposts.

Action Surge (1/Short Rest). On her turn, Seh-Dong-Hong-Beh can take an additional action on top of her regular action and a possible bonus action.

Dextrous Parry. Seh-Dong-Hong-Beh can defend herself with a hunting rifle, longbow, or longsword on the same turn she makes an unarmed strike as part of her Attack action, gaining a +2 bonus to AC until the start of her next turn so long as she is not incapacitated and has the weapon in one of her hands.

Feat: Mobility. Seh-Dong-Hong-Beh can Dash through difficult terrain without requiring additional movement. Whenever she makes an attack against a creature, she doesn’t provoke opportunity attacks from that creature until the end of her turn.

Maneuver Master (4d8 Maneuver Dice/Short Rest). Seh-Dong-Hong-Beh can expend a maneuver dice to perform a single maneuver with an attack.

Path of the Weaponmaster. Seh-Dong-Hong-Beh has a particular affinity with hunting rifles, longbows, and longswords, treating them as monk weapons. In her hands, these weapons count as magical for the purpose of overcoming resistance and immunity to nonmagical attacks and damage.

Stillness of Mind. Seh-Dong-Hong-Beh can use her action to end one effect on herself that is causing her to be charmed or frightened.

Weaponmaster Strike. Seh-Dong-Hong-Beh can use a bonus action when she hits a target with a hunting rifle or longbow attack on her turn, dealing an extra 1d4 piercing damage on ranged attacks with the weapon until the end of her next turn.


REACTIONS
Deflect Missile. Seh-Dong-Hong-Beh can spend her reaction to strike a missile when she is hit by a ranged weapon attack, reducing its damage by 17 (1d10+12). If she reduces the damage to 0, she can catch the missile if it is small enough for her to hold in one hand and she has at least one hand free. If Seh-Dong-Hong-Beh catches a missile in this way, she can spend 1 ki point to make a ranged attack with the weapon or piece of ammunition she just caught, as part of the same reaction (+9 to hit, range 20/60 ft., minimum 1d6+4 damage).

Slow Fall. Seh-Dong-Hong-Beh can use her reaction when she falls to reduce any falling damage she takes by 40.
Click to expand...

Nice work as always Mike - I really love your NPC work. You do a great job of developing a them and building the character around.

Historian of the Absurd

From my readings, the French who fought in Dahomy only respected the women soldiers among the Dahomian forces. Even the French Foreign Legion thought they were excellent warriors.