The Mythological Figures column / A Touch More Class experiment has thus far seen: Sherlock Holmes (using the savant), Nikola Tesla (built as a tinkerer), Billy the Kidd (the gunfighter), Paul Bunyan (a monster tamer alongside Babe the blue ox), and last week Harry Houdini (fatebender in the house!) The Kickstarter is live right now (go pledge if you haven’t!) so I’m continuing the series, although today we’re going way, way back to the distant past, far from the literary and historical figures we’ve recently looked at.

This subject is close to my heart (I read the book he’s attributed with, even!) because I’m a taoist but even so, most of you will not be familiar with him. Don’t feel bad however--despite his influence there’s sadly not much information about the author Zhuang Zhou! 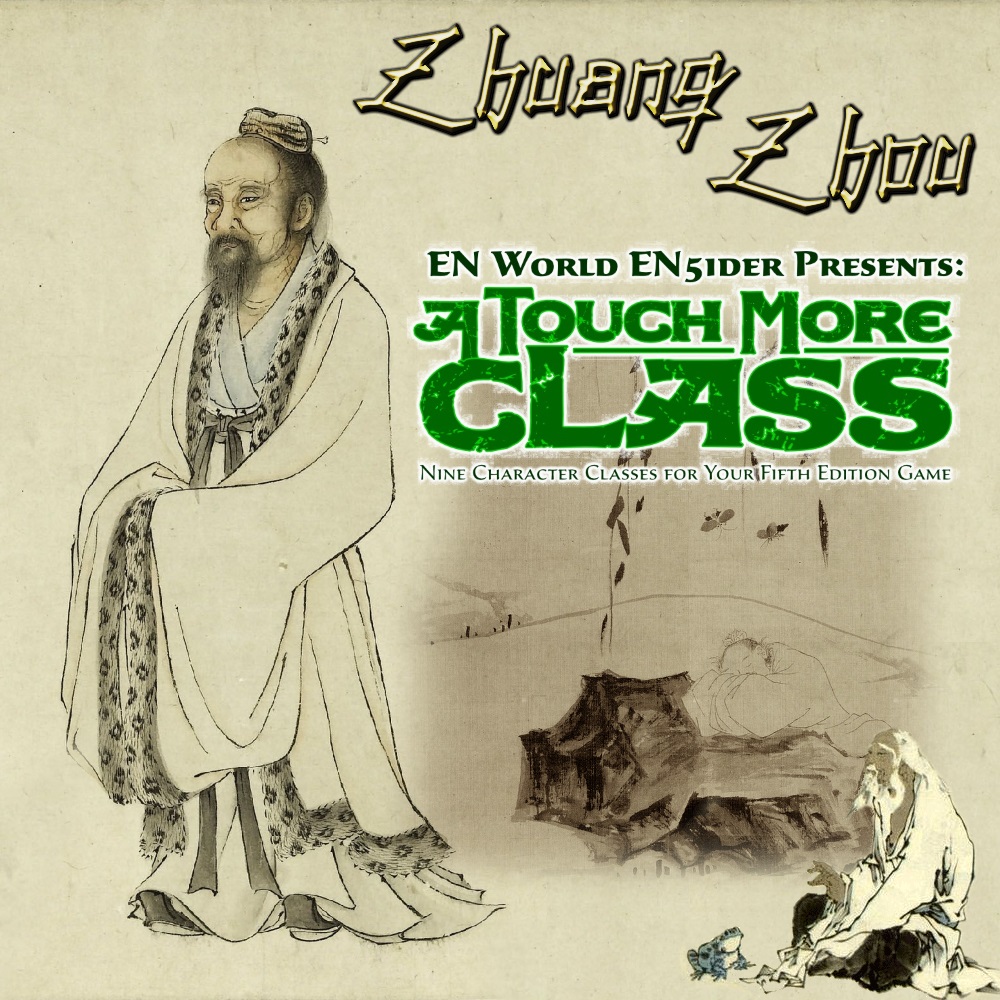 One of the reasons I chose this fellow for today’s post has to do with his relative obscurity. Zhuang Zhou (aka Zhuangzi or Chuang Tzu) was a very influential philosopher and scholar in 400 BC, penning the kind of obviously named Zhuangzi (a taoist book). It’s written elsewhere that he also penned a lot of scathing satire as well as a few melodies, and he had some forerunner beliefs on evolution. Considering that we’re coming up on two and a half millennia between his time and ours, it shouldn’t surprise us that there’s not much material about him. However since he was a critically important taoist--and because feng shui, a type of geomancy, is rooted in taoism--he’s a perfect candidate for a geomancer build!


Download the geomancer class for free over here!
​
Design Notes: Since details about Zhuang Zhou are sparse I focused on making a geomancer’s geomancer, concentrating on physicality with the architect geomancer order. Alternatively this might be reworked as an apothecary--drop the archetype features (The Ground of Being, Arrange Fates, Impenetrable Hermitage, and Mystic Masonry) and add Chi Healing (access to cure wounds, goodberry, lesser restoration, revify, and freedom of movement via Elemental Magic), Chi Abundance and Chi Empathy (as Disciple of Life and Blessed Healer from the Life domain). As it stands however I think this build is a great example of what the class is and does, wonderfully illustrating the difference between a warlock archetype and a proper class build using the same framework!

Background Feature: Divine Connection. As a close understudy of Lao-Tzu, Zhuang Zhou has always had a preternaturally unnerving and mystical understanding of the universe.

Elemental Magic (Recharges on Short Rest). Zhuang Zhou is a 7th-level spellcaster that uses Wisdom as his spellcasting ability (spell save DC 14; spell attack +6). To cast a geomancer spell, he must spend an elemental spell slot of that level or higher, and he must meet that spell’s environmental availability requirement. He can cast the following spells from the geomancer’s spell list as 4th-level spells (2 slots):

Mystic Masonry. Whenever Zhuang Zhou casts tiny hut, he can instead use the spell to produce a stonework house. To do so, he must have adequate materials present. Available stone, clay, and other materials in a 20-foot cube are reshaped instantaneously into an earthen abode 20 feet on each side and one story tall. The floorplan is Zhuang Zhou’s choice (average contains 4 rooms).

Numinous Acquaintance. Zhuang Zhou can cast detect evil and good at will, without expending a spell slot.

Stone’s Blessing (3/Long Rest). If he is holding his sacred stone or if it is on his person, Zhuang Zhou can use a bonus action to grant 10 temporary hit points to himself and each friendly creature he can see within 30 feet.

The Ground of Being. Zhuang Zhou always has access to Earth element spells.


REACTIONS
Arrange Fates. Zhuang Zhou can use his reaction to apply a +5 bonus or –5 penalty to any one attack roll, ability check, or saving throw made by a creature he can see within 30 feet. He can wait until after it rolls the d20 before deciding to use this feature, but he must decide before the GM says whether the roll succeeds or fails. Zhuang Zhou begins with 1 use of this feature, and gains 1 more use each time he uses Stone’s Blessing (maximum 4 uses). His number of uses resets to 1 whenever he finishes a long rest.