D&D 5E Name a technique or design choice that your group enjoys, but that is generally unpopular.

You can play some games wrong. It's a game , of course you can.

And not using dexterity to determine initiative all the time.

Skill challenges in 4e were fun for my group.

DND_Reborn said:
Rolling 2d10 instead of d20 for all rolls except initiative
Click to expand...

Apologies, don't mean to derail the thread, just really curious about this - could expand on this please?
Why two - is it to get an average? How do you deal with Advantage?

AnotherGuy said:
Apologies, don't mean to derail the thread, just really curious about this - could expand on this please?
Why two - is it to get an average? How do you deal with Advantage?
Click to expand...

It is to remove the linear aspect of the flat d20. With 2d10 your range is 2-20, so almost the same as 1-20, allowing it to easily replace any time a d20 roll is called for (except Initiative as noted). We feel the "typical" effort or roll should be more likely than the extremes (a very low or very high result) in pretty much everything a creature does. Although not bell-curved, 2d20 is better at giving you results from 7-15 (the "typical effort" range).

Advantage and disadvantage is easily handled by adding another d10 for every source (we allow advantages/ disadvantages to stack as well as cancel each other out). Regardless of how many d10s you end up rolling, if you have advantage you take the best 2 and if you have disadvantage you take the worst 2. So, if I had an ally using the Help action and was attacking a prone creature in melee, I would have two sources of advantage, and roll 4d10; but I would only keep the highest two rolls for my total.

I hope that helps. If you have any further questions or interest, PM me.

So, it works pretty well IMO and we used it for quite a while (over a year)... however, for the last couple months (barely) we have adopted a new system for ability checks, attack rolls, and saving throws to more model the results we want. Now ability checks are flat d20s, attack rolls have disadvantage, and saving throws have advantage. This creates a more "defensive" mode of play which we have been really enjoying. It reduced the amount of house-rules we needed to accommodate the 2d10 system.

I don't know if it's properly "unpopular" or not, but in my home game, PCs do not face unplanned, permanent, irrevocable character death. Dying to a random orc's critical hit would not happen in my game, unless the player and I agree about it (and I usually favor the player's preference, though if I think the character has a reason for sticking around, I'll speak up for them). I've gotten a LOT of flak about this one every time I mention it--people instantly assume it means my game has zero stakes, that it's just an infinite wish-fulfillment fantasy with no actual difficulties or obstacles. The times I've mentioned this to my players, they thought that was either hilarious or deeply confusing.

Because I don't have a game with zero stakes. I have a game with very dramatic, difficult stakes. "Do I get to keep playing" is not one of them. Instead, it is deep questions of moral character, challenges to a character's intelligence or wisdom or creativity.

I have challenged the party Bard, not by putting him under threat, but by making it so he must choose between purity and helping others. He chose twice to help others, even though it meant taking dark and dangerous powers into himself, and now that binds him to nefarious things that he will have to grapple with later.

I have challenged the wide-eyed wanderer Druid with having to keep dark secrets from his trusted friends, and having to kill some very bad people...because a devil asked him to. He eventually chose to be honest, despite the toll, and then to trust others, despite not knowing what the future held--and now he has been challenged with a much different and deeper mystery.

I have challenged the party Ranger with power and temptation: he was (and in theory is) an ardent critic of his orc grandmother's decision to move her Nomad tribe into the city and begin integrating into city life...but now he has had his ambitions justified by proof that he is (in some spiritual sense) an heir of the First Sultan, and has decided to begin creating his own city-state. Far from abandoning the comforts and controls of the cities, far from repudiating the debauchery and moral turpitude of his human grandfather, he has slowly begun to embrace and become these things, and developing some rather "rich-man" habits (like becoming a connoisseur of fancy tea).

Edit:
And to be clear, none of this means losing doesn't happen, nor does it mean that characters are completely unable to die. It does, however, mean that if a character does die, it's not permanent and irrevocable unless the player is okay with that. A character may die...and then "wake up" in the Land of the Dead, and have to find their way back to life. Or they may die...and then suddenly get sent back, without knowing why. Or they SHOULD have died, they very clearly should've suffered a mortal wound...and yet they're still alive. Why? How?

Answering those questions is, as far as I'm concerned, a thousand times more interesting than creating a new character if the player would prefer to keep playing the character they currently have. I actually talked the aforementioned Druid out of killing off his character For Real. He needed to depart the game for real-life reasons, and wanted a "big finale," thinking that a death would make sense. I talked him into doing an ambiguous, "Elijah taken up in the whirlwind"-style ending--something that could quite easily keep the character away for a completely arbitrary amount of time, while also enabling a return if he thought that made sense later. And it turned out he did, so he's now back, and he's an active party member now.
Last edited: Mar 17, 2022

We also welcome some inter-party conflict, as long as it doesn’t happen every session.

DND_Reborn said:
Although not bell-curved, 2d20 is better at giving you results from 7-15 (the "typical effort" range).
Click to expand...

Obviously, the bell-curve is flatter than for, say, 2d6; but it's still there.

Lanefan said:
Nitpick: 2d10 (or 2d-anything, for that matter) is bell-curved. In the case of 2d10 that curve is centered around a peak of 10.5, meaning 10 and 11 share the highest odds of occurring.

Obviously, the bell-curve is flatter than for, say, 2d6; but it's still there.
Click to expand...

And it's shaped like a triangle, rather than a bell.

CleverNickName said:
We use the rules for encumbrance, we track our ammunition and spell components, and we roll 4d6 for our stats.
Click to expand...

You monster! How DARE you make your players do... resource management?!?


On the note of Monstrous DMing... I make my 5e players:


And they love it, my little group of masochists...


I've found it's not so much unpopular as people just forget about it.

I stole your method of doing inspiration, and my group likes it a lot.

Lanefan said:
Nitpick: 2d10 (or 2d-anything, for that matter) is bell-curved. In the case of 2d10 that curve is centered around a peak of 10.5, meaning 10 and 11 share the highest odds of occurring.

Obviously, the bell-curve is flatter than for, say, 2d6; but it's still there.
Click to expand...

2dX is not a bell-curve, although this is commonly assumed to be because it meets some important criteria for bell-curves: a) a central peak, b) symmetry around the peak, and c) continuously decreasing distribution from the peak in both directions. It is often mistakenly given as an example of a bell-curve, but is really sometimes called a pyramid distribution.

Bell-curves have two points of inflection, located one standard deviation above and below the mean, where the concavity of the curve changes. See below for examples:

d20 has 0 points of inflection because the distribution "line" never curves. 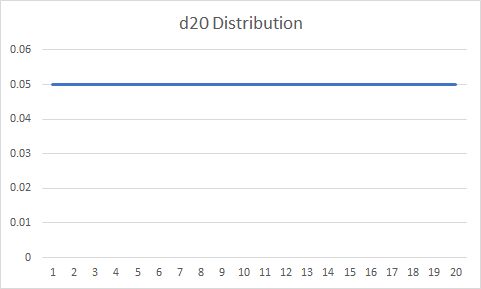 2d10 distribution has one critical point where the slope reverses at the peak, but this is not a point of inflection. 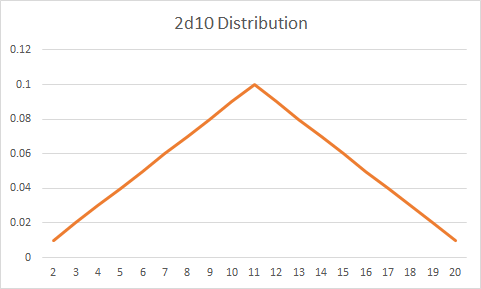 3d6 distribution has two points of inflection and thus is a bell-curve (but it should be noted is FAR from a normal distribution!!!): 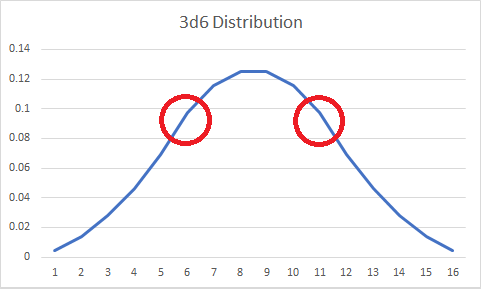 I should also mention another concept I REALLY like but we haven't adopted yet when it comes to rolling d20s is this (again, except for Initiative):

You roll 3d20 and take the MIDDLE roll! It has an excellent central cluster for typical results (ORANGE curve). For advantage (GRAY curve), you use the highest of the three dice, and for disadvantage (BLUE curve) you use the lowest. I added the linear d20 (YELLOW dotted line) for reference: 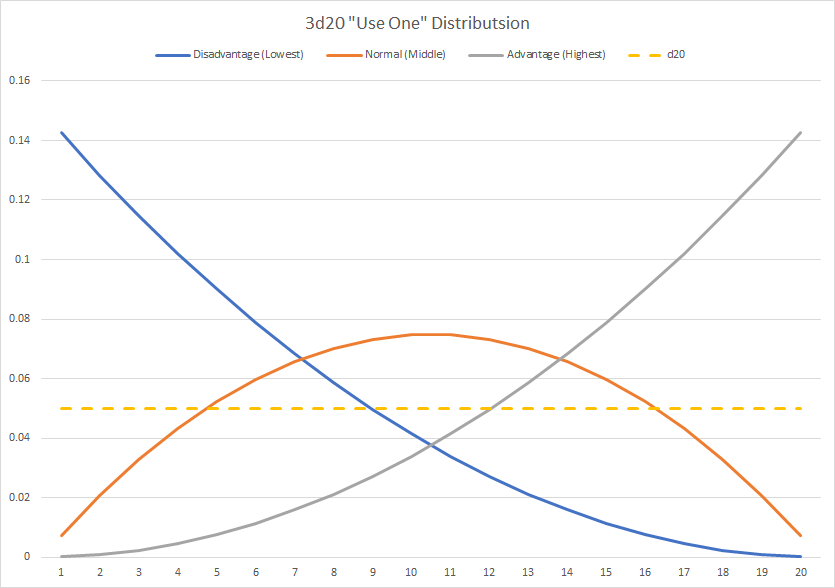 The benefit to this is also the following:
Now, this REALLY rewards advantage and penalizes disadvantage, which is the only reason we haven't adopted it yet. Someday I probably will because it is just such an elegant system IMO and appeals to the math geek in me so much LOL!

Esbee said:
Your 3d6 chart is looking at me funny...
Click to expand...

Whatever you do, DO NOT STARE AT IT! It doesn't like that...

Ive thought about doing this, what method do you use?

Esbee said:
Make Divine Casters pass a faith test each time they cast lest the spell fail.
Click to expand...

Interesting, please explain. Even a cleric, paladin or druid in good standing with their deity need to pass this check?

R_J_K75 said:
Ive thought about doing this, what method do you use?
Click to expand...

The idea is basically a port over from 1st edition - a wizard (and other arcane casters who study magic) must make a check to know. (Where in 1e it's a % based on intellect). For 5e I make the DC 12 + spell level. (Cantrips count as level 0)

They add intellect modifier plus proficiency bonus. If the roll fails, the spell is put on a block list and they can't attempt it again until their proficiency modifier increases. Once they are level 2, they may make their checks for new spells within their field at advantage.

I don't apply this rule to Sorcerers or Warlocks, who may simply select their spells. This becomes a bit of a bonus feature. Wizards have versatility and can potentially learn anything, but it's not guaranteed.

For Faith Rolls, It's a DC 8 plus spell level to cast. This assumes they are already in good faith. Though I came up with an addendum - if a character uses their inspiration for a faith roll and it succeeds, then they keep the inspiration.

These are admittedly experimental, but the purpose of my 5e game is in large part to test out some house rules, and the players knew this coming in.