I’m a huge fan of CAPERS, Craig’s award winning RPG of humans wielding superpowers during Prohibition. It uses a card base mechanic that suggests a form of gambling that perfectly suits the hedonism of the era’s recreations. Cards and gambling put against a world of gangsters and speakeasys is storytelling and mechanical perfection, offering gameplay that enhances the in-game culture of the setting. Because of my high esteem for CAPERS, I am always on the lookout for Craig’s next idea. When I got a preview at Gen Con 2022 of Code Warriors, Craig Campbell’s next full RPG, I was interested to see if he could combine elements again to create something amazing. To my delight, with Code Warriors, Craig Campbell strikes again! 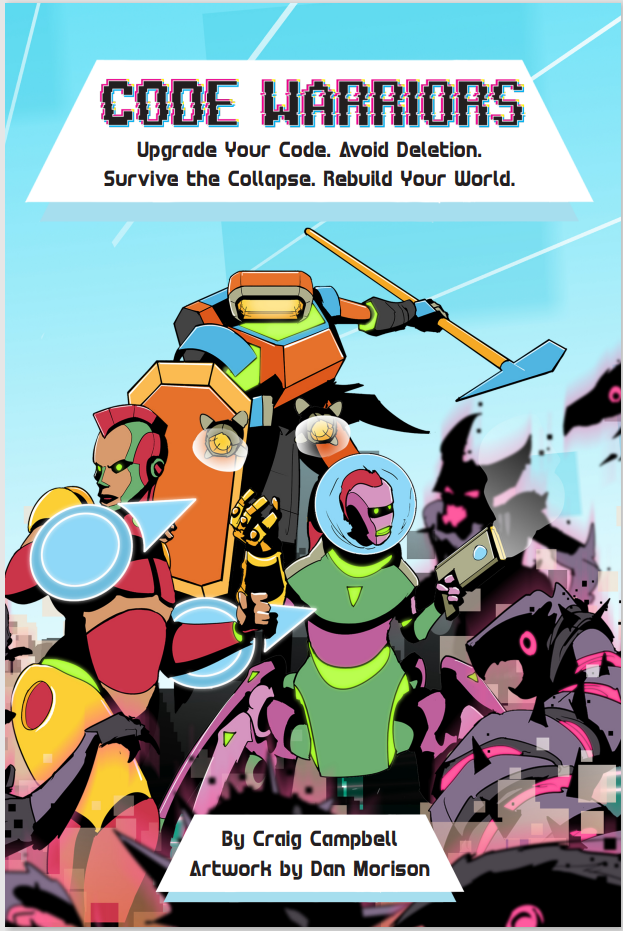 To get into the mindset of this tabletop roleplaying game, take Tron, Wreck-It Ralph, Ready Player One, The Matrix, and any story of the characters inside the computer, then pull the plug. Code Warriors tells the story of those programs as their system fails and their world comes to an end. Think Disney family fun seen through the pitch-black apocalyptic fantasy lenses of MÖRK BORG’s atmosphere. The juxtaposition of these elements creates a stronger whole. Humans going through an apocalypse has been done, but computer programs facing a total system failure of their computer, that’s a fresh coat of point for the concept.

Code Warriors is 192 pages of setting, rules, NPCs, aberrants (monsters), and system hazards. The core system runs on Trait Checks involving four Traits (Body, Mind, Charm, and Heart). During character creation, you’ll pick your Program Type (your class) and a variety of details to develop your character background while providing a reason to care about the end of the system. Despite the summer tentpole inspiration for this RPG, the tone leans towards serious and even somber. With the end near, this RPG requires a session zero to decide on the overall tone of the RPG. While it could be addressed as a serious take on the idea of living programs (and the game feels perfect for that), your gaming table will need to discuss how serious the world will be. 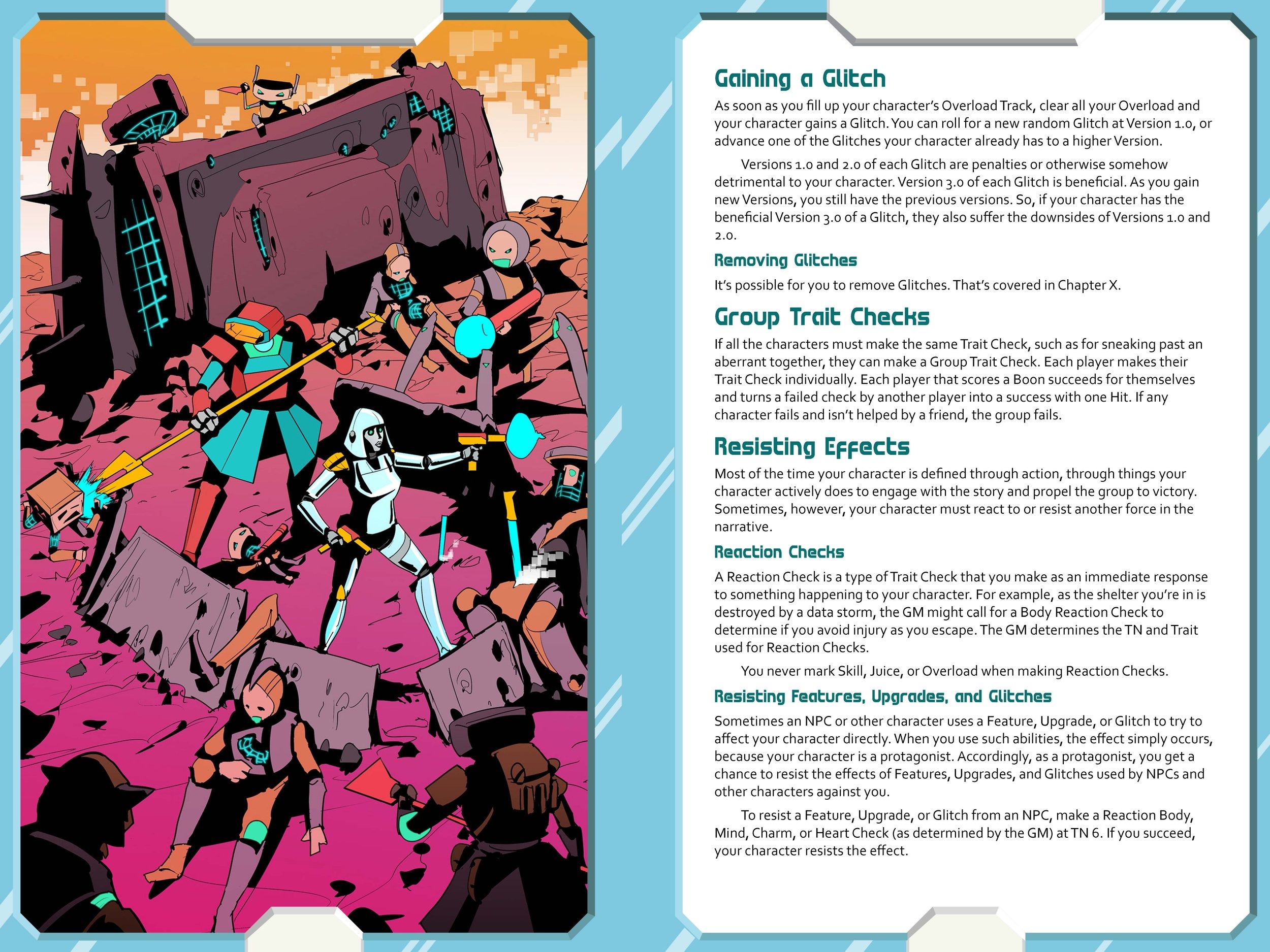 Be prepared: for Code Warriors you’ll need six d8s. If you’re at home, you have at least twenty d8s or you would not have clicked on this article. Hey, you’re a gamer and dice are life, we all live that truth! However, I don’t travel with six of any type of die save for d6s and d10s. If you’re like me and have the dice at home, make sure you pack a few extra d8s if you sign up to play this RPG at a convention.

For a check to accomplish any action (skill, combat, etc.), pick a Trait and roll that number of d8s against a Target Number between 5 and 8. You have to roll at least one success to succeed at any Trait Check. Additional successes offer boons to enhance the results. In combat, your character will attack and defend, as the GM will not roll dice in this RPG. Damage can lead to Glitches as your program degenerates. Like many RPGs that touch on technology as a base, this one offers a variety of upgrades to customize your character. 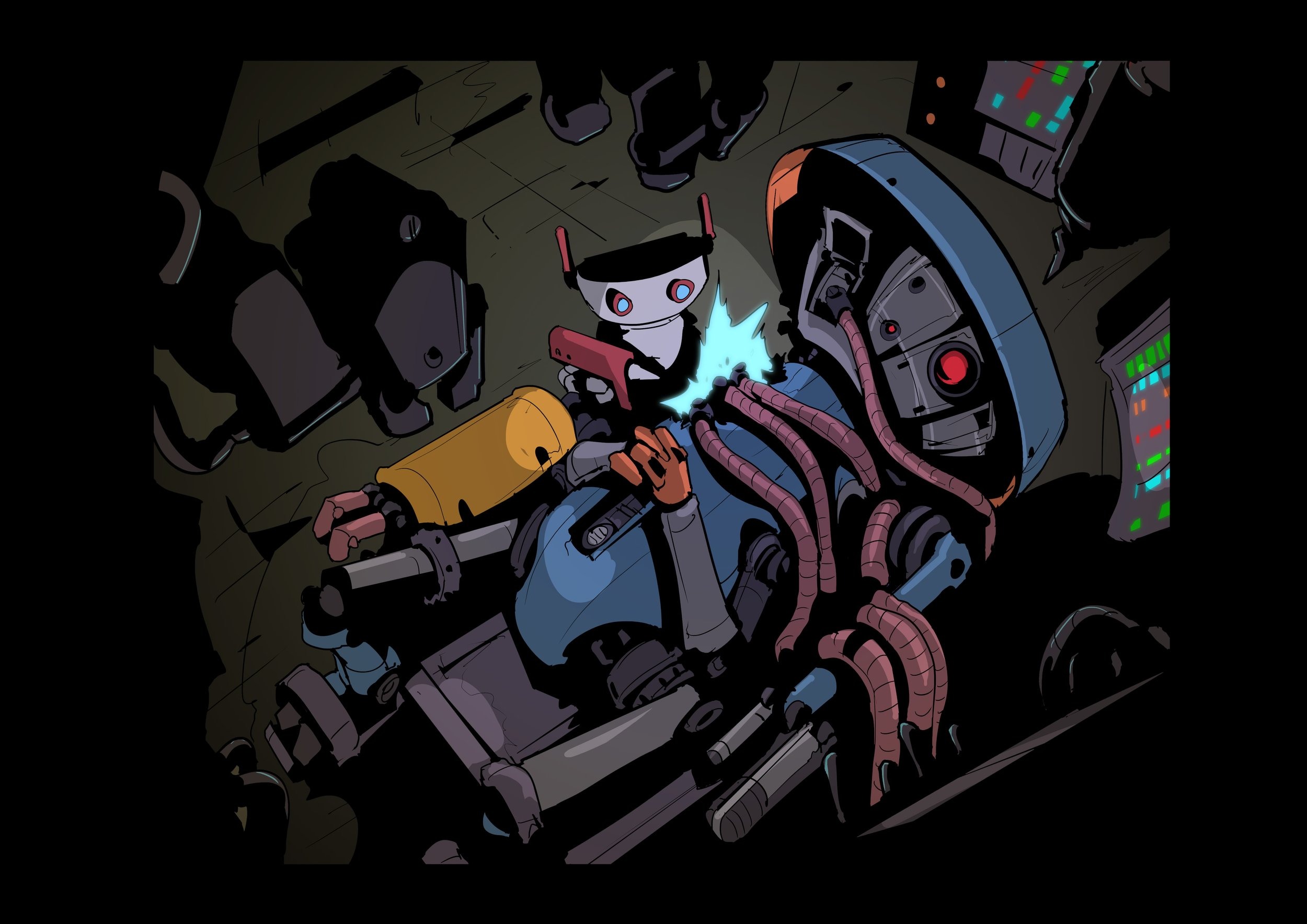 The setting has two eras, “Before the Collapse” and “During the Collapse”. When the computer is running, life is OK. When the Collapse starts, so starts the collapse of computer society. In terms of the overall tone of helplessness and despair, the game offers three modes. Easy Mode is the world of most post-apocalyptic movies; it’s bad but life finds a way. Hard Mode ratchets up the tension as the end is eventual, though it may be not soon. While Easy suggests the world will go on in a reduced gear, Hard implies that this situation is temporary and the gears may eventually strip. Finally, there is Hopeless Mode, the transmission is going to die on the next gear shift and with it, this journey. Hopeless Mode is the MÖRK BORG atmosphere I mentioned earlier, creating a dark option within a genre that leans towards action-adventure, not grimdark. If you go with Hopeless, the end is inevitable.

Environmentally, the world is a program much like Tron where there are plains, some physical features, and “rivers,” but there’s no weather, no animal life, no sun or moon (though there are cycles that amount to day and night). Ultimately, the strangeness of the setting is its disconnection from our everyday background. No breeze, no AC, no heat, no snow, no animal noises, just terrain and programs. It might be like being on the moon; there is a world, but it’s not like Earth. 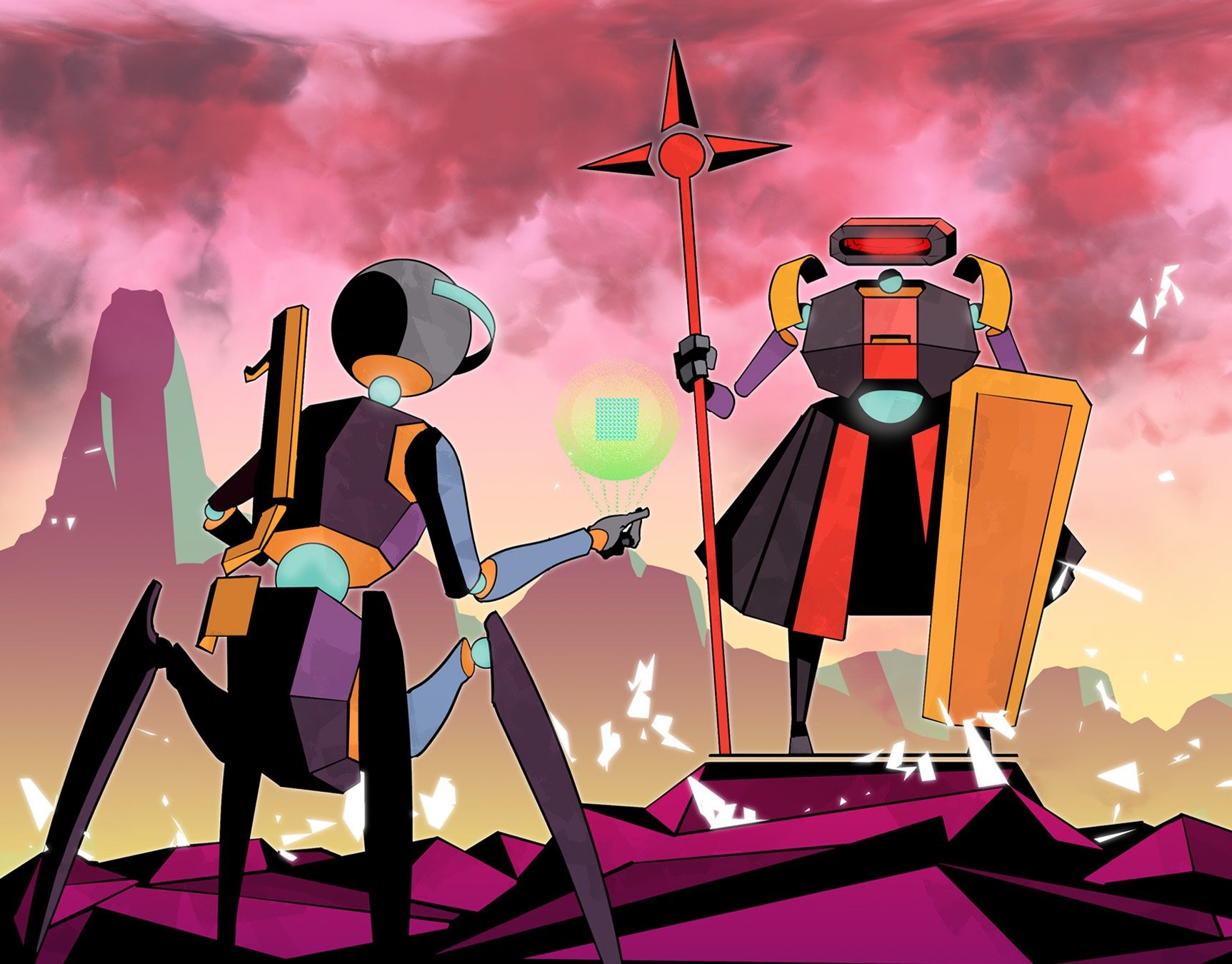 Graphically, Dan Morison delivers a Transformers G1 Marvel Comics vibe with certain elements. His grids recall Tron, especially the graphics of the TRON: Uprising TV series. The color scheme is a bright vision of Decepticons in the desert. Taken as a whole, the artwork expresses the world, it conveys the robots-in-Mad Max concept that is the root of this setting.

Is Code Warriors a next level hit like the award winning CAPERS or NerdBurger Games’ ENNIE nominated Good Strong Hands? Conceptually, Code Warriors has a stronger draw than any NerdBurger Game so far. Turning worlds like Tron and Wreck-It Ralph into apocalyptic concepts is a level of creative brilliance that should turn heads in Hollywood, comics, and sci-fi novels. This is an RPG so, like any RPG, it can be presented in several ways, but this one might benefit from a serious tone. Heroes battling against the impossible will create stories of great heroism. NerdBurger Games’ Code Warriors promises a glitchy apocalypse that only your best programs will find hope in. As an RPG, Code Warriors reaches NerdBurger Games’ lofty heights of originality and creativity. 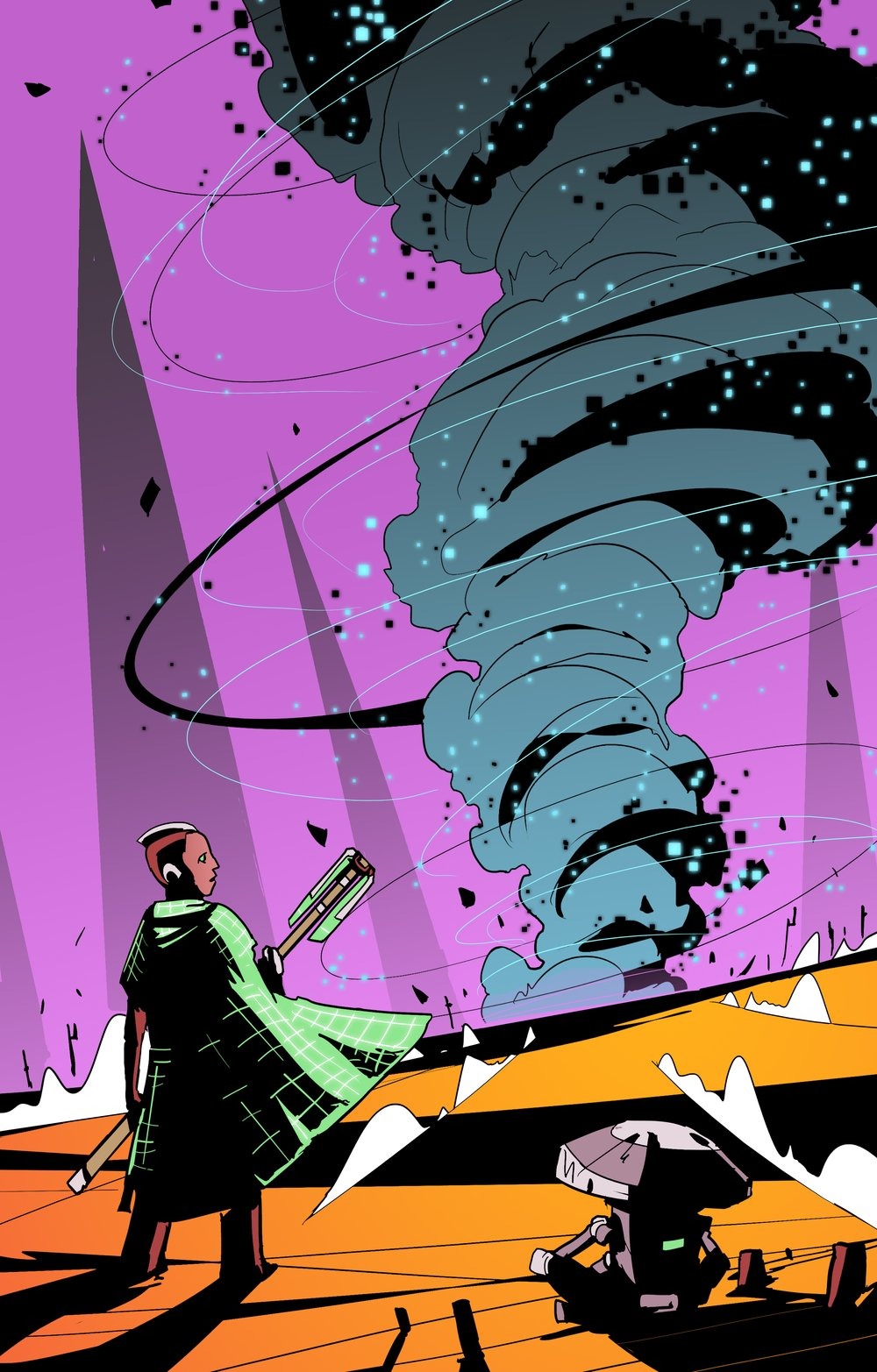