With this, every class in the Adventurer's Guide has been covered once! And for this final entry of the current season, we've got one of the absolute pinnacles of physical combat: adept/fighter.

Adepts can train as a Sentry, which makes them into an elite security expert. Able to wield polearms with greater versatility than most, they can also pick out threats quickly and use thrown weapons and items without putting their polearm down.

Fighters can become Militants, who are the ultimate martial dabblers. Instead of going deep, they go broad, learning a bit of everything, including rare weapons, an extra combat tradition, and the capability to switch weapons on the fly.

And as always, the new archetypes (or any adept/fighter combination you fancy) can be combined with the new Scrapper synergy feat chain.

As a side note: props to the A5E fighter and adept designers. This pairing works way better in A5E than it did in O5E! 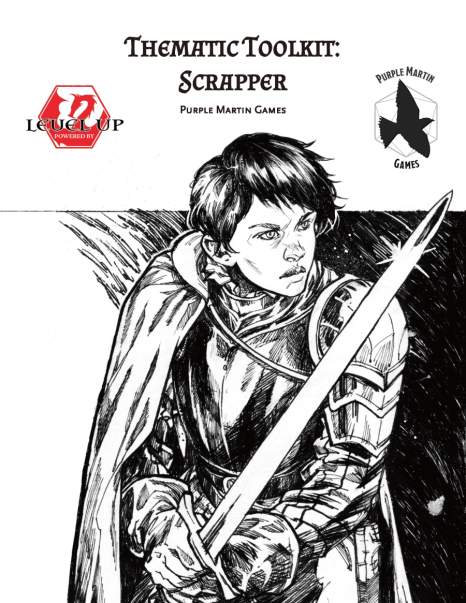 Supporter
Come on... How much of my money are you trying to take!?

Steampunkette said:
Come on... How much of my money are you trying to take!?
Click to expand...

All of it, apparently. But well worth it, yeah?

This might be my favorite TT release yet. The synergy feats are very flexible and solid enough to feel worth the investment and both archetypes provide interesting abilities that allow for multiple builds with different maneuver choices and weapon options.

I'm very excited about playing with these.

Quick question on the Scrapper feat: "Your fighter levels count as adept levels for the purpose of the Extra Attack feature."

Is that intended to be adept as fighter levels? The adept only gets Extra Attack at level 5, and given that synergy feats strongly encourage a 4/8 build, you're only getting the benefit of 1 level, which feels a little weird.

You are, but it's a timing thing.

Let's say you're in the party with someone else who's playing a single-classed adept, berserker, fighter, herald, marshal, ranger, or melee warlock. They will get their second attack at level 5. Even with this, you won't get yours until level 7. That's a long time to wait for one of the key features of both classes. Doing that sort of combination benefit means you'll get it at level 7 of your 4/8 build rather than 9. It doesn't look like a lot on paper, but you still have to play through those levels, and being a non-caster with only one attack and no damage bonus like a rogue's sneak attack until level 9 is going to be frustrating. Hence the feat benefit.

As far as the "direction," no, it's correct, but here's why: you can still get a third attack at level 11, but you're going to need to invest a focus feature choice into it (that's a key reason why the fighter levels count as adept ones for focus feature). That's a balancing choice; I try to avoid having a specific multiclass combo outshine the single-classed components in key ways, and picking the more (fighter) rather than less (adept) powerful option there would violate that.

If you really don't want to spend the Focus Feature choice, you can still take 11 levels of fighter to get it, after all. It's already part of your build.

I think he's actually six game designers in a trenchcoat.

Once a month isn't too bad for a small release like the Thematic Toolkit line, but thank you. I'm glad they continue to be worth getting.