It is my pleasure to announce that third installment of the Thematic Toolkit series, Venomous Shadow! 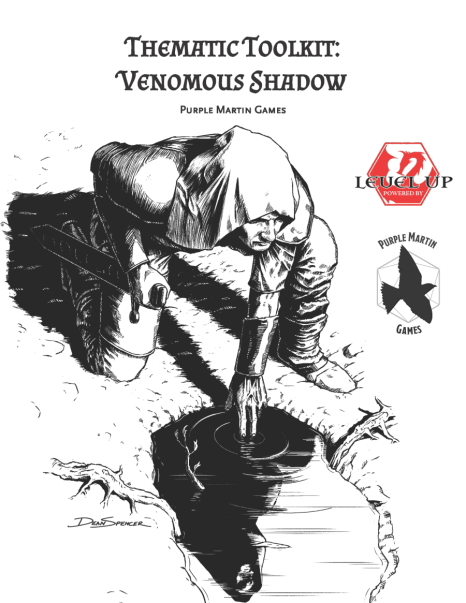 This one covers three base classes instead of the usual two. However, that's not all! This product also contains a new combat tradition!

The new Ranger archetype is called the Slayer, and it's a stealthy, poison-using, strike-from-ambush kind of character. Some hunt criminals. Some hunt monsters. Some hunt who and whatever they're paid to hunt. Hope and pray that one never decides to hunt you.

The new Rogue archetype is the Poisoner, an unparalleled master of toxins. From a little arsenic in a drink to a toxic booby trap planted on an enemy, they can do everything you'd expect—and a few things you might not!—with poisons.

Wizards can now train as Venomancers who can infuse their spells with poison, poison an enemy's magic as they counter their spells, and perform other fearsome feats of toxic trickery!

Rogues and rangers also can access the new Viper's Fangs combat tradition, with maneuvers allowing you to use your consumables in exciting new ways. You'll never look at a vial of basic poison the same!

And even if poison isn't your thing, the new synergy feat chains allow you to make whatever ranger/rogue, ranger/wizard, or rogue/wizard combination you desire absolutely sing.

Ranger/Rogues gain access to the new Stalker synergy feat chain. If you've ever wanted to make the ultimate stealth specialist, this is your chance!

Or maybe Ranger/Wizard is more your speed. in that case, you can take the Arcane Scout chain and blend the supernatural awareness that magic provides with your ranger training to become the master of awareness and wilderness travel.

And Rogue/Wizards can now take the Underworld Mage chain, gaining the ability to encode their spellbook, do way more than normal with mage hand and even learn spells they save against! Full disclosure: I -will- be working with Purple Martin Games to produce 3PP material for Level Up. Timespike, here, is the reason I'm writing for the Gate Pass Gazette, EN5ider, Voidrunner's Codex, and more.

I owe him a lot and he's a cool dude. If you get the chance to pick his brain: DO IT.