Hello everyone, Darryl here with this week’s gaming news! ENnie Award voting is now live, new release for Shadowrun, the Dune RPG gets a new sourcebook already, a Magic: The Gathering deck has been copyrighted, and more!

Don’t forget, you can get all the news every week with Morrus’ Unofficial Tabletop RPG Talk! This week, Morrus and Peter are joined by Mark Greenberg to talk about Necropolis from Necromancer Games. 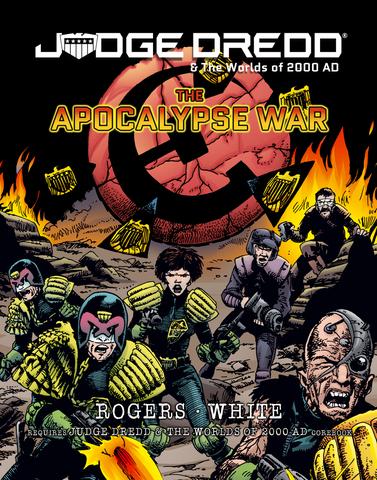 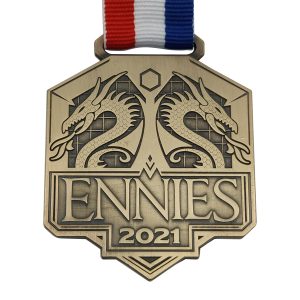 Voting for the 2021 ENnie Awards is now live in all categories. The full list of nominees and Judges’ Spotlight winners were announced last Friday with voting going live this past Wednesday. For those of you who follow social media closely and jumped into voting immediately, there is a problem. The voting system encountered an issue and the ENnie Awards had to reset all voting data effective to 10:45 PM Eastern on Wednesday, so all votes cast before then have been purged. IP addresses have been reset and all those who have voted who are unsure if their vote counted have been encouraged to vote again. If you receive a message that you cannot vote again, your vote was already counted. The ENnie Awards will be streamed live from Gen Con on September 17 starting at 9 PM Eastern (5 PM Pacific, 2 AM BST).

We’ve got a lot of new announcements for licensed Dungeons & Dragons miniatures. First, from Gale Force 9 is the Drizzt and the Companions of the Hall set. This set features Bruernor Battlehammer, Regis, Wulfgar, Catti-Brie, Guenhwyvar, and of course Drizzt Do’Urden. These miniatures will be unassembled and unpainted and is available for pre-order now for an MSRP of $50. WizKids has a new announcement as well, a foot-tall emerald dragon coming this November for $99.99. And coming in January 2022, the new D&D Frameworks line is set to launch featuring unpainted and unassembled sprue miniatures (meaning the plastic minis are still on the sprues from the molds). ICv2 has a preview of the eleven monster miniatures from the line: At $14.99 each are the Wight and Mind Flayer, at $24.99 each comes the Beholder, Troll, Night Hag, Drider, Ghast & Ghoul, Minotaur, Ogre, and Basilisk, and finally a Hill Giant for $39.99.

Innovative and influential game designer Steve Perrin passed away this week. Perrin used the alternate rules he created for Dungeons & Dragons as the foundation for a roleplaying game set in Greg Stafford’s world of Glorantha, RuneQuest. Michael O’Brien from Chaosium posted a six-part series by Perrin on the creation of RuneQuest to ENWorld in tribute. Be sure to scroll to the comments for all six parts. Roleplaying industry historian Shannon Appelcline also posted a retrospective of Perrin’s work across the years. Perrin was 75 years old. 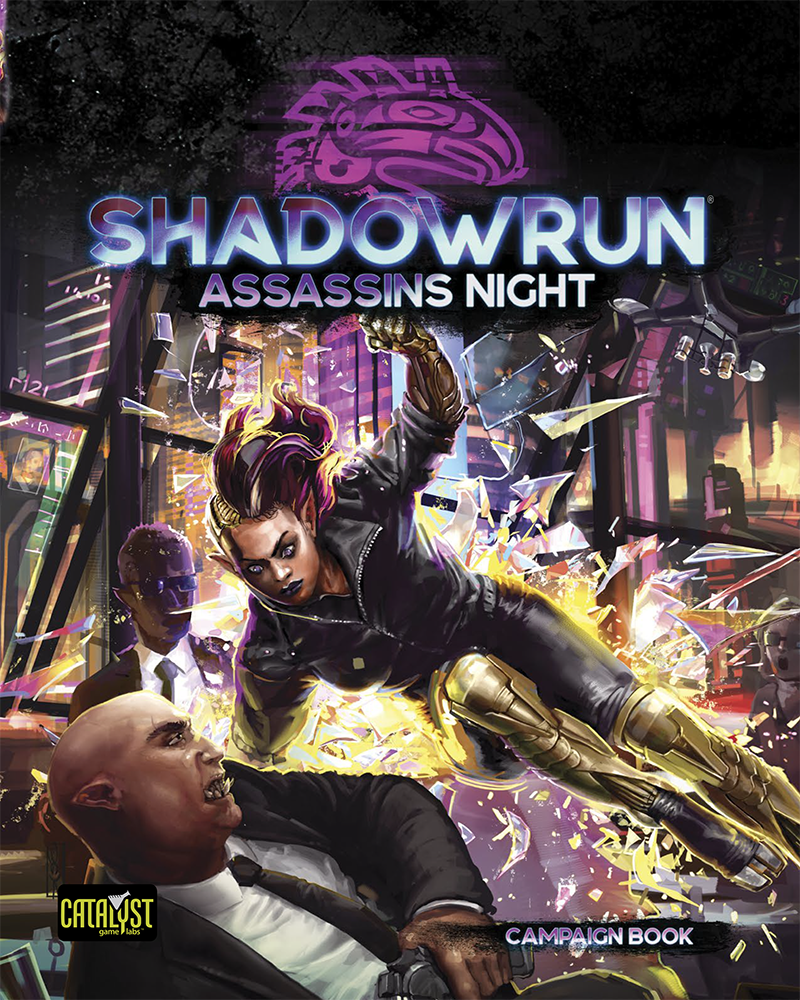 Catalyst Game Labs released the new Shadowrun adventure, Assassins Night. Set in the city of Barcelona, the mystery plot involves an assassination, but the players will be left to figure out not just who the assassin is but who the target is and where it will go down in events that will directly affect the Shadowrun setting in major ways. The campaign is set up similar to the previous Shadowrun 6th Edition campaign 30 Nights as it is broken up into 35 different session-length setups that tell a linked ongoing story. This gives gamemasters the ability to skip some missions or shuffle them around as necessary based on player actions or to insert other adventures in between events of the open-ended mystery plot. The PDF is available for $19.99 on DriveThruRPG now. 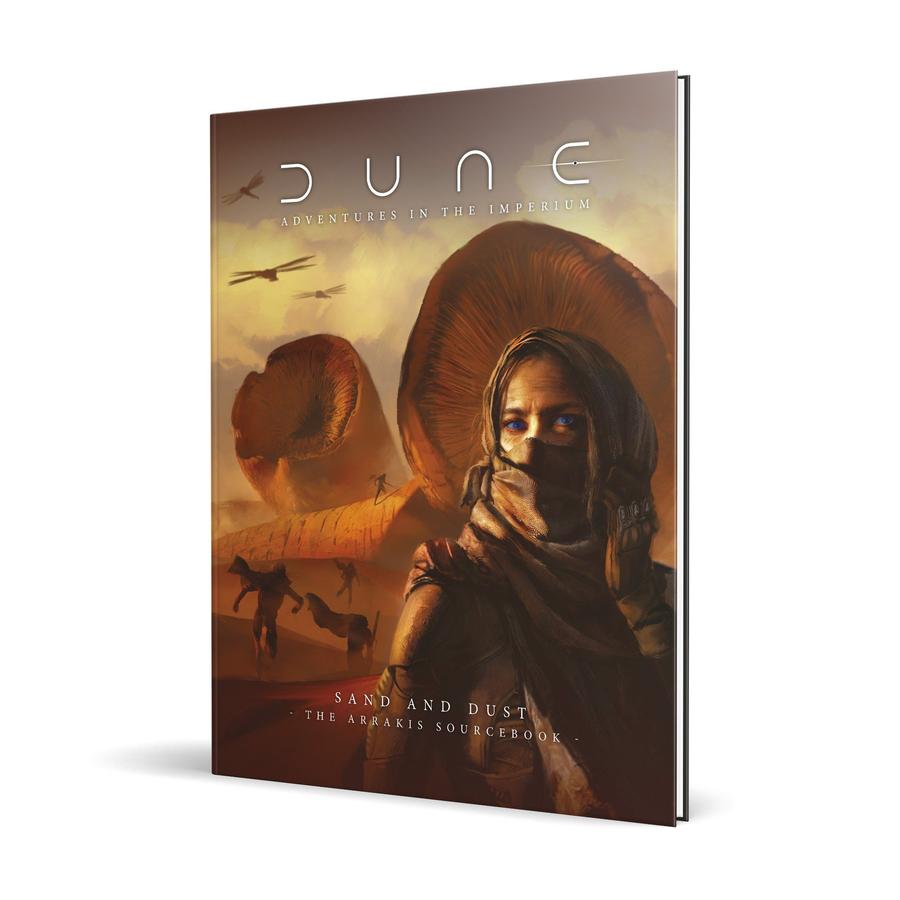 Modiphius announced the first sourcebook for the Dune Adventures in the Imperium game, Sand and Dust. The 156-page sourcebook features an overview of the planet Arrakis, the native Fremen and their culture, details on spice harvesting and smuggling, a gazetteer of the cities of Carthag and Arrakeen, character options for Fremen player characters, new campaign options for smugglers and merchants instead of agents of a noble House, and a complete adventure titled “The Water Must Flow”. The book is available for pre-order now from the Modiphius store for $42 with an expected December release. 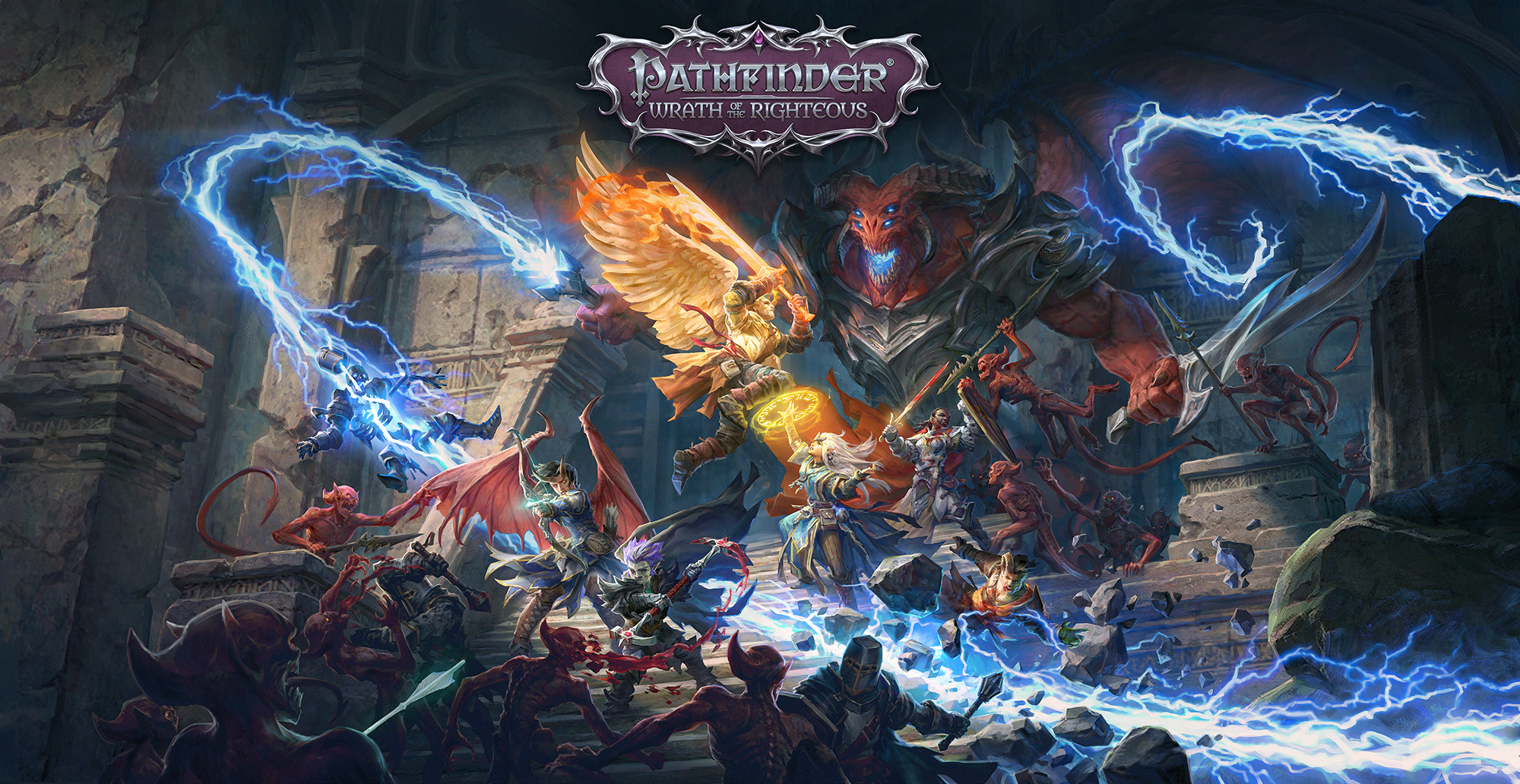 The release of Pathfinder: Wrath of the Righteous is coming in just a few short weeks and both Owlcat Games and Paizo have plenty of previews. The game is based on the Pathfinder Adventure Path of the same name where the party must protect the world from a horde of invading demons. Like the previous Pathfinder: Kingmaker from Owlcat, the game is based on the Pathfinder 1st Edition rules (as this game was in development before the release of the 2nd Edition of the tabletop game rules). A final gameplay trailer came out on August 10, and full pre-order details were made available. The Core Edition features the base version of the game for $49.99, the Commander Edition adds on a digital artbook and soundtrack plus a worldmap and four in-game items (magnificent plume hat, dashing cavalier’s gloves, righteous exorcist’s bracers, and ratcatcher’s goggles) for $69.98, and the Mythic Edition which includes all of that plus a season pass for all future DLC for $98.97. All pre-orders also come with a bonus owlcat pet, a silver tongue amulet, free dancer’s boots, and three skins for animal companions. The game will be available on PC and Mac platforms on September 2, while console versions for PlayStation 4 and Xbox One will come on March 1, 2022. 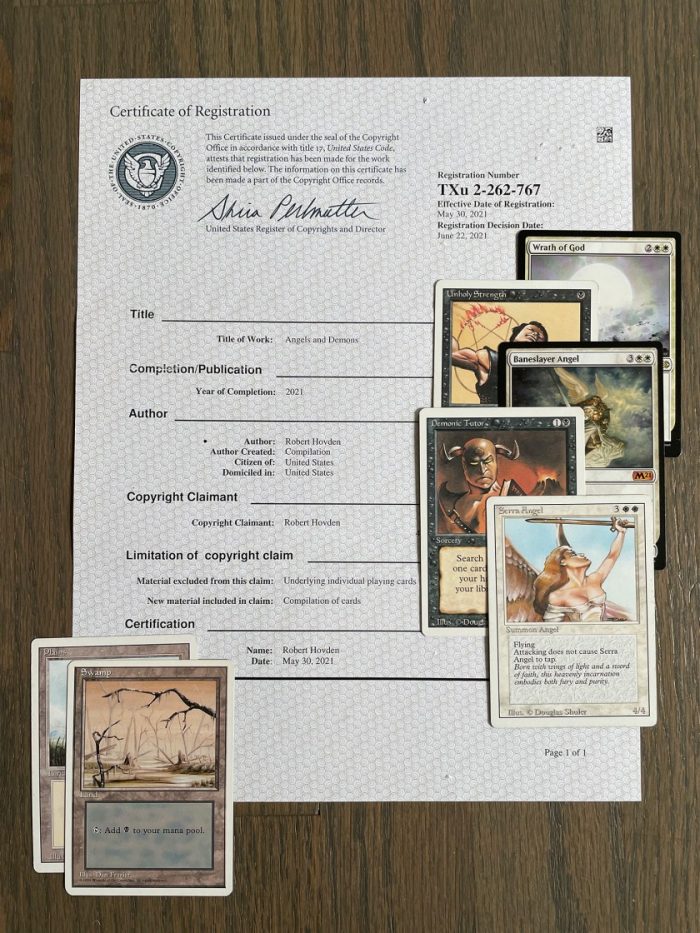 Copyright “provocateur” Dr. Robert Hovden filed and received a copyright for his deck of Magic: The Gathering cards titled “Angels and Demons”. Hovden claims that his arrangement of the intellectual property of Wizards of the Coast results in a unique expression and thus is protected under United States copyright law. In public statements about the registration, Hovden has implied that he has the legal authority to prevent the use of his copyrighted deck for use in tournaments. Some in the Magic: The Gathering community expressed concerns that the tournament landscape may become a race to file a copyright on specific decks in order to prevent others from using them.

While “thin copyrights” exist for collections and compilations of material to protect the expression of creativity in assembling them, the law does not necessarily apply to straight lists of information. Two examples given in the Bell of Lost Souls coverage include a travel guide as a curated list of attractions in a city (protected because it is an expression of stating which attractions are worthy of note) versus a recipe (which is not protected as a list of ingredients and preparation steps, which is why so many online recipes start out with a full narrative about the recipe in order to provide protection). Of course, bringing these questions into the light is the entire point of these exercises for the physics professor, who previously registered copyrights for works of M. C. Escher printed at the nanoscale in order to challenge the limits of fair use. You can find a detailed analysis of the “Angels and Demons” copyright from the website of free speech and open source advocate Cory Doctorow. 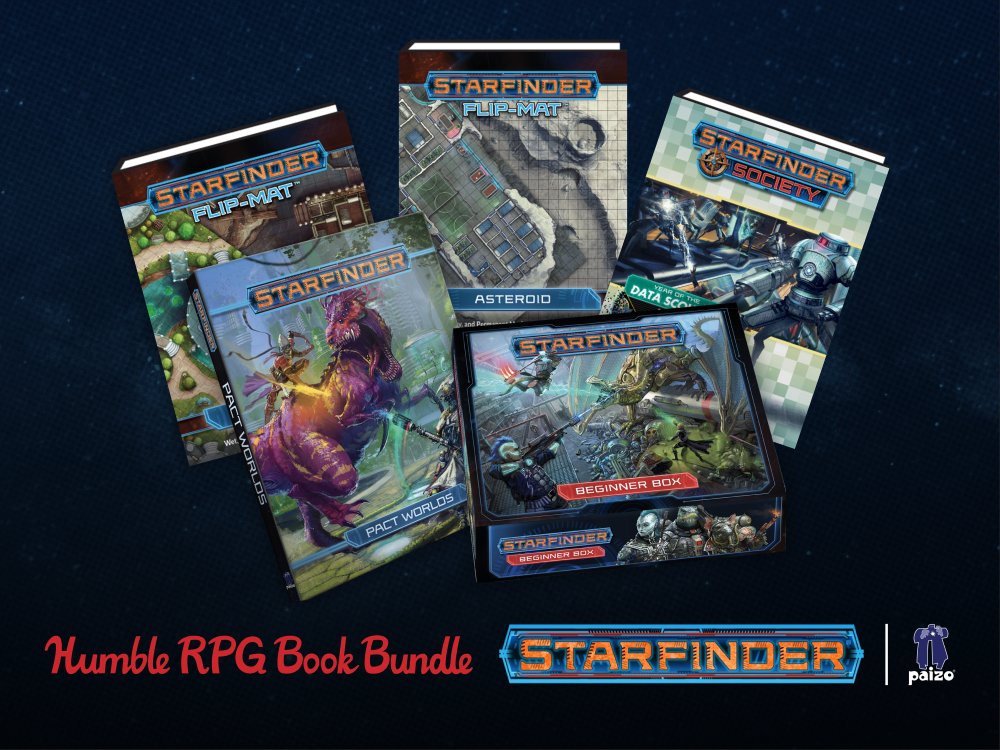 Humble Bundle continues to hunt for the wallets of tabletop gamers with their plethora of RPG-related bundles available now. The Starfinder Book Bundle from Paizo features four levels ranging from $5 to get the core rules and more all the way up to the $50 level that features a total of 36 digital items plus the hardcover print version of Starfinder Pact Worlds and the physical boxed set Starfinder Beginner Box.This bundle benefits Comic Books for Kids! and runs until Thursday, August 26. The 13th Age Treasures! Maps! Adventures! Bundle is also in its final week, offering an entire library for the fantasy roleplaying game. This bundle runs until Thursday, August 26 and supports Oceana (supporting the reduction of plastic pollution). Modiphius has the Mutant Chronicles Book Bundle featuring rulebooks for both the Savage Worlds and the 2d20 System versions of the post-apocalyptic RPG plus STL files for 3D printer owners to print their own miniatures. This bundle runs until Thursday, September 2, and benefits the NAACP Legal Defense Fund. And don’t pass up the Big Brain Bundle of strategy games featuring BattleTech based on the tabletop wargame and roleplaying game which includes other strategy games such as XCOM 2 and 7 Billion Humans. This bundle runs until Wednesday, August 25, and benefits the charity of your choice.


That’s all from me for this week! Don’t forget to support our Patreon to bring you more gaming news content. If you have any news to submit, email us at news@enpublishingrpg.com, and you can get more discussion of the week’s news on Morrus’ Unofficial Tabletop RPG Talk every week. You can follow me on Twitch to get notifications when I go live, subscribe to Gamer’s Tavern on YouTube for videos on gaming history, RPG reviews, and gaming Let’s Plays, or you can listen to the archives of the Gamer’s Tavern podcast. Until next time, may all your hits be crits! Note: Links to Amazon, Humble Store, Humble Bundle, and/or DriveThru may contain affiliate links with the proceeds going to the author of this column.
Last edited: Aug 21, 2021
Click to expand...

Abstruse said:
The game will be available on PC and Mac platforms on September 2, while console versions for PlayStation 4 and Xbox One will come on March 1, 2021
Click to expand...

Wait: the console version came out before the PC version?

Weiley31 said:
Wait: the console version came out before the PC version?
Click to expand...

... "with console adaptations for PlayStation 4 and Xbox One following next spring, on March 1, 2022" is what the link says.

My fault. I've been writing 2020 for like two months now for some reason and keep having to hammer myself mentally "No, it's 2021". Apparently, it worked too well. Article's been updated.

Crusadius said:
... "with console adaptations for PlayStation 4 and Xbox One following next spring, on March 1, 2022" is what the link says.
Click to expand...

Dang, either I was tripping balls and mistook that or it got edited shortly before I saw it and got confused.

Weiley31 said:
Dang, either I was tripping balls and mistook that or it got edited shortly before I saw it and got confused.
Click to expand...

The link was correct. I typed the wrong year originally but have I edited it.