My recent D&D session at Boy Scout camp forced me to make some hard choices about what maps I could realistically bring with me. So which maps work best? 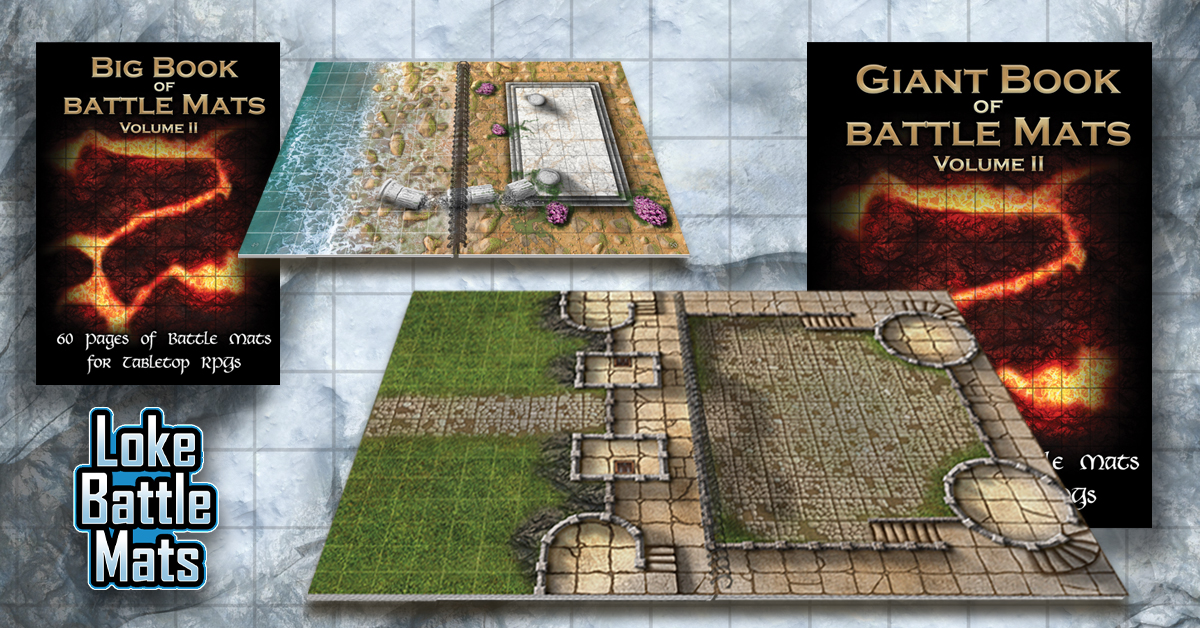 I'm a big fan of large, book maps. I have the two major brands, Loke and Yarro, and they differ in important ways.

Loke Battle Mats are clean, digitally drawn maps of a wide variety of locations, grouped together by genre. They are spiral bound, which is important in keeping them flat. Some of the maps can encompass two pages. At 16" by 12", the Giant Books can cover quite a bit of ground, opening two a two-page spread of 16" by 23".

Yarro Battle Maps are similar, but the maps are hand drawn. Unlike Loke mats, Yarrow maps are perfect bound, which can cause some issues with flattening out the map when you two page spreads. Additionally, you can't help but use the entire spread, because the book needs to lay open to turn to any page.

The key to both these sorts of maps is that they are fixed art that will only apply to particular situations in a campaign, so the GM needs to know which map will apply to which encounter ahead of time. In this regard, an index to what each map represents is key; without it, flipping quickly to a map becomes a chore. Yarro has an index built in, Loke features small thumbnails.

Beyond that, your utility with these maps really depends on what encounters you plan to use. With all the basic settings covered (a camp site, a tavern, a dungeon, a castle), the maps' usefulness depends on what a GM plans to use in their campaign.

One thing that's missing from all these maps are thematically-connected maps that detail the same area from a different perspective. There's lots of village rooftops and village interiors, but there aren't a sets of maps of the village rooftop, the interior, and their basements. In my experience, an encounter can end up in any of those three locations.

The downside of book maps is they're awkward to store and heavy to carry. I didn't bring these maps along on the camping trip for that reason. 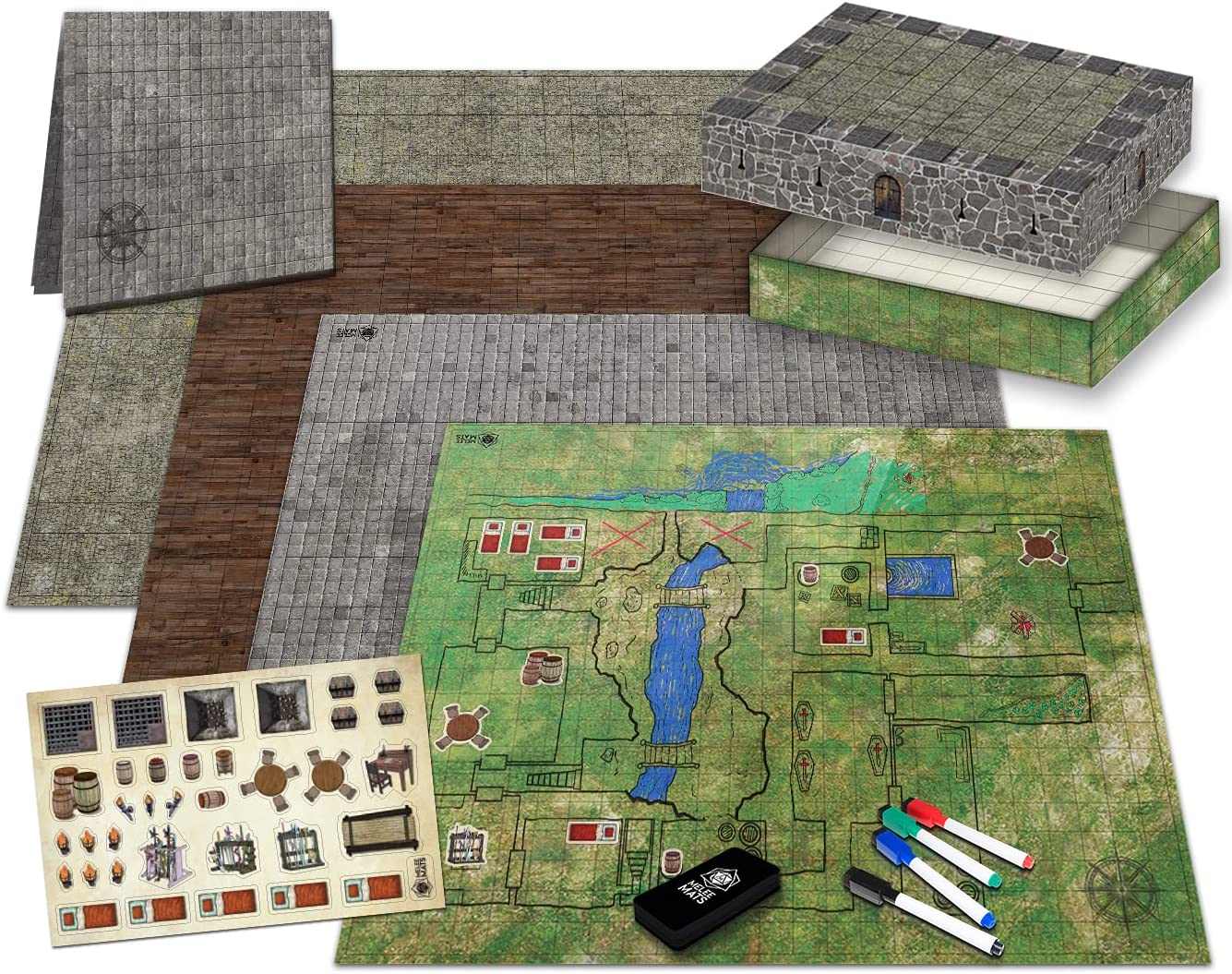 Board game maps use the fold-up board game format that's popular these days with boxed games, in that it four quadrants of the map fold down into one quarter of its size. This increases portability and makes the map easier to store.

There are tradeoffs however. The cardboard maps are individually heavier than a roll-up map or a book map, meaning the more you carry, the more it weighs. Sizes vary too. Some are the size of regulation chess boards, like The Master's Atlas, which are much heavier than customized versions that are the size of a typical Dungeons & Dragons hardcover.

I'm partial to the smaller board game maps, like the Ultimate Battle Grid Game Board and Hexers Role-Playing Game Board Mat. But when weight is a consideration their limited flexibility can make them as impractical to carry as one of the heavier book maps. 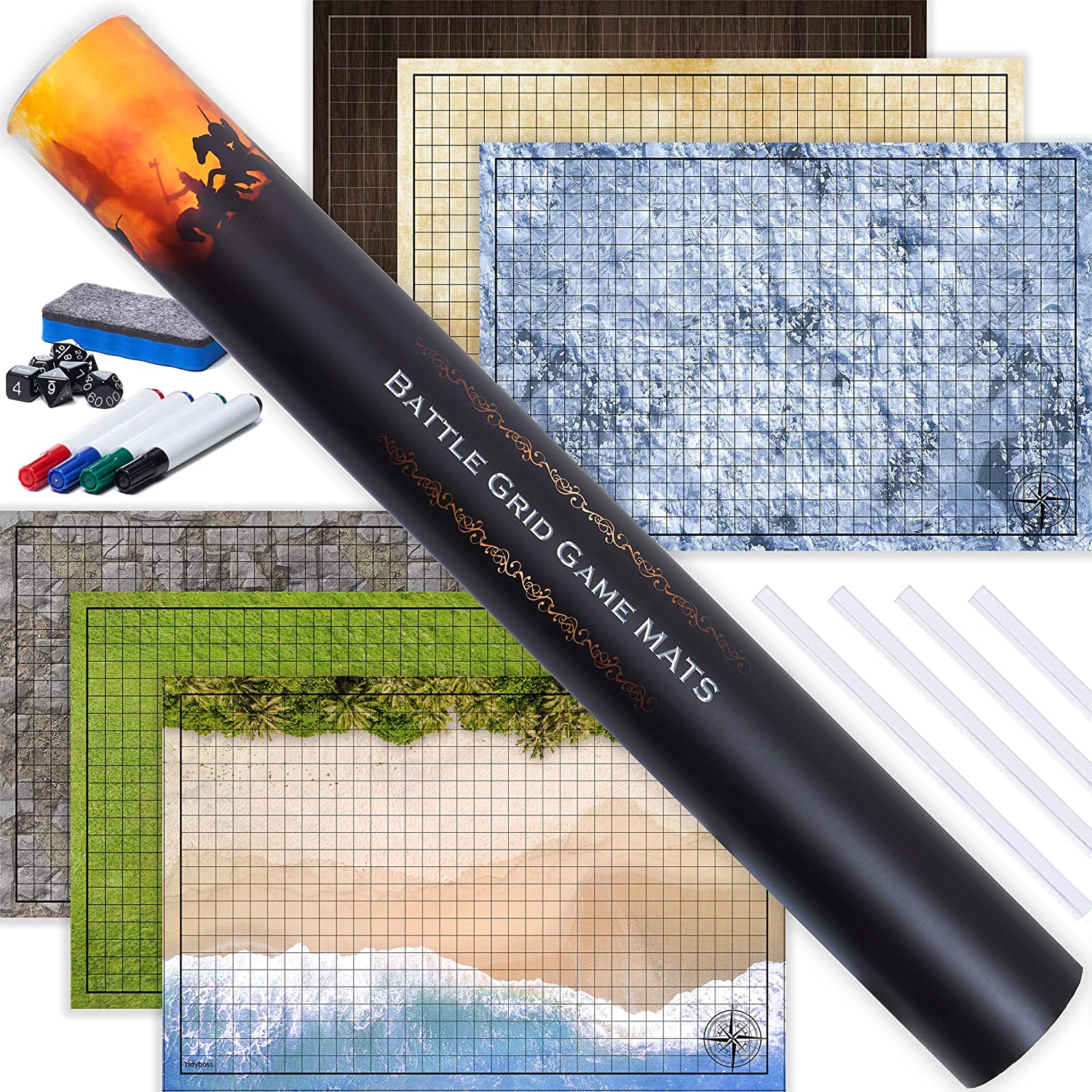 The other format is the folded or rolled-up map. Both have a significant advantage in their size. Unlike book maps, most maps of this type tend to be of a large swath of terrain, with the assumption that the GM will overlay unique features on it. The most common maps are dungeon stone, grasslands, and swamp features.

These maps are usually meant to be drawn on or have scatter terrain added to it, like the Dungeon Craft's Ocean Battlemap, which folds up to neatly fit with your books. Others are much larger, like Melee Mats. From a utility standpoint, these maps can be rolled up for easy transport. There are limits though, as a very wide map won't easily fit across your backpack.

I ended up choosing Tidy Boss's Battle Game Mat, which solves several problems: it comes with its own carrying case, it uses plastic straightening clips to keep the map flat, and it covers a wide range of terrain that I might use in a game: beach, grassland, snow, stone, wood, and parchment. This was the map I ended up taking with me on the camping trip.

I’ll have to check out those Tidy Boss maps and clips, neat idea.

I still use some of the Paizo map packs that are double sided. Mats by Mars are also high quality mats I’ve purchased.

Staff member
I'm a fan of the Loke mats.

And I can't be without my Paizo flip-mat collection. I've gotten most of those, and they're really useful.

I dislike any product that's so precise that it only applies to a very select number of situation. There's ton of gorgeous maps online, but buying a map of a dwarven forge is not useful as I've had such a location maybe once in ten year in my games. This is why I don't buy any of these kind of maps.

I opted for a battlemap that can be rolled. I have a tubular over-the-shoulder carry case in which I can put it once rolled. I can quickly doodle the layout of the room. I can erase, redraw, etc. If I need something much bigger or with multiple room (I generally know in advance), I'll do a layout and print it at my local print store as an engineering blueprint.

For TTRPG, I made my own map grids from pieces of faux leather. I found a grey crocodile for dungeons and a generic "leather" for desert and grass is appropriate colors. I do have a few of the Paizo flip-mats and the giant book of maps. For online maps, I use the Fantasy Grounds map-making built into the program. Fantasy Grounds is my preferred VTT.

I've got the Tidyboss set (I think it was a Christmas idea from your post last year). It works well!
I have had a couple of marker marks not erase well. Not sure if that's the plastic or the marker's fault though.

I am lucky enough to own all the maps from the old DnD skirmish game......they are great for travel or home use.

For home use, I prefer a really big map with tiles. (I'm leaving out 3D terrain for this discussion). There are a massive amount of great tiles you can print out (skeletonkey games being a favorite).....

That was an interesting and informative comparison. My group used a large flat one-coloured map, when we played at a physical table. One side had squares, the other hexagons, and we drew on it with different coloured markers. Just need a damp cloth to clean it. I do not think it was that portable though.

When doing con demos, I prefer Loke spiral map books. They fit the suitcase and cover enough situations and they are dry erase either way.

I'm a big fan of the Hexxers dry erase grid boards. They are white with black lines and don't have actual maps, but with some dry erase pens they are perfect for mapping out situations.

One of my groups got me the rolled neoprene mat from Abishai. It's gorgeous, and has a clear vinyl overlay that can be clipped down for writing on and covering poster or homemade maps. The included markers and tiny eraser work fine, but I supplemented them with larger, nicer brands and they fit in the case just as nicely. It's easy to carry and well worth the few extra ounces.

I got by for years with a couple of Paizo flip mats. Lightweight, portable and cheap. If I needed an easy to transport battlemat, that would be my first choice.

When playing at home I now prefer tiled or jigsaw battle mats for my games. They’re bulkier than the flip mats and more expensive, but you don’t have any issues with the map not sitting flat or running off the map edge like you do with flip mats. You can just lay down another time.

In the tiled battlemat space, I used Tact-Tiles for several years, before replacing them with a similar product by Role 4 Initiative that had the added advantage of both large and small tiles. I also tried out the Gaming Paper tiles for a bit. They are a cheap option, but made of a pressed cardboard that I found started to delaminate with repeated use.

A couple of months ago I received my Kickstarter of Mimic’s Grid tiles from Cursed Crypt. They are everything I could want in a battlemat tile and more. The tiles are made out of a laminated metal with a soft neoprene base.

All the tiles are square and join by magnets, so are quick and easy to place on the table. Where they stand out from other tiled battlemats is that they’re magnetic and you can get both printed magnetic background sheets in themes (i.e. deep sea, grassland, lava) or of specific sites (i.e. a gladiator arena or an inn) as well as magnetic sheets of individual map elements (i.e. trees, wagons, treasure, crates, rocks, etc.) that are stackable. So you can have an inn with 3 floors and stack the floors on top of each other, or have the various levels of a ship stacked on top of each other.

The major downside of these tiles are their cost, but I feel like they’re worth it if you’re like me and have searched for years for the perfect mapping solution.

I don't know the company. But I bought my first two sets of wet eraser one inch hex/square in 1983. Took a couple of minutes to lie flat. But they were cloth backed. And washable. On gentle. I gave them away during the 2008 game purge.