​
Don’t forget, you can keep up with all the week’s gaming news in detail with Morrus’ Unofficial Tabletop RPG Talk! This week, Morrus, Peter, and Jessica talk about the controversy around “evil races”. 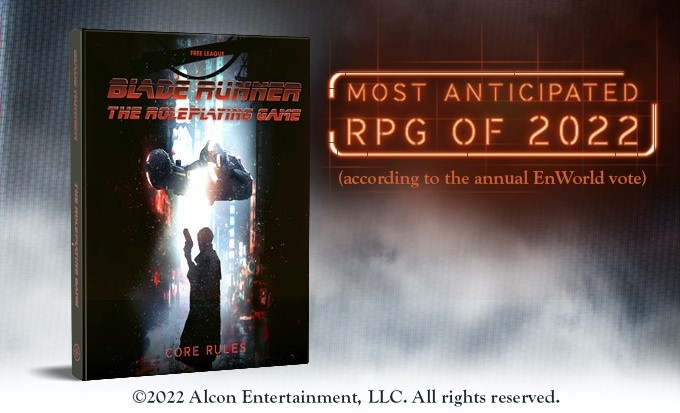 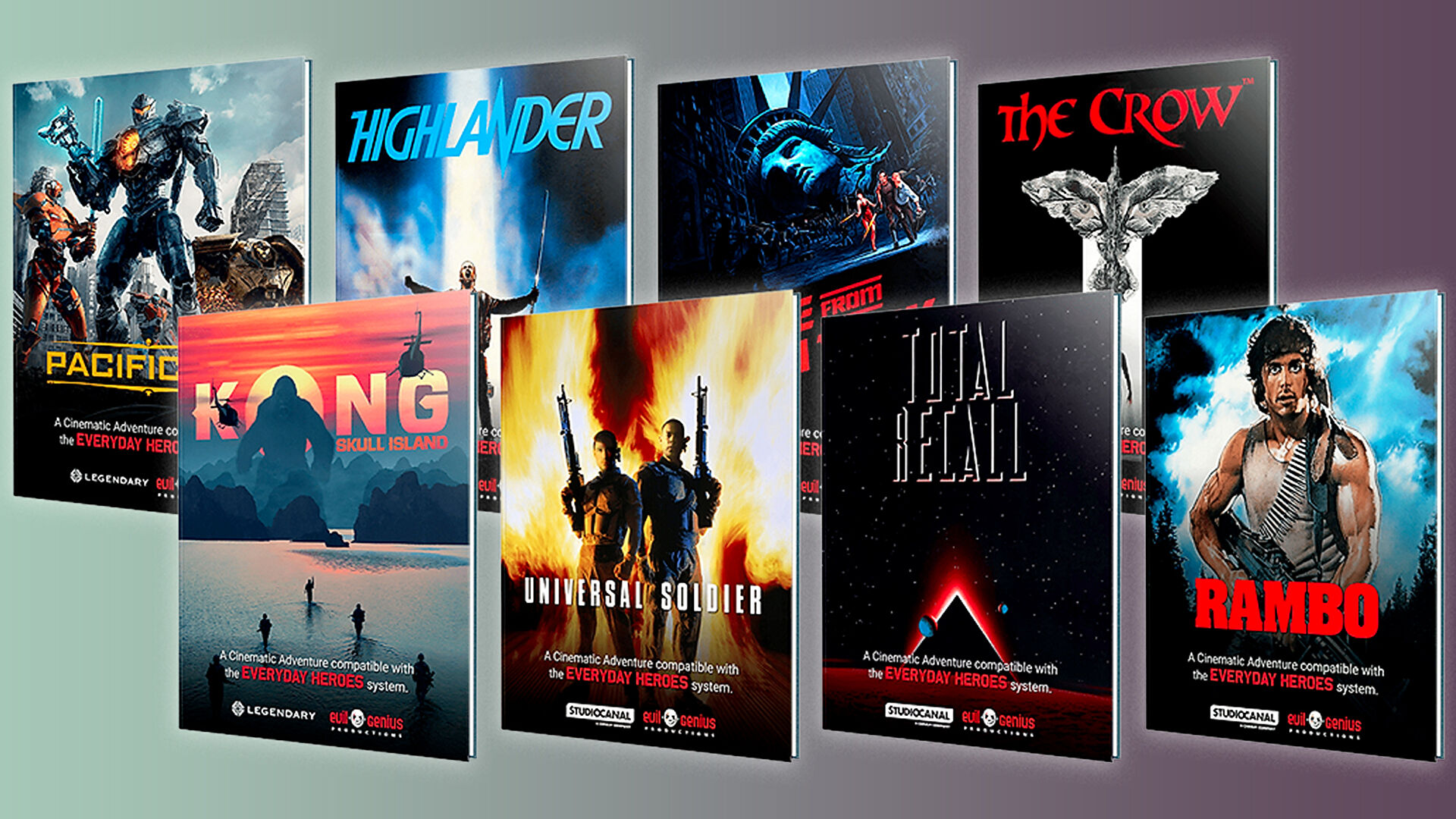 Earlier this year, Evil Genius Games announced their reboot of D20 Modern and, boy, is there an update. Not only will they have a licensed setting, but a lot of licensed settings. Announced so far are D20 Modern tie-in settings for Rambo, Pacific Rim, Highlander, Kong: Skull Island, The Crow, Universal Soldier, Escape from New York, and Total Recall. Each setting will also have its own new class: Twins for Pacific Rim, Monster Hunter for Kong: Skull Island, Immortals for Highlander, The Possessed for The Crow, Street Warrior for Escape from New York, Mutants for Total Recall, Cyborgs for Universal Soldier, and Guerilla for Rambo. The Kickstarter for D20 Modern: Everyday Heroes is scheduled to launch on May 17.

Paizo announced a new audio adventure for Pathfinder coming to mobile devices later this year titled Shardfall. The adventure will be set in the Shackles, the heart of the high seas in the Lost Omens setting, as the player will survey uncharted islands and investigate an unknown magical phenomenon that could shift the power of the region. The adventure will be produced by Wanderword, who previously released the six-episode-plus-prologue Starfinder audio adventure released through 2019 and 2020 available on Amazon Alexa devices. While few technical details are available yet, the “mobile devices” announcement indicates this new Pathfinder adventure will be accessible on more devices and Wanderword advertises its engine works on iOS, Android, and Google Assistant as well as Alexa. More details will be announced later and the app is expected for a Summer 2022 release. 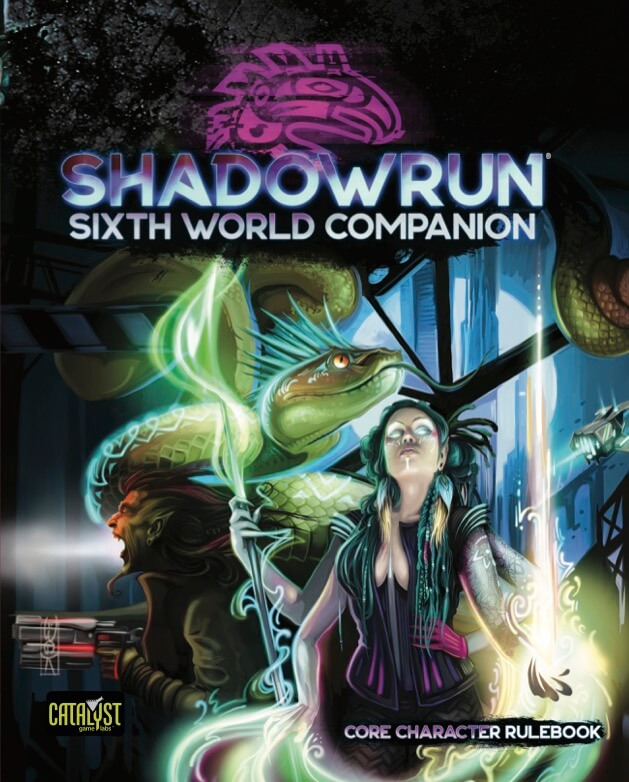 Catalyst Game Labs announced several new Shadowrun products including a long-awaited sourcebook for Shadowrun Sixth World Edition. The Shadowrun Sixth World Companion is one of the core sourcebooks for the Shadowrun system that adds a slew of new character creation options. New qualities, new metatypes, optional rules, and more and, if it’s anything like previous releases, includes a lot of options that many Shadowrun veterans consider almost essential. The hardcover and PDF versions will be available later this month.

And I am personally thrilled to see that the Matrix sourcebook Hack & Slash finally has a release date! For those who don’t know, my username “Abstruse” comes from my Shadowrun 3rd Edition decker character, so I am very much looking forward to this book full of new programs, qualities, complex forms, and more expanding the hacking rules for Shadowrun Sixth Edition. And for quick reference, the Program Deck is also on its way featuring reference cards for the various decking programs available in both the core rules and this new expansion. Hack & Slash is set for release in late summer/early fall.

The announcement also contained several new fiction releases and reprints of classic Shadowrun novels and short story collections, but the biggest outside the RPG books has to be Shadowrun: Edge Zone Upgradable Card Game. This living card game is based on the Shadowrun Collectible Card Game released in the 1990s with new art and rules updates. The game will launch with two pre-build decks, one focused on magic and the other on technology, that can be played right out of the box or mixed and matched to create exactly the deck you want. No release date is available yet.

On Friday, April 29, GAMA announced that their annual convention Origins Game Fair would rescind its mask mandate and make mask-wearing “highly recommended” but not mandatory. This announcement came just three days before the May 2 deadline to request refunds for attendee badges (with a 10% service fee) and after the cancelation window for vendors. After backlash to the announcement, GAMA (Game Manufacturer's Association, the tabletop gaming industry trade organization and the group behind Origins Game Fair) stated they would extend the rollover window for vendors until May 11, but the organization has not extended the refund deadline for attendees, which has now expired. This change in health and safety policy came just days before news broke that a convention volunteer at PAX East passed away due to a COVID-19 infection she received at that event. While the Origins Game Fair Twitter account is still online, the official GAMA Twitter account appears to have been deactivated or deleted. ICv2 reports that the GAMA reported a return to profitability in 2021 with a $182,000 net profit for the year, following a loss of $221,000 in 2020.

Gen Con announced that the Pop-Up Gen Con events will go on hiatus in 2022. Pop-Up Gen Con began in 2019 as a retail initiative to bring Gen Con to local gaming stores across the country. Events include game demos and newly released products available in gaming stores. The program was put on hiatus in 2020 due to the COVID-19 pandemic but was brought back in 2021. ICv2 reports Gen Con has put the program on hiatus to “focus our resources and attention on making Gen Con Indy 2022 a truly spectacular return to pre-pandemic scale in celebration of 55 years of Gen Con”. Plans are in the works to revive the program in a “revamped” state in 2023. 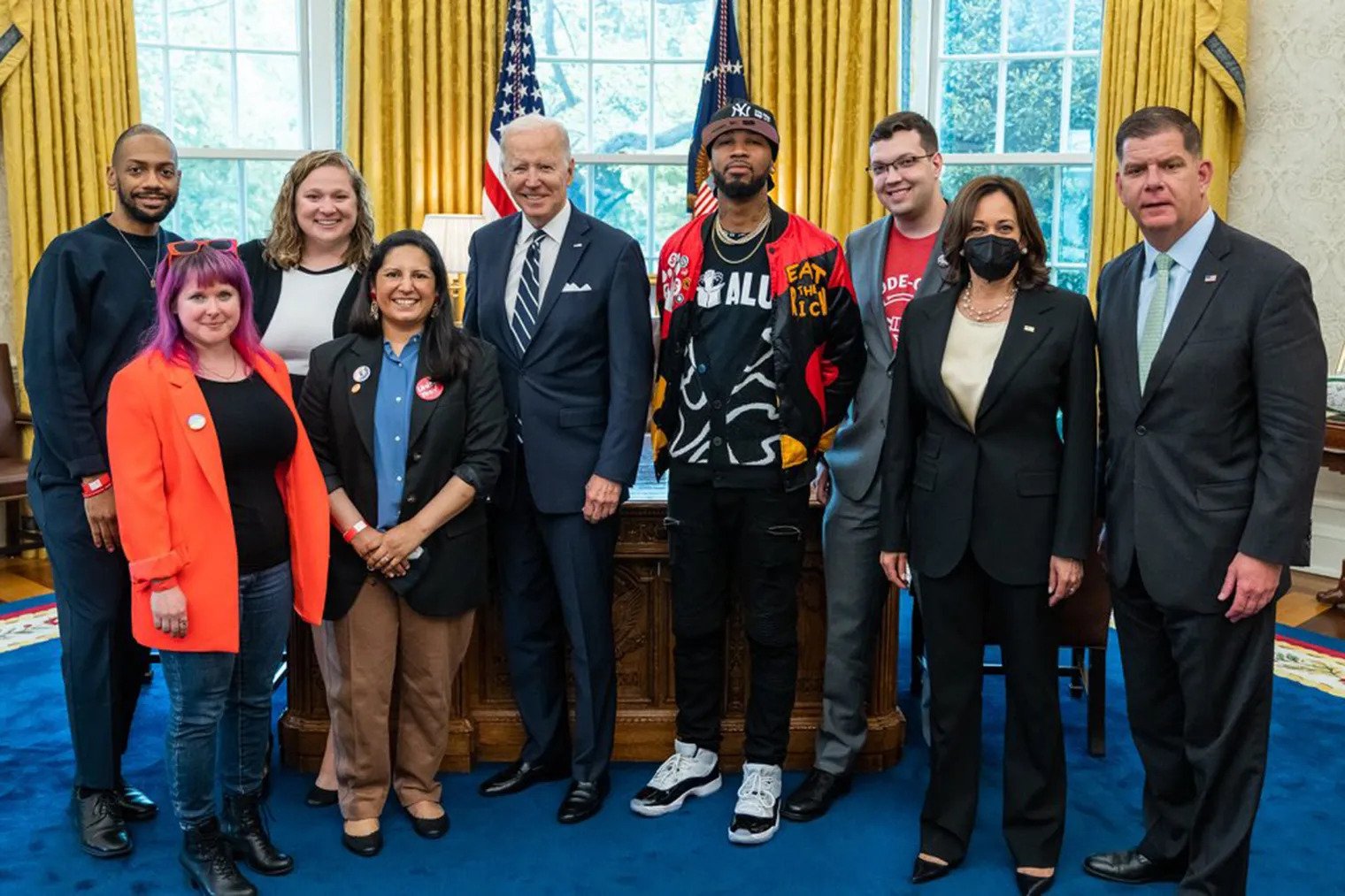 United Paizo Workers along with other labor organizations visited the White House for a meeting with US President Joe Biden, Vice President Kamala Harris, and Secretary of Labor Marty Walsh. Union representative Alex Speidel joined other labor organizers including representatives from Titmouse Productions (the animation studio that worked on Critical Role: Legend of Vox Machina), Starbucks Workers United, REI Union Soho, and the Amazon Labor Union. The meeting discussed organization efforts and UPW discussed the actions of solidarity from Paizo freelancers that were valuable in getting the union recognized. Speidel also confirmed that the following words have now been said in the Oval Office: Paizo, Pathfinder, Starfinder, and Dice. While the goblin and skittermander plushies were on the grounds of the White House, they were unfortunately forced to wait outside of the Oval Office.

Pretty easy to differentiate the politicians from the gamers