It's D&D 5E ONE PAGE ADVENTURE TIME! This was a difficult one to cram onto one page! I wasn't sure I'd manage it, but I got there eventually. You'll need a deck of cards for this one. This One Page Adventure can be easily included into any city where there are thieves—in particular the trio of Gribbles, Big Sam, and Escraz. These burglars have trespassed onto the manor originally built by a powerful archmage and stolen a potent artifact, a deck of enchanted cards that have quickly turned the entire heist into a debacle that's garnered the entire settlement's attention. Several of the watch have already been injured trying to bring these brigands to justice and the PCs are called in to handle the situation, but can they?

This One Page Adventure for 4-5 PCs of 6th level (and its randomized elements) is based on an EN5ider adventure by Tyler Omichinski.

Become a patron of Morrus today: Get access to exclusive content and experiences on the world’s largest membership platform for artists and creators. 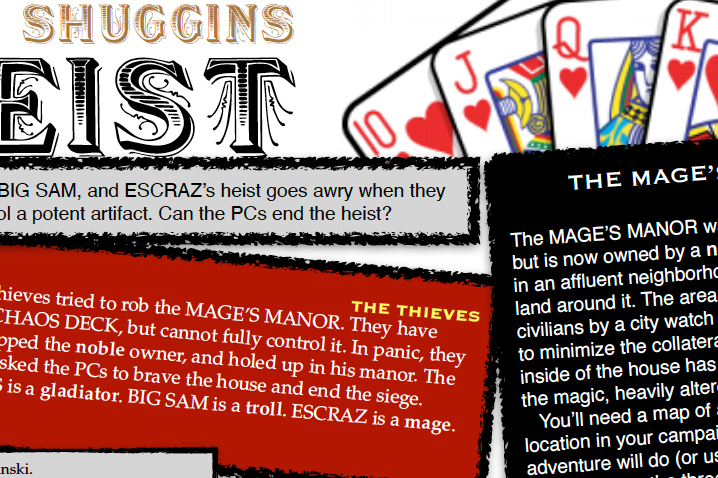 Find it on my Patreon, along with my other 16 ONE PAGE ADVENTURES!

D&D 5E One Page Adventure: Flight of the Almost Dragons

D&D 5E One Page Adventure: You Kill Me!