D&D 5E One Page Adventure: You Kill Me!

It's that time again! Another ONE PAGE ADVENTURE! This one is entitled YOU KILL ME!, and has the PCs haunted by the vengeful spirits of a goblin tribe they once defeated. Can they figure out why, and how to stop the hauntings? This adventure is designed to run at the same time as any other adventures you are running, and is based on an adventure by John Karatovic. Find it over on my Patreon! 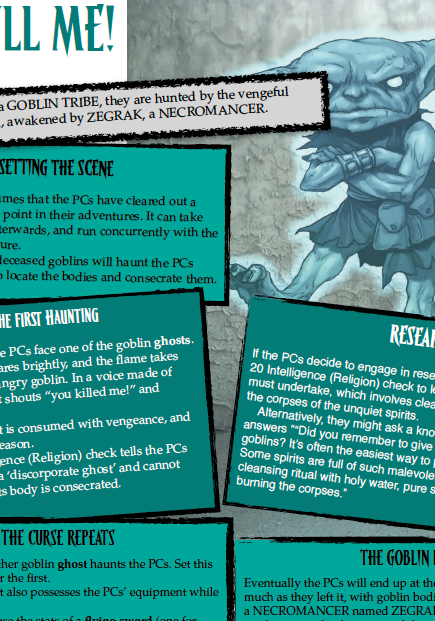 ​
This is my 14th ONE PAGE ADVENTURE (well, 14th if you count Presents for Goblins, the free bonus one last Christmas). Others have included:

Morrus is the owner of EN World and EN Publishing, creator of the ENnies, creator of the What's OLD is NEW (WOIN), Simply6, and Awfully Cheerful Engine game systems, and co-host of the weekly Morrus' Unofficial Tabletop RPG Talk podcast. He has been a game publisher and RPG community administrator for over 20 years, and has been reporting on D&D news for two decades. He also is on a Twitter.
Share:
Facebook Twitter Reddit Pinterest Tumblr WhatsApp Email Share Link
Forum list Post thread…