Opportunity KNOCK!s with a New Kickstarter

Last month, game designers Olivier Revenu and Eric Neudan unveiled their newest collaboration in a Kickstarter campaign: the first issue of an Old School Renaissance-focused gaming magazine they edited. It’s called KNOCK! and described as 212 pages of bric-a-brac, a great noun to summarize both the colorful contents and variety inside this inaugural issue: flip to any page and you might find essays about game design, sewer map generators, 300 pieces of useless magic loot, historical and mythical analyses, new monsters, and retro art, all of which glows with a neon color scheme more familiar to Jelly Bellys than rulebooks. There’s 29 different authors, 13 artists, and too much to discuss about in one interview, but the magazine editors were kind enough to sit down with EN World and discuss what it was like to design and release a gaming magazine now, how the OSR community has responded, and why they’re so drawn to random tables. 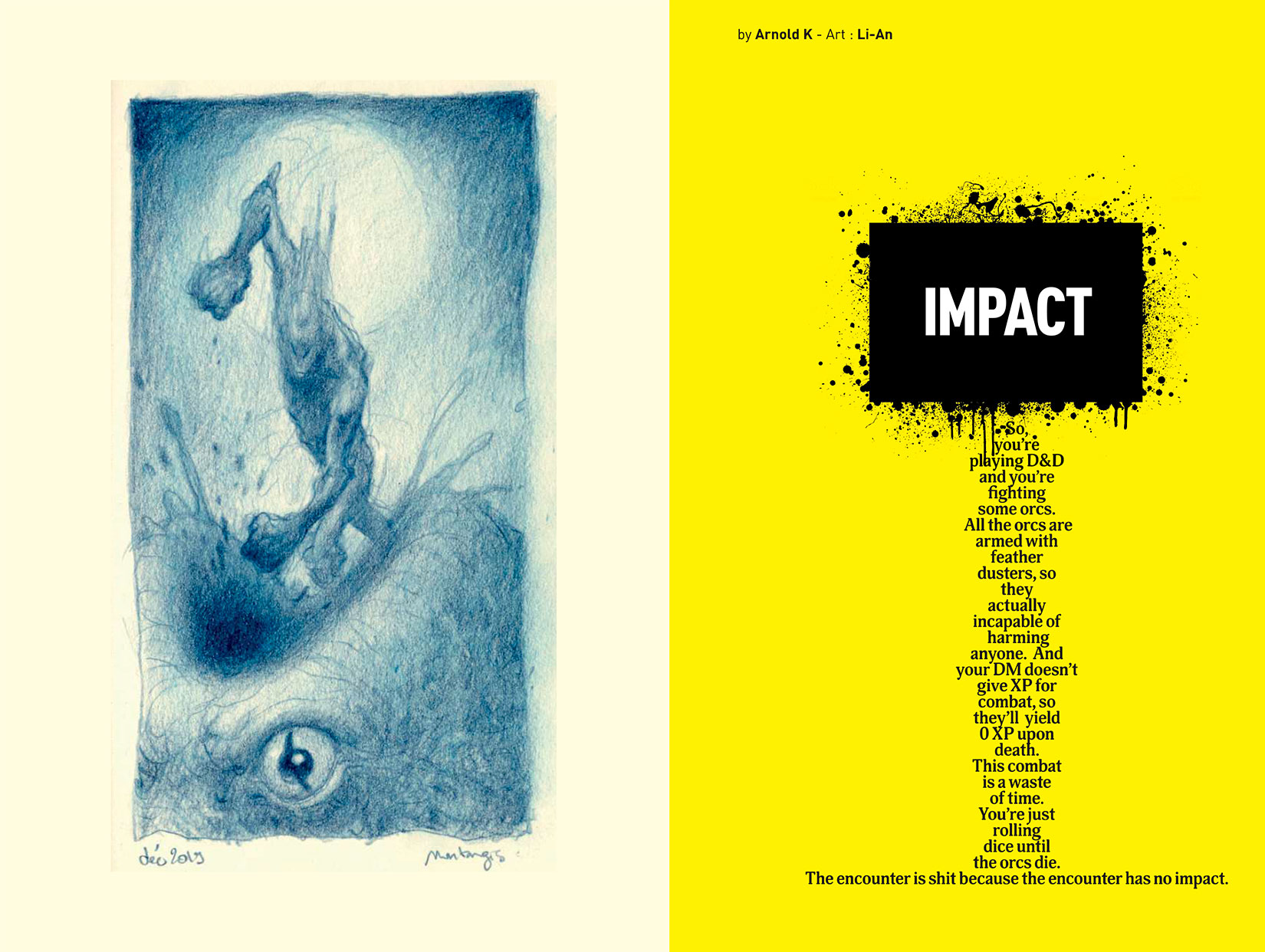 PEARSE ANDERSON (PA): Your Kickstarter discusses that it took two years to go from the initial email about this magazine to Kickstarting the first issue. Could you talk more about this long development process and how it feels to now show off your first magazine issue?
OLIVIER REVENU (OR): I have trouble being interested in different things at the same time. I’m always in an ON/OFF mode. So, the work process can be chaotic, even more so if I don’t have a deadline (and we didn’t set one). I could forget all about KNOCK! for weeks on end and, one day, I don’t know exactly why, I would jump onto my laptop and work like a madman for several days (meaning reading blogs looking for art, making layout, deleting layout, redoing layout, calling the printer, sending the result to Eric…).
ERIC NEUDAN (EN): And then it was my turn to do some work, which I didn’t send over, so Olivier went back to his many other interests. My plan is to decrypt his patterns so we can make an issue in six months instead of two years!

PA: Is now a good time for other game essayists and designers to start a magazine, like yourselves? Do you see there being a potential for more publications themed around OSR play?
EN: 2020 was a good year for exactly zero things. But apart from that, why not? This campaign shows that the niche for adventure gaming publications is still expanding.
OR: It’s always a good time. There’s always been a production of gaming zines of all sizes, old or new, ephemeral or not. That’s one of the features of the OSR movement: DIY, be creative, be productive, and share your work.

PA: This magazine is a mix of dozens of different art styles, fonts, layouts, aesthetics, and content. It feels like a chocolate box, where each section there’s a different flavor. Firstly, how hard was the graphic design for a project like this? Secondly, why did you go with this approach to design instead of a unified vision throughout the magazine?
EN: I think it’s maybe reflective of what is the general creativity of the OSR movement. Just look at the myriads of blogs. They all go in different directions, full throttle, bouncing off each other like demented meteorites.
OR: My day job is making layouts for magazines and books. I first started with something more traditional but it looked too much like work and the result didn’t say what it had to. The funny thing is that I decided to work on a single, 212-page file (instead of having several files as we usually do). It let me go back and forth and change things easily, every new page influencing the others. It was always moving. But in the end, if you look close enough, there’s still a common approach for the whole thing.

PA: Do you believe that tabletop literature such as KNOCK! counts as an artbook?
ON: No! KNOCK! Is just a huge zine. You should be able to write on it, colour in the art, tear off the pages you don’t like, throw it to your players over the screen . . . I hope you do.
EN: I agree. I’d like to make more products you want to mess with. One of my ambitions is to write a campaign workbook, a bit like Yoon-Suin but with a lot of white space to fill in the blanks and draw maps. 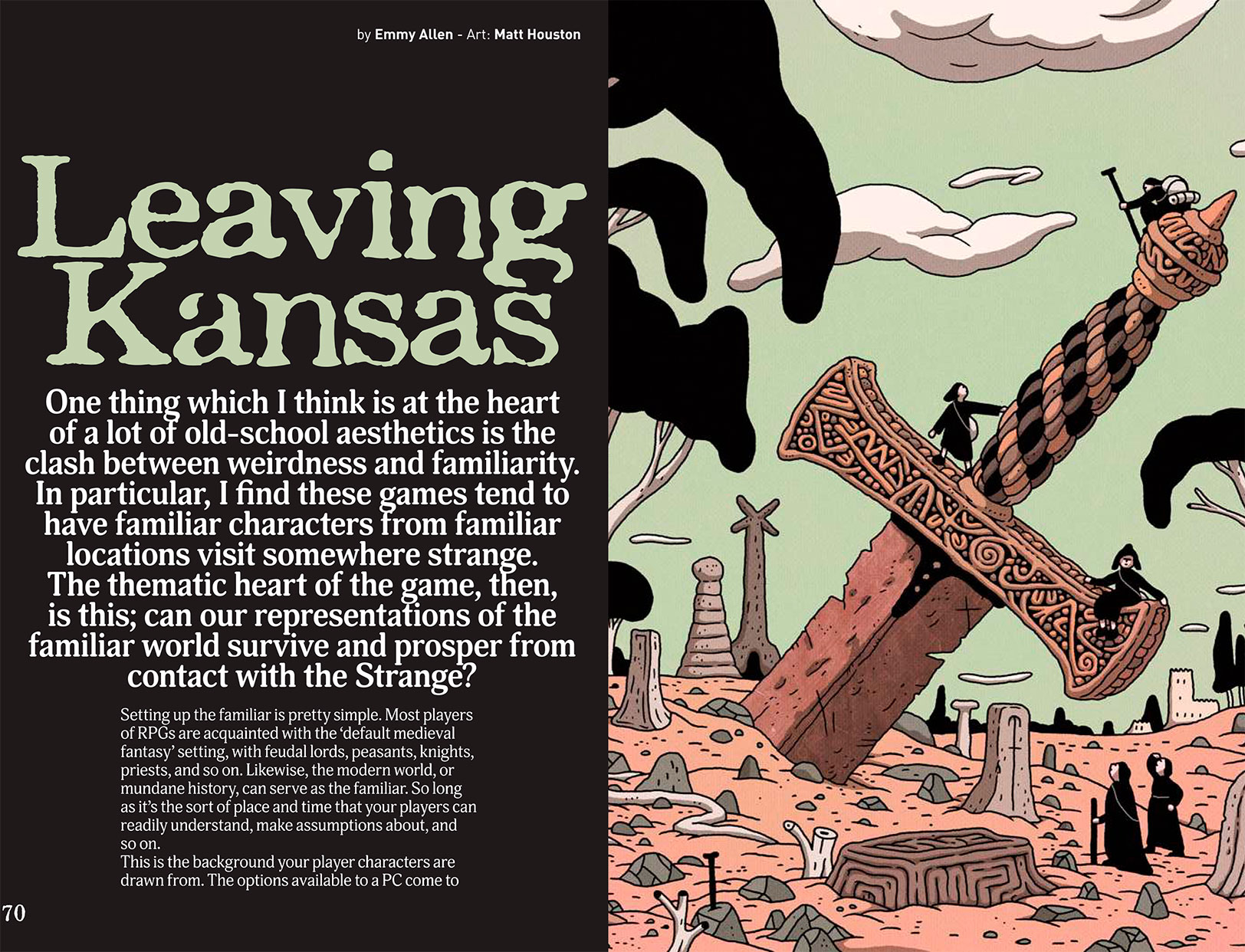 PA: The OSR community is famous for its blogosphere. How did it feel to bring some of those designers and the energy in their community into a magazine? Have you gotten positive feedback from those in the OSR world during your Kickstarter run?
OR: What brought me back to RPGs after a long hiatus is the creativity of the OSR blogosphere. I’m just super happy to have some of its actors in the zine. Actually, that was the main motivation at the beginning.
EN: To be perfectly honest, I wasn’t sure that publishing recycled material would be a winning concept. The success of this campaign proves me wrong. There are just too many great ideas on these blogs (and I don’t know all of them!) for us to remember to use in our games. It feels really good to highlight a small part of this trove, and I hope the articles we publish spark a second wave of blog posts!

PA: This magazine is full of random tables—even the first cover page has a tiny random table of pamphlets adventurers can find in a dungeon. Why are random tables so popular?
EN: Putting on my designer glasses, and speaking in a professorial voice: RANDOM TABLES ARE THE S#!T, DUDE! A good random table is content that you don’t have to read in advance, and that materialises the setting as you are playing. They make the session more fun for the GM because they don’t know what is going to happen. And yeah, they are super fun to write.

PA: Finally, is there a favorite or often overlooked detail in this issue of KNOCK! that you want to draw our attention to in this massive issue? I’m a big fan of the page that just recommends adding bears into every area of the map a GM hasn’t thought about.
EN: Hard to say. But to echo my answer to the artbook question, I’d nominate the ‘Complete the . . .’ spreads. I like to think that every copy we send will be a unique object because of these.
OR: For my part, I’m delighted to have Li-An’s art. His Planète Lointaine graphic novel is just great, he also adapted Vance’s Tschai in graphic novel. I love all his work.

Back in the day, I hated random tables. At the time, for me, it seemed their only function was as themed "ticking timebomb," to either motivate players to keep hustling through a dungeon or feed the XP grind - or both.

It didn't even occur to me that I could pick off the list instead of rolling.

The OSR's approach to random tables is different. Now it seems tables are lists of inspiration for adding the unexpected to your game, even to the point that some DMs use the table to be as entertained as the players with results and the unintended outcomes.

D&D 5E No More Dragon Magazine: The Next Best Thing!
2