D&D 5E Paladin, How Are You Righteous?

Your paladin is a knight renowned for courage, honor, courtesy, justice, and a readiness to help the weak. You do what is right no matter the cost. But why? And how do you show your righteousness? 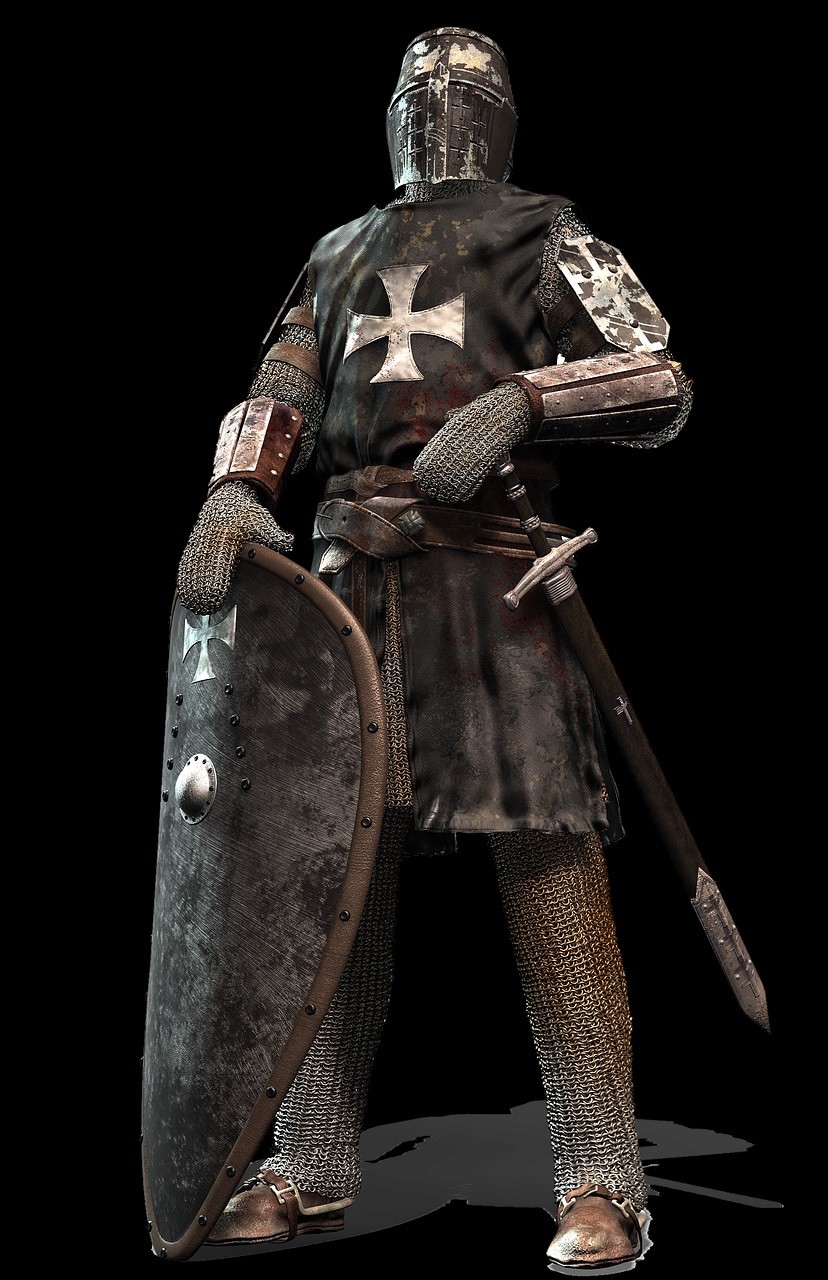 Picture courtesy of Pixabay.​
Why would a person put a moral code ahead of their own safety and comfort? You don’t have to be a paladin to do so. Here are some ideas to consider. Keep in mind a paladin is unlikely to feel they measure up to their own standards and constantly strive to improve.
How does your paladin show her righteousness? This line must be carefully walked so as to not stray into self-righteousness (being right because you say you are). As a paladin, perhaps the best way to display righteousness is through action and not through talking.
Being a paladin is not easy, especially if your best friends like to kill and loot. You may find it works best to act on your beliefs more, talk less, and really listen to where those who oppose you are coming from. Only when innocent life and freedom is threatened do you take up the sword for your cause and in the name of your higher power and bring the fight to the enemy.

Charles Dunwoody started playing and running RPGs with Advanced Dungeons & Dragons (before it was first edition) and is currently GMing Forbidden Lands. He wrote a few articles for Dragon Magazine when it was in print, wrote a bit more for Mongoose’s electronic Signs & Portents, and was paid for a supplement for Bulldogs! (d20 version) that was sadly never published. Currently, he freelance writes including articles for EN World and Geek Native. He also camps year round, backpacks, and canoes when not reading and writing. Charles is a participant in the OneBookShelf Affiliate Program, an affiliate advertising program designed to provide a means for sites to earn advertising fees by advertising and linking to DriveThruRPG.
P

WayneLigon said:
The biggest mistake people make in D&D is thinking that 'Lawful' means 'the laws men create'. It means the more abstract concept of 'order'.

If one is thinking about this in serious terms, there is some complexity in the sorts of situation that you describe.

The most famous real-world contemporary scholarly exponent of natural law, John Finnis, argues that there is a duty to obey the law which is independent of the law's content, because by disobeying the law one reduces its authority and therefore increases the risk in the breakdown of order - which would (according to him) be a bad thing.

In contemporary writing on these matters slavery laws and National Socialist Germany provide the standard bogeyman cases, and various authors have different ways of dealing with them. But I think the idea that the paladin would simply free the slaves is not self-evident - for instance, I just rewatched Iron Monkey recently and although Iron Monkey robs from the rich to give to the poor, he only robs from public officials and so is taking money that (arguably is not really theirs, because embezzled pubic funds. Whereas in the flashback in which he recruits his assistant Ms Orchid from the brothel where she works, he pays the brothel owner the money necessary to redeem her from her indenture.

The idea that a LG paladin would try to redeem slaves rather than simply overturn the property system isn't absurd to me. Of course the idea that a LG paladin might try and overthrow the whole system - perhaps agreeing with John Rawls that a system of social "order" that depends on slavery isn't genuinely a system of order at all because not stable for the right reasons - is also plausible.

The D&D alignment system leaves these issues open for the individual player (or at more GM-directed tables, the individual GM) to decide. Conversely, if one wants to play D&D with more of a "4 colour" morality - which is an approach I tend to take in my own D&D games, leaving moral complexity for other systems - then I think it is better not to throw up examples that are overly tricky. So eg in my 4e D&D campaign the slavers were kidnappers - and so straightforwardly lawbreakers as well as immoral - and hence there is no need for the paladins to worry about the consequences of acting contrary to the underpinnings of the existing social order.

I think that another important aspect of making paladins work well in D&D-type fantasy is leaving room for providential morality of the sort found in JRRT. If one reads LotR with a critical sociological/political eye it's of course absurd that restoring the rightful king is the most morally or socially important thing to be done - as opposed to, say, raising the living standards of the peasant of Rohan, scrutinising the class structure of the Shire, etc. But to read it in such a way is to reject its internal aesthetic. WIthin that aesthetic, the world is subject to providential direction, and the restoration of the rightful king is both a cause and a sign of providential bounty coming to the land. Classic D&D paladins work best in my view, under a similar aesthetic.

Which also ovleraps nicely with a 4-colour approach - we don't need to worry why Storm spends her time fighting Arcade and Magneto rather than relieving droughts and famine, because in the fiction defeating those supervillains is the way to redeem the world and bring good to it. (And notice that once you drop this aesthetic you move from 4 colour morality to something like the Watchmen. In that world there's no room for superheroes or paladins in the classic mould - as Adrian Veidt notes, they're self-indulgent and self-deluded.)

A class similar to Paladin in another RP system I play, is not allowed to withdraw, no matter the odds.

I wonder if somebody plays it the way in D&D?
It feels right to me for LG or LN alignments, maybe even also for NG and LE. There should be some rules like that, call it code of conduct / honor, measure etc. but there should be some ethos involved with the paladin class.

And by that I do not mean a code of conduct which sole purpose is to kill mobs and take their stuff because it is the oath of the bloodspiller with CE alignment. That would be to easy, unless said antipaladin would be required to run rampant and not stop it in the mainly Lawfull good aligned and well guarded city where the party decides to fill up their provisions.

The level 6 Warforged Paladin in one of my two Eberron campaigns equated righteousness with Cyran cultural and societal norms.

He displayed his righteousness for all to see when he killed a challenge 15 rakshasa (Mordakhesh himself) in a single round (183 damage to a creature with 170 hp), saving the life of a Siberys dragonmarked heir of House Vadalis that the fiend needed as a sacrifice.

WayneLigon said:
The biggest mistake people make in D&D is thinking that 'Lawful' means 'the laws men create'. It means the more abstract concept of 'order'.

The silly 'gotcha' of 'haha, paladin,you're in a society where slavery is legal! You have to own slaves! And rape them, too, because that is legal as well!' is just face-palming. Any GM that uses it isn't presenting a 'moral dilemma', they're spitting on the concept of someone who wants to actually do good.

This is the kind of moral absolutism I hate - one that is willing to condemn the entire population of a nation (e.g. Rome) as irredeemably evil for accepting something as the norm that we have now redefined as wrong.

I wonder if future generations will condemn us as irredeemably evil for eating meat and burning fossil fuels, or will humanity have grown beyond that kind of immaturity?

Paul Farquhar said:
This is the kind of moral absolutism I hate - one that is willing to condemn the entire population of a nation (e.g. Rome) as irredeemably evil for accepting something as the norm that we have now redefined as wrong.
Click to expand...

I don’t blame Roman slaves, but from an idealistic standpoint, I have absolutely no problem condemning the elites, with the empathy to realize, that people believe the ideas that surround them.....e.g. Martin Heidegger...word and deed.

The sun does not revolve around the earth.
The London Underground is not a political movement.
I’ve checked these things, they are wrong. Not redefined as wrong....just wrong.

lowkey13 said:
I mean, say what you like about the tenets of the lawful stupid Paladin, Dude, at least it's an ethos.
Click to expand...

It also is a hell of a lot more entertaining, than milquetoast Paladin play from Oath of the Ancients, which often comes across as the ethos of a commercial Zumba or Hot Yoga class.

Paul Farquhar said:
This is the kind of moral absolutism I hate - one that is willing to condemn the entire population of a nation (e.g. Rome) as irredeemably evil for accepting something as the norm that we have now redefined as wrong.
Click to expand...

I would think that the evil is irredeemable only because it took place so long ago, and in such different circumstances, that there is no one left to hold to account, no one to atone, and no meaningful way in which reparation might be made.

But to say that classical slavery was an evil isn't to posit anything about whether or not those who participated in and perpetrated it were themselves capable of redemption, or not.

I would also say that to suggest that moral judgements about slavery are a matter of definition is a big thing. Many people, me included, would be more inclined to say that the whole point of moral and political improvement is that the definitions stay constant but reappraisal of various states of affairs by reference to them takes place.

My own favourite book on classical slavery is MI Finley's Ancient Slavery and Modern Ideology. One of the interesting methodological aspects of the book is that Finley is unflinching in his readiness to address classical slavery as a social evil, but his actual analysis is unsentimental and relatively rigorous social history; whereas the authors whom he is criticising adopt (at least as he sees it) a sentimental and moralised method of analysis which ends up being an apology for the institution of slavery. I would hope that future historians are able to write without sentiment and apology about the world that you and I are part of.

And putting to one side any sort of sophisticated analysis, and bringing this back to more of a D&D lens: when I watch Spartacus I know who I'm barracking for.

billd91 said:
This is where the article becomes problematic. There's a lot of absolute terminology here. Never backing down from evil is where Lawful Good turns into Lawful Stupid and people start to find that perfect is the enemy of good. Nobody can fight every evil all the time. Sometimes you've got to fight this evil over here, even if there's evil going on over there. You've got to prioritize your fights. Doing so does not make the paladin less righteous.
Click to expand...

I'm reminded of the final episode in season 1 of Peaky Blinders where gang is set to face Kimber's men face-to-face in the open street (no cover, nothing) even though they are outnumbered almost 3-to-1. That is how they did that back then, never backing down.

Some would call that display of bravado Lawful Stupid...but is it really?
Last edited: Jan 14, 2020