Getting a new monster book is one of my favorite experiences in RPGs, especially when most of the monsters are new to me. The Soulbound Bestiary (PDF only) has the right balance of having monsters that PCs can always fight (Chaos daemons) whose power rises as darkness falls across the realms and a collection of everyone and everything else that have to be dealt with on a case by case basis. This is the best kind of monster book. My thanks to Cubicle 7 for sending me a copy to review. 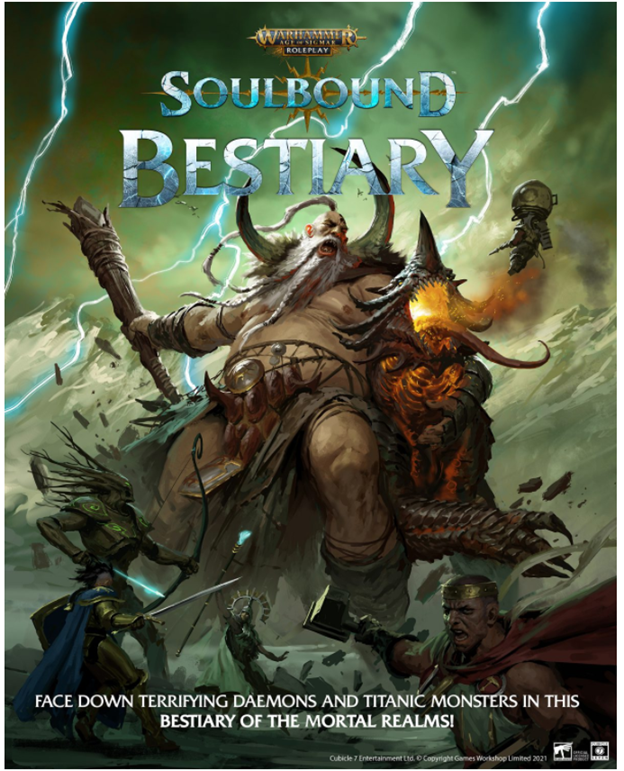 Soulbound (Soulbound Starter Set Unboxing and Overview) is a fantasy RPG set in a world after Chaos won and well covered in Warhammer Age of Sigmar the miniatures game by Games Workshop. The Bestiary is a huge expansion for the RPG, adding from all the factions loyal to the gods as well as the various followers of the Chaos gods. It not only adds to the monsters in the core rulebook but also covers additional details and rules for a GM to use as Doom increases. Each creature gets not only stats but also a comprehensive description of the monster’s place in the realms.

In Soulbound, factions include not just Duardin (dwarves), Aelf (elves), and Mortals (humans) but also Orks and even undead. While these various people often come into conflict with each other they are also capable of working together when needed and none want to see the world overthrown by Chaos. Followers of the Chaos gods therefore are always a threat to all the other species of the various realms. The PCs, called Soulbound, never need to hold back when fighting Chaos.

The growing influence of Chaos in the world is tracked with Doom. Doom starts at 1 and grows as rumors of danger become actual threats, when heroes die, and when heroes flee from danger. As Doom increases, the GM describes the world as darker and the people more downtrodden. Rules wise, monsters and battlefield dangers increase.

The Bestiary has simple rules for putting together challenging encounters depending on the XP of the party. Monsters can be minions which can be combined into swarms, warriors, champions, and chosen. A combat for a starting party will have a swarm or two of minions and one or two warriors and maybe a champion. Or it might have waves of monster showing up round after round. Minions are great for Soulbound who can make area attacks (and in Soulbound area attacks are not restricted only to spell casters due to Duardin inventions) while Champions and Chosen are great for melee Soulbound to face.

The Bestiary also has 36 complications that can be added to an encounter. Encounters in Soulbound are usually not just creatures to deal with but also battlefield dangers like fire or fog or crowds of innocent mortals. 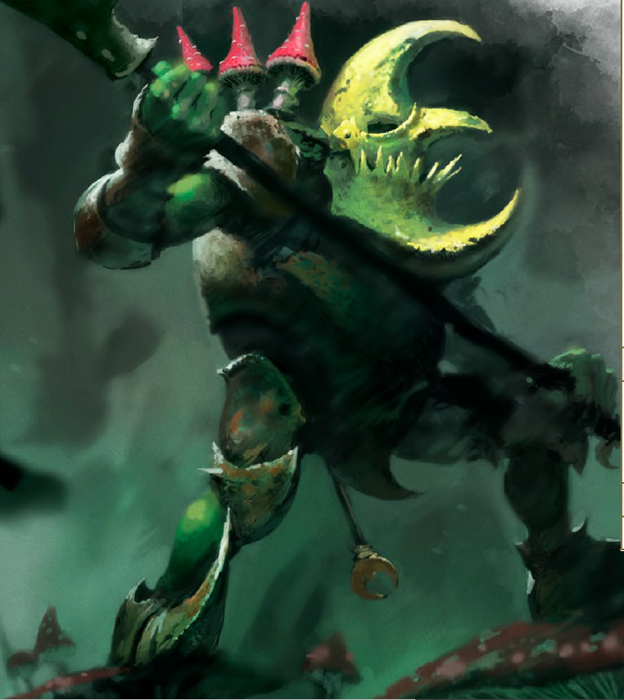 The creatures are divided into sections like monsters and beasts and Skaven. Each section has a half dozen or more entries. There are NPCs as well as creatures and monsters. Because the forces of Order can fall to Chaos, the party may end up fighting their own people on occasion as well.

The great thing about these creatures is the unique abilities of each. Few of these entries are as simple as a melee attack and armor.

The Stormvermin are elite fighting Skaven. While Warriors, they are trained to fight in formation. When doing so, their Defense increases and creatures have to pass a Test to leave their Zone. If a Skaven Arch-Warlock stands two Zones away from the party, the Stormvermin could form a barrier so the Arch-Warlock can rain down spells on the party. The Arch-Warlock can push for more power and the power granted increases with higher Doom. Combos like this are easy to understand from the clear descriptions, helping GMs make conflicts rich and exciting when words fail.

The Gloomspite Gitz are fungoid Grots, spider worshipers, and bellowing giant Troggoths. Squigs are balls with legs and teeth that bounce around battlefields knocking down foes. Grots sometimes ride them. The Loonboss is a Grot that can grow in melee power and stealth by eating a mushroom plucked from their own body. They can also order allies to make an immediate Attack. Some Loonbosses are mounted on giant cave Squigs. A mounted Loonboss can make other Squigs more dangerous in melee combat and the Loonboss also wields a weapon with Reach.

The Stormvermin and Arch-Warlock and the Loonboss are just two examples. And not every foe will require combat. PCs may have to talk their way out of problems or into alliances (maybe short-lived in some cases). Many of the creatures are also spellcasters, several have ranged attacks or area effects, and nearly all have unique abilities. And Doom powers several of them up.


Should You Buy It?​

Soulbound is an RPG that will get better as the GM learns the intricacies of the setting and the creatures of the Realms. The Soulbound Bestiary will be useful to any GM expanding beyond the current in print adventures, serving to inform, inspire, and assist the GM in creating battlefields, whether physical or social. If you GM Soulbound, getting the Soulbound Bestiary will really level up your game.
Click to expand...