Love both.
Just a suggestion regarding Army of the Damned; three days works well for the caster, in most cases, to achieve their awful goals, but it doesn’t always play to characters, in a big world, hearing of the atrocities and travelling to try to stop them.
Maybe an option to imbue control and duration of the army into an item, making it permanent, but also allowing an adventure to steal/destroy the item from the caster?
Thinking Heart of Ahriman v Eye of Nergal type situation...

Definitely possible to keep it going by recasting the ritual and using the same Symbol of Authority. Just cast it, again, at the site of your most recent massacre and hoof it to the next one!

And then the heroes have plenty of time to get to you, 3 days at a time. But every 3 days they spend means another massacre they could've prevented!

Couldn't get any sleep. Wound up reformatting the entire Regions document... and It's gonna be bigger than initially anticipated, too.

There are now 6 Regions with different Cities and Nations in them. Bold are the big cities/city-states.

I could probably put a few different small cities around Myr.. but I was thinking of leaving it very vague so that people can use all those islands for personal campaign ideas.. Ngo is meant to be sort of an "Entrance City" into the jungles beyond that no one really goes past, so it also has no secondary cities, currently. Maybe no one is allowed? Dunno for sure.

Also updated the map. It's 132Mb at full 8k resolution, so I can't embed it on the forums. But I uploaded it and you should be able to pop it in a new window.

Once I get it all done... 98 pages. 92 will be information, and 6 Map-Pages with zooms in on the different regions.

It's all quite daunting... but I'm already over 1/4 done. So feeling optimistic.

I have stated before, but it’s worth stating again; keep that optimism. What you are building here is fantastic. 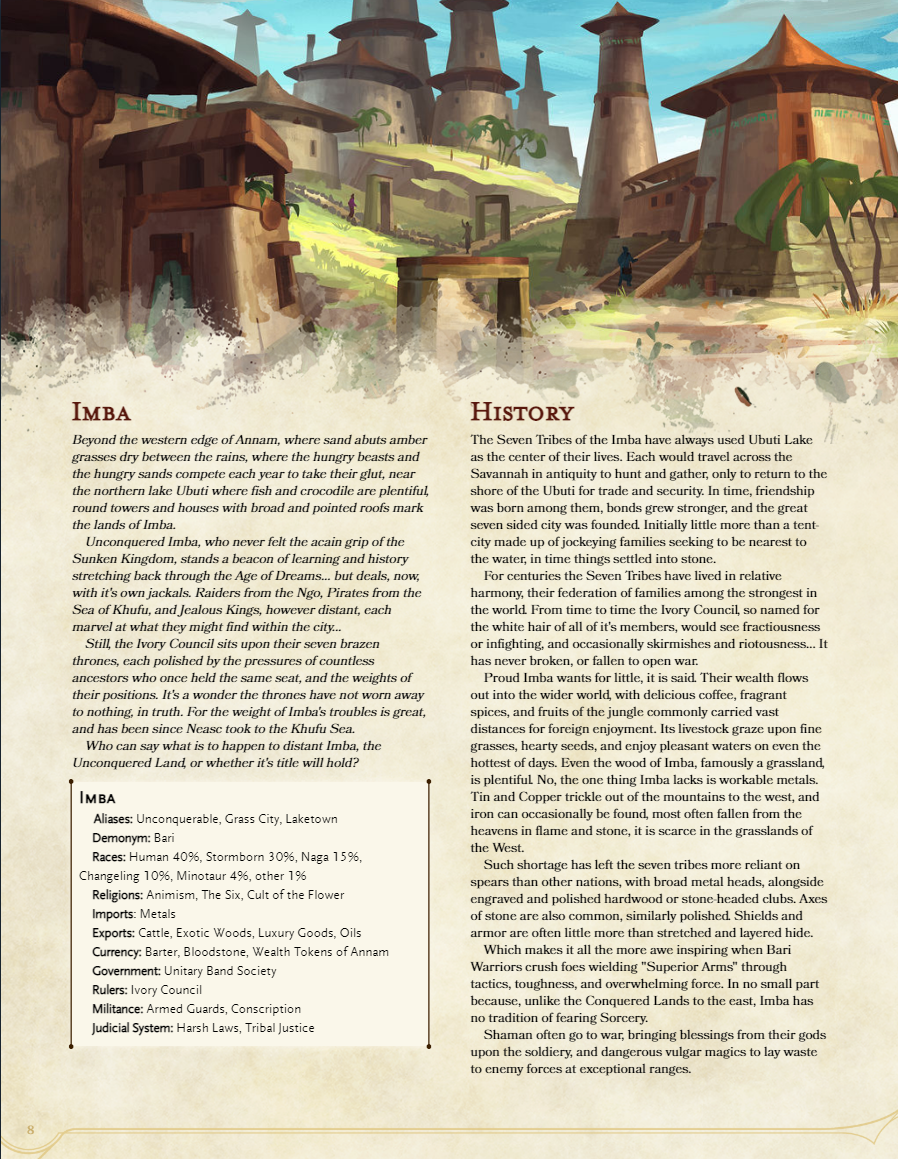 Just gonna skip around a bit and lay out first pages for things so I can get a stronger grasp on how the world fits together before I delve into the organizations and mysteries.. 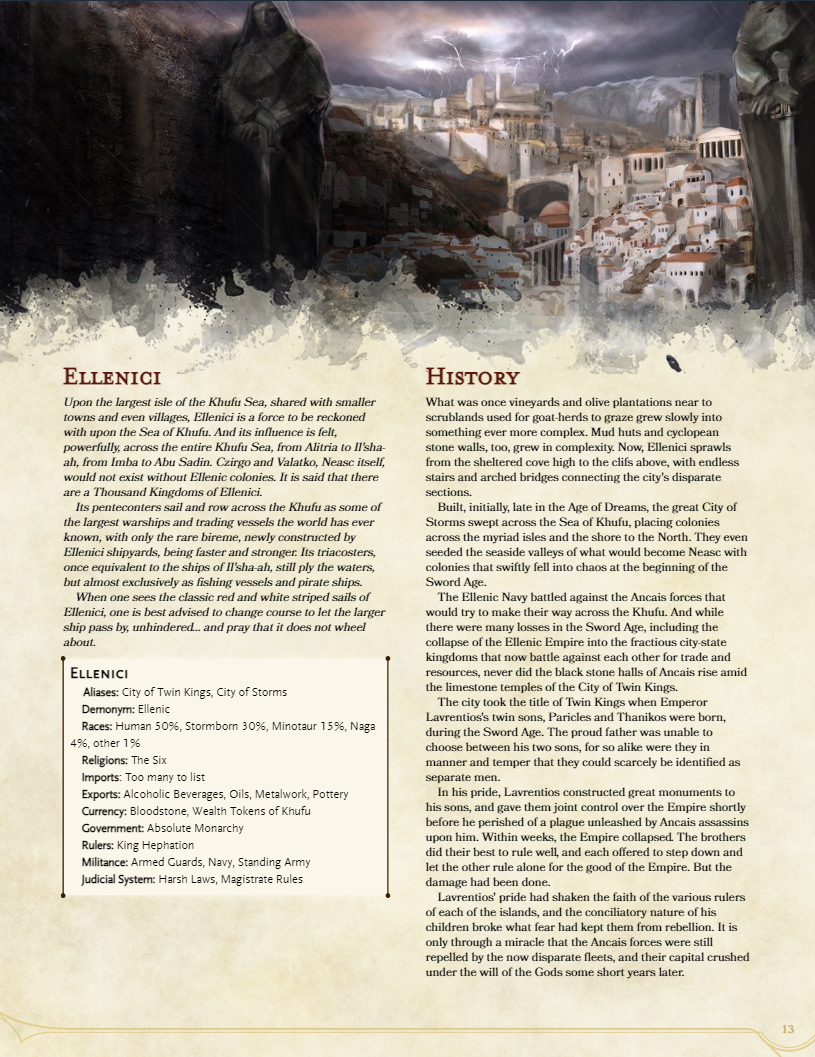 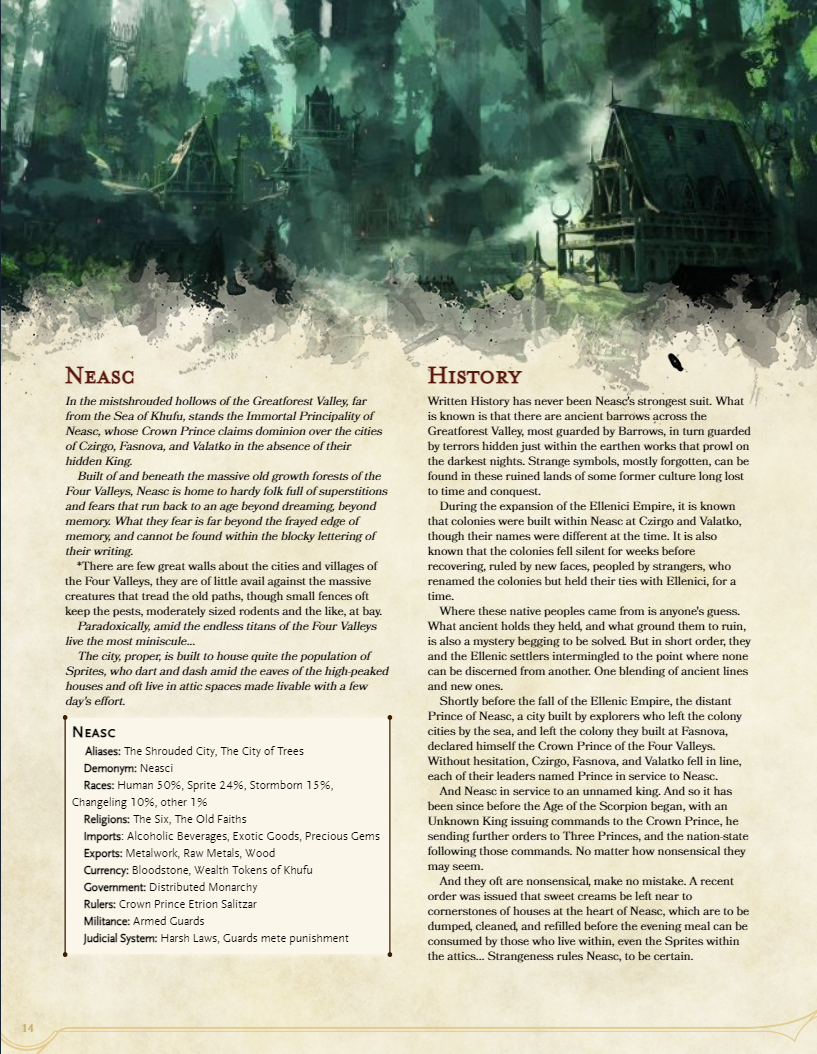 Absolutely love Neasc, and am torn between setting my first campaign (when you publish) there or in Scorpion Lands.....or maybe, thief, reaver, slayer, combine both.
I like the idea of ley lines of power, forgotten stones in shrouded groves and ancient spirits lurking in lost barrows.

Near my home, there are several Neolithic barrows and they are evocative places, especially at dusk, though sadly most of the forests have long gone from England.

The current plan for the Starter Adventure is to set it for 4 level 3-5 characters in Lagan to learn some truths about the Caravan City and its leader.

Just to make something perfectly clear: As much fun as I'm having writing the setting material and prospective races/classes... none of this is -entirely- set in stone until after October when I get my greedy hands on the LevelUp PDFs and Books. 'Cause I'll have to go over it all to make sure it works within the system.

Steampunkette said:
The current plan for the Starter Adventure is to set it for 4 level 3-5 characters in Lagan to learn some truths about the Caravan City and its leader.
Click to expand...

Sounds great to me. One of the joys of S&S, particularly Conan I guess, was the travel to various parts of the world. I suppose you can’t “tread the jewelled thrones of the world beneath your sandalled feet” by staying in your home region! 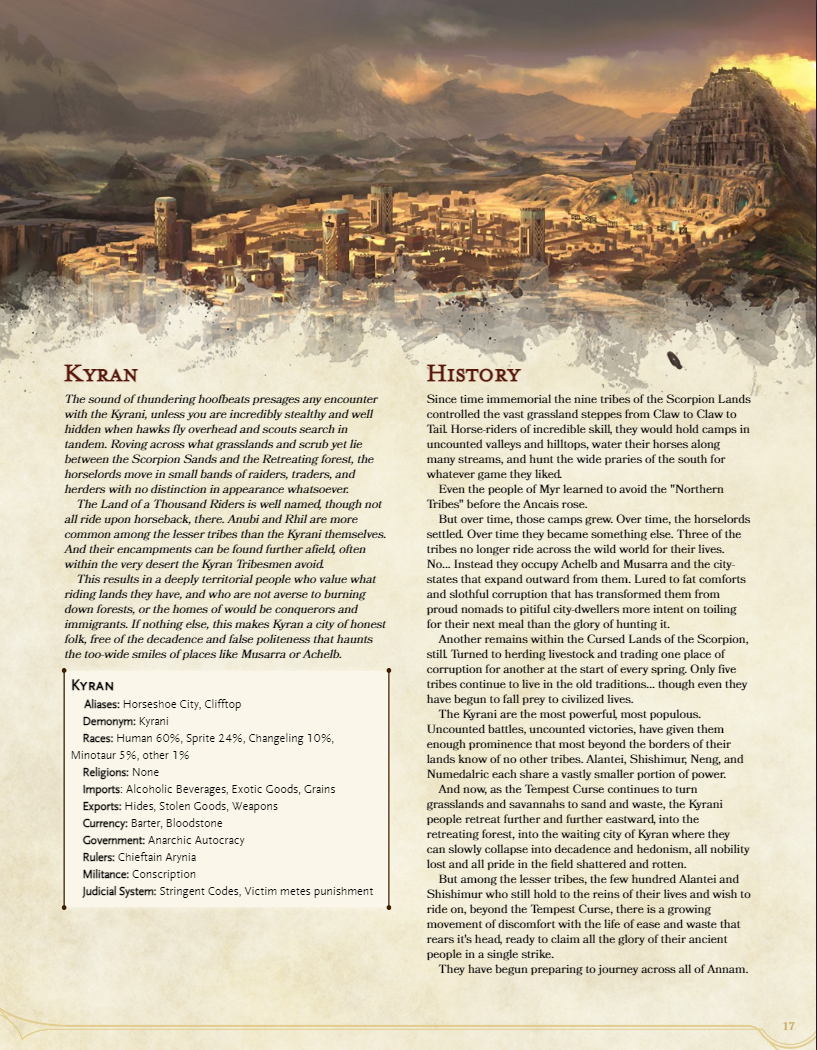 Surely nothing bad will come of this. 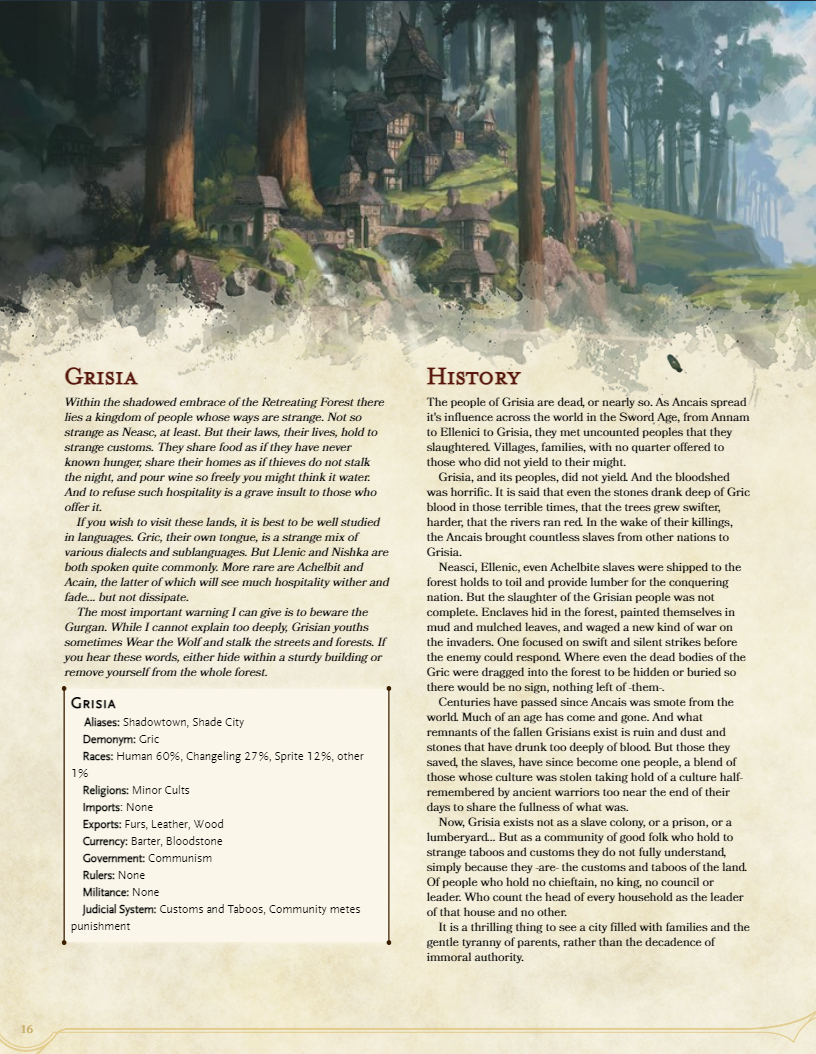 Fun note: It was long theorized that Georgia got it's name from the love the inhabitants had for St. George being made into a name by a French Explorer. Or that it's a corruption of a Greek word meaning "Tiller of Soil". But the current theory is that it has to do with the word "Gurg" or "Gurgan" which means "Wolf".

People of the Wolf is kind of evocative, even if I only threw a single paragraph at it... followed by some heavy-handed allusions across history.

Love this!
The game opportunities for the Gurgan are immense, and the whole society is a wonderful innovation for fantasy....and one that is full of hope.

And now for one you've probably been waiting for... 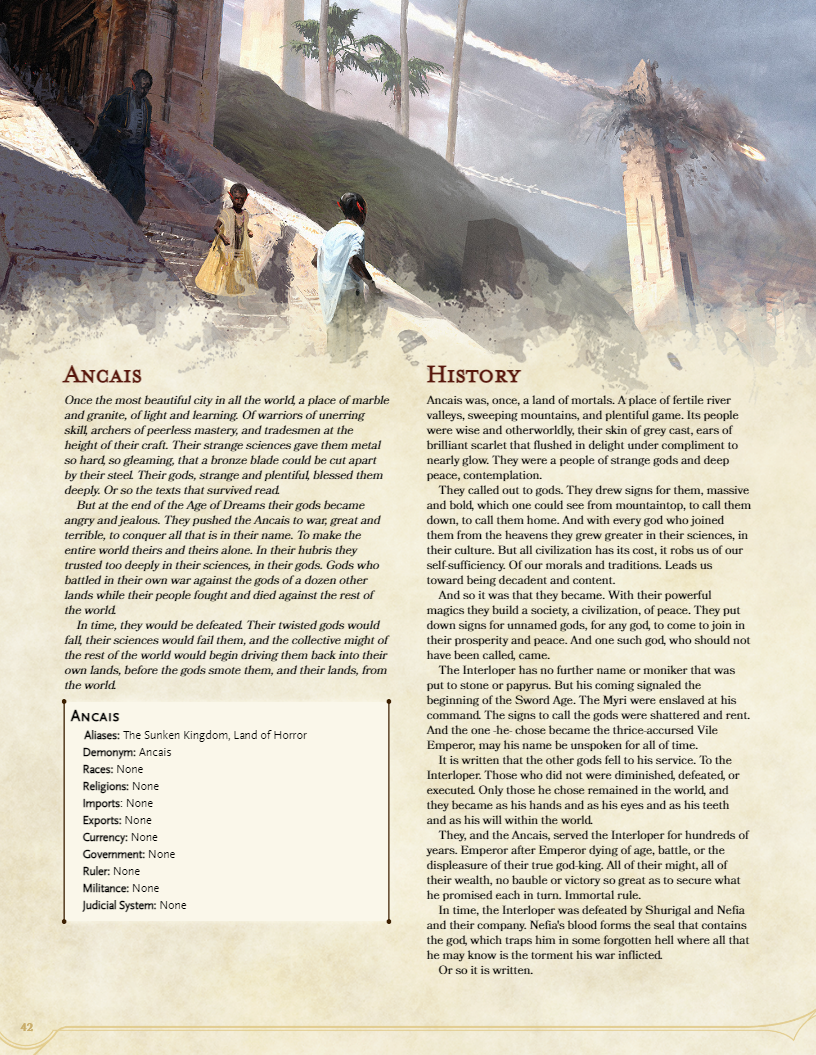 Even the greatest society may fall to their own folly. And, in truth, must for the setting to fit in the Howardian mold.

Decadence and pride, hubris and lack of concern, of care, saw Ancais reduced to nothing. Feels nearly Biblical, if I'm honest... 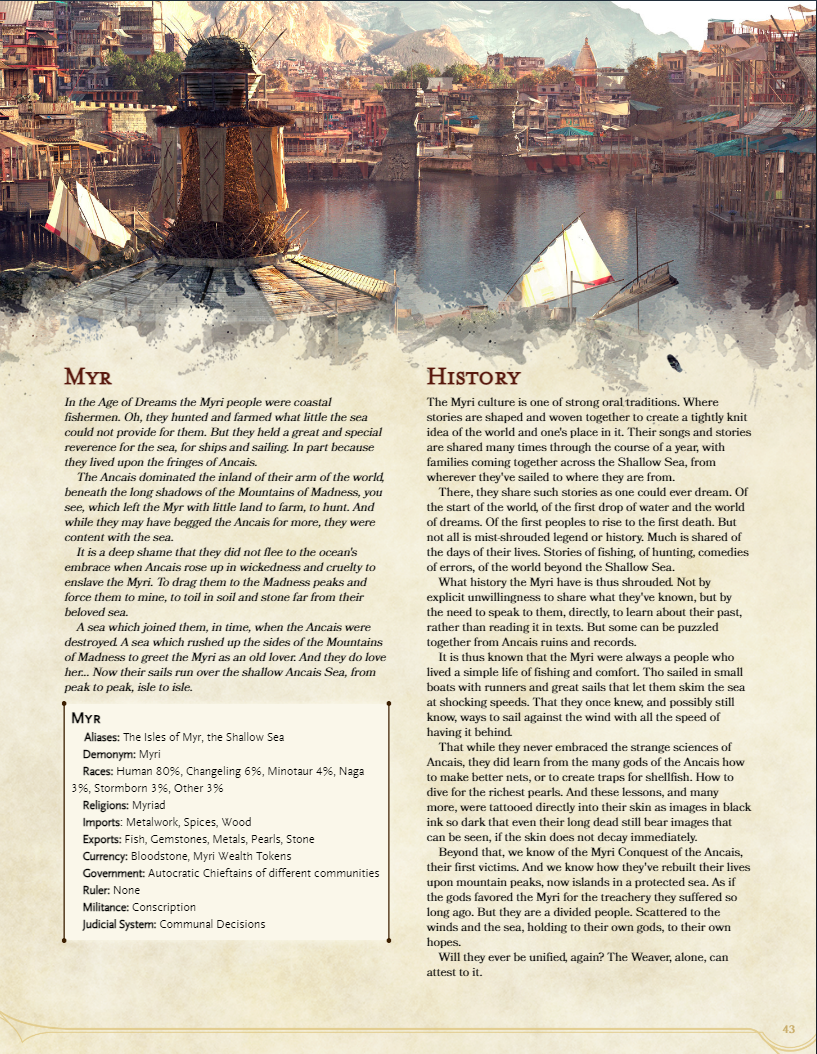 Great stuff as ever. The tattoos on long dead skin make a “different” adventure hook than a normal weathered treasure map!

Based on what I learned from the thread on Evil Deities and Demons in D&D:

D&D's standard demonic hierarchy probably wouldn't work well within the setting. I think it needs to be changed toward Unique Demons and Unique Angels rather than faceless hordes of Lemures and Cherubs. Still have different kinds of demons, though. Because each demonic "Kind" represents a specific form of corruption. Succubi represent sexual depravity, Vrocks as greed, Quasits as pride, Nalfeshnee as gluttony, Mariliths as wrath... you get the idea. Maybe do specific succubi that continually plague a given character/party rather than some random succubus?

Similarly, Demons are, or were, spiritual issues people had based on emotional and psychological issues. A succubus, for example, might represent someone's inability to control their libido, whether through socialization, trauma, or biological quirk. Such a person might be able to defeat their issue in a given situation, but it doesn't become significantly easier for an addict to avoid relapsing into their addiction just because they've avoided it in the past. It's a continual struggle and demons meant to signify that role should probably continue to be a danger for that reason.

Corollary Thought: Might still be good to have Demons as Tempters toward Transgression and Angels as Forceful Redeemers. Where a Demon will try to pull you into transgression through guile and trickery so that it feels like you're the one doing it, while an Angel does not give you a choice in the matter of redemption, you are -forcibly- redeemed regardless of how you feel about it. Would make for an interesting structure of narrative intent wherein goodness requires explicit intention and action while evil is a slow and corruptive slide into depravity with no effort behind it.

Strongly plays into Howardian ethics, too.

Also... I think I'm just gonna copy-paste all the first pages from the different cities (First and Second for the big towns) into the player's guide and do up a second (third for big towns) page for each with a brief overview of how characters can/would exist in that particular city. Like the different setting-specific roles for Fighters and Warlocks in Musarra as opposed to Lagan, as well as the local Culture options and flavors.

So, like, an Ellenici Raider would be more of a Khufu Sea Pirate as compared to a Lagan Raider as more of a Desert Bandit.

As an experiment, I put together a Musarran Player's Supplemental Page. 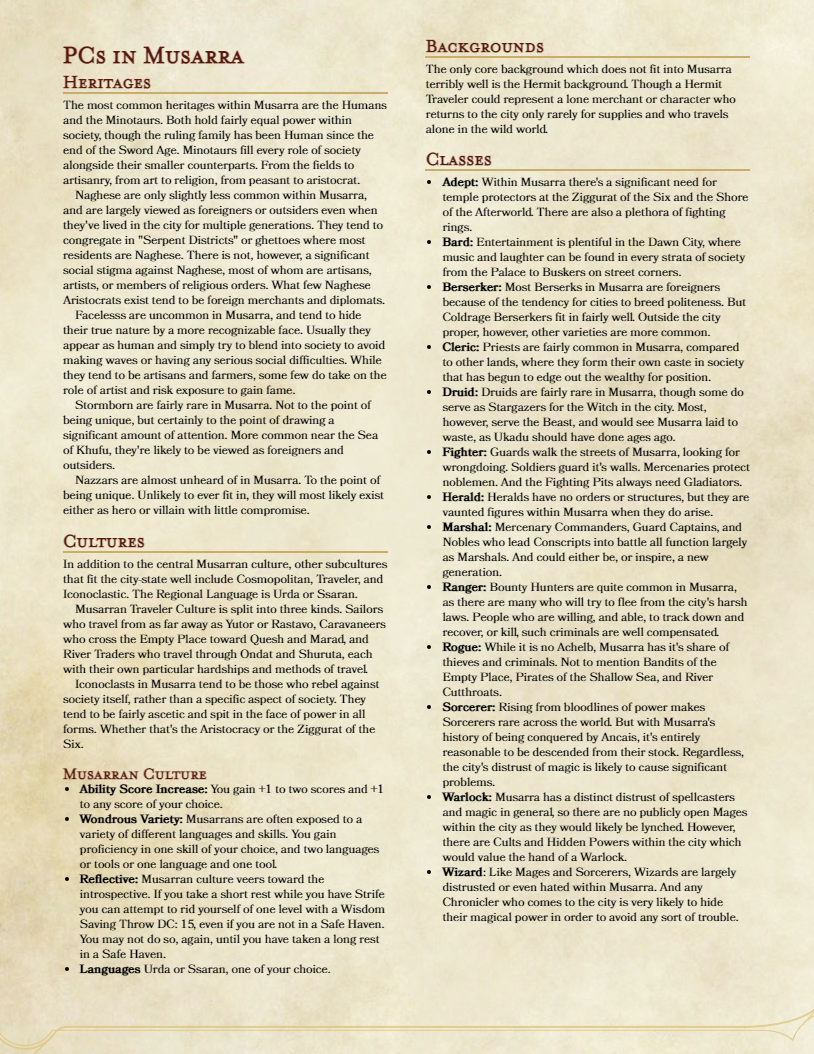 Works really well and also helps conceptualise each region for players, in addition to the regional descriptions. Love it.
Apologies for the delay replying; spent three days in Glastonbury, with a bit of caving. Great for gaming vibes on more than one level!