Level Up (A5E) Sins of the Scorpion Age, Sword and Sorcery Campaign Setting

From the deserts of Annam to the Green Valley of Achelb, from the Sea of Khufu to the distant stony shoals of Ellenici, I have traveled. I have recorded much of my journeys and the tales that have been told along the way. How best can I describe our world, from my experiences in walking across it's length and breadth..? Immense. Immense beyond imagining. A man can walk for seven days and seven more and still not reach the near edge of it. I, myself, have never reached the drop where the world falls away into night sky, though I have heard many tales of this. But our world is largely the same, a far as you might travel.

Stone and sand, earth and grass, water and animals, as you might find in your own homeland. Some are more sandy, others more rocky, others are even green, if such a thing can be imagined, with great forests and fields of grasses filled with horrors and monsters beyond dreaming, beyond counting. The Beast yet holds sway in those places of plenty. And guards them, jealously, for his own purposes. I cannot recommend this life for anyone. Yet I know others will follow my footsteps in time. I leave these chronicles for you.

That you may at least be prepared for what you will find.
-The Chronicler-

My current thoughts on regions and design are based largely in Sword and Sorcery, which is only appropriate for the setting of course... But I feel like I should explain in some small portion -why- I'm choosing this sort of setup. Particularly the focus on Arid lands.

1) Culturally we respond well to deserts in fiction. Thanks to a long history of deserts being considered "Borderlands" of exploration, thanks in part to white-centric media.

2) Historically we imagine deserts when we think of the distant past. Not just because of the American West, but also because we think of Mesopotamia and Ancient Egypt as the heart of the beginning of civilization. These sand-swept locales of ancient mysticism, dazzling landmarks, and ancient iconography or writing styles just -are- ancient.

3) It reverses the standard perception of European as Central and everything else as Borderlands. By setting Musarra, Il'sha-ah, and Achelb as central locations for the setting we can prominently put European identities as external, but present. The above mentioned Ellenici is meant to reference Greece, or a fictionalized version thereof.

Supporter
Achelb: Large city which relies primarily on Porters to move goods. Built in a mountain pass at the entry to a great green valley largely worked by slaves rather than citizens. Nearby small town also bears the name Achelb and is, essentially, a portertown, where people rest between trips to and from the city up rocky trails while carrying imports and exports.

Ellenici: Divided citystate scattered across many islands. Lots of tiny communities with a few cities. Most locales with more than a modest Town population consider themselves to be independent Kingdoms with their own rulers. Largely a mystery, but there are bigger cities to the north, where the mainland is. Strangely, they do not realize they are cursed.

Il'sha-ah: Egyptian region. A single major center of commerce along the Cobra river, with several large towns and a small city further south along the river, former capital, perhaps? Several cities in the desert that have succumbed to it, half-buried, with dunes rolling in, still. There are people within the region who actively seek to uncover the ruins in the hopes of learning what mortalkind did to earn the Wrath of the Gods.

Musarra: Sumerian/Babylonian region. Several small towns in the area, one large city and perhaps a small city as a rival for control over the region? Ziggurats and ruined former cities along rocky declines and near tainted oases. Some people travel from Il'sha-ah to study the ruins and try to find the cause of the curses.

I could use a few more regions... maybe a jungle to the East or West?

As a kid I remember visiting Petrified Forest National Park in Arizona and being somewhat disappointed that it wasn't an actual forest, but instead just a bunch of (still pretty cool) rocks. So in thinking about a fantasy region, an actual petrified forest could be really interesting. In the past it was a great forest of tall cedars or redwoods, but today all that's left are their petrified trunks standing hundreds of feet tall; eerie but beautiful. There could a number of stories for why such a thing happened; a magical ritual gone wrong or maybe a curse from a god or demon. Most would probably avoid the forest, but every now and then someone will wander into it, hoping to uncover whatever secrets it may hold.

Supporter
That is a really cool concept!

Could do all three versions...

For my ''wastelands'' I often use great salt flats as seen in the Americas.

Mirror-like lands eats your equipment and flesh while slowly crystalizing around your legs is pure horror.

At least to me. Maybe I'm weird.

Supporter
Botswana and Namibia both have salt flats... Definitely something we can play with!

The map is centered on Musarra, Southeast of the inland sea of Khufu. West of Il'sha-ah. Achelb lies just to the north of Musarra, on a mountain near the sea of Khufu with the Lesser Achelb right along the rocky shoreline. Across the sea of Khufu to the north is Ellenici, a sprawling set of islands before you reach the mainland. Aast of Ellenici is Neasc (Nee-eshk) which is a land of old growth forests and mountain ranges. This is where you get the giant living redwood forest. Further north of Neasc and Ellenici is a cold and frozen land of barbaric peoples called the Northlands. Not terribly original, but what're you gonna do?

South and West of Il'sha-ah is the desert of Annam, which stretches south beyond the horizon and west abut the grasslands of the Imba. And beyond that place is the impenetrable jungles of Ngo. To the southeast of Il'sha-ah, south of Musarra and stretching east into the distance, are long atolls and strings of islands populated by fishing and island cultures known broadly as "Myr".

Northeast of Musarra and Achelb are an unnamed land... could really use a hand putting a name to two places separated by dense forest. Here's the map as it currently stands. 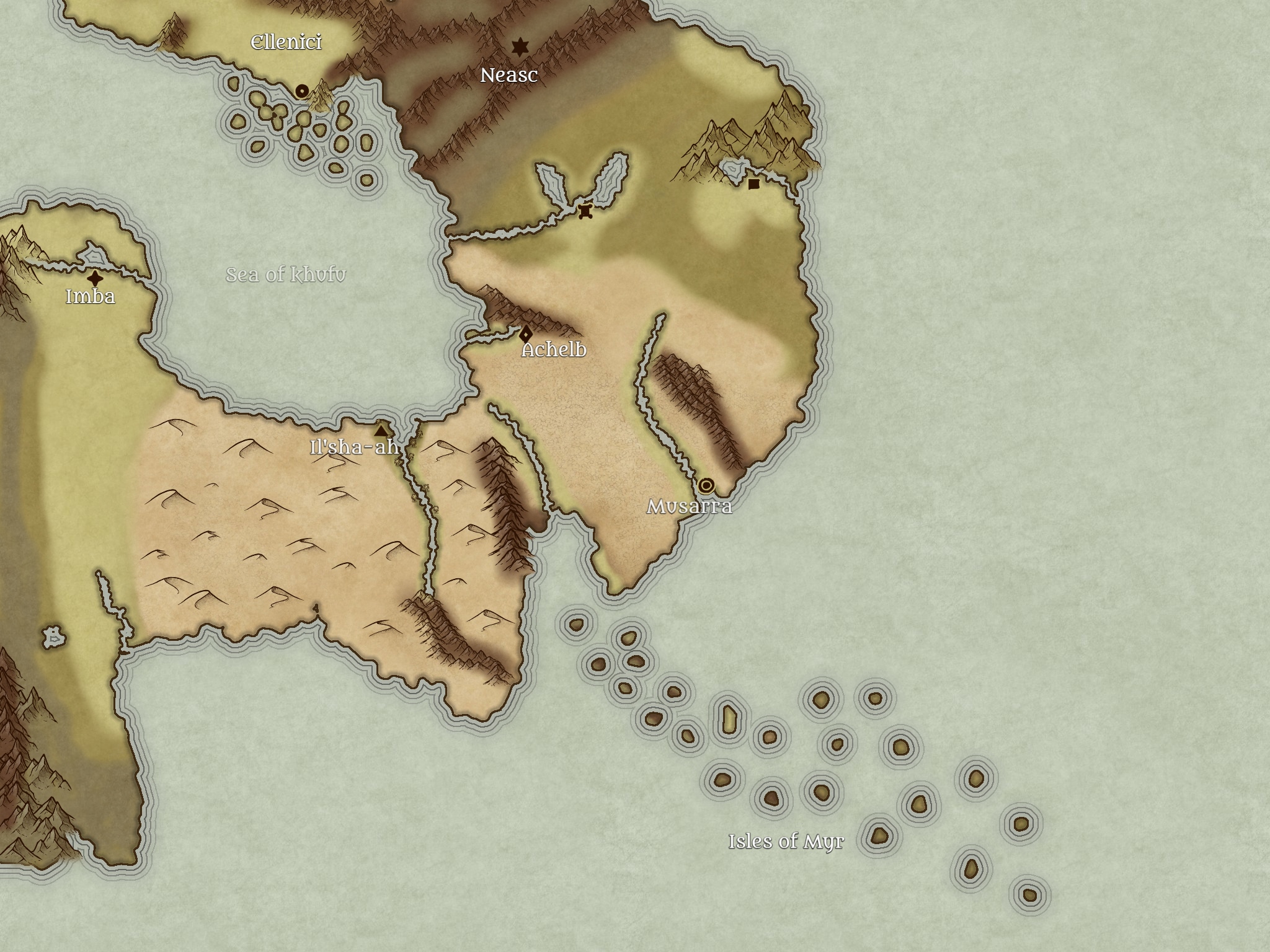 Maybe something derived from the Armenian Highlands or Georgia (Colchis)?

If you crave alphabetical diversity, a name that starts with a K or Q kind of feels about right

Supporter
Something along the lines of the Avars, Bulgars, and Khazars?

Could be fun! Especially since they're often left out of most European history of the Middle Ages.

I also had the thought last night of different areas being under different curses of the different gods. So that not every curse covers the entire planet. That way a campaign can be focused on ending one curse or another, or sequentially ending them all one after another.

Also introduces the idea that there may have been many terrible things done to cause a variety of curses.

I was thinking more south of the Caucasus, but giving more attention to steppe nomads would certainly be cool. The whole history of the Eurasian steppe is incredibly fascinating and, like you said, often overlooked. Making them an "insider" culture instead of the "barbaric outsiders" would be a welcome take.

I recently finished reading Conquests, a Belgian comic which offers a very "sword and sorcery" take on Bronze Age Scythians. I would very much recommend it, if you haven't read it already.

Supporter
Current thought: The easternmost town as a Georgio-Caucasia type locale. To the Southwest, the Scythian style culture which is adapting to rapid desertification.

So a thing about the Sahara is that it didn't exist 5,500 years ago. It was largely copses of trees in grasslands. But desertification began around that time. Around 3,500bc the desertification -rapidly- increased and the Sahara exploded across Northern Africa. I'm thinking this setting is around the same sort of situation. Il'sha-ah used to be a river-city in a Savannah among a variety of other communities stretching all the way to Imba.

But the Desertification is one of the Curses, or so it is thought. And over a few generations it expanded, rapidly, across the world, swallowing villages and rivers, lakes, and forests. Somewhere in the sands is the petrified forest, still sticking up out of the sand dunes.

So the Scythian Styled People may have hung out in the Musarra-Achelb savannahs and mostly retreated northeast as the desert spread, though some would of course become itinerant nomads of the new desert with camels and the like. And in the Northeast... Forest Curse. The place that used to be wide plains became thick forest to make it suck even harder for those Horse-Riding-people...

You talked earlier of petrified forests. Could they also be part of the curse, and include petrified dryads within the trees, perhaps attempting to communicate for help to free them?
Historically, the Scythians may have inspired the legends of centaurs. This might be worth developing culturally.

Regarding Ellenici; just a thought, but classical Greece has been played out a few times in D&D, but Mycenaean Greece much less so (if at all). Instead of cities of marble, perhaps cities of cyclopean stone, and armour of bronze based on the Dendra panoply.

Artist impression of Mycenaean warrior, based on Dendra 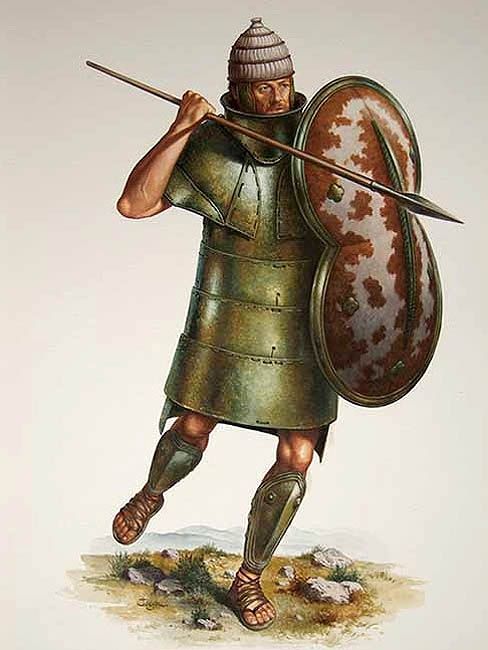 Fairly recent desertification is a cool idea, and leaves lots of opportunity for ruined, sand-coked cities, haunted by.......

GuyBoy said:
You talked earlier of petrified forests. Could they also be part of the curse, and include petrified dryads within the trees, perhaps attempting to communicate for help to free them?
Historically, the Scythians may have inspired the legends of centaurs. This might be worth developing culturally.
Click to expand...

Definitely something to look into, yes. I also like the image of the Scythians, now Kyrans, being forced back not by military power, but expanding sands...

GuyBoy said:
Regarding Ellenici; just a thought, but classical Greece has been played out a few times in D&D, but Mycenaean Greece much less so (if at all). Instead of cities of marble, perhaps cities of cyclopean stone, and armour of bronze based on the Dendra panoply.
Click to expand...

The whole setting is gonna be kinda Bronze-agey, I think. Not going to make the weapons and armor do less damage or act less protectively, but that sort of style and era, for sure.

I remember with some fondness, an adventure called Lone and Level Sands (presumably a reference to Shelley) in White Dwarf 48, featuring a Dune Stalker. The adventure itself would fit your setting, and the dune stalker, which later made its way into the 1E Fiend Folio would also fit as an evil from the Earth Dweller.

Supporter
Inspiration for the Dweller: 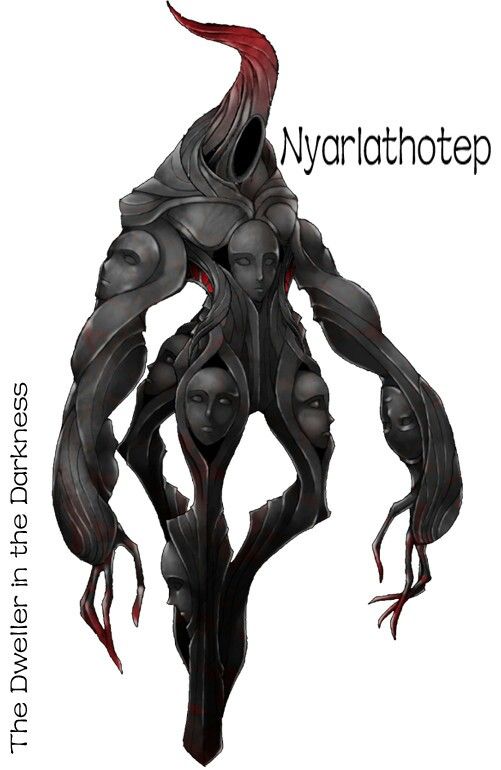 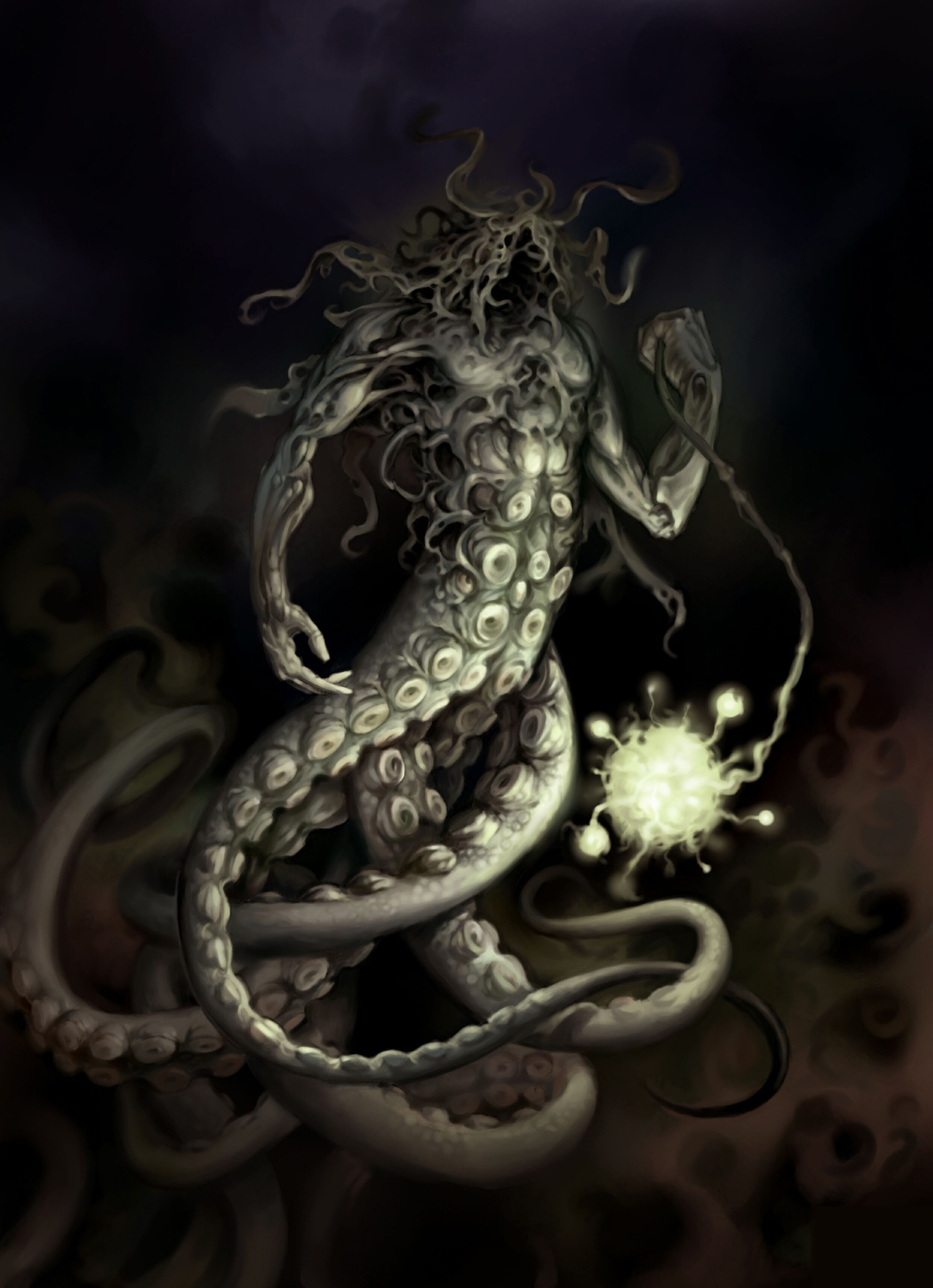 The legend of Ukada and Isra could definitely figure in a bull-dancing cultural aspect on one of the islands, similar to Minoan Crete?

GuyBoy said:
The legend of Ukada and Isra could definitely figure in a bull-dancing cultural aspect on one of the islands, similar to Minoan Crete?
Click to expand...

Actually happened down in Musarra as a coy retelling of both the tale of Gilgamesh and Enkidu at Uruk -and- the wrestling match between Jacob and the Unnamed Angel which lead to his renaming as "Yisrael" or "Wrestles with the Divine".

So a bit further south from the Islands of Ellenici! 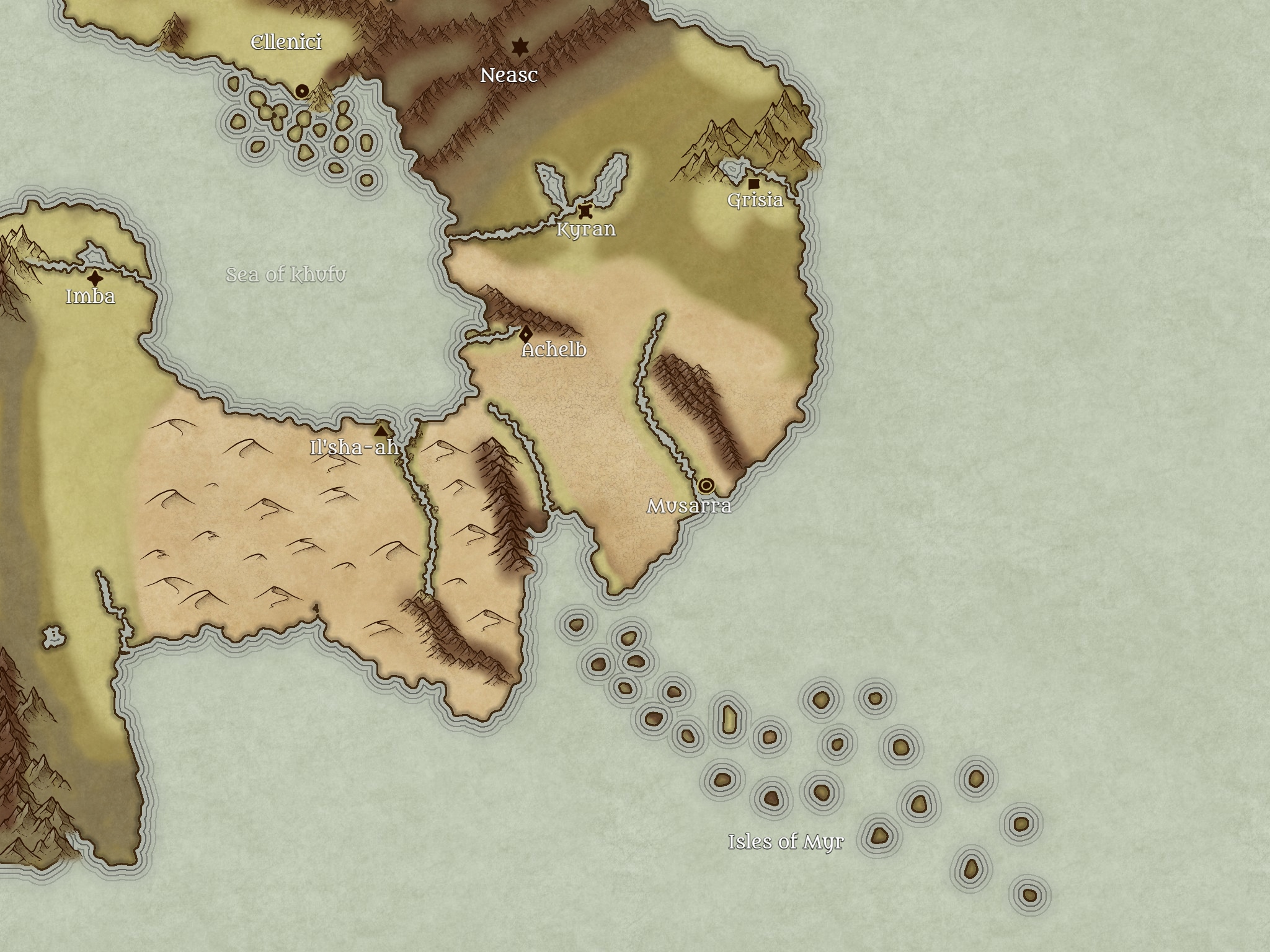