Need a DM screen? Love running dungeons? Then the D&D Dungeon Master's Screen Dungeon Kit may be for you. 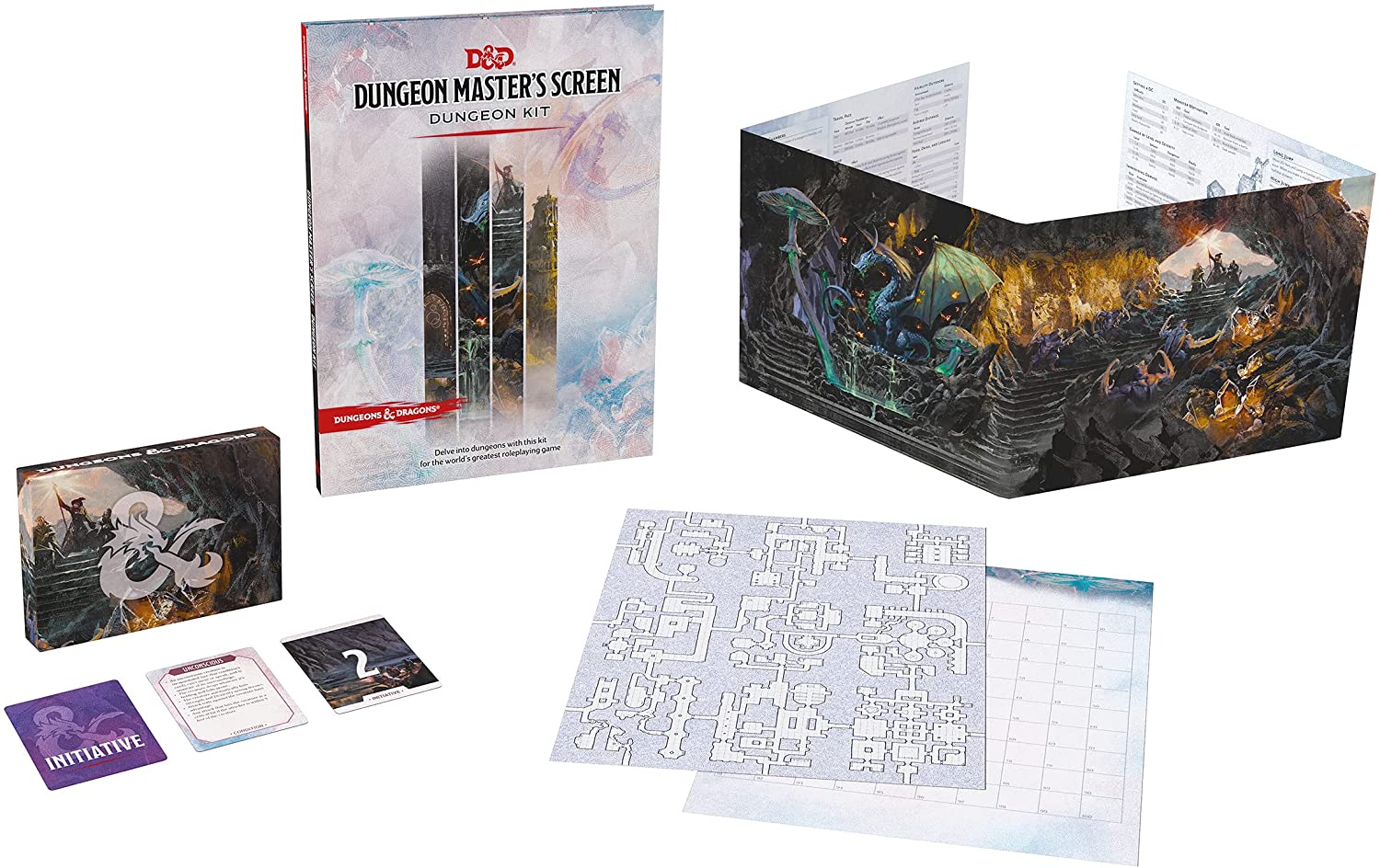 DMSDK is both similar to the Dungeon Master's Screen Wilderness Kit and, like it, has components that have also appeared in the D&D Essentials Kit. That's not necessarily a bad thing. I've wanted to buy a set of condition cards that would provide enough cards to give each affected player a card so they don't have to share. Eventually with enough kits I might get there.

Seriously, though, this dungeon kit, like the wilderness kit, has nine initiative cards, condition cards and a box you can assemble to hold them (with room for extra cards if you combine sets). However, in addition to standard condition cards like deafened, charmed, blinded, incapacitated, grappled, frightened, petrified, paralyzed, invisible, restrained, prone, poisoned, exhausted, unconscious and stunned, it comes with three cards appropriate for dungeon situations. Brown mold, yellow mold, and green slime cards have on the back information on what it feeds on, what destroys it, relevant DCs, and other useful information. As with the other sets' condition cards the back explains the mechanical effects of the condition. 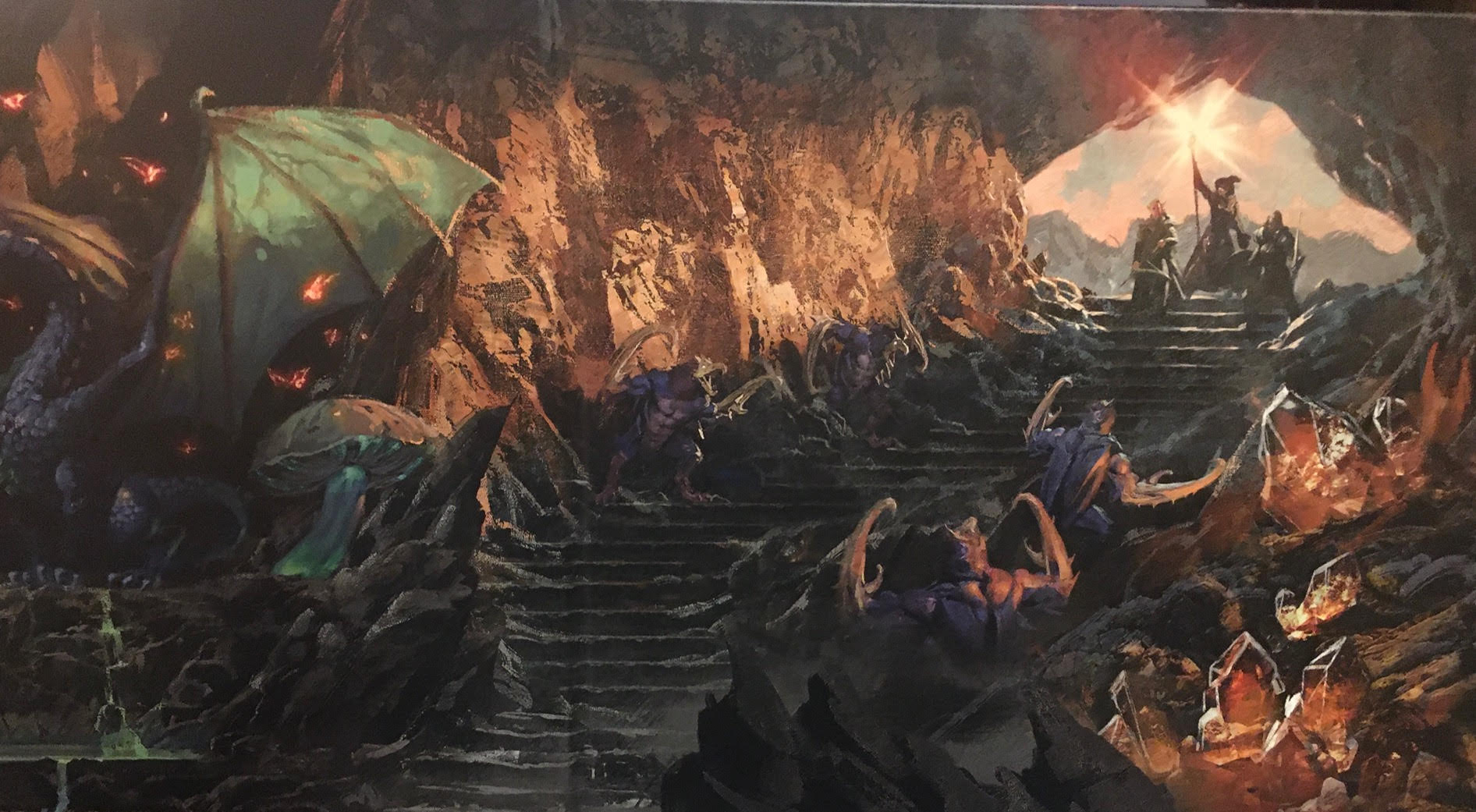 Unlike the wilderness kit, the dungeon kit only has one laminated sheet for use with dry erase markers with a grid on one side. “Actions in Combat” is on the other side. Having combat info on a laminated sheet that can be passed around the table as players may need is nice, but not necessarily practical. If the players or DM used the laminated grid, checking the combat actions side could be awkward. I'm a little surprised a second laminated grid wasn't included, but that's probably because of the next kit component – geomorph cards.

In case you don't know, geomorph cards are tools to design a dungeon quickly. Each card has a design that's a dungeon component with corridors on each side to make ti easy to use them to make new combinations. Designed by Dyson Logos, the variety of shapes in the 36 cards is extensive and imaginative, allowing a DM to throw together a dungeon on the fly in minutes. For that matter, a DM could literally draw a geomorph card randomly as the players reach the end of one card fi they want to be completely spontaneous.

The geomorph cards have a glossy coating, but they're not laminated because they're in perforated sheets. Before you use a dry or wet erase marker, test the coating first. Still, they're really for the GM, and if you play on a battle map, the designs will be redrawn anyway so it's not really an inconvenience, just a caution. 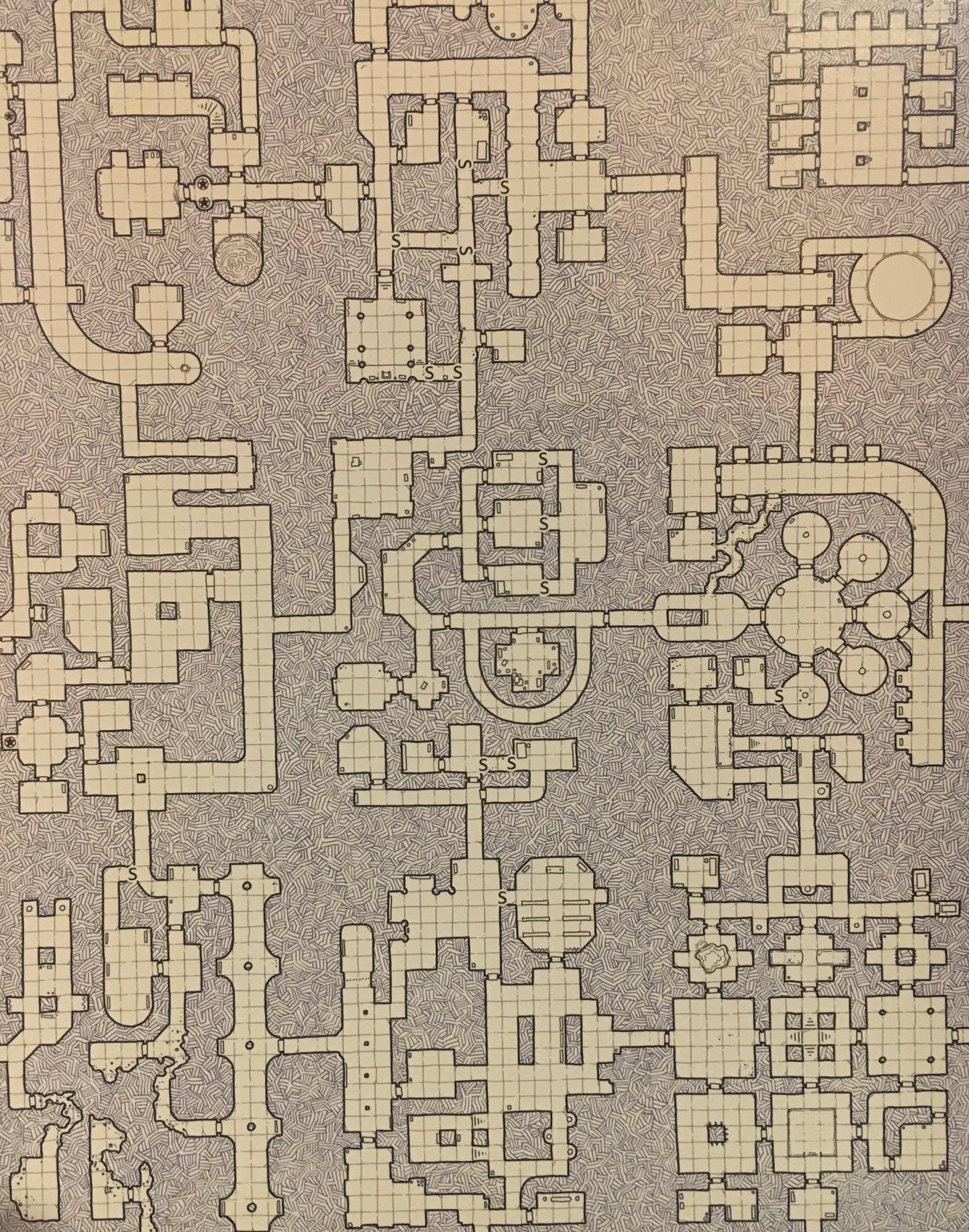 Just like the DM screen in the wilderness kit, this DM screen is solid and sturdy. It has the usual information on conditions, setting a difficulty level, object armor class, etc. in addition to a state of ruin chart, dungeon encounters chart, a random dungeon chamber chart, travel information, and more.

If you already have a DM screen you like, you don't necessarily need this kit – especially if dungeon adventures aren't a big part of your campaign. If, however, you're a completist, and have the wilderness kit, having this one, too, could be nice, especially if you love geomorph cards and/or, like me, are accumulating condition cards.

I still want a city adventures DM screen kit to go with Waterdeep: Dragon Heist and other city adventures with urban chase rules and complications, random encounter, etc., but I suspect that if there's another such kit, it'll be focused on the planes and/or space.

If you like running dungeon-centered campaigns or love geomorph cards, that might be enough for you to pick up Dungeon Master's Screen Dungeon Kit even if you already have a DM screen or the wilderness kit (or Essentials Kit). For an MSRP of $24.99 (but widely discounted) it's a useful purchase or a great gift for your DM.
Last edited by a moderator: Nov 8, 2021
Click to expand...

I think you are using the wrong images here. You are talking about the Wilderness Kit, but the images are from the Dungeon Kit.

Looks like they maybe accidentally copy/pasted their write-up on the Wilderness kit instead of the review for the dungeon kit, since a wilderness kit review was posted on 11/24/20. A simple mix-up, I'm sure.

Sorry about that, fixed!

My urge to collect wants me to buy this. I dont think I need it but I want it and the dungeon screen kit.

Ohhh, another DMs Screen- maybe they will come out with special dice to go with it.

It looks like it may be marginally useful with some laminated sheets and charts to help. The condition cards are handy to keep around, although I still have not cut up mine from the Essentials box.

Selling for $18.60 on Amazon with it in stock. A review is saying that it is an actual screen and not what they have been giving out in other supplements. I took that as being a heavier cardboard to be able to stand up better.

MockingBird said:
My urge to collect wants me to buy this. I dont think I need it but I want it and the dungeon screen kit.
Click to expand...

I have it, and to be quite honest, it's probably the best screen that has been released for 5e thus far. It is geared more towards dungeon adventures (naturally), but it has much more info and less wasted space than the original or the reincarnated DM screens. I can see switching between the Dungeon and Wilderness screens as the adventure dictates, as the wilderness screen is also top notch.


aco175 said:
Selling for $18.60 on Amazon with it in stock. A review is saying that it is an actual screen and not what they have been giving out in other supplements. I took that as being a heavier cardboard to be able to stand up better.
Click to expand...

I suspect they mean that in relation to the DM screens that are produced for the adventure modules (which are utter trash) that the Dungeon Kit screen actually has a wealth of useful information, whereas the Gale Force 9 screens are largely useless.

I'm glad that we're finally getting some good DM screens with more info and less art/wasted space on the DM side.

For all you youngsters out there, geomorphs were one of the very first D&D accessories. With the monster and treasure assortments (the other early accessory) you could easily make your own dungeon. 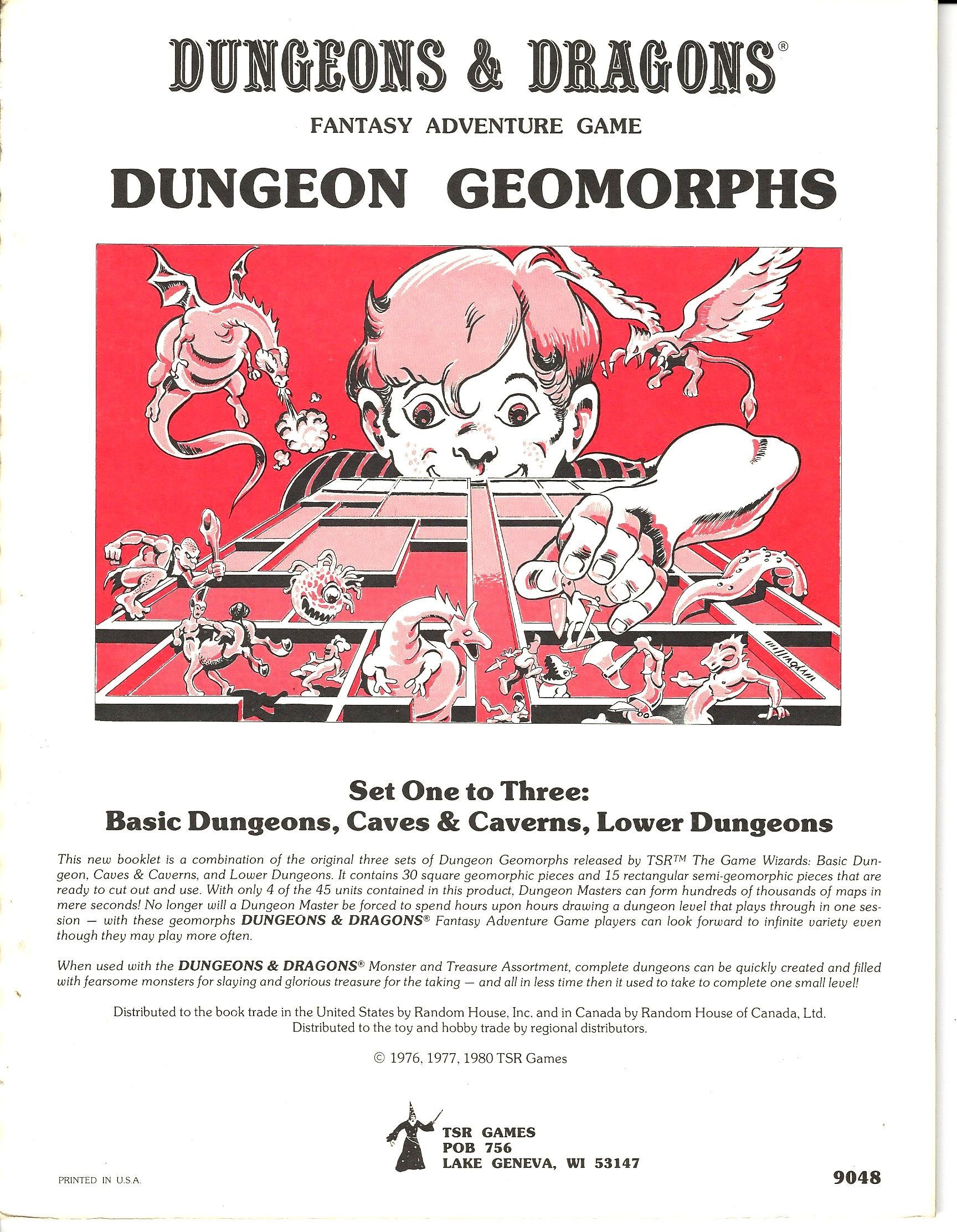 Those adventurers walking into the cave on the DM screen are in for a difficult time, 4 hook horrors and a dragon barely 100 ft in means they should have stuck to farming and such back home!

I’ve picked up most of the GF 9 and other 5e screens…this may or may not make it into the pile.

The screen and the geomorphs sound to my taste. Might have to put this on the holiday wish list.

DriveThruRPG has a few 5E condition card packs.
I picked one up It was pretty decent, four copies of each condition.

I'm such a sucker for GM screens it's not even funny, I'll probably get this set.

Dear Lord, I remember the geomorphs...

A
D&D 5E My WotC dream product: The Dominion Kit

Gift Ideas for the Game Master Who Has Everything