Roll20 & DTRPG Are Teaming Up 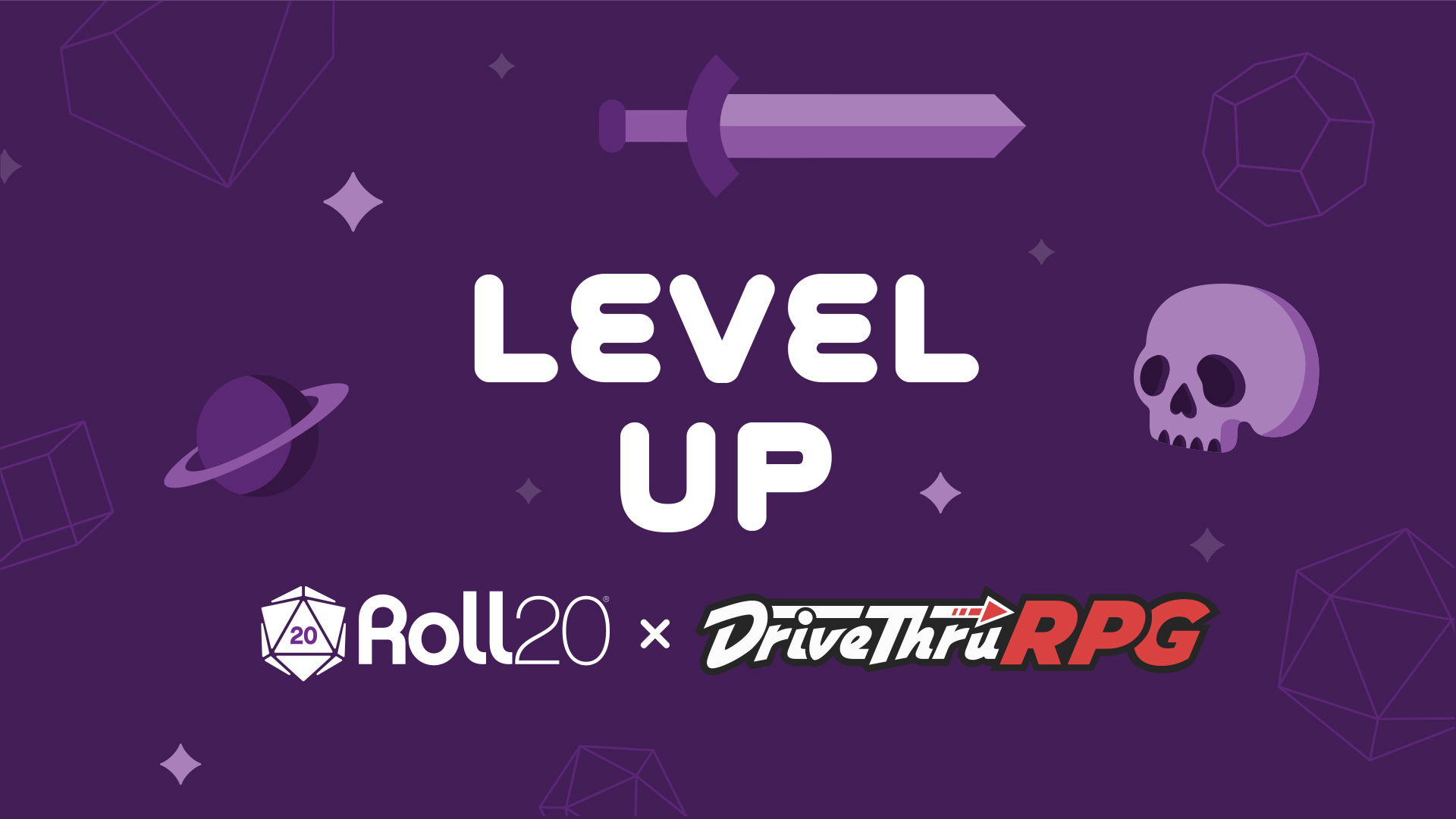 The two companies combine the world's largest VTT platform with the world's largest TTRPG digital storefront. The announcement refers to a 'new entity' which will be adding PDF support to Roll20 which allows users to access any PDF in the platform, with a longer term goal of making DTRPG's PDF libraries available from within Roll20 itself.

You can see a mockup of how this will look below. 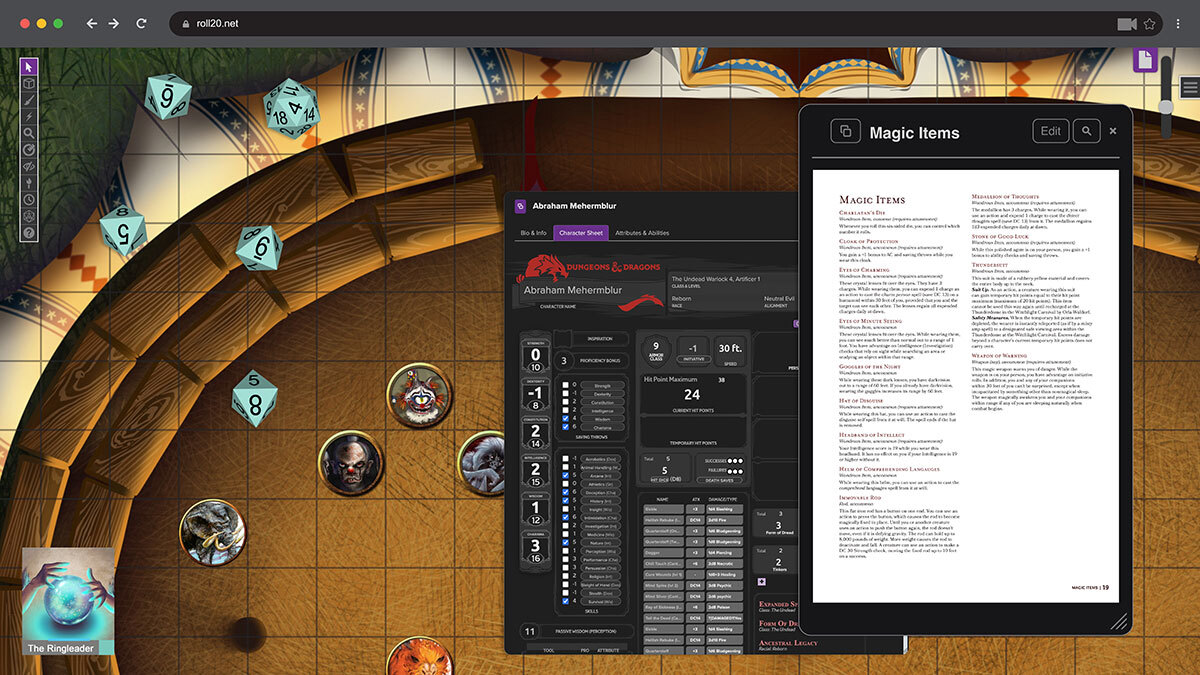 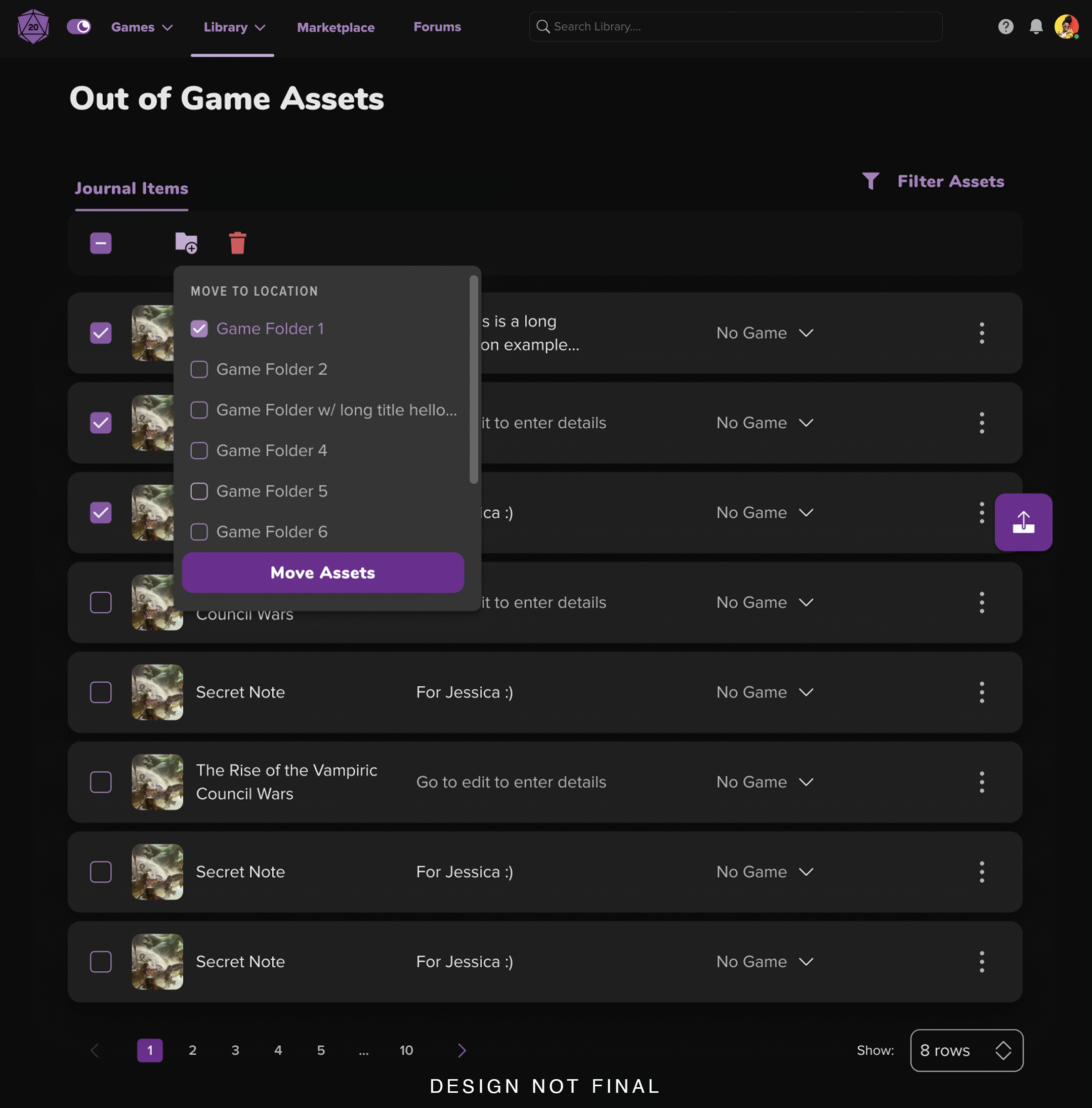 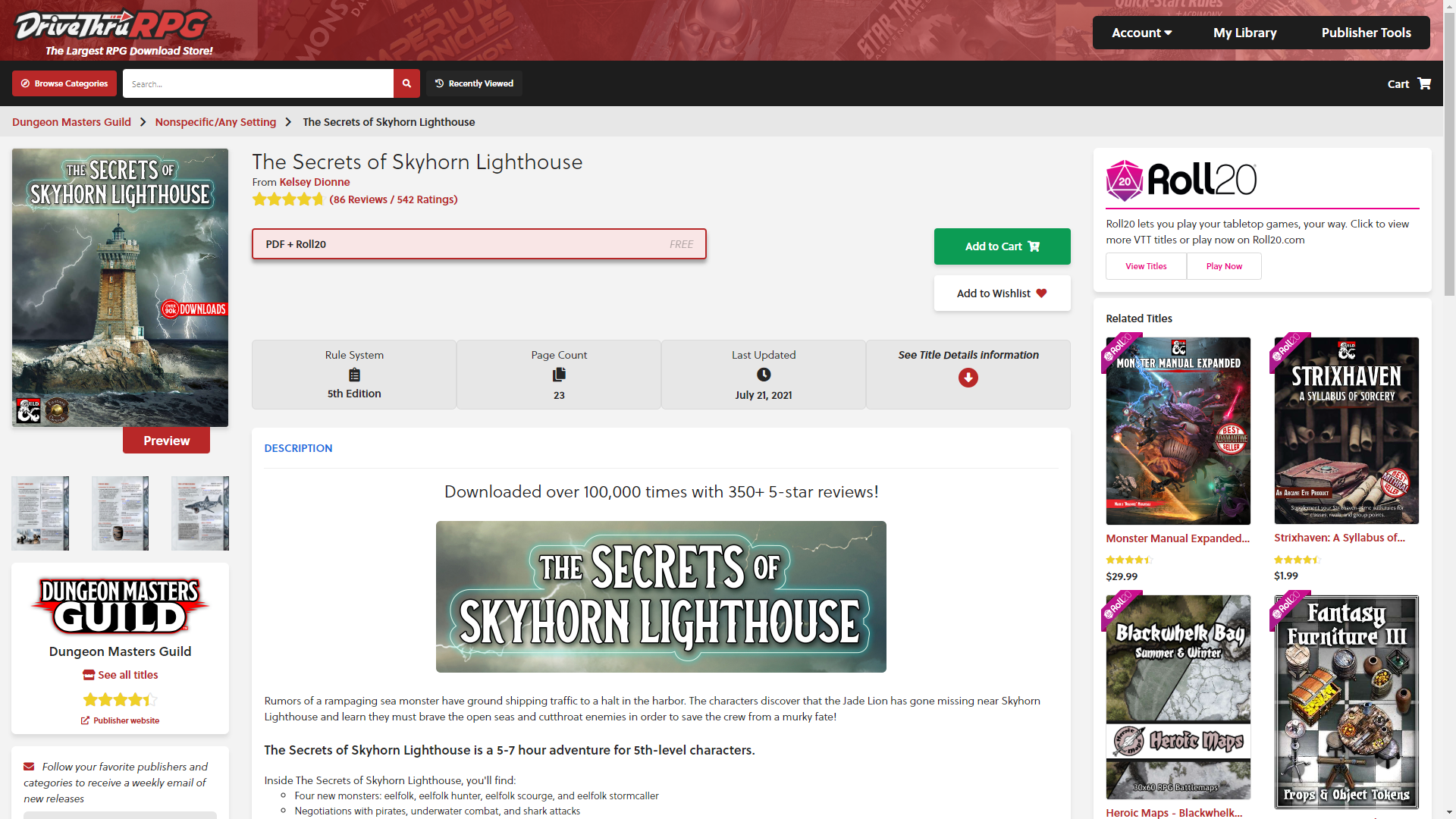 Today, Roll20 and OneBookShelf announced their plans to join forces, bringing together two of the world’s leading digital tabletop roleplaying (TTRPG) content platforms. Roll20 is already the world’s most popular virtual tabletop platform for roleplaying games, providing a digital space for over 10 million users to play TTRPGs daily. OneBookShelf manages eleven ecommerce marketplaces, most notably DriveThruRPG and Dungeon Masters Guild, and is the premier online vendor for the TTRPG industry. The deal empowers players to manage content across platforms for nearly any tabletop game, connect more easily with other players, and step into games immediately, all in one place.

This change forges an unprecedented alliance of industry experience in the TTRPG space, fusing more than a century of combined executive leadership with publisher and community relationships to create the best tabletop platform experience. TTRPG publishers and creators can now easily reach audiences in the virtual game space where they most often play, allowing customers to seamlessly find, share, and play their favorite games.

The joint venture brings together a party of 40 technical wizards dedicated to improving product, code, and user experience. In the coming weeks, the new entity will add PDF support to Roll20’s virtual tabletop (VTT), giving GMs and players the ability to upload, read, share, and immediately play using any PDF in the VTT. At a later date, the companies will make OneBookShelf PDF libraries accessible within the Roll20 virtual tabletop experience, and are committing to ensure that OneBookShelf PDFs will not count toward Roll20 storage quotas.

“Joining forces with OneBookShelf creates the best place to purchase, peruse, and play TTRPGs online, period,” said Ankit Lal, CEO of Roll20. “Since 2012, Roll20 has been the industry leader in virtual tabletop gaming, hosting content from some of the biggest publishers in the space, including Wizards of the Coast, Paizo, and Chaosium. With this deal, we gain significant progress on several of our user promises that dramatically improve the VTT, and will work together to continue adding new and exciting features to our already industry-leading platform.”

“Our mission from the get-go has always been to make it easier for publishers and creators to reach a wider audience of roleplaying fans,” said Steve Wieck, CEO of OneBookShelf. “By combining forces with Roll20, we empower game makers to present content across a wider variety of formats, whether character creators, virtual tabletop, digital editions, or print. Customers will be able to support their favorite games, in any format they desire, with one economical purchase, and they will be able to use their content on roleplaying’s most trusted platform.”

Following the closure of the deal, Ankit Lal will continue as CEO, having been promoted from President of Roll20 in January 2022. He brings 14 years of experience leading strategy, product, analytics, and marketing teams across several industries, most recently at Google and ClassPass. OneBookShelf CEO Steve Wieck will join the Roll20 governing board and executive team, bringing 35 years of experience across the TTRPG industry. Wieck’s credits are numerous: he co-founded White Wolf Publishing, producers of Vampire: the Masquerade and other World of Darkness properties, founded DriveThruRPG in 2004 (which later combined with RPGNow to form OneBookShelf, Inc), and later served on the CCP Games Board of Directors following the company’s White Wolf acquisition. Together, the two combine a wealth of product development and industry-specific knowledge.

Roll20 partnering with OneBookShelf is the latest move under Ankit Lal’s leadership to help realize a new vision for the platform. Since Lal assumed the CEO position, Roll20 has added features highly demanded from fans including Dark Mode, one-way barriers with Dynamic Lighting, and updated compendium sharing. The platform’s performance-improving initiative, Operation Fire Bolt, has reduced in-game load times by 57% and boosted launch speeds by up to 50% for almost all games. Over the rest of 2022, Roll20 users can look forward to continued VTT improvements, faster dice results, more Dynamic Lighting updates, improved character creation and character sheets, and more.
Click to expand...

@Jer What you say might well be the case. But then I remember that I used to buy comics at a company called Comixology and stuff can go bad quickly. So very much wait and see on that one.

Zehnseiter said:
@Jer What you say might well be the case. But then I remember that I used to buy comics at a company called Comixology and stuff can go bad quickly. So very much wait and see on that one.
Click to expand...

Comixology still exists. It is owned by Amazon.

Reynard said:
Comixology still exists. It is owned by Amazon.
Click to expand...

The second sentence is the problem The customer experience got far worse.

Not to make Roll20 look bad. The could also add good stuff to drivethru. Or at least keep it as good as it is. But there is always the possibility that they could make it worse like Amazon did. Time will tell. I just always have that fear when I hear about mergers.

Reynard said:
Comixology still exists. It is owned by Amazon.
Click to expand...

Kind of. It exists as a brand but basically now Amazon treats all of their digital comics as Kindle comics. It's a mess compared to what it was before. They kept them as separate technologies for a while but finally just forced all of the comics onto Kindle as of earlier this year.

However this is still in line with the chips analogy - Amazon had a digital comics branch and Comixology was a digital comics company. They bought Comixology and ran them in parallel for a while but eventually merged them together because they were doing the same thing and they were perceived as redundant. From my perspective as a customer they phased out the wrong technology - they should have kept the Comixology side and got rid of the Kindle comics altogether - but that's a critique of their technology choices and on their end it probably was more cost effective to just make comics buyers buy via Amazon's regular website. It's not really comparable to OBS hypothetically phasing out Print on Demand (in fact it's much more like my hypothesis that we should expect the Roll20 Marketplace to go away and become an OBS site - it would be the same move for the same kinds of reasons).

I’m with Jer with the Amazon/comiXology statements, the newer version just isn’t as good as when comiXology was a separate site. I don’t use roll20 but still buy various PDFs so probably not an impact to me for the merger.

Jer said:
But that is an example where the two businesses are doing the same thing. That's like a Disney acquiring 20th Century Fox move where you buy a company that is doing the same thing as you because of their intellectual property or other assets to that you can sell them yourself. You get a lot of overlap there because you can just move the chips brand and recipe over to your existing chips manufacturing facilities and shut down the ones you no longer need.

In this case it's two businesses who are selling different things. Their core businesses complement each other, so you don't find redundancies and cost savings there. Getting rid of the printing would presumably be cutting off profits (or else OBS would have stopped the printing side long ago) so it wouldn't make sense to look for new efficiencies from the merger there.

If I were working for these companies in HR, Finance, internal tech support, and possibly customer support/service I'd be worried about my job being redundant in the merger. Those are the kinds of places where companies who are doing this kind of merger/acquisition immediately look to shave costs because that kind of work is analogous to the chips example above - two groups doing the same thing where you can just consolidate the work into a single group.

Even the development staff for the two products are probably safe for now - down the road they might merge the two products and create a single group to develop it but that'll take years, and logistically the storefront product and the VTT product are so different I doubt merging them together would be an easy or even desirable task. I'd only be concerned if I were someone who was a dedicated developer of the Marketplace portion of Roll20 (if they even organize things that way) - I strongly suspect that one of the first orders of business will be to integrate the Roll20 Marketplace into OBS's framework - especially since they announced a while back that they were working on building connectors between the two. Eventually I suspect the Roll20 Marketplace code will go away entirely and be replaced by an OBS storefront.

Your thoughts are sound and crisp... They are based of logical and rational deduction therefore none of them are arguable, you are completely right.
What is missing in this picture is a particular feature that usually makes any rational deduction not applicable. The time-horizon of the people called for such operations is short, very short... This brings to decisions that should be opposite to the ones you wrote: it is a total paradox but the maxing of results in the short terms leads to irrational choices. I lived this situation in my company and saw that behaviors in other external mergers... It will hardly be like you wrote due to this contraint: the managers (who usually have 2-year contracts), the advisors (who have even shorter terms, usually tied to the formal merger - a matter of months not even years), the consulting company (similar case of the advisors) will never look after to things done in the good way for the long run: all of these ppl are appraised on the value created in the very short term...
This is a really sad picture i lived on my skin...

Roll20 Has A New Mobile App