This edition of RPG Crowdfunding News focuses on RPG crowdfunding projects that end between Friday, December 20th and the day after Christmas: The Christmas Batch. Why end your campaign during the time of the year when continents of the world are on holiday? I think the answer is either they’re expecting a CHRISTMAS MIRACLE (capital letters) or these creators have never heard of Christmas and how it distracts a trivial portion of the Earth. Let’s check out the campaigns that will end while I’ll be headed to the proverbial grandma’s house. 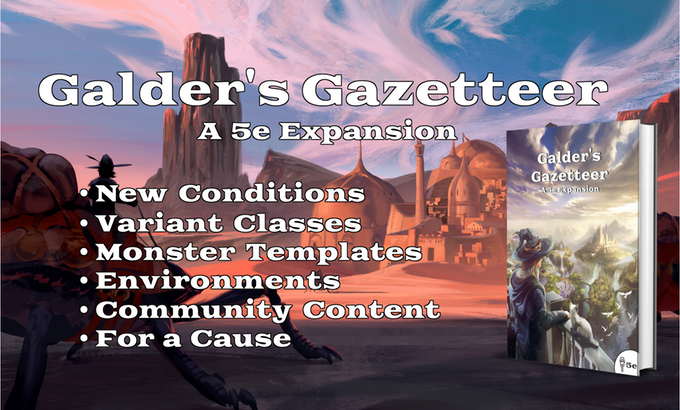 ENDING THE FRIDAY BEFORE CHRISTMAS DAY

“Galder's Gazetteer is a major expansion to 5e for advanced players and GMs. The wizard Galder has traveled to many, many worlds. Along his journeys, he has taken notes on the mysterious and fantastic things he's encountered. Along with new classes, races and monsters, Galder's Gazetteer goes in an exciting direction by adding new game elements and fleshing out underdeveloped RPG mechanics. It's a more "traditional" tabletop game expansion: adding new bits to the mechanics and having features that key off of them. Look forward to beautiful illustrations and full color pages filled with new conditions, variant classes, monster templates, environment templates, archetypes, ancestries, feats, spells and more!”
Click to expand... 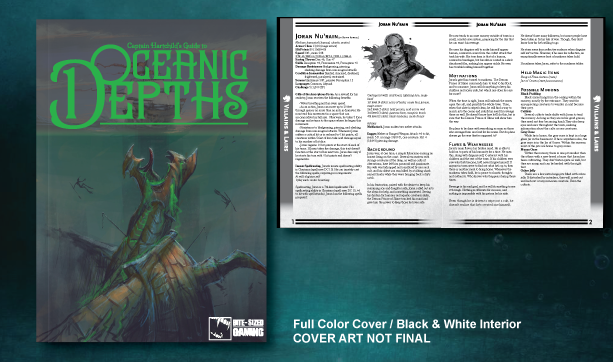 “An extensive aquatic supplement compatible with 5th Edition. This product offers a massive amount of resources for 5th Edition players and DMs alike, allowing them to more fully explore the oceans and seas of fantasy campaign worlds. All product within this project are fully compatible with the standard rule set of 5th Edition and each section has been painstakingly conceived, designed, and edited to ensure a seamless integration. Everything will have an aquatic theme, though many of the creatures, items, and player options are not regulated to a life spent only on the open sea.”
Click to expand... 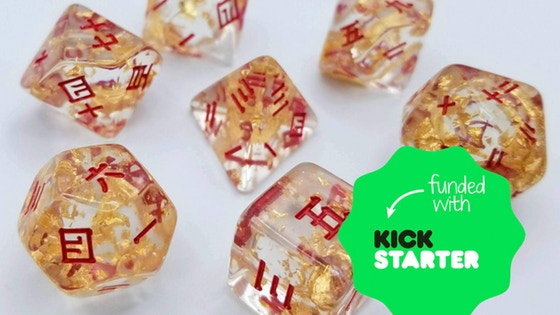 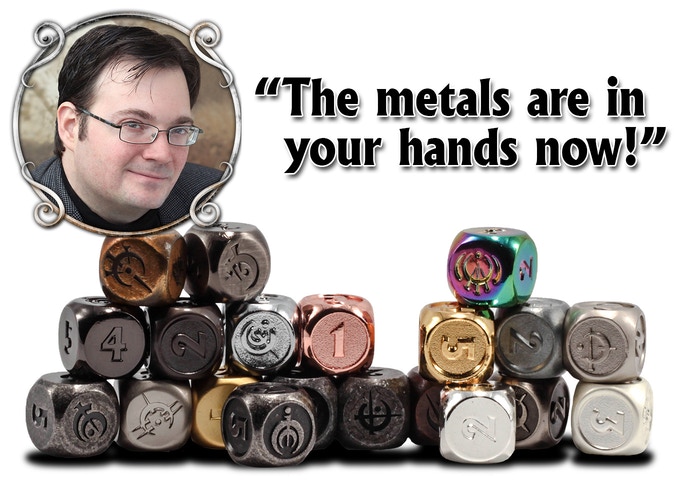 “20 solid metal dice, each with a unique plating, finish, and Allomantic symbol from Brandon Sanderson's Mistborn. We're Crafty Games. We've been making Mistborn tabletop game products since 2012. We have already made a roleplaying game with multiple supplements in both eras of the Mistborn universe, a board game pitting players against one another as leaders of the Great Noble Houses, and an acrylic Mistborn Allomancy Dice set. We came up with a set of 20 - yes, TWENTY - solid metal dice, each with a unique plating, finish, and symbol from the Mistborn novels by fantasy mastermind and NYT bestselling author, Brandon Sanderson. These symbols replace the 6 on each die, making them ideal for any purpose where rolling high is desired. This includes most dice pool systems, such as the one featured in the Mistborn Adventure Game.”
Click to expand... 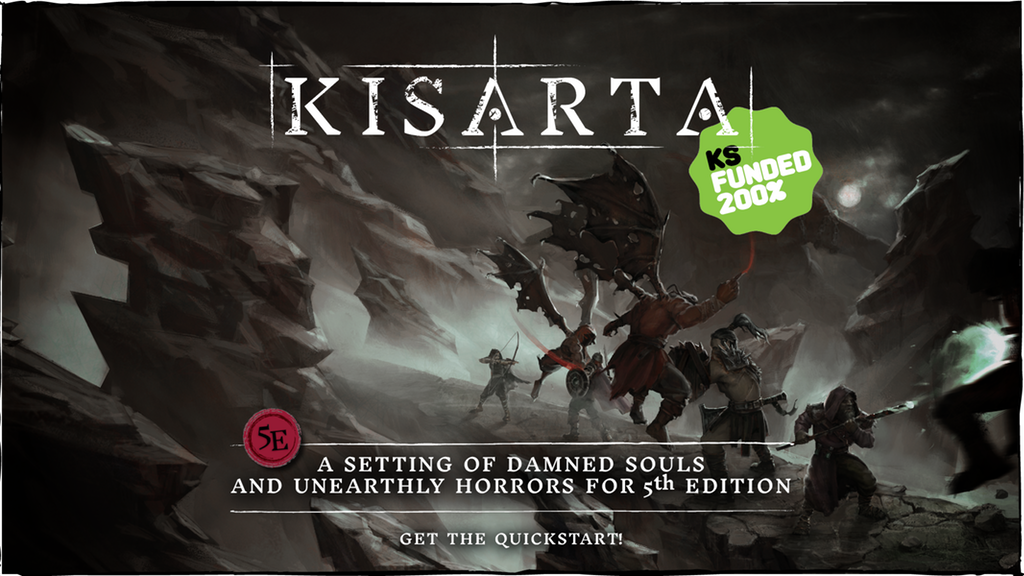 ENDING THE SATURDAY BEFORE CHRISTMAS DAY

“Face horrors from a netherworld as a Soul, dead and damned, in this dark fantasy rpg setting for 5th Edition! Kisarta is a new RPG Setting Rulebook for the 5th Edition (OGL) that will be published worldwide in English and Italian language. Welcome to Kisarta, a world of danger and horror, where you will face chaos, insanity and damnation as well as deadly enemies and frightening monsters. The netherworld realms of Kisarta are ruled by unholy and terrifying beings, and inhabited by the souls of the dead that awaken there. It is a place of struggle, and every adventurer must face constant danger and harsh challenges. Each player impersonates the Soul of a dead person awakening in a tomb near the mysterious City of Limbo. Souls must fight, plot, track down cults and conspiracies to uncover ancient secrets hidden among the forgotten ruins and in the minds of the beings that live there. Only then can they hope to carve out a place for themselves within the tangles of the Great Game, where true power lies.”
Click to expand... 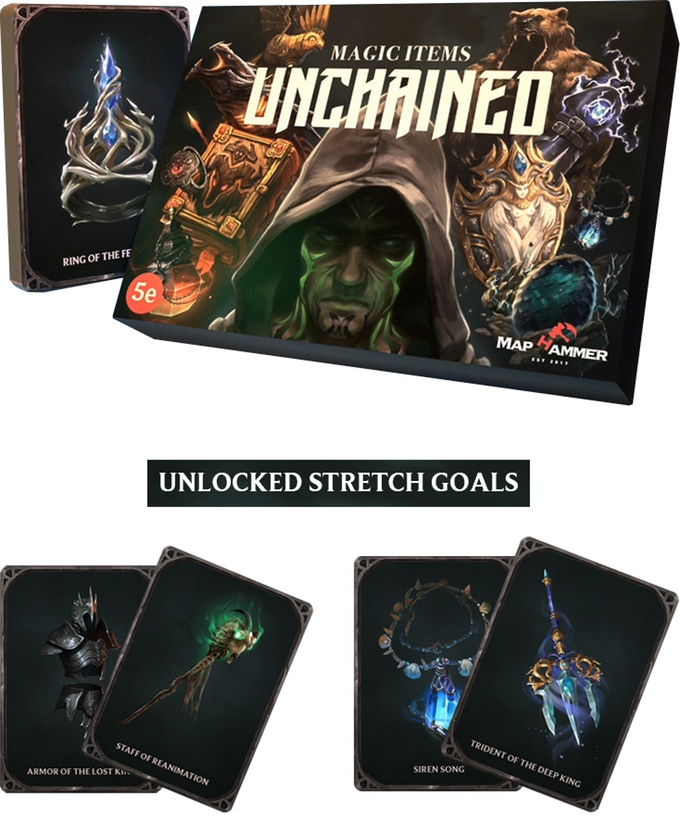 “Magic Items Unchained is a deck of 60+ magic item cards for Dungeons and Dragons 5th Edition. The deck contains cards from common to legendary rarity. The cards bring new and unique ideas without interfering with the balance of the system. The items come to life by the stunning artwork of different artists. These high quality, laminated cards are the perfect handout to reward the players for their heroic deeds. The deck comes with a separate sheet of paper which contains some inspiration for the dungeon masters, like location ideas, crafting materials and plot hooks regarding the items. These ideas can help in the making of side quests for any story, so they are very useful when the players go off the track, or it can save precious preparation time.”
Click to expand... 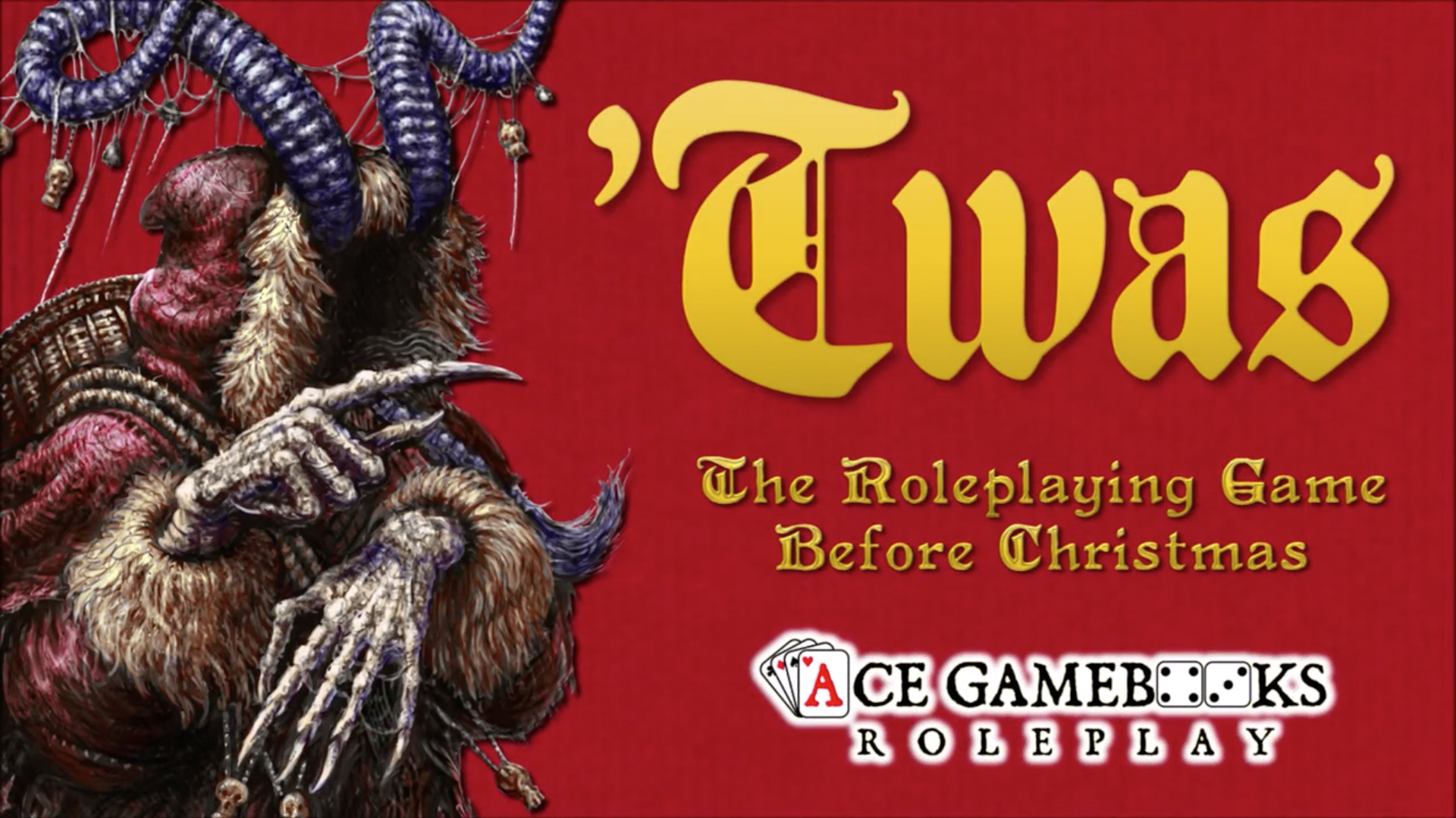 ​
'TWAS - The Roleplaying Game Before Christmas by Jonathan Green 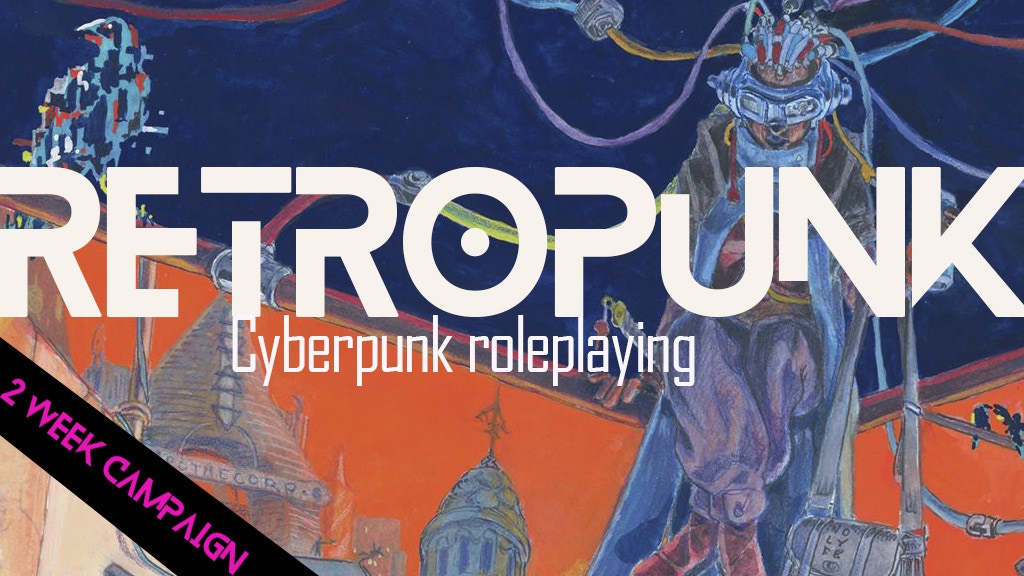 “Modern and old-school cyberpunk tabletop game design set in a world where the digital and physical create a new hybrid reality. Retropunk is a tabletop roleplaying game where you embody characters in a futuristic hybrid reality. The digital and the physical have merged. People navigate their daily lives in something beyond augmented reality by way of a neurochip implanted at birth. The characters in Retropunk have hacked their neurochips in a way that lets them navigate hybrid reality just like everyone else, but disables monitoring from the system. They use their anonymity as armor while they fight against the corporatocracy which controls urban sprawls that span countries and continents. One of the player characters' goals in Retropunk is to take resources away from those in power and to use what they take to sustain and grow their resistance, taking on more powerful factions that facilitate these megacorporations vice-like control.”
Click to expand... 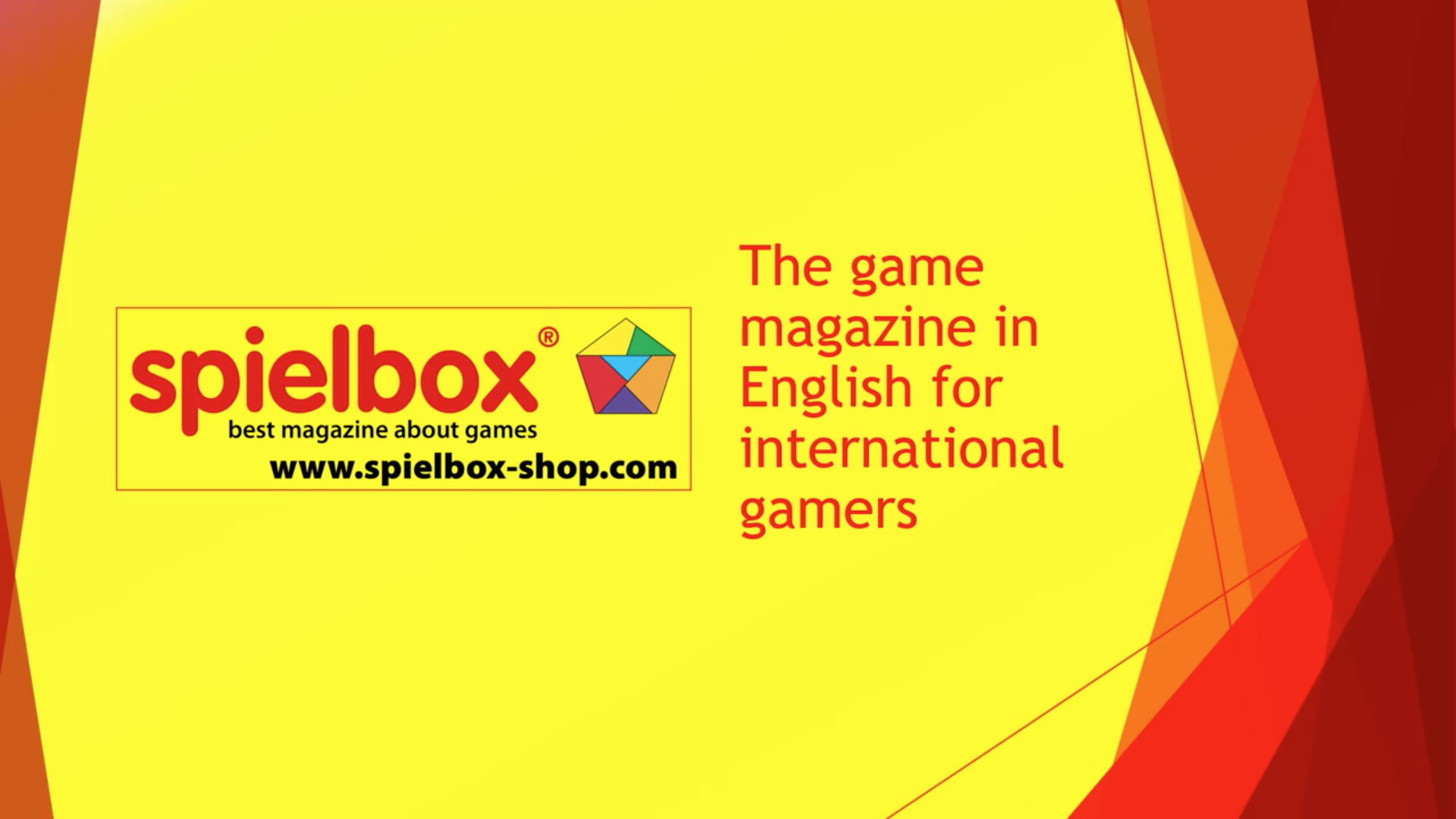 ENDING THE SUNDAY BEFORE CHRISTMAS DAY

spielbox - Game Magazine since 2010 by spielbox

“Seven times per year, the magazine delivers game reviews, news, fair reports and suggestions for & variations of already familiar games. spielbox® is the greatest and oldest magazine in the world that focuses on board games and card games. Since 1981, whole generations of well-esteemed and professional reviewers have offered potential game buyers helpful information. Seven times a year, our special interest magazine delivers up-to-date, extensive information on new national and international games, game reviews by independent journalists, suggestions for and variations of established games, reports around the world of games, [and] fair reports. Almost every issue contains (often exclusive) add-ons to new or already well-known games.”
Click to expand... 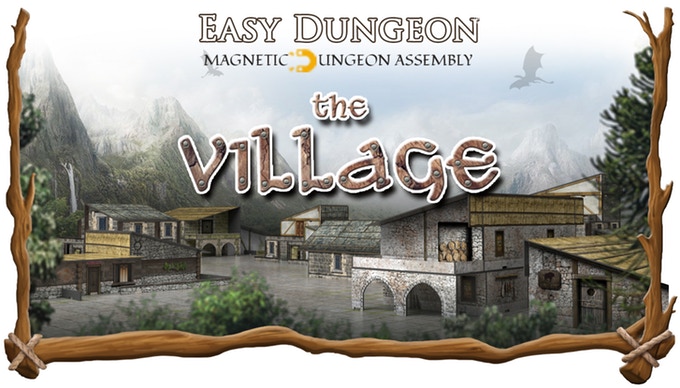 Easy Dungeon: The Village by Games06

“Modular Magnetic Terrain for Role Playing and War Games. It's time to get out the dungeon! Or if you prefer, to start where usually all the adventures begin before entering some dark maze, that is...in the open-air! With the Easy Dungeon magnetic modular system you can create your setting exactly as you want and change it whenever you like, without having to always use the same shapes for houses, inns, taverns, markets ... And once the game session is over, the Easy Dungeon can be stowed away completely in its box, which makes it very comfortable to carry around even when playing at a friend's house!”
Click to expand...


TURRIM Dice - It's How Wizards Roll by Moonmares Games 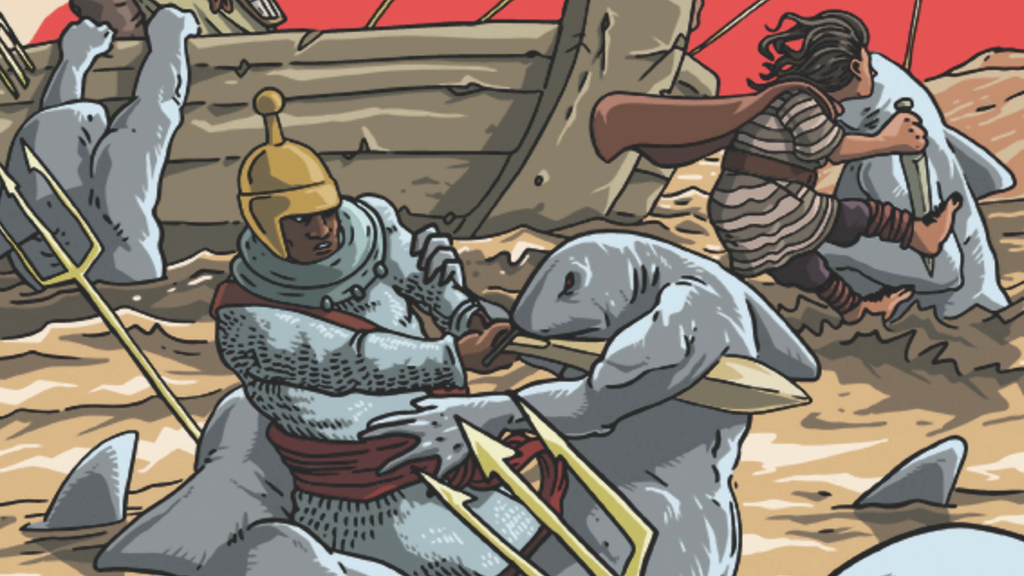 ENDING THE DAY AFTER CHRISTMAS

“Wave Three of Adventures for AsA, a Solo 5e D&D system. The third and final wave of adventure for the AsA system. Yep more adventures and more fun, all because Avalon Games loves creating fun, exciting games. This time around we have five adventures and gaming supplements for the system, all by the same creative team that have produced well over 40 such adventures and campaigns. The system is usable for anyone who has ever wanted to play a solo 5e D&D adventure. It’s all here: the inns, the monsters, the treasures, the secrets, and the story!”
Click to expand...

VAST KAVIYA by Mike Myler
EGG’S CHRISTMAS QUEST: In conclusion, I guess these crowdfunding campaigns just happened to end when they end. In that spirit, I wish each of these campaigns much success this holiday season.

NOTE: This article includes affiliate links to DriveThruRPG. As a DriveThruRPG Affiliate I earn from qualifying purchases.
Click to expand...

On Morrus’ Unofficial Tabletop RPG Talk podcast this week, Morrus and Peter review these Kickstarters at 20:50: