This article features RPG crowdfunding projects that end by August 6th. EN Publishing’s Mythological Figures & Maleficent Monsters for 5th Edition headlines this article because of its prominence among the current batch of projects including other D&D offerings and games with original systems like Monster Care Squad, Necronautilus, WAIT FOR ME, When Shadows Fall, and more. 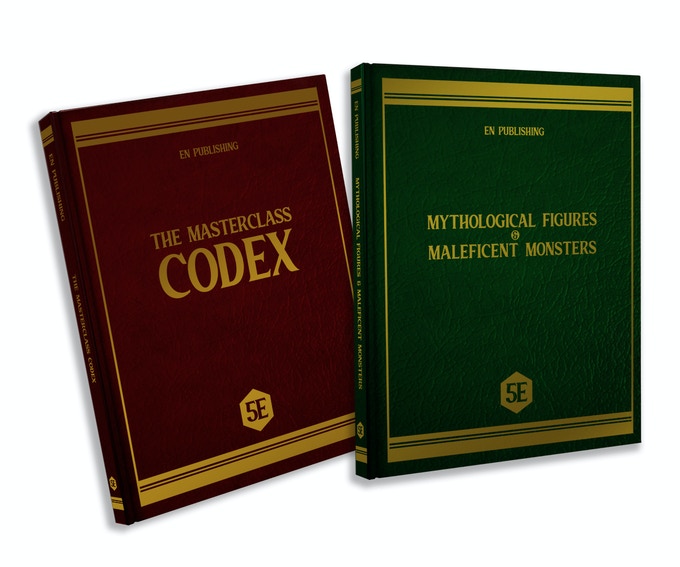 “A beautiful 5th Edition hardcover tome of legendary figures from Achilles to Robin Hood, Thor to Dracula, King Arthur to Baba Yaga! Mythological Figures & Maleficent Monsters delves into these paragons of literature, fable, and folklore. From Ancient Greece to Victorian England, deepest Transylvania to the High Seas, you’ll meet champions and thieves, pirates and knights, demigods and fey queens, ancient evils and urban legends. Archetypal heroes meet exemplars of villainy like Blackbeard, Rasputin, Dracula - even Lucifer, the Lord of Hell! From Mike Myler’s popular by-request column, this 230-page epic compilation of over 100 legendary heroes, villains, and monsters brings these characters to life for the 5th Edition of the world’s oldest roleplaying game. Plus a foreword from James M. Ward, author of the original Deities & Demigods!” 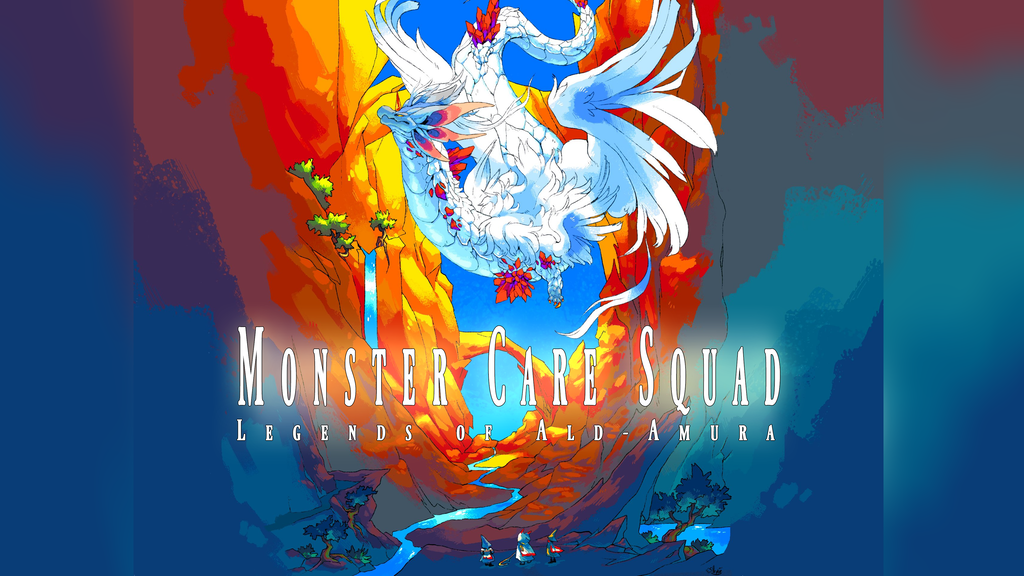 “A Ghibli-inspired tabletop adventure of healing Monsters and solving local problems in the gentle world of Ald-Amura. Monster Care Squad is a tabletop roleplaying game set in the tranquil world of Ald-Amura. The peaceful state of the world is threatened when a mysterious poison known as The False Gold finds its way into the veins of the world's Monsters, causing terrible, maddening Wounds, which drive these incredible beings into uncontrollable rages. The once unbreakable bond of harmony and respect between Humans and Monsters is on the brink of collapse, and it's up to you and your allies to set things right. You play as Monster Care Specialists, elite vets equipped with the knowledge to heal any wound, given enough time and preparation. In the game, you travel this amazing Miyazaki-esque world, going from town to town in hopes of finding Monsters infected with The False Gold, diagnosing their illnesses, crafting cures, and healing their minds and bodies of the strange, magical Wounds which drive them to destruction.” 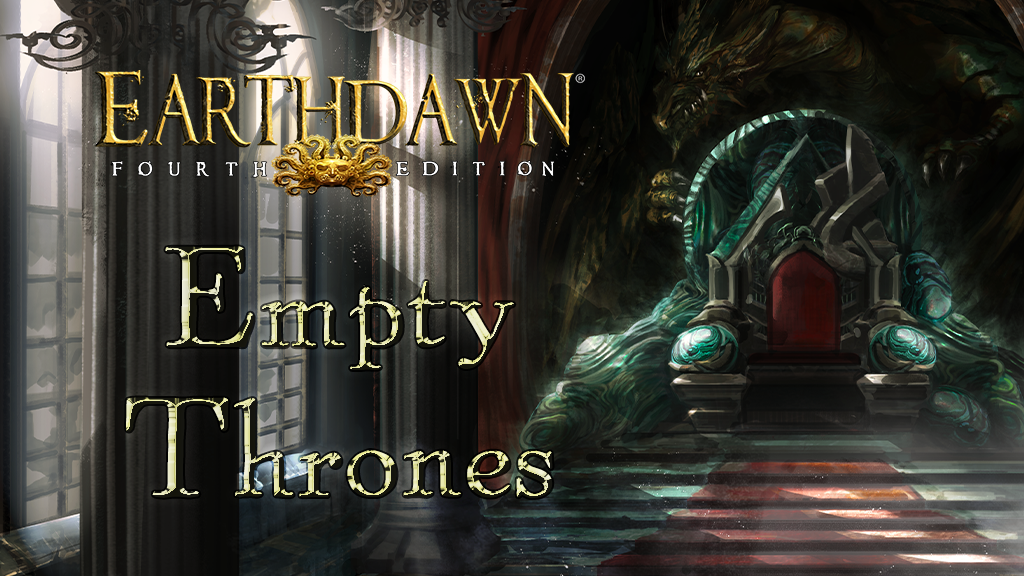 “Earthdawn is a fantasy role-playing game currently in its fourth edition. After more than 25 years it continues to deliver a setting tinged with a compelling mix of high magic and horror flavored with a dash of post-apocalypse and a generous sprinkling of hope. Empty Thrones is a 160-page campaign sourcebook detailing monumental events in Barsaive. Uhl Denairastas, First Minister of Iopos, dies under mysterious circumstances with no proclaimed heir. Orbiting around this presumed assassination are spies, thugs, and schemers desperate to claim the Malachite Seat. This book details five specific moments and includes setting information, adventure frameworks, and a look into how these events shape their world. With this book, gamemasters can have their players infiltrate an Iopan spy-ring, become involved in the City of Ash's revolution, negotiate a peace in southwest Barsaive, and determine whether or not the City of Thieves is worth saving. Above it all, the dragons and their children look on to determine the actions that must be taken to prepare Barsaive for the future. Legends of Barsaive: Haven Volume 1 is a 400+ page adventure book that will include the eight modules previously only available in ashcan-style paperback booklets. This product will include an expanded version of the Haven guidebook specifically created for this product, which includes setting specific details for the campaign series. This version of the guidebook is currently planned to only be available in this compendium product.” 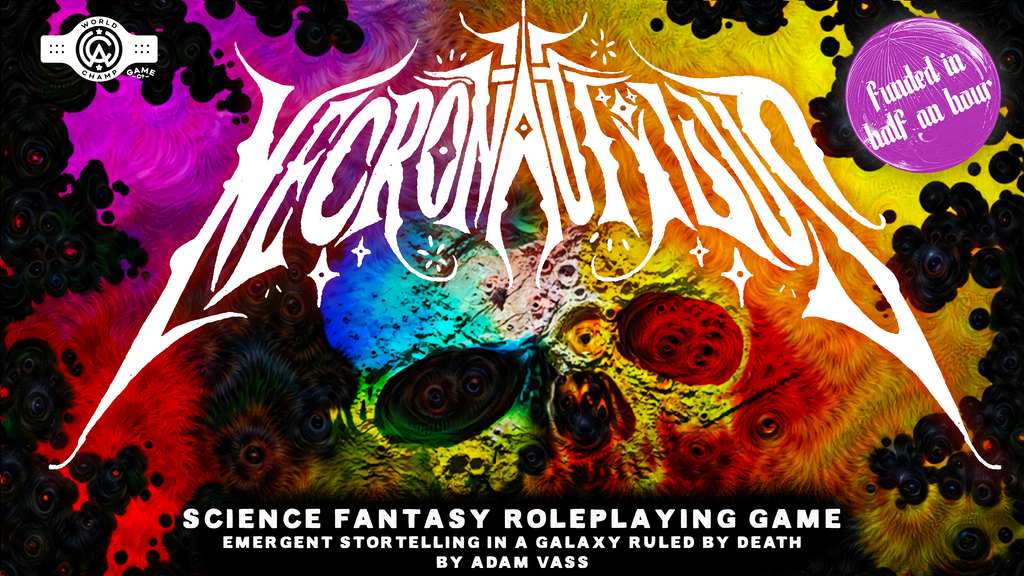 “Catalogue new planets in a dead galaxy, learn powerful magical words, & remember who you once were. For story gamers & osr fans alike. Necronautilus is a tabletop roleplaying game for a Gamemaster and 1+ players. In it, players act as souls bound to clouds of noxious gas called Death Agents, exploring a universe outside of time consisting of planets full of creatures who ended up there when they died. While using their Words of Power to act on behalf of the blind god Death and maintain order in a post-death galaxy, they’ll see their powers grow and splinter while exploring the corporeal life they left behind. If you like games like Troika!, movies like Guardians of The Galaxy, or music by Spirit Adrift, Ghost, or Black Sabbath, this game is for you.” 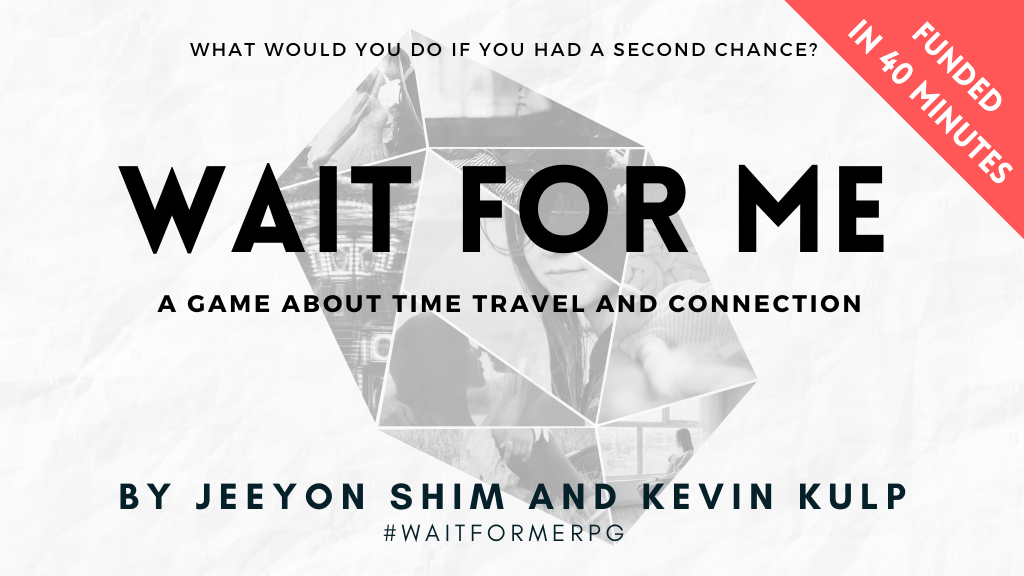 WAIT FOR ME from Jeeyon Shim and Kevin Kulp

“A 22-day journaling game about time travel and connection. WAIT FOR ME is a three week journaling game about time travel and connection, for one or two players, with prompts emailed to you daily from August 3rd to August 25th 2020. In this time of social distance we may feel trapped and untethered. What if you could glimpse the future or relive the past? In WAIT FOR ME, build a handwritten journal and write yourself messages in your own diary about what was and will be in this game about longing, memory, and forgiveness. Your diary is on your bed, open to the most recent page, and peering down the hall you can see yourself. ...You have exactly 50 words to try to convince yourself of who you are before someone comes down the hall and you are pulled away to —“ 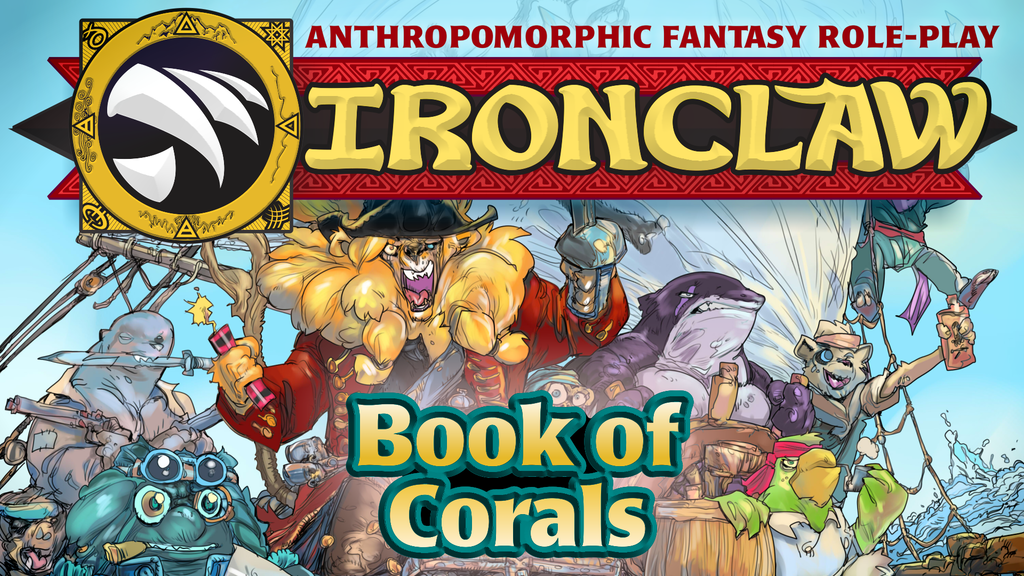 “New species, classes, and high adventure for anthropomorphic role-play. The Book of Corals adds new options to your IRONCLAW: Anthropomorphic Fantasy Role-Play campaign. New species to play, such as clever Dolphins, fast Frilled Lizards, powerful Komodos, gigantic Orcas, colorful Parrots, and quick Thylacines. New careers, from the humble Pearl-Divers, to the dangerous Demolitionist, and the strange practices of Autochthonous Magicians. New places to go, from the pirate colony of Varnazath, to the mysterious ruins of Firenze, the dangerous jungles of Kandurak, and the submerged city of Oragardr. New adventure to experience. Will you throw in with pirates who yearn to be free, but at what cost in blood? What of the native cause against those who would colonize their land? And would you disturb long-forgotten ruins at the risk of unearthing some monstrous horror?” 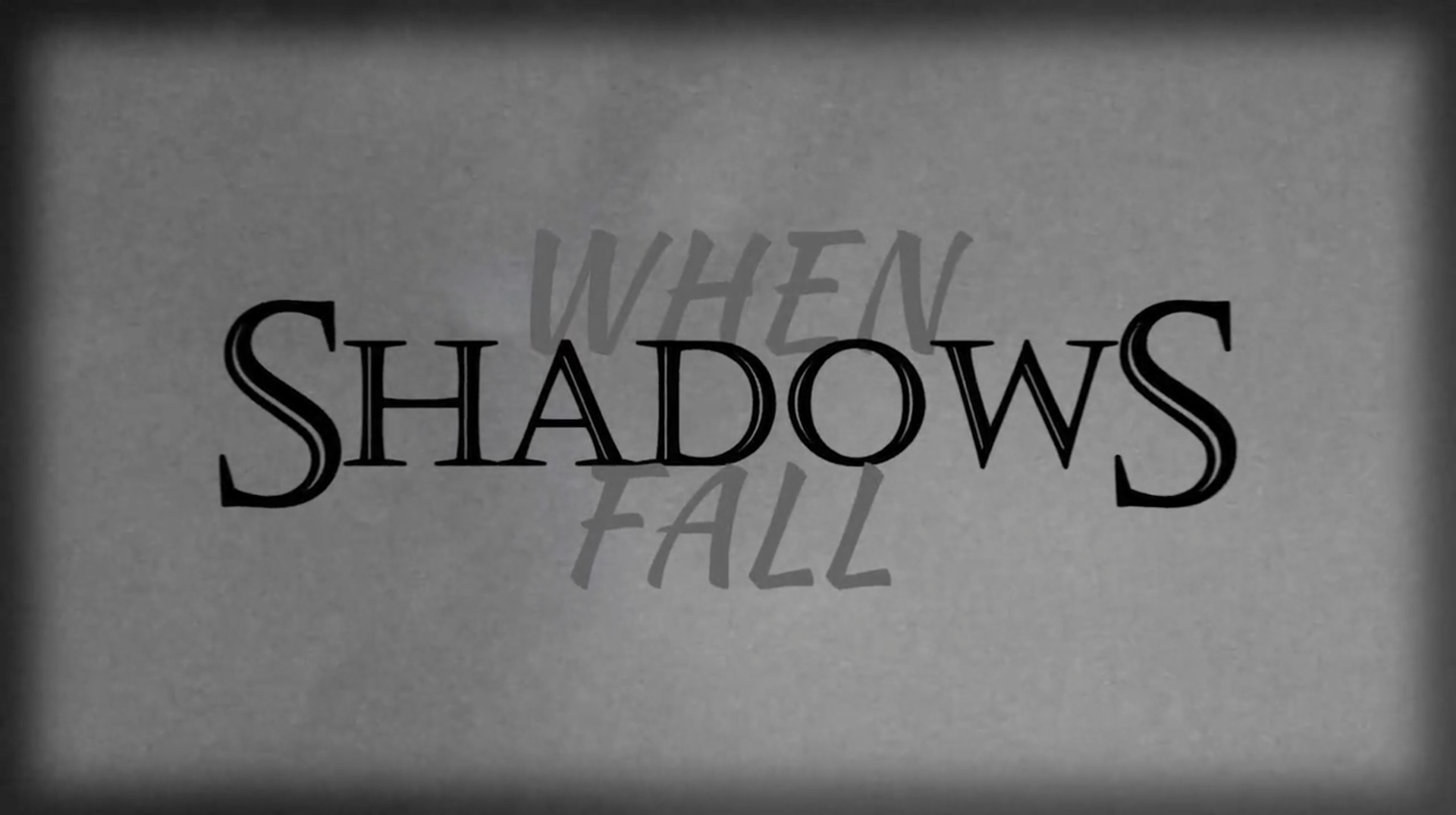 When Shadows Fall from Neal Latham

“A post-apocalyptic horror roleplay game. When Shadows Fall is a horror roleplay game about surviving in a post-apocalyptic UK. Set in an alternative 90s where power stations have been destroyed by a strange fog that drifts across the land, the loss of electricity is the least of humanity's problems. The Shadow alters as it moves, corrupting and twisting the earth with its malice and hatred. Whole communities are gone, with their people disappeared or forever mutated. The seemingly sentient mist has been given many names by the survivors; The Fog, The Shadow ... Hell. Those still alive have only a few choices: live a nomadic life to keep away from The Shadow, migrate to high rise buildings or fight back. The question becomes, how short do you want your story to be?”

Egg Embry is part of EN World's Columnist (ENWC) program as well as a columnist for Knights of the Dinner Table, d20 Radio, the Open Gaming Network, the Tessera Guild, and GAMA's magazine, Around the Table. His area of focus is tabletop RPG crowdfunding campaigns.
If you enjoy the articles on EN World, please consider backing the EN World Patreon. Every dollar helps to make these articles possible.
R

Campo de Mitos could be interesting. However, it would also be nice if it included information on how to use the setting in the 1930s during the Spanish Civil War.

Monster Care Squad seems really interesting; although I mostly want ot be a player, not a GM.

Man, all these years later, and metaplot is still a thing in Earthdawn. I remember a book not unlike that was slated for release right when the line went under. Near 20 years later... and here we go.