Shadows of Esteren, the highly awarded RPG (four ENnie Awards in 2013 and 2016) from Studio Agate, has a Kickstarter to create their first artbook, Shadows of Esteren: Dark Romanticism. Included in the campaign, they’re reprinting the core rulebook as “a Kickstarter Special Edition with a cover from Yoann Lossel. A new reward tier, $50 ‘RPG: CORE BOOK AND BONUSES’, allows [backers] to get it as well as all stretch goal attached.” Last, year, I spoke to Nelyhann during the Fateforge Kickstarter (here) and at Gen Con. This time, I talk exclusively about their free preview artbook and campaign as well as Studio Agate’s French versions of 7th Sea and Chronicles of Darkness and their plans for more English-language Fateforge for Dungeons & Dragons Fifth Edition. 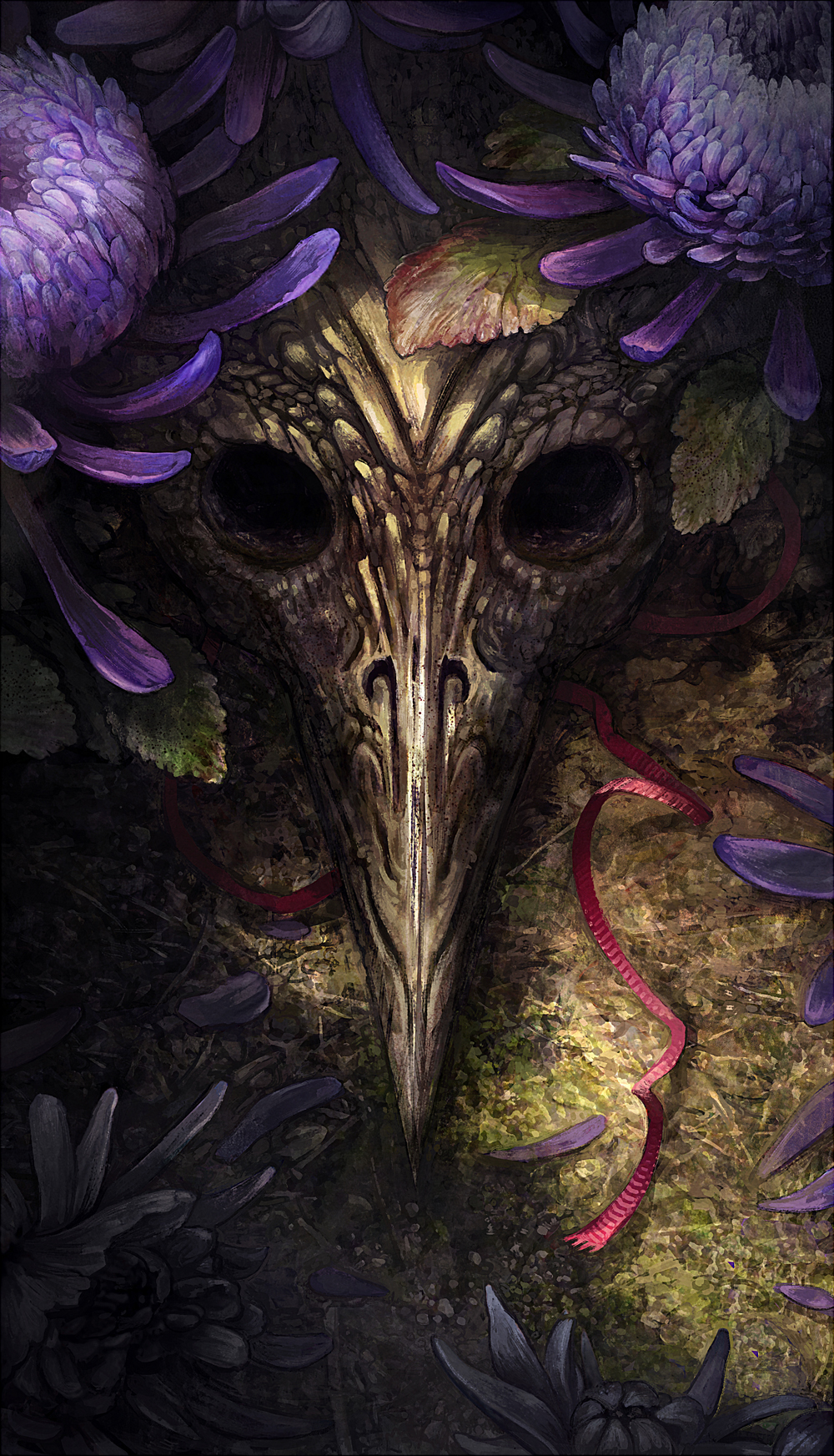 Artwork by Chane.
​
EGG EMBRY (EGG): Thanks for talking with me about your project, Nel! For those that aren’t aware, what is Shadows of Esteren: Dark Romanticism?
NELYHANN (NEL): Hello Egg! Thank you for having me. Dark Romanticism is the first artbook dedicated to the universe of Shadows of Esteren. It will be a full-color book of 200 pages compiling memorable art of the series as well as many new illustrations, alongside game design notes and short atmospheric texts.

EGG: What makes now the right time to collect this RPG’s artwork into a single volume?
NEL: Actually, I believe I can say we’ve wanted to make an artbook from Shadows of Esteren’s inception. Since we’re currently celebrating the eighth anniversary of Esteren’s release, now seemed like a good time!

EGG: Every year at Gen Con, my buddies and I would gawk at the amazing art on display at the show. Among the must-see booths is Shadows of Esteren, the art is next-level work. Who produces the majority of your pieces?
NEL: Illustrations and graphic art in general have always been at the heart of Shadows of Esteren. For 10 years, a whole team has been building this universe. Listing every artist involved in this beautiful project would be too long, but GinL, Nico Jamme, Chris, Gawain, Yoann Lossel, Chane, Fred Pinson, and many others have all contributed to forging its unique identity.

EGG: As an art director, how do you get that level of beauty combined with such emotion and unity of narrative?
NEL: Achieving the kind of unity you’re talking about requires a lot of work art direction-wise. There are three of us handling this direction on the studio’s books, whether on Shadows of Esteren or on Fateforge. Whenever we commission art, we compile exhaustive visual documentation, artistic references, and indications on framing and composition. Each illustrator gets feedback all through the realization of the artwork. It is long, complex work, but we keep in mind that the more care we put into art direction, the more fitting the final result will be, contributing to the spirit and soul of our work.

EGG: You’re planning to offer a 12-page preview of the art book. What pieces are you showcasing? What do you think will surprise or delight Shadows fans?
NEL: This preview will show the direction we are taking with the artbook. In addition to being a selection of our best pieces, it will include many game design and art direction notes, as well as narrative texts and juicy details for watchful readers looking for secrets. On that note, many fans are eager to get their hands on the secrets of Esteren, but many of these secrets are hidden in already released texts and illustrations. In this 12-page preview, for example, readers will be given a new outlook on the sketches of Jalan’s book, featured in 2014 in The Monastery of Tuath.

EGG: This Kickstarter is a bit different than others in that it covers a brand new Shadows of Esteren art book, Dark Romanticism, and offers discounts on the RPG stock you planned to offer during UK Games Expo, Gen Con, and Spiel, all canceled for 2020. Why offer that stock here instead of selling it online or continuing to warehouse it for next year’s convention season?
NEL: We’ve never had an online shop proper. Putting one together is a frustratingly complex task, but we’re determined to make it happen one day! As it is, we attend many conventions, from which we get a sizable part of our revenue. Our studio has a dozen artists, authors, and illustrators on its payroll, so we need constant income to sustain them. Additionally, with this Kickstarter, we can fund new print runs for several items that are currently out of stock. The campaign’s results have exceeded our expectations, and receiving such support from the community is very comforting in these troubled times.

EGG: What does the future hold for Shadows of Esteren?
NEL: Our next step is Volume 2 of Dearg, a good chunk of which has been taken care of. The first half has been translated, and the second half has been written and is currently being edited. I have playtested this campaign from start to finish, which has allowed me to thoroughly test certain new mechanics. Our plan is to launch the Kickstarter when the book is well and truly complete, the better to schedule things. After that, it will be onward to the big Secrets! We also have several side projects brewing, which we may publish in-between larger releases.

EGG: I’m going to jump from your Kickstarter to some of Studio Agate’s other RPGs. Last time we talked, it was about Fateforge for Dungeons & Dragons Fifth Edition. Those books, like Shadows, are wonderfully illustrated. How have they been received?
NEL: Very well, so much so that Shadows of Esteren’s little brother might end up growing bigger than its elder! We have grown very attached to this new universe. Though I have laid its foundation with Iris, she is currently the one directing this series while I keep working on Esteren. For Fateforge, our ambition is to release an Encyclopedia every year, which will delve into the world of Eana. Each Encyclopedia will come with a dedicated bestiary. The release of the first duo is planned for July on Kickstarter.

EGG: Let’s talk about another RPG that’s coming from Studio Agate, Vermin 2047. What is it about, and is it being translated into English?
NEL: Vermin 2047 is the new edition of the Vermin role-playing game by Julien Blondel. In France, it is a legendary game, and we are glad to work on this new edition with its author. The Survival Kit, containing everything needed to play, will soon be completed in English. Actually, we are going to offer the PDF to the Dark Romanticism backers to thank them for their support. Vermin is a projection of our world in 2047, a chilling, dark post-apocalyptic setting. The game master can fine-tune the realism and grittiness of the game via a system of Game Modes. In Vermin, there is no nuclear war or great catastrophe: civilization as we know it has just crumbled. Vermin brings forward deep questions on the place of mankind in the ecosystem and the consequences of men’s actions. Julien Blondel has been working on it for about twenty years and his message has—unfortunately—never been as relevant as it is today.

EGG: You have the French language license for all of the Chronicles of Darkness and 7th Sea? Do you strictly do translations or do you create original supplements in French such as Paris by Night?
NEL: For Chronicles of Darkness, we strictly do translation work for Vampire: the Requiem and Demon: the Descent. 7th Sea’s translation, however, also comes with many original creations. Actually, we are currently writing an official 7th Sea campaign for Chaosium and John Wick, titled The Price of Arrogance. We plan to release it simultaneously in French and English. There is strong demand on the part of the French community for scenarios, and it seems to us that it is also the case for the English-speaking community. A Kickstarter for this original 7th Sea campaign is scheduled for 2021.

EGG: What are the most popular Chronicles of Darkness RPGs in France?
NEL: Vampire: the Requiem remains the most popular. We ran a poll to ask the community what they wanted after Vampire, and the winner was Demon: The Descent. Translation is underway and it should be released in 2021. We are very happy to work on this, as Demon has never been translated into French. What we do next will depend on what the community wants, but it seems like people are interested in Changeling.

EGG: Thanks for talking to me. For fans of Shadows of Esteren, where can they learn more about your Kickstarter and Studio Agate?
NEL: Our Kickstarter page provides much information. We hope we can soon be present in the flesh again to meet our community face to face!


“Celebrate the 8th anniversary of the most awarded French RPG, grab the last printed copies and discover our first art book”
Egg Embry participates in the OneBookShelf Affiliate Program and is an Amazon Associate. These programs provide advertising fees by linking to DriveThruRPG and Amazon.
Click to expand...

Egg Embry is part of EN World's Columnist (ENWC) program as well as a columnist for Knights of the Dinner Table, d20 Radio, High Level Games, the Open Gaming Network, the Tessera Guild, and GAMA's magazine, Around the Table. His area of focus is tabletop RPG crowdfunding campaigns. His RPGs can be found through Egg Embry Publishing at DriveThruRPG (PDF) and Itch (PDF/Print).
If you enjoy the articles on EN World, please consider backing the EN World Patreon. Every dollar helps to make these articles possible.
Share:
Facebook Twitter Reddit Pinterest Tumblr WhatsApp Email Share Link
Forum list Post thread…