Simply6 is a fast, light tabletop roleplaying game for 2 or more players which you can play using just six-sided dice. I put this together over the last couple of days in my spare time (based on something I was playing with in the forums a while back) and have uploaded it to DTRPG. It's only about 20-pages long, and will likely be tweaked and updated after I get some feedback. 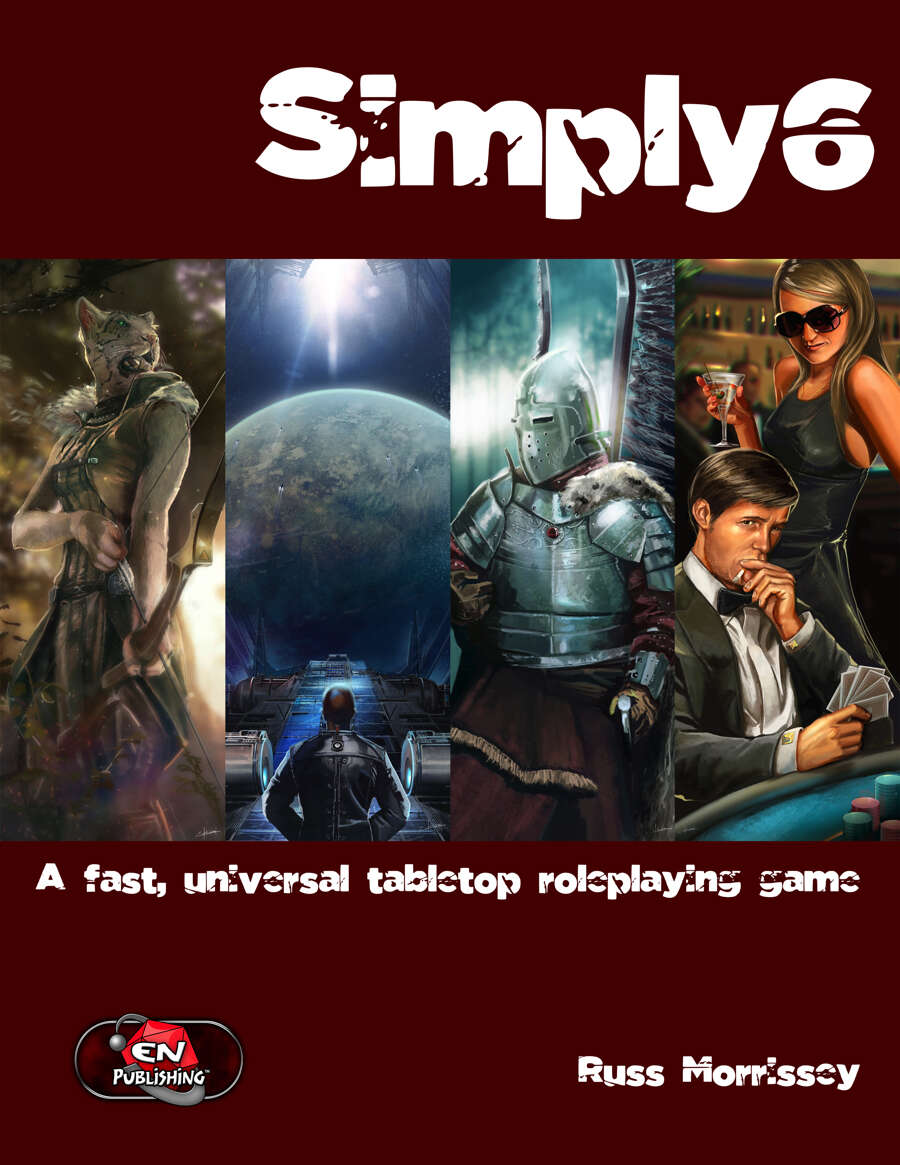 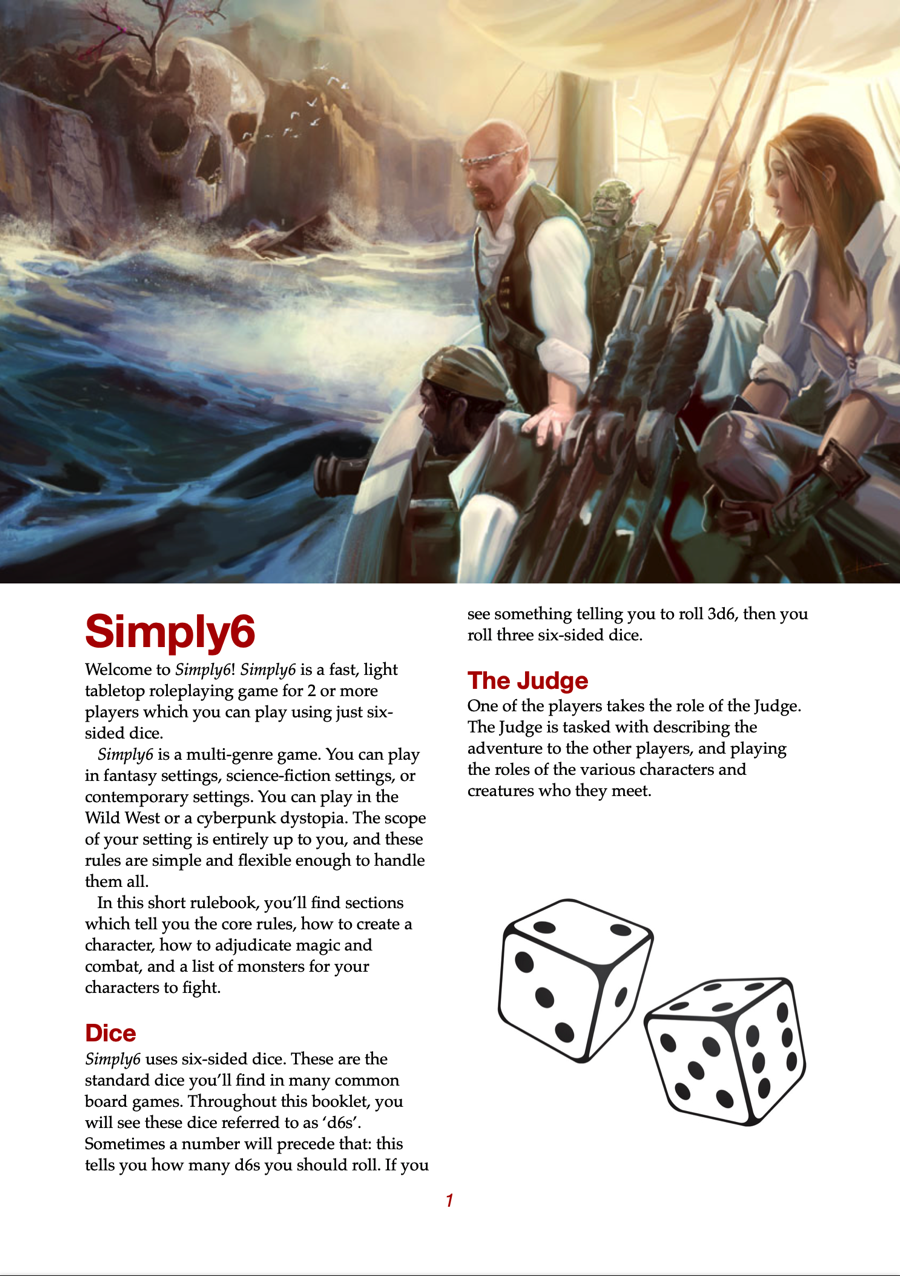 Cool. Glad for another light-handed RPG.

I bought it and will have a look. I like the name...Simply.

Can't wait for the expansions: SimplyFantasy, SimplyCyber, SimplyWestern, SimplyHorror, etc. Presumably they would just be economic systems and bestiaries. Horror might have new rules for sanity. Cyber might have rules for hacking. Etc.

I always saw the division of duties as the ‘heroes’ versus the ‘world’.

Text versus context. Foreground versus background.

Does the system have abilities, like Strength, Intelligence, or so on?

What, you weren't happy with the fast, light, universal, tabletop role-playing game that I uploaded to ENWorld? That's cool. Can't make everyone happy...

By the way, are Smileys due to be fixed? At least for Mozilla?

Purchased! I like the system overall and the ease of taking it in.

Magic seems a little costly, trading 1 health for the possibility of healing or damaging another by 1. Compared to cost-free medicine or fighting checks, seems like it would usually be the wrong choice.

Or you could have a magic focus that was consumed point by point instead of your health? Focus replenishes, you can only control a focus equal to one point per die of your magic skill?

Another job for the SimplyFantasy expansion.

Is it a FF clone?

I've done a deeper read. I like the system. In fact, I might run a PbP game in PbP forum at some point for laughs.

A mini-review and a few ideas I think the core rulebook needs:

1) I'm disappointed that monsters are allowed to buy back their disadvantages when PCs cannot. Since I agree that PCs should not be allowed to, monsters probably shouldn't be allowed to. (Of course, I see a bunch of Gambling 2d6 (7) in a lot of the monster entries. )

2) Hitting Harder should be in the mechanics section so that it is obvious that it can be generalized to other skills (especially magic effects).

4) For a supers game, and probably most magic setting, magic should perhaps (I'm not sure) be purchasable more than once. Or maybe it should be recommended that it can be purchased more than once. Not necessarily for each effect, but for effects that are similar and effects that should not be covered by the same skill.

5) There should be "cantrips". You can use your magic effect at -2 dice. When you do so, you do not lose 1 health. Or maybe there's a chance not to lose 1 health.

7) I find the placement of bluff under Persuasion but Intimidation being separate an interesting choice.

8) A note saying that some GMs might force some skills to be separate into subcategories might be a good idea.

9) Also in the core rule, a note that some rolls might use a higher or lower target number, such as a knowledge check to learn about some obscure or secret thing. Even though there is no monster opposing the check, the knowledge itself has +Nd6 because of its secret or obscure nature.

Overall, I think it's a solid system. And I can't wait for Moderately6 and Complexly6 rule compendiums.

-) That Move counts as an action and therefore you can only Move OR Attack/Cast/etc makes for very static Combat. This favors Ranged Combatants and can be very frustrating for Melee focused Characters.

-) While I love freeform Magic, this one doesn't give enough Examples/Guidelines. For example .. how much harder is it to create a Wall of Fire vs Light a Candle, Creating Undead, long time Buffs, etc.. Also it's very hard to dabble in it because it is extremly costly if you have only 1 or 2 dice in it you mostly have to pay Health without any Effect.

But overall a really nice and quick little System, which makes it also very easy to change it to your own preferences. Btw, I also really like the Formating and Art 8D

jmucchiello said:
3) There should be an area effect mechanic. Dragons have one for free. It should be possible to buy a magic effect that is always an area effect for some cost. But I get ahead of myself...
Click to expand...

I think Heroes have to split their Attack-dice between targets for Area Attacks. Which makes it very hard to effect more than 2 (and even that only if you are higher level) but I think this Rule System focuses more on low powered heroes and adventures.

jmucchiello said:
So I assume for fantasy, light armor might add +1-+2 dice to dodge. medium armor +2-+4 dice to dodge, etc.
Click to expand...

I haven't really addressed equipment yet... in the same way that all attacks do 1 damage, I wouldn't differentiate with armour. Basic equipment would just be part of your character description; the only thing that would need calling out is special items.

Morfiedev said:
Is it a FF clone?
Click to expand...

It's not a clone of anything (to my knowledge).

Baumi said:
There are two points that I don't like:

-) That Move counts as an action and therefore you can only Move OR Attack/Cast/etc makes for very static Combat. This favors Ranged Combatants and can be very frustrating for Melee focused Characters.
Click to expand...

It actually makes for surprisingly fast combat. The turn whips round in a blink!

JoshuawDavidson said:
Purchased! I like the system overall and the ease of taking it in.

Magic seems a little costly, trading 1 health for the possibility of healing or damaging another by 1. Compared to cost-free medicine or fighting checks, seems like it would usually be the wrong choice.

Or you could have a magic focus that was consumed point by point instead of your health? Focus replenishes, you can only control a focus equal to one point per die of your magic skill?
Click to expand...

I do agree, and Magic is one of the areas which I'm hoping for good feedback on.

As it stands, Magic is modeled as a "universal skill". It can sub in for Shooting, or Persuasion, or whatever. Without the cost, it just becomes a no-brainer -- there's no reason to invest in anything except Magic. And I'm against the idea of an additional resource to track, like spell points.

Originally, instead of health, your Magic score just decreased by 1d6 each time you cast a spell, and replenished at dawn. So your spells gradually got weaker until you couldn't cast any more. But that made for very limited spellcasting.

The other option is to borrow WOIN's countdown mechanic. You cast your spells, but any 6s you roll get removed from the dice pool, until you have no dice left and can no longer cast until it replenishes at dawn.

Staff member
An updated version of this title is now available. The current version is now v1.1. Changes include:

- Magic changed from health cost to a countdown pool.

- Equipment addressed in the FAQ.

You can redownload it from DTRPG. If your email settings there allow, you will have gotten an email about this too.