SKULLKICKERS: Caster Bastards and the Great Grotesque: An Interview with Jim Zub

Jim Zub of comics (Wayward, Thunderbolts, Uncanny Avengers, Pathfinder, D&D, and Champions) and tabletop fame (Dungeons & Dragons vs Rick and Morty Boxed Set and Baldur's Gate: Descent Into Avernus) is bringing back his original comic book series, Skullkickers, for a tenth anniversary story and a tabletop RPG adventure. I spoke with Jim about the Kickstarter, if the Skullkickers have D&D 5e stats in the book, what it’s like to be the go-to Dungeons & Dragons comic book writer, and how he got to roleplay with Matthew Mercer. 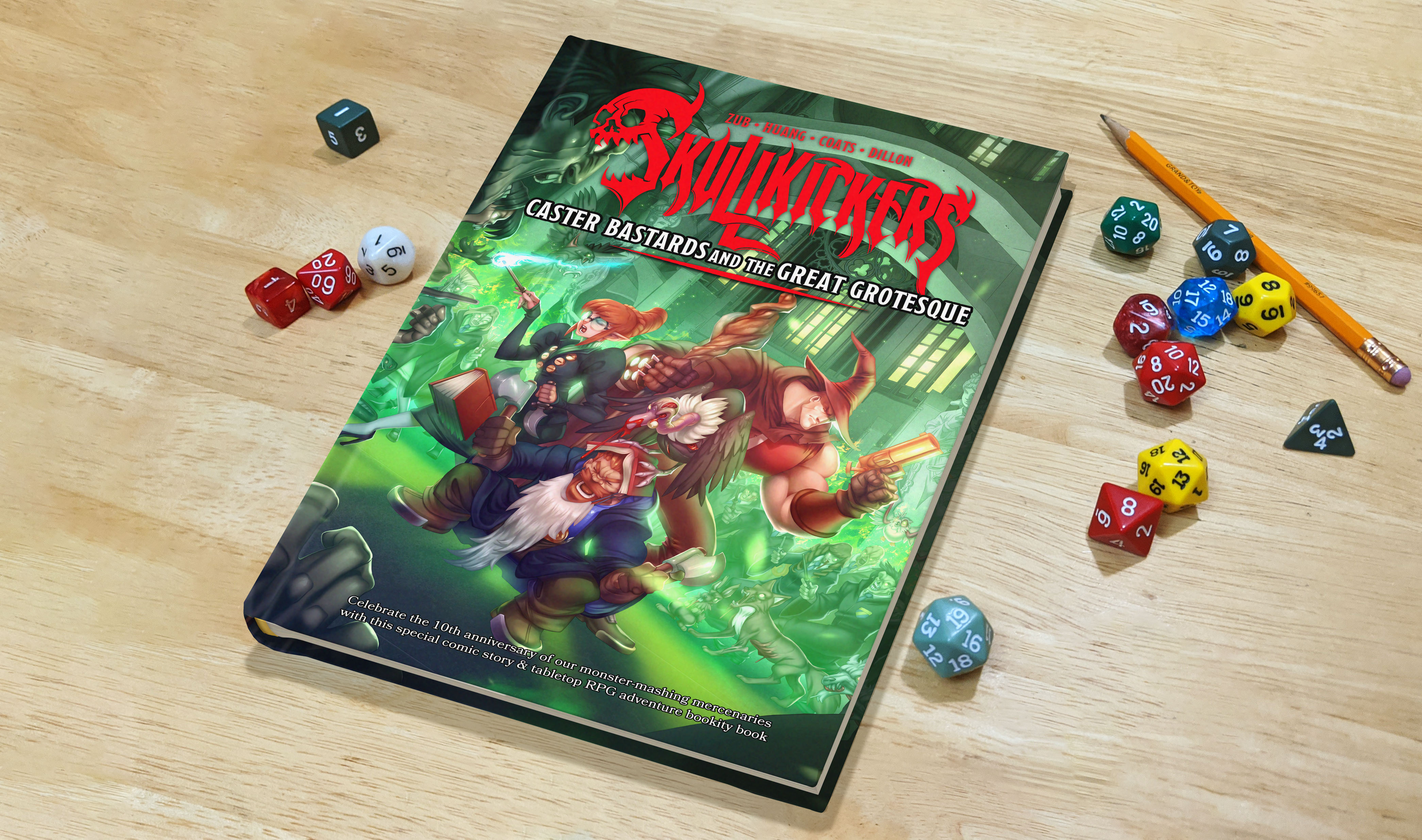 EGG EMBRY (EGG): I’m excited to talk to you about Skullkickers! You’re bringing it back and adding RPG content, which is amazingly cool! But I’m getting ahead of myself, what is SKULLKICKERS: Caster Bastards and the Great Grotesque and who is working on it?
JIM ZUB (JIM): Caster Bastards and the Great Grotesque is a brand new comic and tabletop RPG adventure celebrating 10 years of Skullkickers, the sword & sorcery action comedy series that ran at Image Comics from 2010 to 2015 and launched my career as a comic book writer. Our comic creative team is back with a brand new 30-page story – line art Edwin Huang, colorist Misty Coats, and letterer Marshall Dillon. On the gaming side of things, I’m working with RPG designers Mike Olson, E.R.F. Jordan, and Clint Cronk to create a 5e compatible adventure that brings the same merry mayhem to the gaming table that our readers expect. If you’ve read Skullkickers before you’ll be able to slip right back into it but, if you haven’t, that’s okay too! Caster Bastards is new reader friendly so it’s easy to jump into and enjoy.

EGG: Do you mind sharing your pitch for the whole Skullkickers franchise to a tabletop RPG fan that’s never read the series?
JIM: Skullkickers is a story about monster-mashing mercenaries caught in a whirlwind of gold and glory. It’s a comic that channels that frantic feeling you get at the gaming table when things are spinning out of control in the most fun and frantic way possible.

EGG: Is Caster Bastards the first Skullkickers RPG content also?
JIM: The Skullkickers have previously shown up in a Munchkin booster pack of cards and as miniatures in the Rum & Bones board game, but this is the first time they’ve rampaged across the pages of an actual tabletop RPG product.

EGG: This is a tabletop RPG adventure and that begs the question, do you get to play as THE Skullkickers?
JIM: There are stats in the book if people want to play as Rex, Rolf, or Kusia, but the adventure is also built for GMs and players to be able to run original characters in the magic tower setting for Caster Bastards. It’s a fully fleshed out arcane academy setting with tons of options for one-offs or campaign play, including a student social system, new spells, monsters, magic items and wonderfully weird encounters.

EGG: In D&D circles, you’re known for, among other things, your Dungeons & Dragons comics. When you started doing D&D comics, you already had Skullkickers rolling, did that series open the door to being offered the job of D&D comic writer?
JIM: Skullkickers was my love letter to D&D and Conan the Barbarian and it started me on a path that led to me writing officially for both those properties, which is so incredibly surreal. Skullkickers ran from 2010-2015 and in 2014 I started writing official D&D comics with Legends of Baldur’s Gate just as Fifth Edition was launching. Our fifth D&D mini-series, Infernal Tides, recently wrapped up and I’ve just started planning the sixth one with Minsc, Boo and the other Baldur’s Gate heroes. Skullkickers showed publishers that I had a good head for fantasy and could juggle an ensemble cast of characters, which turned into the opportunity to write the official Pathfinder comic series. From there I worked on Conan, Red Sonja, Munchkin, Samurai Jack, and several different superhero stories at Marvel. 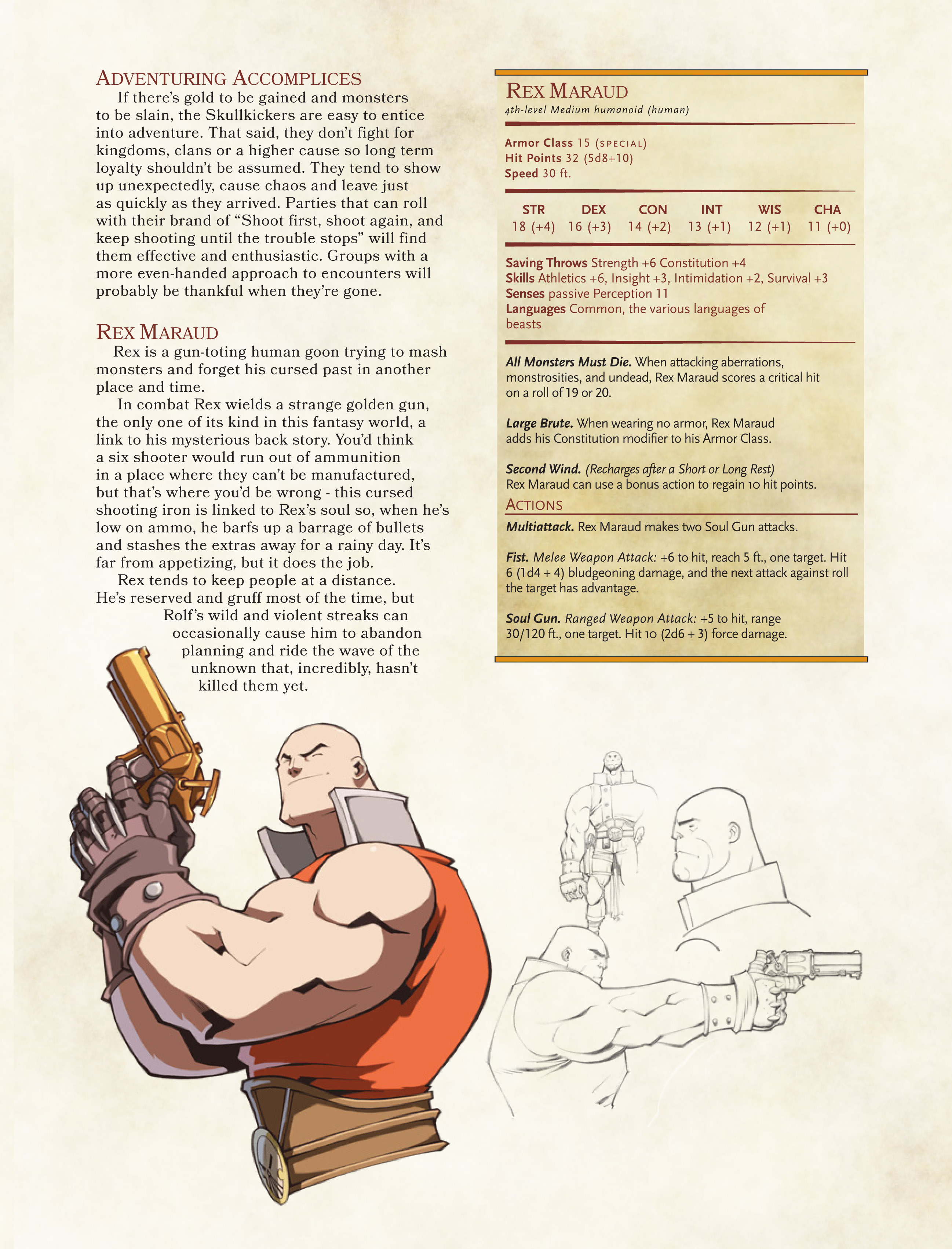 EGG: Your next series is STRANGER THINGS and DUNGEONS & DRAGONS from Dark Horse Comics and IDW. Fans of both properties wants to see this crossover. What can you share about it?
JIM: I’m co-writing Stranger Things and D&D with Jody Houser and it’s been an absolute nostalgia bomb. We’re telling the story of how the Hawkins, Indiana kids started playing D&D and their adventures in and out of game around that time. It’s a look at how fictional worlds can lead to deep and lasting bonds of friendship. I started playing D&D in the same era as the Stranger Things kids, so it’s been a wonderful way to look back at how I started playing the game and what it meant to me. It’s the same fuel I used for my TED Talk last year about how D&D boosted my creativity and confidence.

EGG: This isn’t your first foray into “D&D AND…” territory. How did you become attached to Rick and Morty vs. Dungeons & Dragons?
JIM: I’d been writing the D&D comic series for several years when my editor at IDW approached me about a strange crossover idea they’d come up with in-house. They wanted to know if I had any ideas on how to fuse Rick and Morty and D&D together. I told them I was excited to see it happen but wondered how they’d be able to navigate all the licensing involved at both Hasbro and Adult Swim. It took 8-9 months to get negotiated, but when things finally got worked out Pat Rothfuss (the Kingkiller Chronicle) was also on board and we co-wrote the first mini-series together, with the amazing Troy Little and Leonardo Ito channeling our madness on to the page. The mini-series did incredibly well and has since led to a sequel mini-series called Painscape I solo wrote as well as a D&D VS Rick and Morty game box adventure put out by WotC that I also contributed to. It was a wild and wonderful experience.

EGG: Let’s talk about your streamed D&D game where you play with other authors. Who is on that and what sparked the idea you’d all play online?
JIM: I’ve been playing quite a few online tabletop RPGs with friends since the pandemic started and the press team at Ten Speed (who publish the D&D Young Adventurer’s Guides I also work on) had seen some of the games and thought it would be fun to pull together some of their Young Adult fantasy authors into a short game. Some of the authors are long time gamers and some of them had never played before, so it was a nice cross section of experience at our virtual table. I’m hoping it does well and there’s interest to continue either with the same group or to bring in other writers to play future adventures together. It’s a fun bonding experience.

EGG: Last year, you were able to cosplay as your D&D comic character as you played D&D with Critical Role’s Matthew Mercer. How did that game come together and at what point did you decide to go all-in and role-cosplay?
JIM: I was invited to be part of the D&D Live event in Los Angeles to promote the D&D comics and Descent Into Avernus, which I did some creative consulting on. I mentioned to the organizers that I’d be up for playing in a session if there was space and interest in having me aboard. Chris Perkins was the one who ran with it and suggested I play Minsc, with Matt Mercer as Boo the miniature giant space hamster. I couldn’t believe it when he pitched it and Matt instantly agreed. Matt and I had sent some messages back and forth but had never met before and now I was going to be playing on stage along with an all-star cast of stream players like Anna Prosser and Deborah Ann Woll. It was so crazy. I knew I had to really give it my all and so, when the idea came up around shaving my head and getting make-up done to really embody Minsc I decided to just go for it. It was incredible. One of the best gaming or convention experiences I’ve ever had.

EGG: That sounds awesome! Skullkickers is being developed as a 2D animated series, correct? Any updates you can share on that? Will you be writing scripts for it?
JIM: Yes! An animation studio called Copernicus, probably best known for their work on Teen Titans Go, reached out and we’ve been working away on development throughout the year. I’ve been helping build the story documentation, looking at designs, and have written the pilot script. It’s amazing being able to go back to the original comic material and see it all so much more clearly. We’re adapting the comic stories, but also fleshing it out since we have the whole story laid out in front of us to build from. It’s been a very Skullkickers-centric year.

EGG: It’s is, and that’s something positive in 2020. Your co-creator and artist on Wayward, as well as the artist on your Champions run at Marvel Comics, Steven Cummings, roleplays with me on Saturday nights (Sunday mornings for him in Japan). For his part in RPGs, Steven has been doing drawing for Palladium, Robotech, and other projects. I’d be remiss if I didn’t ask if there’s anything on the horizon for Wayward, or another project by you and Steven?
JIM: The Wayward board game designed by Jon Gilmour (Dead of Winter, Kids on Bikes) was released last year by IDW Games exclusively through Barnes & Noble and I think will be getting a regular game store edition at some point as well. Steven and I have had a few near misses on getting Wayward adapted into animation or other mediums. At any particular point my agent mentions to me that companies are interested or different possibilities that might pop up but I’ve learned not to expect anything until a contract comes through. That said, it would be great to build something new with Steven at some point. We stay in touch and I’m always amazed to see the latest stuff he’s working on.

EGG: Thank you talking with me. For fans looking to follow you, where can they learn more about you and this Kickstarter?
JIM: The Kickstarter campaign page is right here. And if people want to check out more of my work, the easiest place to find me and links to everything I do is at [my website].

SKULLKICKERS: Caster Bastards and the Great Grotesque from Jim Zub
Egg Embry participates in the OneBookShelf Affiliate Program and is an Amazon Associate. These programs provide advertising fees by linking to DriveThruRPG and Amazon.
Click to expand...