Steal From The Vampires And Give To The Poor In Brinkwood 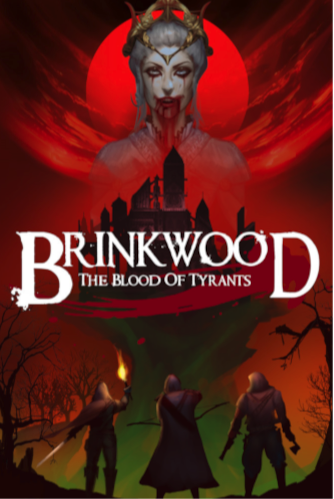 In screenwriting, the “elevator pitch” boils down an idea to the barest essentials. The practical idea is to focus a story on its strongest concept. It gets its name from the idea that if a creator is ever riding in an elevator with a Hollywood executive, they can turn to the executive, give the one line pitch, and intrigue the power broker long enough to get a meeting. Elevator pitches can be useful for Game Masters, too, in helping to sell groups on trying out new games. Brinkwood: The Blood of Tyrants has one of the punchiest elevator pitches I’ve seen for a while: Robin Hood Vs. Dracula. Designer Erik Bernhart sent a review copy for me to check out. Is this game a blockbuster or a direct-to-video schlockfest? Let’s find out together.

Brinkwood: The Blood of Tyrants is set in Cardenfell, one of the most important counties in the Crimson Empire. The nobility have discovered an alchemical process using blood and silver that grants them immortality and all the powers of the vampire whenever they drink the concoction. The vampire lord in Cardenfell is one of the most powerful and terrible of the bunch. The only thing standing in the way of timeless, oppressive rule is a band of brigands striking from the ancient forest of the Brinkwood. With the help of enchanted masks, the players strike at the vampires, organize the resistance and hopefully bring the dread lord to meet one final sunrise.

This Forged In the Dark game lets players build out their version of Brinkwood. Session zero also included a discussion of safety tools, because hunting vampires is nasty work, and three Vampire Lord to choose as the main villain. Each one leans into some delicious tropes such as the Duke’s oppressive industrial network or the Countess and her decadent blood masquerades. The players also build their faerie patron in the Brinkwood to further focus the campaign in the direction everyone wants it to go.

I must admit, when I first read about the faerie patron I deflated a little. The elevator pitch had me excited for a hardscrabble battle between crafty outlaws and powerful creatures of the night. The patron offers enchanted masks for the players to use that fill the role element of other Blades-style games. After reading them, it put the theme back on track for me, because the masks allow each player to build a Zorro style legend. They also can be worn by different characters for different missions. Rather than being stuck in the same role every session, choosing the right masks that fit the plan becomes part of the in-game planning.

The play structure is familiar. Players figure out something they want to do, the group jumps to the engagement point, the job plays out and then downtime occurs to let the outlaws reap the rewards, resist the consequences of their actions and spin off more opportunities for action. The game changes a few things to better fit the mold of the game. In addition to the engagement roll, tables can use the disengagement roll to see how clean their getaway is. This is a great addition for a game about brigands running hit and fade ambushes but it also would be a great fit for regular Blades games as well.

While Blades downtime tends to be about action and reaction that can come from unexpected areas, the Brinkwood outlaws are the main focus in the story. You hit the vampires and they hit back. Instead of building a criminal empire, the organization is a rebellion full of people grateful for the help and shifty allies that might turn on the characters if offered enough silvered blood. Each vampire lord features servants of different tiers that come directly at the outlaws, but there’s also an array of other minor vampires that might be played against each other for those groups who want to get into intrigues rather than pure vampire slaying action.

Brinkwood: The Blood of Tyrants is a great riff on Blades in the Dark, perfect for groups that want a more heroic bent than the base game or who want more vampire slaying action after completing Curse of Strahd.
Click to expand...

I snagged a copy based on the premise and it's quite cool. My only petty annoyance: I got PoD and the cover is slightly offcenter and it drives me nuts.

Is this a standalone game, or part of a bigger line?

Also, where do I buy this?

Le Noir Faineant said:
Is this a standalone game, or part of a bigger line?

Also, where do I buy this?


You can get it at Indie Press Revolution or Drivethrurpg.

I believe that there are a pair of follow up supplements called Refuge and Despair. I’m not exactly sure what those will include.

Well, making the 1% into literal bloodsuckers feels like a natural step really.

robowieland said:
In screenwriting, the “elevator pitch” boils down an idea to the barest essentials. The practical idea is to focus a story on its strongest concept. It gets its name from the idea that if a creator is ever riding in an elevator with a Hollywood executive, they can turn to the executive, give the one line pitch, and intrigue the power broker long enough to get a meeting.
Click to expand...

Screenwriters may have also adopted the term, but I don't believe it originated in Hollywood. (Does Hollywood even have tall buildings?)

I like this because it could be made into a more open/less franchise-dependent version of "Vampire Hunter D".
Definitely on my "Do Want" list of games - even though I'm not entirely sure what I'm buying with the core book here, yet.

For Ravenloft games, I'd probably stick to the original. For "Vampire Hunter D"-style games, there are cheaper options.
Still so, this, probably a bit more rounded out by one or two good supplements, a safe purchase for me.

News Digest for the Week of March 25