Taking Nominees for Most Anticipated RPG of 2018

As we do every year, I'm taking nominees for the big public poll. A game will only be in the big poll if it is nominated here. What's your most anticipated RPG of 2018? Rules - as always - it must be a standalone RPG. NOT a supplement, adventure, sourcebook, expansion, or accessory. It must be scheduled for release in 2018. If they were coming out in 2018, Dungeons & Dragons would count; Xanathar's Guide would not. Taking nominations for one week. Post your nomination as a reply below.
Please don't nominate your own game or one you’re affiliated with. 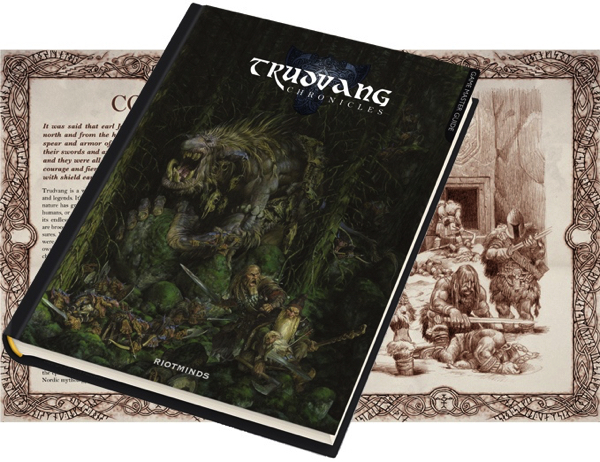 Last year's winner was Trudvang Chronicles from RiotMinds (pictured above). You can see last year's top 10 here. The previous year it was Rifts for Savage Worlds. And yes, Conan appeared three years running.


Delta Green is (partly) out. A friend of mine got his physical copy of the player's book last week and he wasn't a Kickstarter backer.

And, if FFG doesn't get it off the boat soon, the reprint of WEG Star Wars d6...

Morrus said:
As we do every year, I'm taking nominees for the big public poll. A game will only be in the big poll if it is nominated here. What's your most anticipated RPG of 2018?
Click to expand...

Should be an easy win for Warhammer Fantasy Role-Play.

So many new versions of old games in this thread. In fact, so many new editions seem to be scheduled for next year, that it might be more interesting if you do two separate polls: one for truly brand new games due out in 2018 and one for updated versions of already existing games. While new editions are cool and all, it would be a shame if they drowned out the truly new stuff. After all, if Trudvang were do out next year instead of releasing this year, it would have need lost in all the excitement for the new versions of Top Secret and WFRP.

For my vote, I would have said Esper Genesis, since the rules are self-contained and do not require any of the 5E books to run, but it looks like it is still scheduled to start shipping out copies in December, so it would not qualify as a 2018 product.

A lot of the stuff that I have been looking forward to has already come out, among the remaining the top three are:

I was previously excited about KULT, but with the repeated delay the anticipation has faded quite a bit.

* I see that it was nominated for 2016, so not sure if that's valid, but according to the Kickstarter it should come out next year.

AngusA said:
Flash Gordon is a setting and not a complete game, so isn't valid according to the guidelines. I'm looking forward to that too
Click to expand...

I love the narrative play mechanics and the character progression mechanics using specializations that allow you mix-match/dabble wherever the story takes you.


It's out. My FLGS has my copy behind the counter.

Edit: picked it up this afternoon.
Last edited by a moderator: Dec 2, 2017

Gotta be these two for me.

Got to go with Torg eternity. I have the pdf from kickstarter but it's not looking to be out proper until febuary.

Runequest - whatever the full title of the new 7th edition is called.


But, but, I want my 2 volume slipcased hardcover editions!

You guys seem to be forgetting that Scratchpad Publishing's DUSK CITY OUTLAWS is due roughly February 2018! I had the chance to run the game a two or three times with the prereleased rules (as in, during the KS campaign, but before the game's official launch), and it runs like a river. I recommend it for anyone who needs to host a game in short notice, or who finds being a DM as incredibly difficult. Insanely creative, dynamic, easy to learn, and the players keep asking for more!