Okay, I'm sorry if the name is a bit vague. In case you hadn't noticed, the art for depicting drow in Tasha's Cauldron of Everything is very different in a significant way from all other 5e art of Drow. Take a look and see if you can spot the difference. For reference, I will start with some Drow art from the PHB, MM, and Mordenkainen's Tome of Foes. 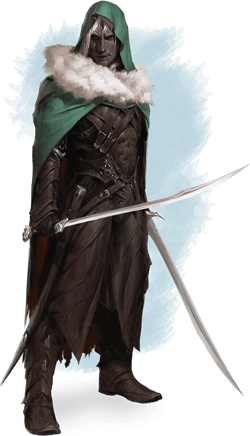 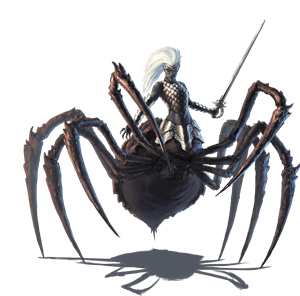 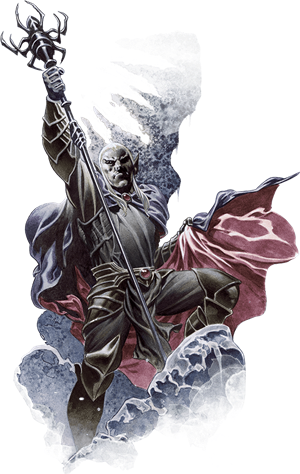 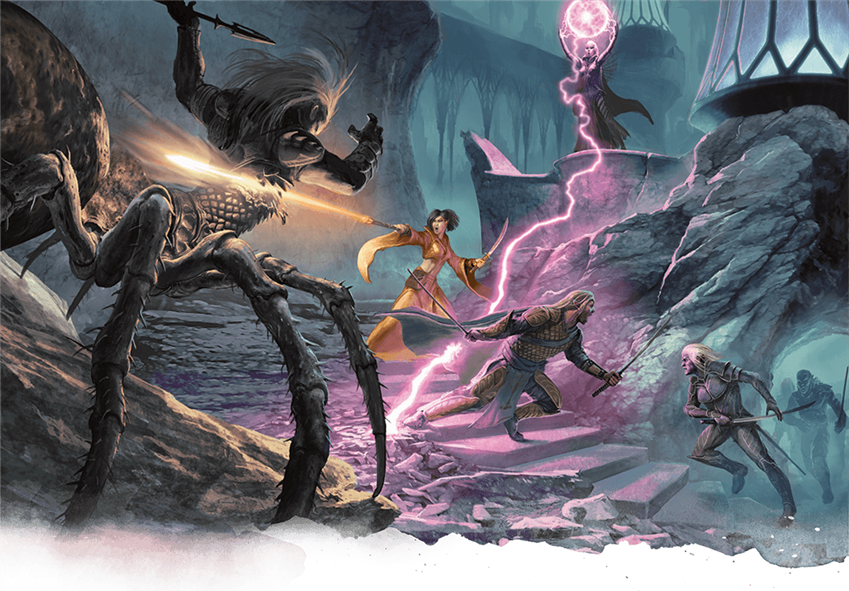 (Drider on the left, Drow on the top center and in the bottom right corner.) 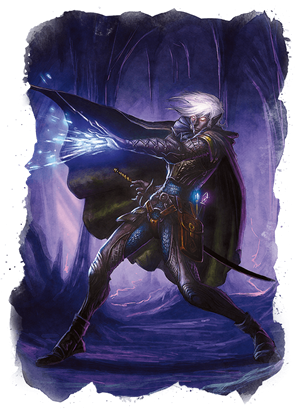 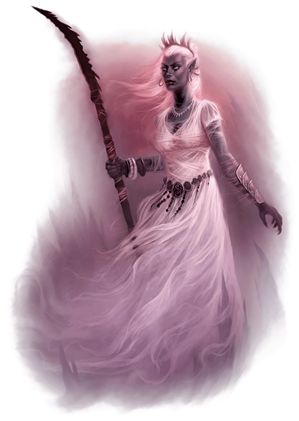 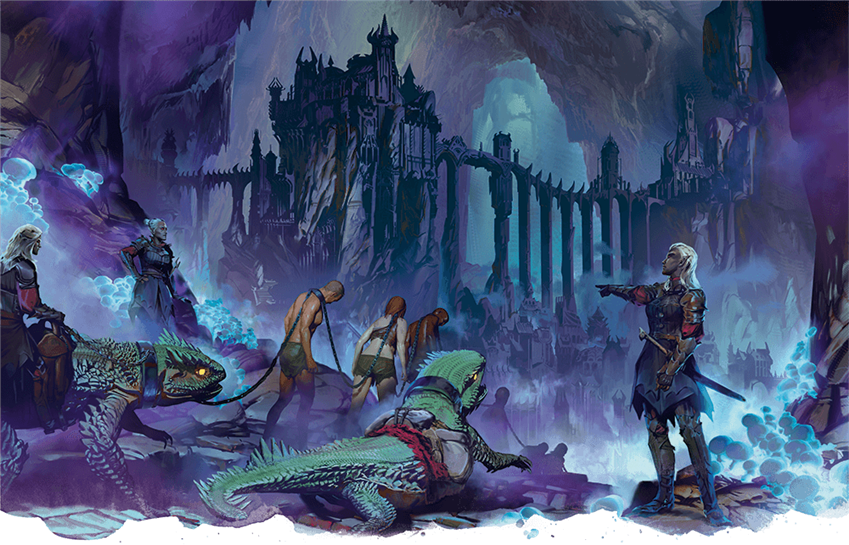 Now, let's look at the art from Tasha's that depicts drow (which there are actually a surprising amount of). You should be able to easily spot the difference (and keep in mind, this is all of the Drow art in Tasha's. I'm not hiding any outliers of this example. The fact that it's so prevalent leads me to believe that this was a coordinated decision instead of just artists doing their own take on the race.) 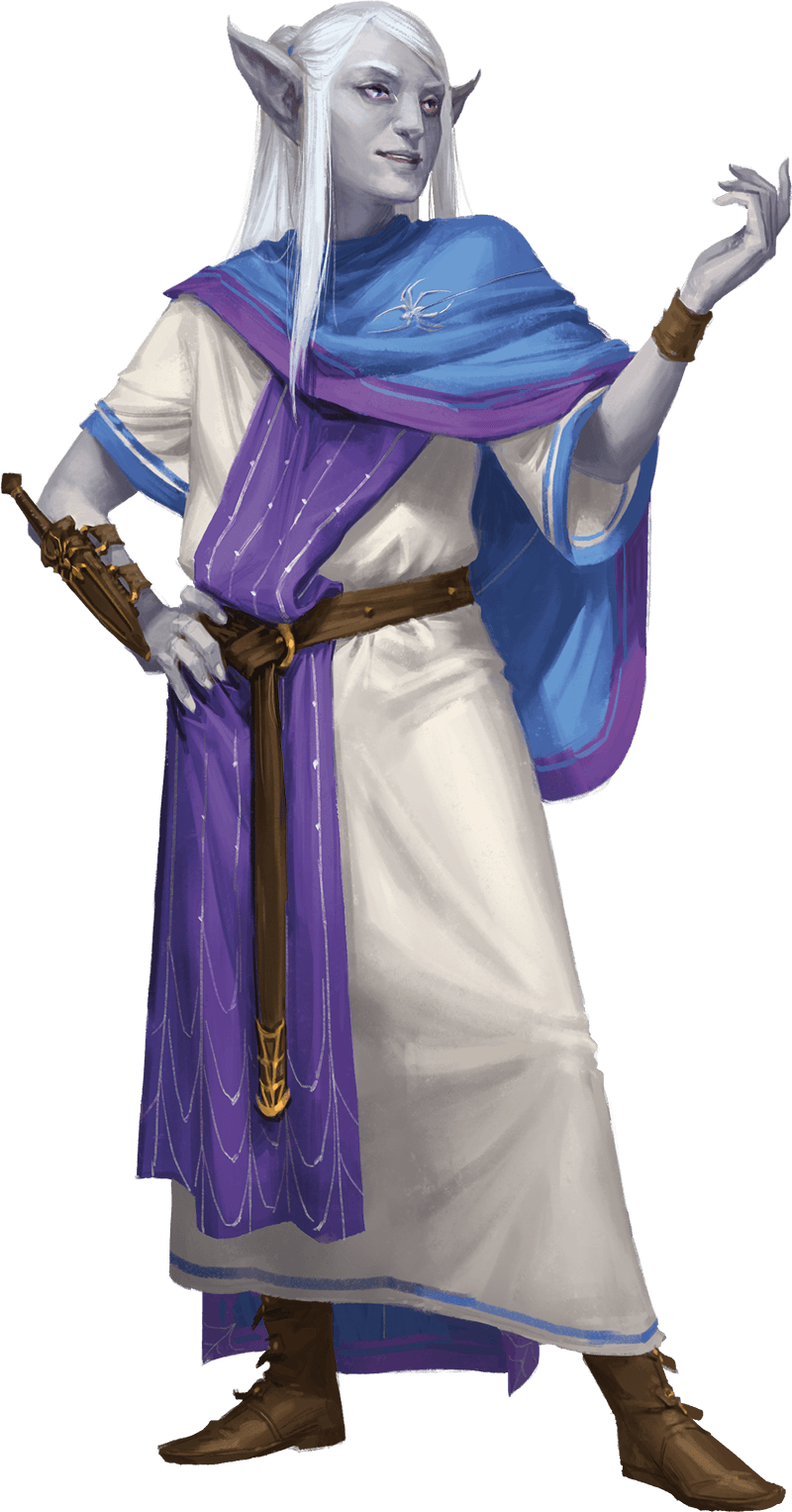 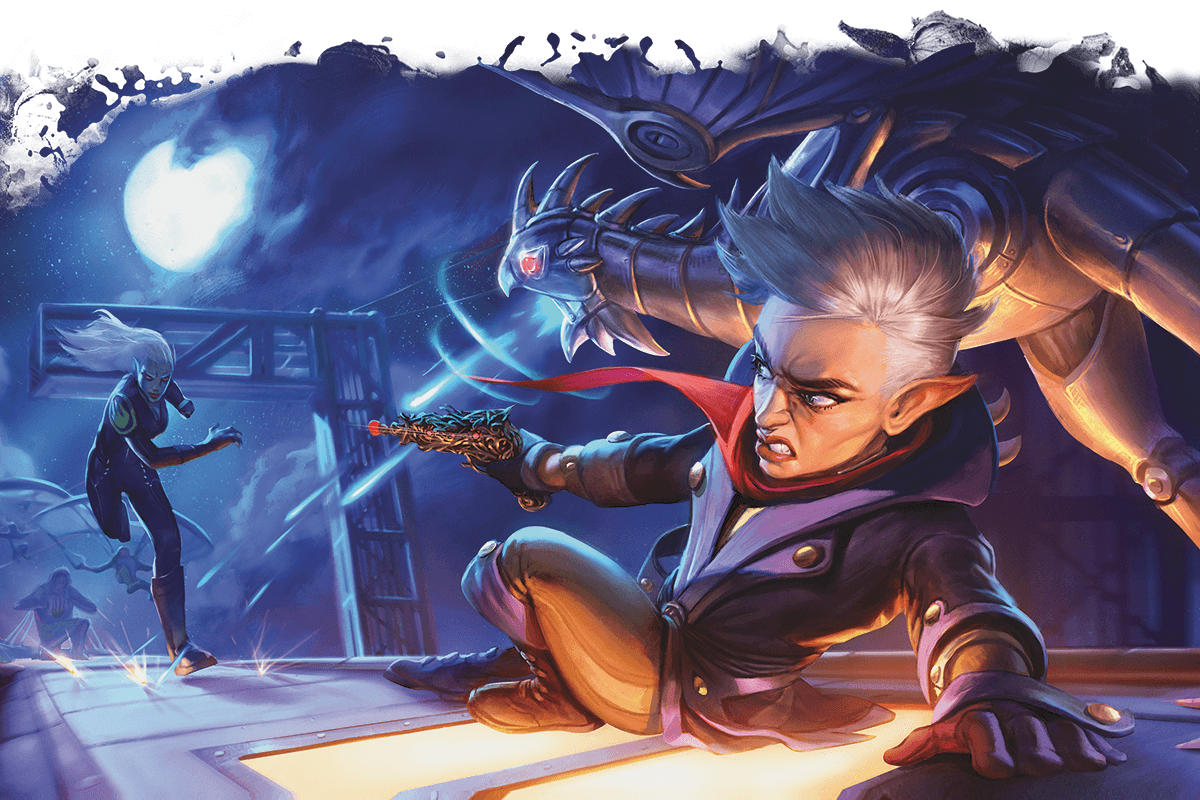 Drow on the left, running towards Vi (the gnome). 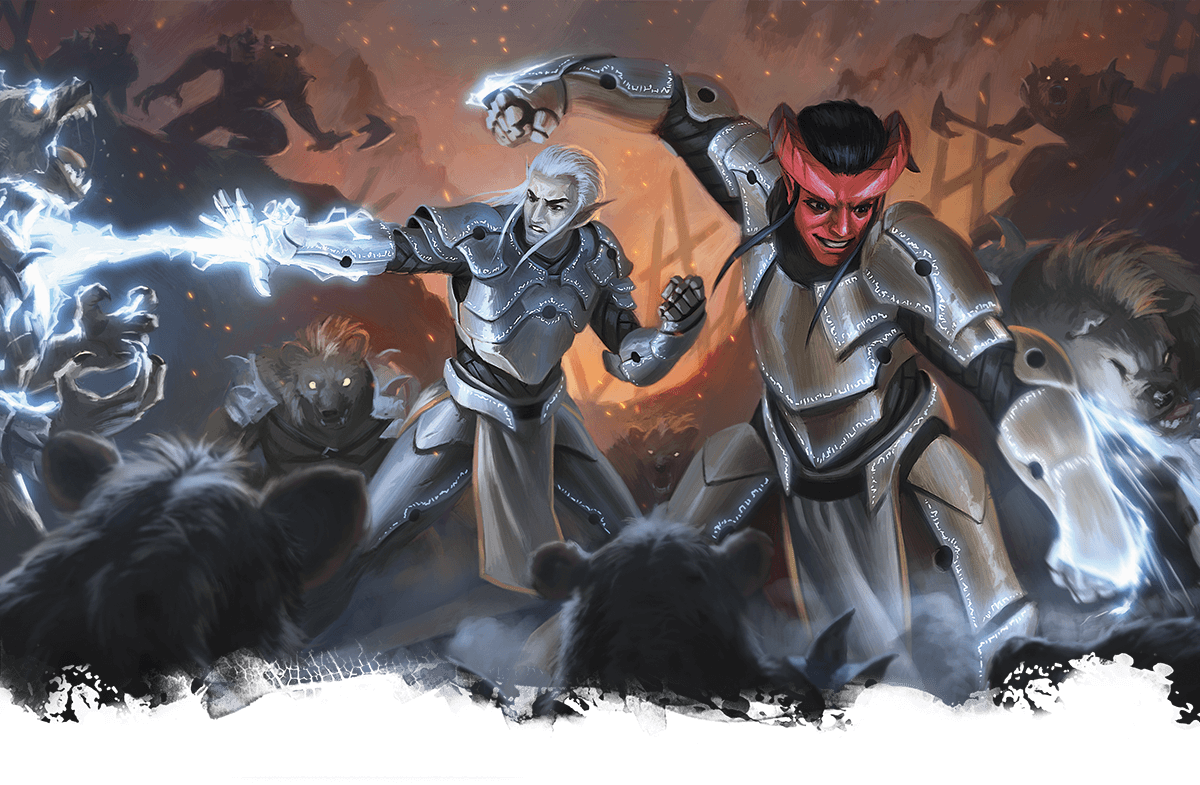 Drow on the left (though I think that's pretty obvious). 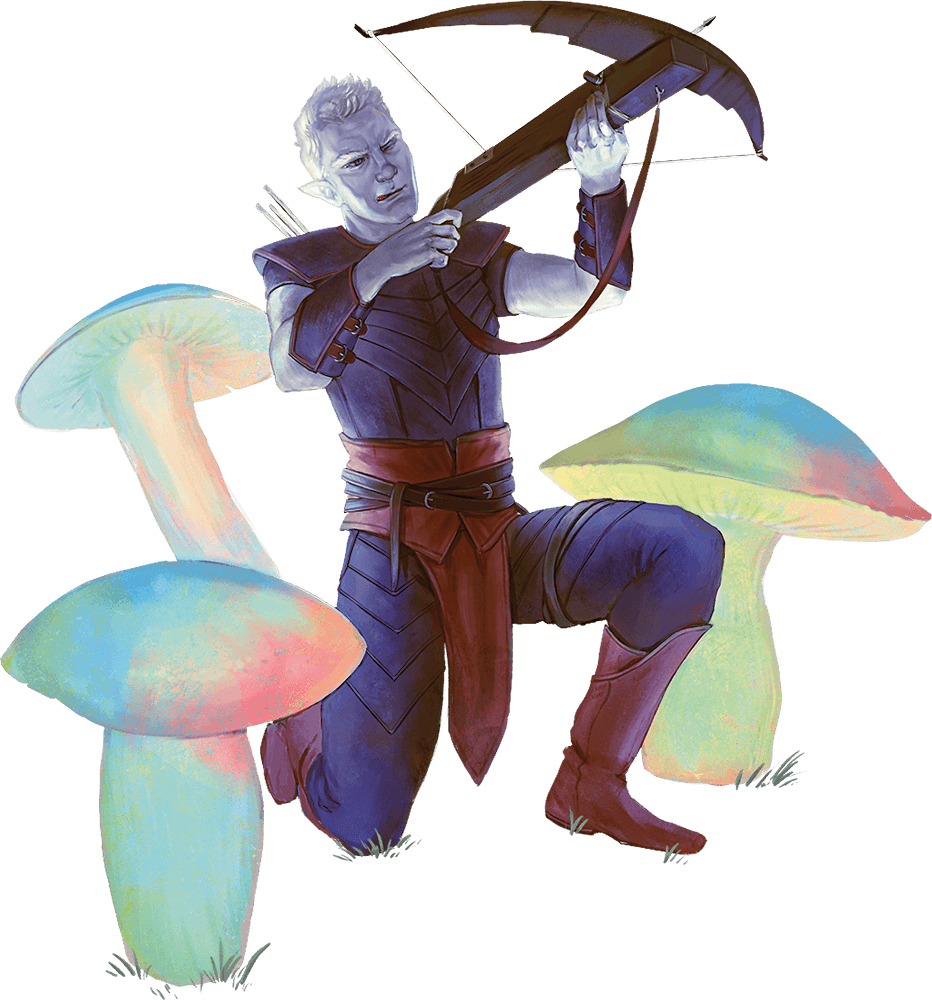 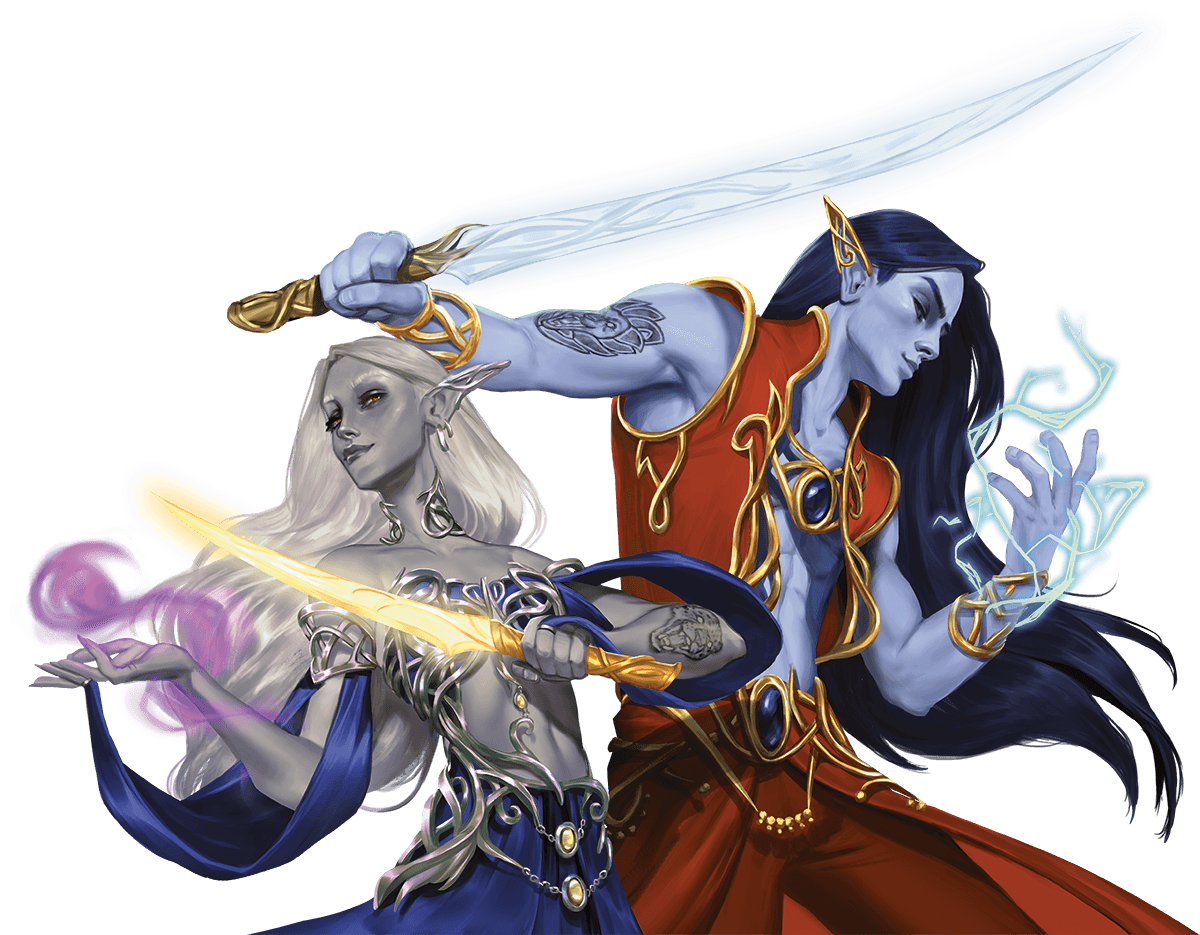 Drow on the left.


So, in case you need me to spell it out for you, the skin color appears to have changed. The clearest depictions of this are the 1st, 3rd, and 4th images here, where their skin is a silvery-gray color (the fourth one looks white from the lighting). The 2nd image has poor lighting that makes the drow (the figure on the left running towards Vi) look blue, along with part of Vi's (the gnome) face and body. The 5th image has a shiny light gray skin tone that is noticeably darker than most of the other depictions in TCoE, but is still much lighter in skin tone than any official 5e pre-Tasha's depiction of Drow.

And before people say it, yes, I know that Drow had varieties of skin tones in previous editions. However, this is new to 5e. The 5e PHB even describes drow as having "skin that resembles charcoal or obsidian". I don't know about you, but none of these Tasha's Drow have a skin tone anywhere near charcoal or obsidian. Drizzt does have charcoal-colored skin, as do the other Drow from the MM and MToF. The last 5 Drow don't.

So, this has led me to believe that the Drow from Tasha's Cauldron of Everything are likely the way we will see Drow depicted in official 5e art in the future. Silvery-Gray skin. And I'm not complaining. I think that this art looks quite cool, and silvery-gray races are easier to draw than charcoal/obsidian-black ones. I know that a lot of people will complain about this change, but I think that this is overall a positive change to the hobby, detaching the previous connection of "dark skin" with "inherently evil" (also, I am not saying if this connection was intended and am not accusing anyone of racism. Whether or not it is intentional, it is negative to have the perception of having dark skinned races be the bad ones).

So, let's discuss. Do you think that this is likely to be a change that we'll see in the future, and if so, what are your thoughts on it?

IMPORTANT: I will also point you to the site rules in order for you to refresh what is and what isn't proper behavior on this site. This is a sensitive topic, and I want this thread to be as constructive and inclusive as possible. No whining about the direction of D&D, "cancel culture", or the like. It will not be tolerated and will be reported as off topic, as such posting is non-constructive and bait. You have been warned.

I would have preferred if they let the charcoal skin and removed the ''inherently evil part''. I use the Dunmers from Elder Scrolls as a reference, with the uber-fanatic, faith-driven, evil hierarchy-worshipping drows are mainly ''a thing'' in the large, established cities rules by the Houses under Lolth and the rest of the drows in the Underdark are living like the Ashlanders, living semi-nomadic lives in the endless sprawls, worshipping ancestors and that kinda stuff.

So yeah, think D&D would be better to invest some time doing something interesting a more complex than ''all of those are evil because Lolth'' with the drow societies (and many other ''evil humanoids'' groups) instead of a basic reskin. Saying ''in FR, drows are mostly evil, but that's okay 'cause they now have a new skin color'' is kinda missing the points.

I mean - the Drow always felt like they took a lot of cues from the Melnibonians, so the shift makes sense. Also, a branch of elves that were predominantly underground and had serious problems with sunlight would probably also have a melanin problem, so this feels like the right move for me.

I hadn’t noticed this, but you’re absolutely right. I wouldn’t be at all surprised if this is a conscious change in art direction. My drow have been albino-pale for years now, so I definitely approve of this change, as it brings the depiction in the books much closer to the way I describe them.

vincegetorix said:
I would have preferred if they let the charcoal skin and removed the ''inherently evil part''.
Click to expand...

Why not both? Or, I guess neither, depending on how you look at it. Skin a color other than charcoal and a full range of possible alignments.

The new art is just bad because it looks flat, lacks contrast and some of them look over exposed, washed out, and they didn't even bother with a backgound. WotC's art department just needs to do better. I've seen miniatures that are better painted. Dark skin is beautiful and they shouldn't try to remove it from the game.

tommybahama said:
The new art is just bad because it looks flat, lacks contrast and some of them look over exposed, washed out, and they didn't even bother with a backgound.
Click to expand... 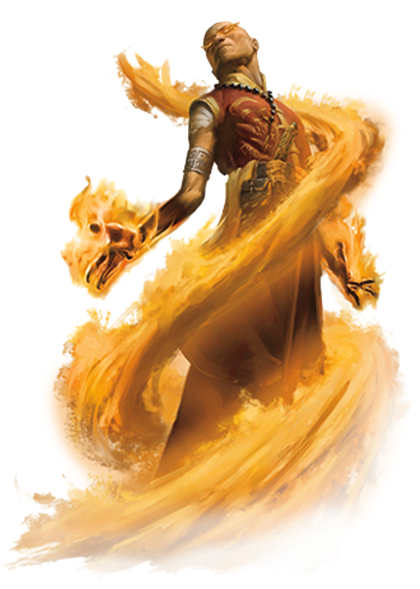 Or this Kobold from the Monster Manual. 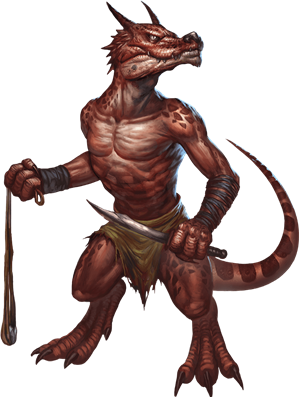 Lots of art throughout 5e has been lacking backgrounds. IMO, it often helps give me a clearer image of the character. Also, two of the images of drow that I shared from TCoE in the first post did have backgrounds . . . so I'm not even sure what you're trying to say here.

tommybahama said:
WotC's art department just needs to do better. I've seen miniatures that are better painted. Dark skin is beautiful and they shouldn't try to remove it from the game.
Click to expand...

. . . But having one of the main evil races from one of the biggest (if not the biggest) setting in D&D be dark-skinned is inherently problematic. The problem is less of a problem if they make them have more nuance and be less black-and-white morally and also have a lighter skin tone. This also helps for LARPing, as dressing up as black-skinned drow is pretty taboo, but no one will take offense by silvery-grey skinned drow costumes.

Considering humans have a large variety of skin tones, there's no reason why any of the demi-humans races wouldn't also. So there should be dark-skinned wood elves, and light-skinned drow elves, just like there should be snirfneblin with white skin, grey skin, dark grey skin, purplish-grey skin, etc.

i like the change. Really if they have been living underground for centuries, white, albino or translucent makes more sense but grayish silver works.

I'm open to other arguments, but to me it seems like "nearly every person in this culture is evil" is the bigger problem than "there is a group of subterranean elves with dark skin."

I think about the cruelest, most evil societies in modern history, and even they had plenty of people trying to resist the power structures of the villains in charge, with most of the everyday citizens being force-fed lies and propaganda and being threatened with prison or death if they question the official line.

If WotC wants to do it, hey, it doesn't really bother me. It's not the answer I would've gone with, but I suppose it's less effort than removing all conceits of racism from a game that has a tradition of sorting morality by color.

Not a fan of the new look aesthetically, but I get why they did it.

I know that some people will dislike this interpretation, but it made me very happy when i saw it. The players I have right now are all young and first-time D&Ders, and they love drow pictures like these. None of them would even look at the old drow as possible player characters, but this was instantly very popular.

Now, there would have been a time when this would have made me very angry. They changed an integral part of D&D that defined its identity etc. gnargl gnargl fistshake grumble grumble.

But these days, I smile when something is approachable and popular. Good for my players. Good for me.

Count_Zero said:
...Also, a branch of elves that were predominantly underground and had serious problems with sunlight would probably also have a melanin problem, so this feels like the right move for me.
Click to expand...

I always thought a paler more proper subterranean look was the way to go.

Not for any alleged “problematic” reasons. ( I reject the underlying premise of those arguments.)

But because it was stupid.

Stuff that lives in caves with no natural sunlight has less skin pigmentation, not more. That idiotic charcoal skin tone was immersion breaking and lacks verisimilitude.

How long before they appropriate the Shadow Elves, from Mystara, I wonder?

Charlaquin said:
Why not both? Or, I guess neither, depending on how you look at it. Skin a color other than charcoal and a full range of possible alignments.
Click to expand...

Yeah, I would agree. Its just that to me, the ''first step'' was the wrong one. Like, its only an esthetic change that dont changes much to tackle the deeper problems of an ''always evil race''.

Its like if they kept orcs as savage rampaging brutes with evil blood, doing evil stuff because its in their genetic, but made them pale blue with better teeth.

And knowing WotC is quite slow to make those steps, there's always a creeping fear in me that those esthetic changes will be the extent of their ''effort''.

Another reason for the change: Potential for cosplay.

The drow culture is evil when it’s centered around the worship of a demon queen, not when they have dark skin.

The whole think was whack fantasy from the start. They were kissed with dark skin because they were cursed to live in the dark. In the real world, subterranean creatures would be the whitest, with those regularly in the sun being the darkest, because the sun tans skin.

I find the current narrative intellectually dishonest and timid.

In my campaign world I justified drow black skin/white hair as camouflage for the underdark where pretty much everything has darkvision. White/albino would stand out if you can see black and white. Their hair is like polar bears, it's actually hollow and only looks white in the sun.

As far as the new artwork I have no problem with the skin color. It's difficult to give much depth to solid black and this looks less human (same reason I like green orcs for that matter). I kind of hate the giant dog ears, but that's a different issue.

D&D 5E Some thoughts on the Art in Tasha's Cauldron