It's definitely occurred to me the that Crodlu that's often used as a mount in Athas, because either Horses are were exterminated by Rajaat and his champions or just never existed in Athas, really is the Chocobo that's featured in the various Final Fantasy games.

Sure the Crodlu is often shown as being featherless, but it's basically a bipedal Dinosaur that one can ride on. And there's plenty of evidence that Dinosaurs of certain periods did have a bunch more feathers than previously thought of. So there really are certainly similarities between a Dinosaur like that and an Ostrich-like creature. 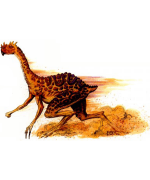 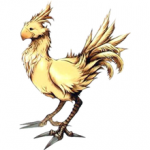 A lot of it has to do with Dinosaurs having feathers. A bipedal Dinosaur is the ancestor of a large flightless bird, and they both have more in common than previously thought.

But in those examples of the art, it comes down to style. Some art of the Crodlu does show them with shorter arms. And it's entirely likely that if they are on worlds other than Athas they'd be even more feathered.