Hiromi pulled her short bow and returned fire, then ducked behind some crates. Her arrow passed harmlessly over Hallod's shoulder.

Hiromi was wise to Hallod's tricks. As she moved to find a crate to duck behind, she kept an eye out for trouble.

OOC: Yeah, that's high enough. She sees what is in the spoiler text for the Perception check and can easily avoid it.

As Hiromi pushed forward, she spotted a trip rope, "Yikes!" she said, "Watch out, everyone, Hallod's up to his old tricks as usual!"

She hopped over the trip line, vaulted over a crate, and came down low between the two rows of objects.

Unsure what Hallod’s usual tricks are but cautious to a fault, Mortimer ducks behind a crate.

”What? Where?” he hisses at Hiromi.

Then, louder, he addresses their foe.

”Hallod, please surrender. You are outnumbered and your ruse is done. Even if you somehow defeat us, the sheriff will know what you’ve done and you know he won’t care about your no doubt good reasons. Give up now and we may figure out a solution for all of us.”

"Much obliged." Grimsby thanks Silvi before turning to their foe.
Hallod's challenge provoked Grimsby to do the same. The dwarf's body seemingly growing to match the growth from the potion. With sudden ferocity, he charges forward, triggering one trap, but avoiding the second. At the end of the charge, the barbarian brings his hammer down.

"Well, there was that one," Hiromi answered Mortimer after Grimsby forced his way through the first trip-rope.

Pak squawks as the bolt bounces past him. He raises his hands and speaks in his native tongue using his magic to cloud Hallod's mind and perhaps even stun him. He moves, trying to close the distance and engage their adversary in close combat. He deftly leaps the first rope and continues moving. He notes the second trigger and prepares to jump it as he closes.

Hallod dodged Hiromi’s crossbow bolt and ignored Mortimer’s pleas to turn himself in. “The sheriff is a joke!” he said, pulling another bolt from the case at his hip.

Grimsby rushed forward. His foot caught on a rope that set off a spear trap like the one they had first encountered when entering the house. The spear slammed into Grimsby (13 piercing damage), though the dwarf continued to barrel up to Hallod, swinging his maul and striking Hallod solidly.

Pak cast a spell at the man, but Hallod laughed and brushed it off (he crit saved with a natural 20), dropping the crossbow and drawing his kukri, then viciously attacked Grimsby, first slashing the dwarf with his kukri (9 slashing damage and flat footed) and following up with a quick fist to Grimsby’s throat the dwarf didn’t expect (10 bludgeoning and 3 precision damage, nonlethal), putting the dwarf on the ground.

“Hah! Is that the best you got?” Hallod laughed. 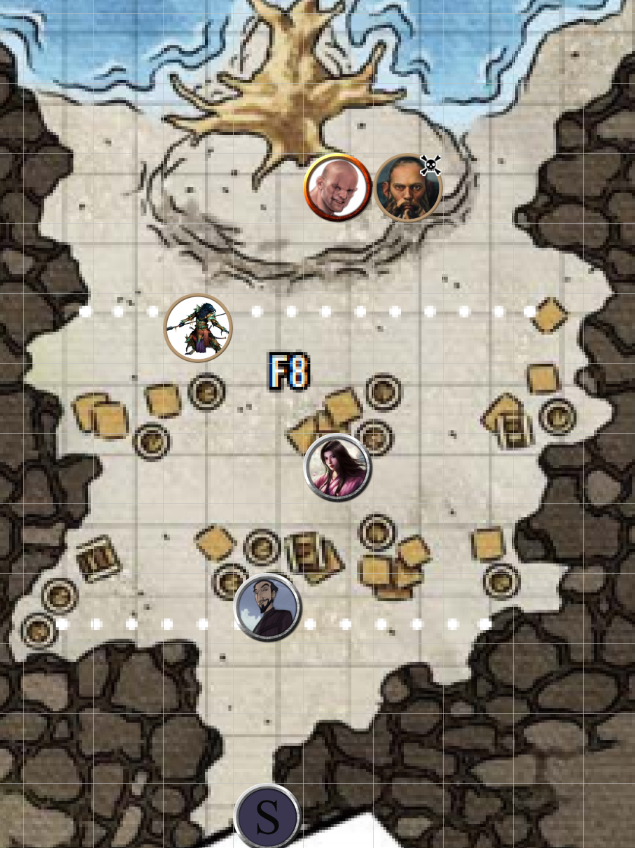 Silvi darts forward to find a position from which she might be able to heal Grimsby. Peeking above the crates her eyes narrow and she points at Hallod, intoning a holy incantation as she takes up Pak's assault on the villain's consciousness.

While Hallod stood bragging, Hiromi pulled three arrows out of her quiver and sent them in quick succession. She didn't know why she was so afraid to approach (now not feeling any braver after how quickly Hallod had dropped her friend Grimsby) but she was determined to build to it.

Pak brandishes his weapon and it is enveloped in a shimmering light. As Pak calls on his mystery his muscles grow larger and a battle fervor gleams in his eyes. Pak rushes Hallod jumping the rope trigger and swinging his katana at the man. His strike hits but prevents him from getting his shield in position to protect him from any counter attack.

Realizing that Hallod will not sway to logic, Mortimer decides that violence is the only way this can end. Now aware that there are trip wires, the barrister looks carefully before moving from cover to cover, hoping to reach their opponent without being noticed.

Hallod winced as Silvi assaulted his mind with magic, and grunted in pain. It distracted him enough for Hiromi to put two out of three arrows into him. And Pak rushed up the berm to Hallod’s side, slashing at the big man with his katana, putting a significant cut into the man as Mortimer moved in closer to cover.

Hallod growled and turned on Pakuten. His kukri slashed over Pakuten’s armor (8 slashing damage), knocking the kenku off balance. Hallod followed it up with a heavy fist to the kidney (9 nonlethal bludgeoning+2 precision damage), sending Pak to the ground to join Grimsby in unconsciousness.

“Who’s next?” Hallod growled, staring at Mortimer, Silvi, and Hiromi as he licked Pakuten’s blood from his kukri with grinned maliciously, even as he attempted to stay steady on his feet.

ROUND 3 PLAYERS ARE UP! 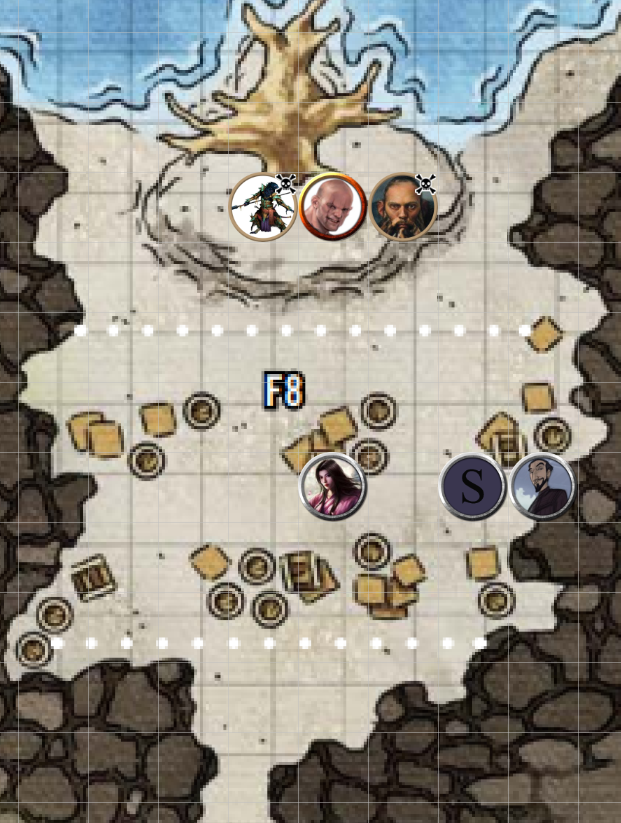 Hiromi stood and raised her bow in one hand as if she were about to surrender. As she did, she took two small daggers from her belt and flung them underhand, low, between the crates in front of her. One struck him in the thigh while the other spun past him as he stumbled.

With Hallod being poked full of holes by Hiromi's arrows and her own mental assault having proved effective a moment before Silvi opts to redouble her offensive rather than attempt to revive her companions, both of whom are still at Hallod's mercy should he turn his attention back to them. "There will be plenty of people for you to beat up in dreamland, so time for you to take a nap!" she exclaims as her magical energy pours into Hallod.

Mortimer does not even reply to the taunt, as he makes his way ever closer to Hallod. In between crates the barrister throws his dagger at the man, but he does not even wait to see if it hits before taking cover behind the next crate.

OOC: Are you guys not seeing the map? How close does Moritmer want to be? You can be right up on him if you want.

Hallod grunted as Hiromi’s dagger caught his leg. He glowered at her. “Bitch!”

Hallod started to step forward, and that’s when Silvi’s spell hit. The big man’s eyes rolled back in his head, and he stiffened (crit fail!) before he fell face first off the berm and into the dirt dead.

OOC: Daze is nonlethal. How would it kill him?