The Fantasy Trip outsells GURPS in 2019?

dbm said:
Gaming Ballistic have a license to release some third party stuff for Dungeon Fantasy, and it has been of a high standard.
Click to expand...

SJG has recently raised their rates for freelancers writing for both GURPS and TFT, and are looking for material for in all kinds of formats.

dbm said:
Gaming Ballistic have a license to release some third party stuff for Dungeon Fantasy, and it has been of a high standard.
Click to expand...


I’ve been impressed by the material that Gaming Ballistic has published. My primary current campaign is based in the Viking-inspired Nordlond setting rooted in The Citadel at Nordvorn and a couple of other adventures (e.g., Forest’s End and The Dragons of Rosgarth). We’ll be running session 24 tomorrow.

Gaming Ballistic also has plans to produce a massive tome of monsters to support the Nordlond setting and a self-contained powered-by-GURPS RPG called Mission X.

darjr said:
Wait didn’t SJGames open up a bit with GURPS third party adventures? Or am I thinking of somebody else?
Click to expand...

I'm the "Chief Everything Officer" for Gaming Ballistic, in case you don't know me.

Shortly after GenCon 50, I made a proposal to convert a short convention-style adventure from D&D 5e+Dungeon Grappling to the Dungeon Fantasy RPG. I'd run a campaign for Lost Hall of Tyr for 5e, as well as Dragon Heresy, and so I had plenty of art, and two successful campaigns under my belt. In short: it was nearly risk free. They eventually came around and said "yes, go." I looked into the feedback I'd gotten on the adventure, and up-gunned it. In the end, it became Hall of Judgment, expanded to 128 pages with new maps and a base setting.

It did well. So well that they let me do more. Citadel at Nordvorn (which I will admit is the product that to this day I have enjoyed writing the most) followed that effort, followed by the four-book Nordlond Sagas campaign.

At GameHole Con one year, I said "what more can I do for SJGames?" And Steve, in his classic laconic fashion, said "write for TFT."

Initially, I was hesitant; I'd never played TFT. But I found some authors who had and launched the "Four Perilous Journeys" campaign, which after some looking hard at my own value proposition, became Five Perilous Journeys mid-campaign, adding a spiffy Solo adventure Vampire Hunter Belladonna, written by David Pulver. SJGames was ridiculously kind and provided assets that let me add Decks of Destiny formatted cards.

The campaign did well for me. I am recently completing a second one: More Perilous Journeys. That will go to final stages of print fulfillment in a matter of a week or two. I just need to get one final art asset on the fifth and last book. Then it will fulfill and go live for retail. I have more plans in mind for TFT as well.

I did have some advantages. They knew me, as a long-time author for Pyramid, one of their go-to choices for Lead Playtester on some of the more popular books. A several-time Kickstarter runner with a background in project management. And a fairly popular blog that had, nearly since inception, promoted GURPS through something called GURPSDay. That continues still, though in RSS format, pulling from over 100 blogs whenever the authors write about things.

In any case: I've had a great time making GURPS and TFT materials. They're different systems (and I think rules matter), but both have a great place. I've been given permission to expand my horizons in the Powered by GURPS space hugely with a nod to do a full RPG that's called Mission X; it's in preliminary development and I have some very large projects (some announced, like the Nordlond Bestiary, and some not announced, like . . . oh, wait. FNORD.) in the queue over the next few years.
Last edited: Jan 24, 2021

That’s awesome! Thanks for stopping by! I try to make Gameholecon every year. I hope to find you folks there the next in person one.

I really wish I could write for TFT, but I just can't get a handle on the system. Meanwhile I have adventures for 5e and OSR sitting around doing nothing (unless I learn all the ropes involved in self publishing).

Argyle King said:
SJ Games accepts submissions for adventures and content. If you can write to their editorial standards, the pay is fairly good.
Click to expand...

And the editors work with authors to polish it.

Retreater said:
I really wish I could write for TFT, but I just can't get a handle on the system. Meanwhile I have adventures for 5e and OSR sitting around doing nothing (unless I learn all the ropes involved in self publishing).
Click to expand...


Sometimes it happens. I can relate to that. There are certain systems which (for whatever reason) just don't mesh with how I think about things in my own head.

FWIW, if you have stuff ready to go for OSR, my gut feeling is that it's not a huge leap to translate something into GURPS. I don't have enough familiarity with TFT (yet,) to speak on behalf of that, but I would guess that the same is also true. I say that because (to me) the design mentality behind what constitutes and adventure and a challenge -and how such things should be approached- comes from a similar headspace.

I would say the same about 5th edition, depending upon the tier of the adventure. In contrast, I believe that high-level 3rd Edition, Pathfinder 2, and some of the later D&D 4th Edition adventures are harder to translate into TFT or GURPS because the way that the games approach encounter design come from very different mental spaces. Which by no means is saying it cannot be done; I simply believe that OSR adventure design and heroic tier 5E are more similar to their approach and easier to translate into a different set of rules without losing the same general feel of an adventure.

For any TFT fans (or potential fans) following this thread, Gaming Ballistic launched a new TFT kickstarter last week: Character Collections for The Fantasy Trip. I'm pitching in even though I don't play TFT (yet) because I like NPC collections (and I find stats easy to convert). I've been running a campaign in Douglas Cole's Nordlond setting for more than a year now, and my players and I can attest to the quality of Gaming Ballistic products. We're having a blast. 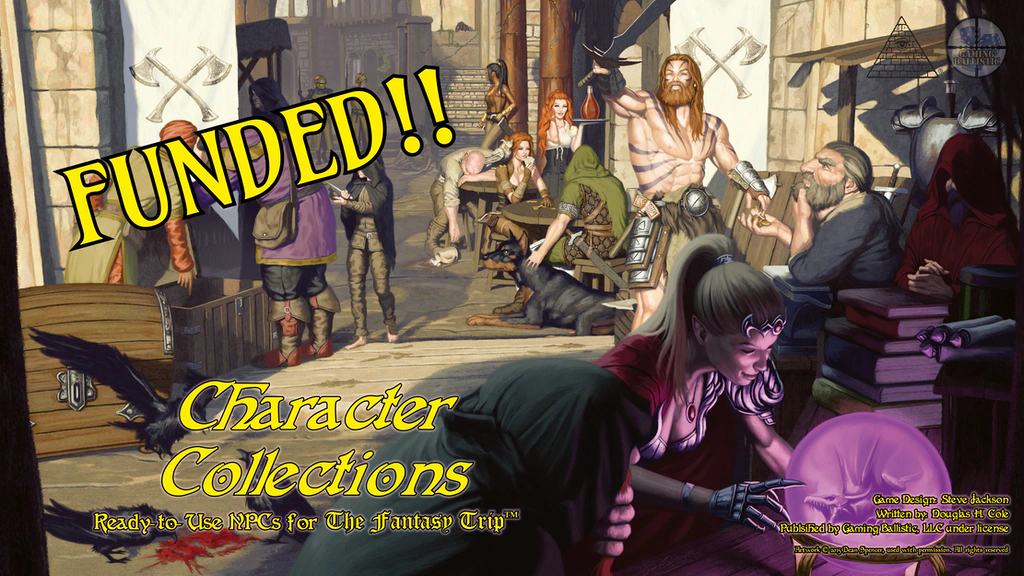