Tam, you see no obvious traps on the pyramid; whatever magical properties the pyramid has, they are passive / protective in nature. All that is left now is to insert the triangles into their respective slots. (Remember, the triangles are the non-active form of the magical devices that you've found so far. Saying the command word for each active device will cause it to revert to triangle form.)

Lathir will move around the pyramid to allow more access for the others.

Kleborn asks for the magical devices saying, "Our task awaits us, perhaps this pyramid will help us get forward with our task."

When he gets them, he approaches the pyramid, and says the command word to activate the triangles. He looks back at the group, gives a wink, and inserts the triangles into their respective slots.

Kleborn says the command word for each weapon, causing it to revert to its triangle form. He then places each triangle in its place. As he places each one, there is a snap, and a click, as the triangles are locked into place. As he places the last triangle, a low, rumbling and creaking sound can be heard from underneath the floor, a sound that must be the results of large gears and pulleys beginning to turn. The platform upon which the pyramid rests (which is basically the entire floor of the room) begins to slowly sink into the ground, at the rate of about 1 foot per second. Anyone that does not want to ride the platform down to its destination below had best hop off NOW! (You can hop back into the hallway very easily, for the first round.) 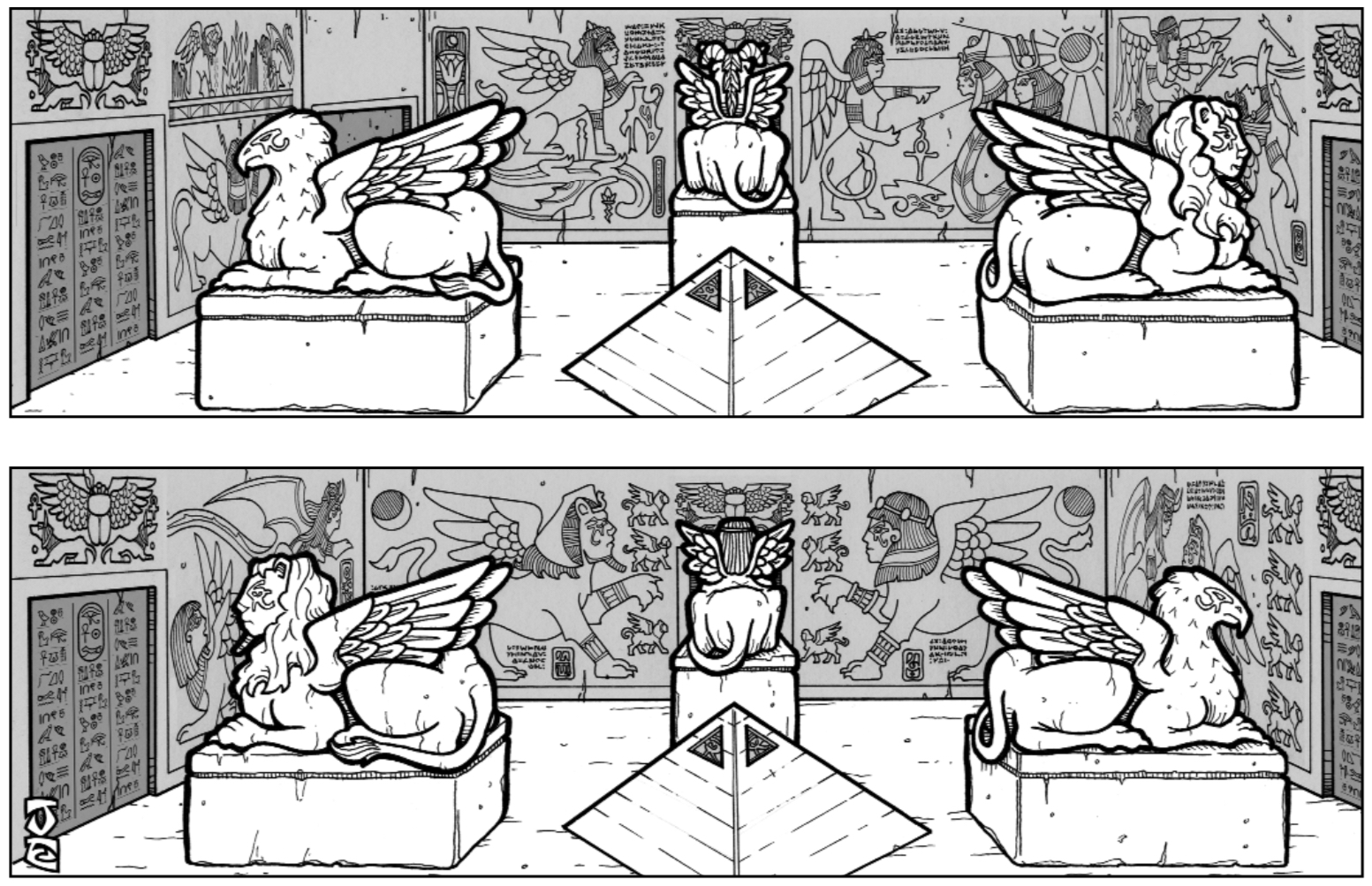 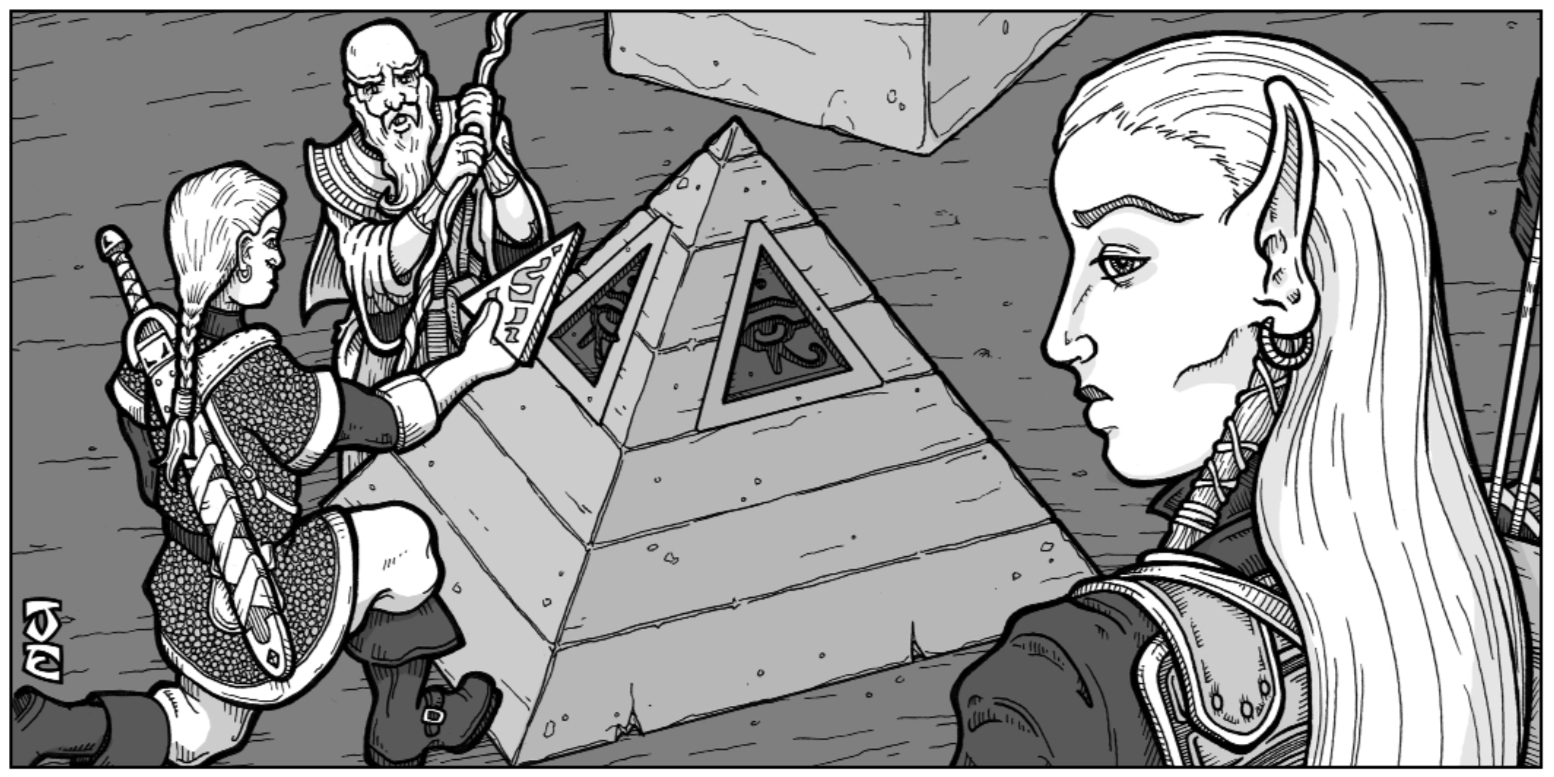 Reflexively, the instant Lathir feels the floor begin to descend, he overrides his instinct to shift into the form of a large eagle. The act of being startled only lasts for a fraction of a second, when he decides to ride the platform down. He merely shifts his stance to maintain his balance.

Supporter
Tam hangs with Lathir on this one, riding this thing as it descends.
"Well, this is exciting.", Tam says with a bit of a tremor in his voice --- the mix of curiosity and fright causes this.

Supporter
Tam hangs with Lathir on this one, riding this thing as it descends.
"Well, this is exciting.", Tam says with a bit of a tremor in his voice --- the mix of curiosity and fright causes this.
OOC: d20 = 11

After descending what seems like hundreds of feet, the elevator platform comes to rest in the southwest corner of a chamber. The chamber is about 80 feet wide and 60 feet long, with a 20-foot-high ceiling. Stone doors are centered in the north and east walls. The other two walls are covered with murals.

Along the south wall, nestled partially in an alcove, is a stone statue of a gynosphinx crouched in a classic position. The statue wears a stone crown set with numerous gemstones. An inscription is at the statue’s base. Positioned in front of the statue is a stone throne, perhaps 10 feet high, occupied by a stone statue of a barrel-chested humanoid body with a male leonine head. Its hands rest over the throne’s arms. The statue’s fingers are curled as if they should be holding something, but they are empty.

Flanking the throne is a pair of huge stone sarcophagi shaped like sphinxes lying on their backs, arms folded on their chests in a peaceful resting posture. The one on the right is an androsphinx; the one on the left is a gynosphinx. Each sarcophagus is inset with numerous gems at random locations on the lid. 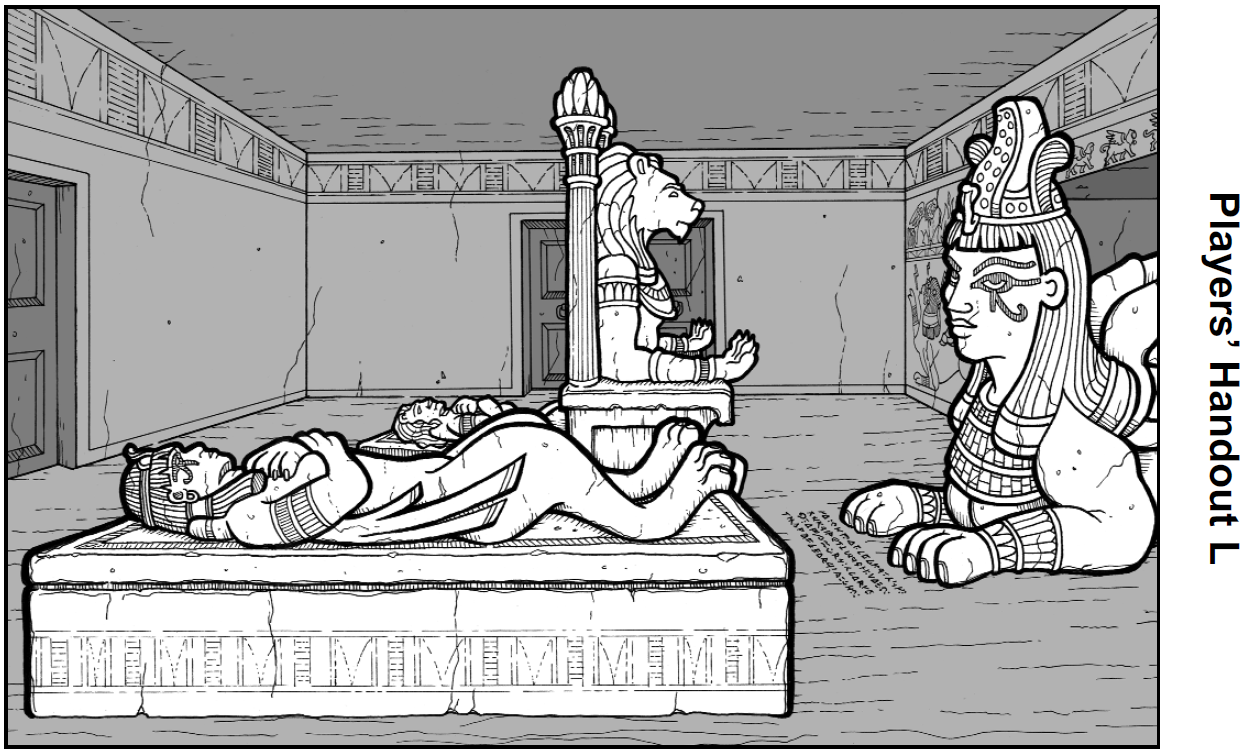 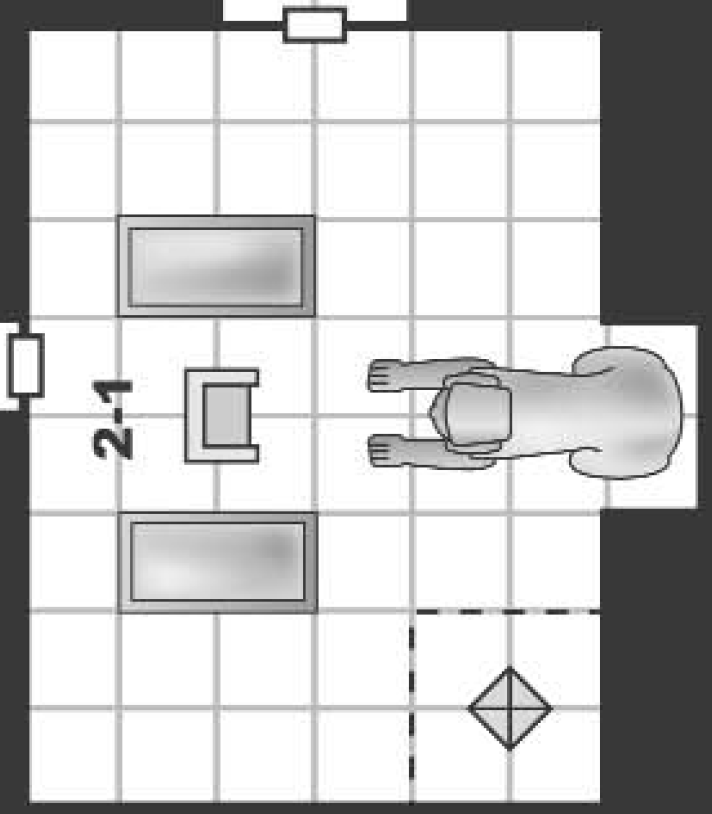 Lahir simply leaves the platform to give a cursory examination of the room, including the two doors, though he wonders what manner of phenomenal magic it is to allow such controlled moved of rock.
d20+5 = 18, 15
Last edited: Sep 6, 2022

Dewydd, Travis, and Lenny each stay on the platform and await the result of the party's reallocation specialist to inspect the surrounding area for traps.

Tam, you make a thorough search of the room, floors, walls, and ceiling, and you discover nothing out of the ordinary;

The inscription is beyond you. Perhaps one of the primary magic-users (Dewydd? Respen?) in the party could make sense of it?

The hands of the statue DEFINITELY are meant to hold something. But you're not sure exactly what.

Lathir notices nothing out of the ordinary, either. The doors are far too plain and simple to hold a trap. They open with simple pull rings. You do not detect any sort of magical aura anywhere on the doors, although the gems on the statue's crown, as well as the gems on the sarcophagi lids do radiate a very slight conjuration aura. As for the elevator, although the keys seem to activate the elevator through the use of magic, doing so is simply a catalyst; the actual movement of the elevator felt and sounded like mechanical gears. The keys simply set the gears into motion.

Supporter
Tam does notice that the hands and arms of the statue on the throne look as if they were presenting something to the larger sphinx statue before it.
Was it a box? A coffer?
Things to ponder.

Dewydd, Lenny, & Travis
Once Tam gives the all clear, Dewydd and the twins step off of the platform. Lenny and Dewydd confer together to decipher the script at the statue's base while Travis looks around the area for any helpful details.

Lenny's long hours of reading and studying have indeed paid off. He is easily able to decipher the inscription; after deciphering the text, he relays his findings to the party:

Lathir scratches his beard. "Like those other riddles, this one appears poorly versed so that it is a bit ambiguous at the end. I suppose we already have the two items, wether or not we have their names; but for the daylight part, is there something we are suppose to open up to allow light in or do we just magically generate some?"

Varl speaks up, surprising many of the party; he had been silent a long time: "You were absent for awhile, tree-hugger, so I will fill you in. We have the four lesser keys, Kheteru, Anshek, Hrukesh, and Neteris. Other clues we found pointed toward the existence of so-called "greater keys," but we haven't found any of those yet, and so we have no idea what their names might be, although this riddle all but outright says that there are 2 greater keys, named Iti-Anun and Iti-Atun.

To my mind, "treasure not plundered" must be talking about the gems. They are probably needed to either produce, or focus, light in some manner. Hence, better to leave them in their place, and not remove them."

Supporter
As Varl is speaking, Tam was beginning to climb the jeweled statue; but, when he states:
"...better to leave them in their place and not remove them.", he groans in thwarted expectation as he slides off the statue.