ScottDeWar_jr said:
Xao has yet to truely prove his value to the party so he refrains from claiming one of the rings. he is more curious as to how to remove the key from the largest Leonid.
Click to expand...

Sensing some perplexity or seeing the concentration upon his face, Lathir inquires as to the quandary. He offers, "I call upon Mielikki to transmute rock to mud, but I do not think these things are really stone. It may simply require brute strength. If so I can shift form to see if I can pull the thing free."

*Metaphysical gibberish to me, but Xao seem to know what he is saying

Lathir is correct; the creatures' skin was not actually stone, it was super-tough, leathery hide (like that of an alligator) which was grayish in color, giving the appearance of stone, further strengthened by magical means (permanent Barkskin); However, casting Flesh to Stone would turn their flesh into brittle, breakable stone, which would then make removal of the key pretty easy. Or you could simply chop the beast up into a bloody mess, and remove it that way.

*Metaphysical gibberish to me, but Xao seems to know what he is saying

Translation for the more enlightened minds of the dark arts:

"If you transmute it as stone to mud, it will fail. However, if you trasmute the flesh flesh to stone it would make the tough hide brittle stone and we can just break the stone away from the key .. .. .. or we can save the spell and just cut it away from the corpse."

He looks to the leonid and reaches to his side as if to draw a weapon - only to grab at air. A bemused look appears on Xao's face as he sheepishly grins, "She took all of my weapons, the crazy bitch. Might you have a dagger I can borrow to do some carving?"

Supporter
Tam puts on the ring given to him. Looking at it he feels a little better, still having ghost pains from the Leonid's vicious attacks.
He then watches the proceedings on the key.

ScottDeWar_jr said:
... He looks... "Might you have a dagger I can borrow to do some carving?"
Click to expand...

Lathir, who is in fact a rather patient man, sees the limitations of such an approach as well as the exasperate amount of time it would require. He shakes his head and walks over to the leonid.

"Too meticulous, you will probably want to step back a bit. This is likely to be messy."

He reaches down a grabs the arm of the beast to begin pulling it toward himself. In the blink of an eye, the blondish man and his belongings once again transform into a large bear. The bear moves into action with a ferocity never seen in the personality of the man who became it. He drives his claws into the chest of the leonid, unceremoniously ripping at the key to free it.

Despite being a Dire Bear, Lathir has enough precision with his claws to rip the key free from the Leonid's chest rather quickly; it is indeed messy, as Lathir predicted, but contrary to everyone's expectations, there is very little flesh rended. Most of the mess is from the blood, which spews and splatters EVERYWHERE, and upon EVERYONE. The key is freed within 12 seconds (2 rounds) and once removed, results in even more blood splatter on a massive scale.

Lathir, in a calm and nonchalant manner, silently nodding in affirmation, hands the newly-freed key over to Dewydd.

Dewydd Moresby
Looking at the key I ask Respen, "Do you happen to have any scrolls of Identify or magical items that can do such on you? I never have Identify prepared and prepared spellglyphs instead of scrolls for this excursion." While looking at it, I cast Detect Magic to try and identify the auras on it.

Sylvar, covered in blood, stares blankly for a moment at the source of the spray that has painted everyone red.

He wipes the blood from his face with a kerchief. Straight faced, he looks at Tam, and says, "I usually try to keep as much blood off myself as possible, but apparently it was all in vein."

Respen says, "I have one more charge in my monocle for the day; let me see it."

Respen casts a Clean cantrip on the key as Dewydd hands it to him. He then focuses the power of the little lens upon it, studying it for several, long moments.

Finally, Respen says, "This key is a powerful weapon. It can turn into a flaming sword, which has the power to strike even insubstantial beings, such as ghosts; it also bears the power to summon and focus the rays of the sun, which is the bane of many undead creatures."

Xao uses a clean spop on his robe to wipe his face and hands, " Now that we have gotten to the heart of the matter, shall we return to the .. .. .. central(?) chamber?"

Good idea. Sylvar follows Xao up the hallway, humming an upbeat tune, and sings a lyric to himself... "When we dance with the Jack 'o Shadows" before trailing off back into just humming.

Since the END of the Lamia battle, including time to rush down the hallway to this room, talk to the Leonids, and have the battle, and to heal after the battle, took a total of 36 rounds (3 minutes, 36 seconds.)

[Basically, everyone except Tam, Lathir, and Xao.]

+5 bonus to all saves (Guardian Bonus, stacks with everything) for the duration of the adventure.
KEYS: SPECIFIC TREASURE: 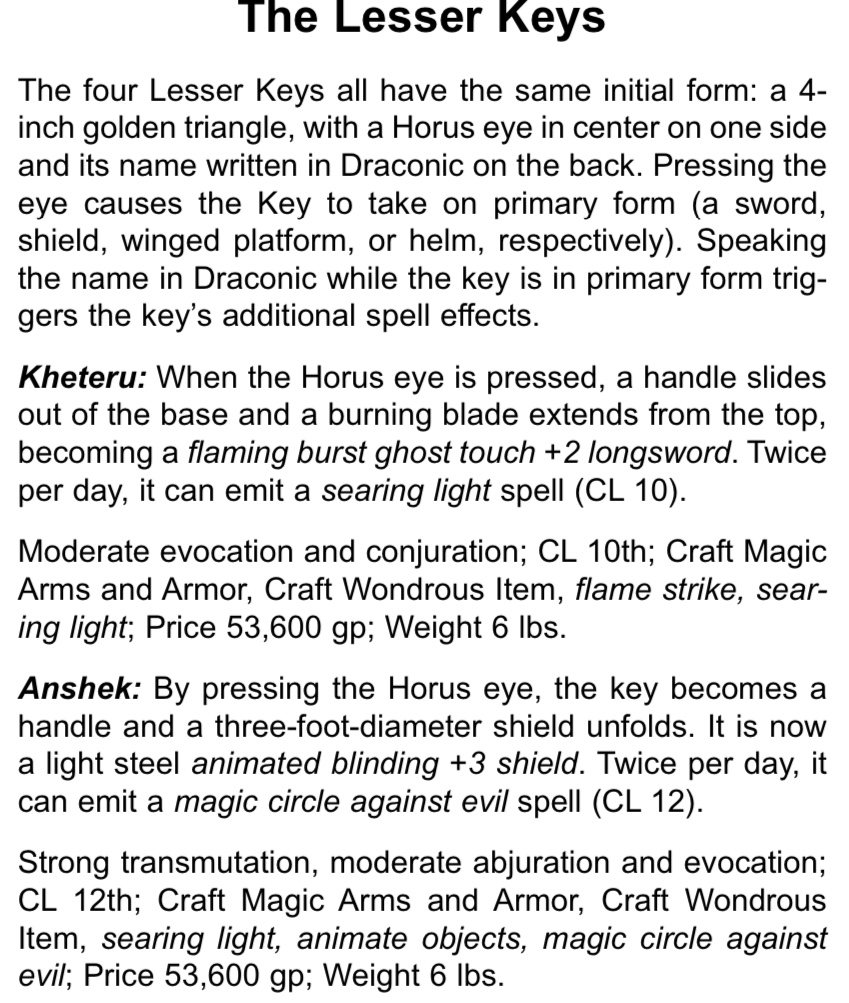 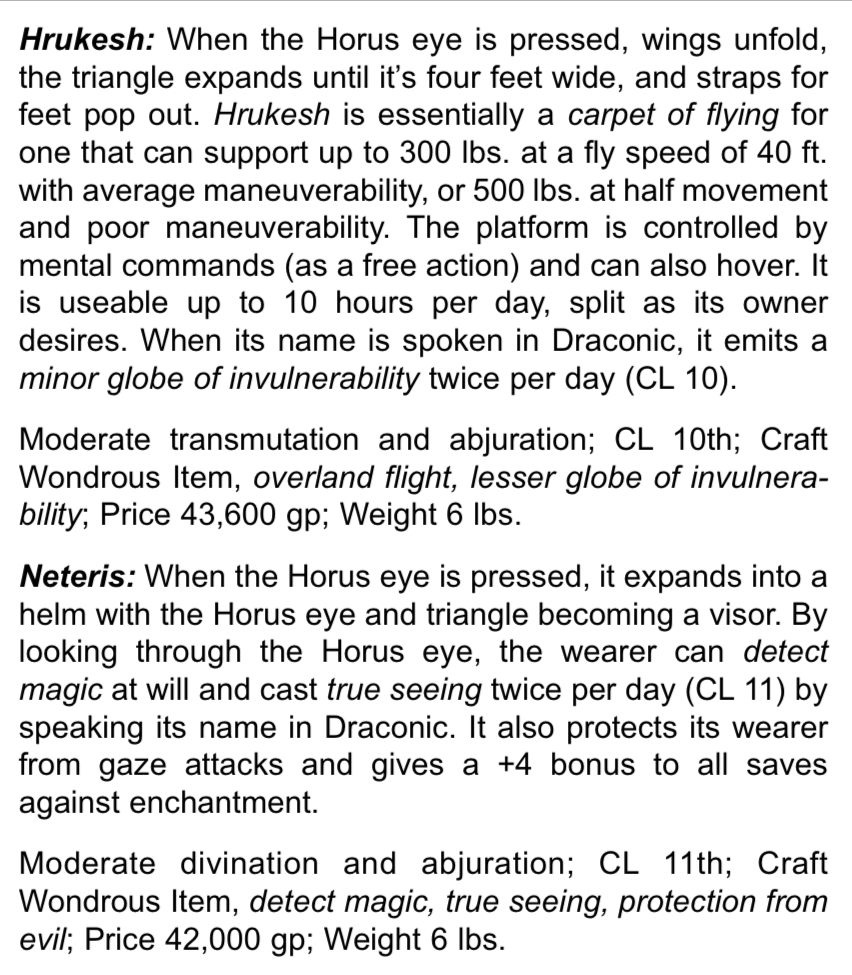 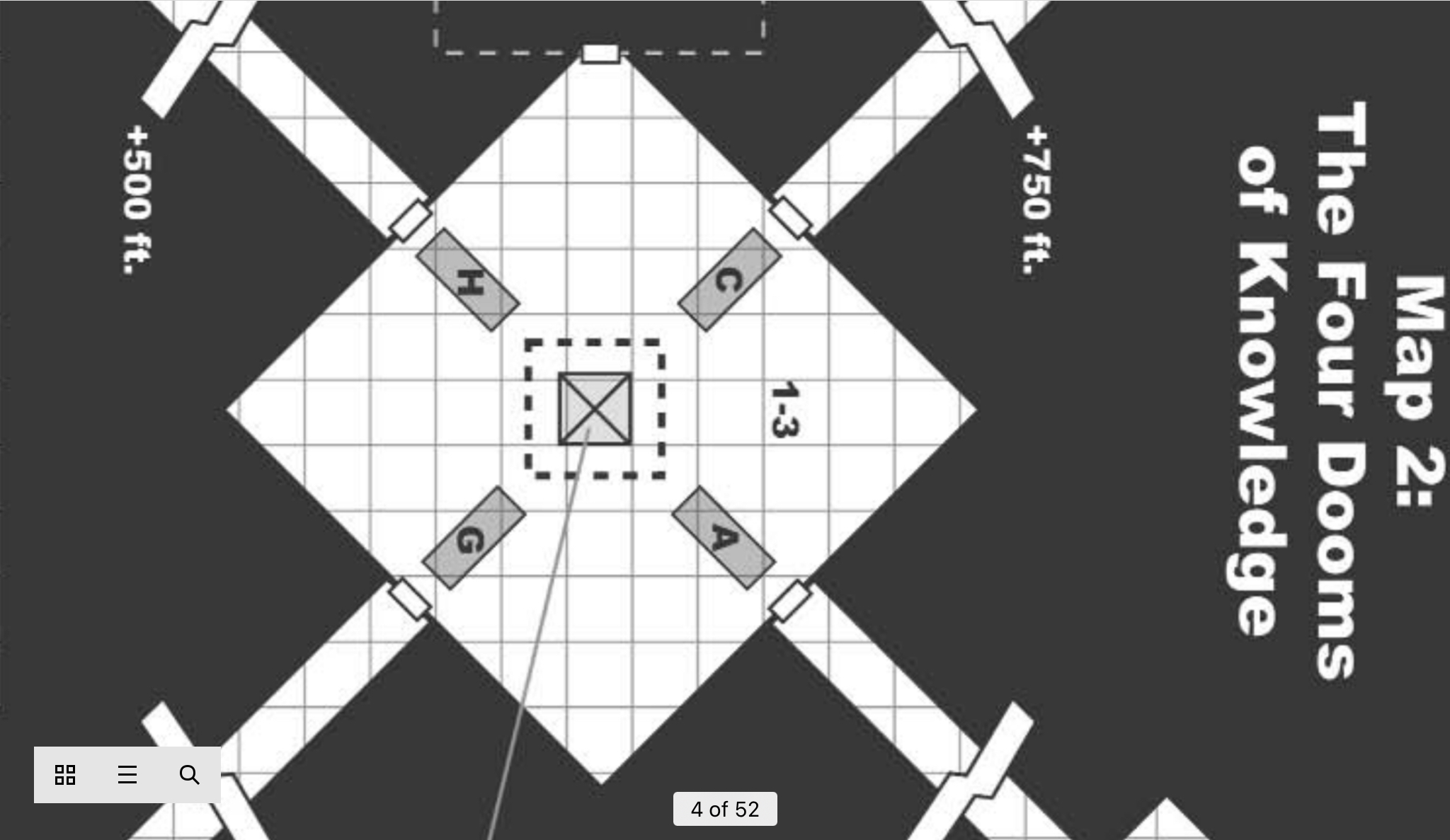 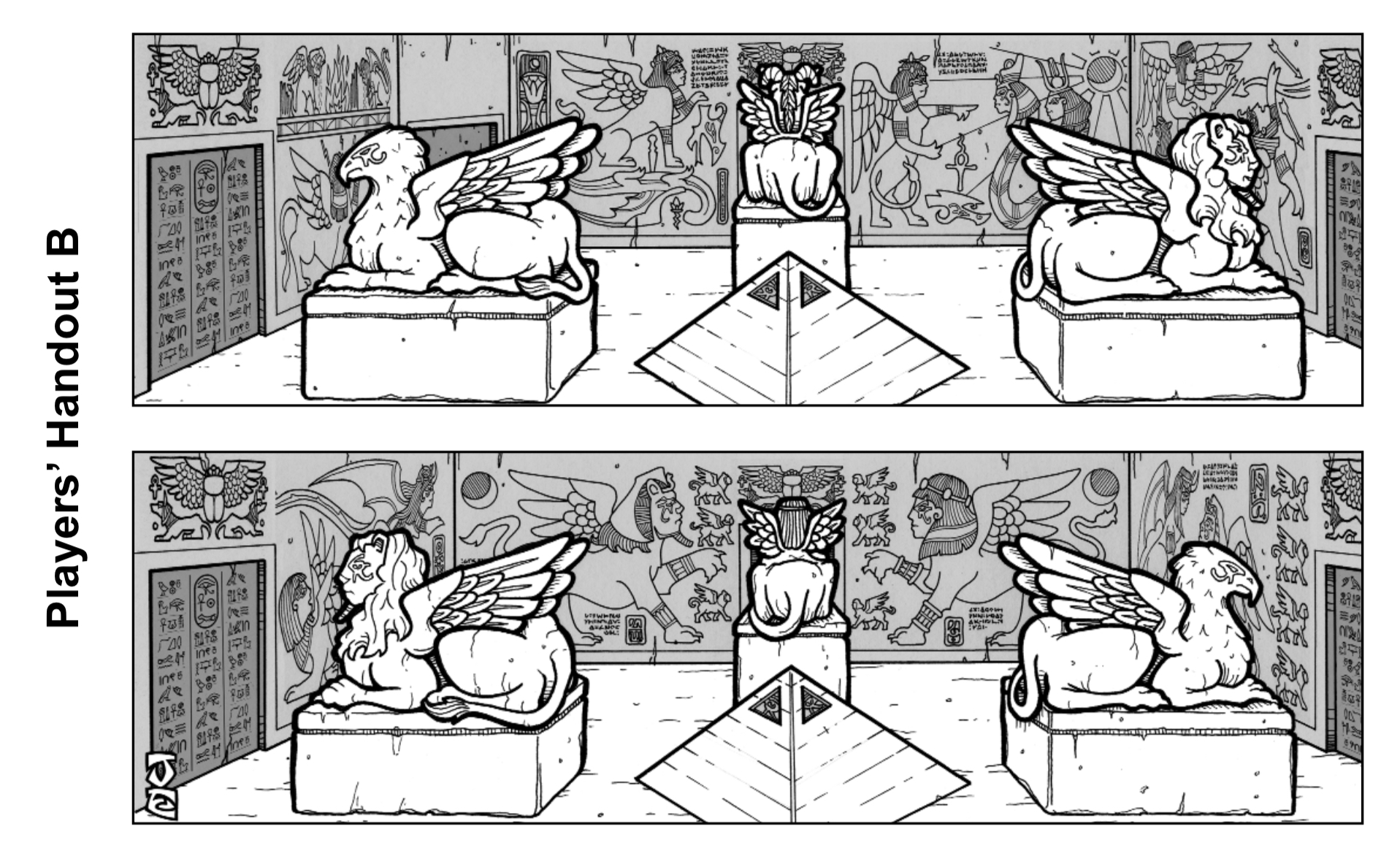 This chamber is 80 feet square with a 40-foot-high ceiling. The door you have just opened is positioned in the west corner of the chamber. Situated in the middle of each of the four walls is a 10-foot-wide stone door covered with inscriptions. The remaining walls are covered with detailed murals.

In front of each door is a stone pedestal, 10 feet wide, 20 feet long and five feet high. Crouching on each pedestal are full-sized granite statues of sphinxes. Each pedestal holds a different sphinx, and all face their respective doors in silent vigilance,

To the right facing southwest is a falcon-headed hieracosphinx, and to the left facing northwest is a goat-headed criosphinx. On the other side of the chamber, a male androsphinx faces northeast, while a female gynosphinx faces southeast.

In the center of the chamber is a squat pyramid, perhaps five feet high. Composed of smooth tan stone, each of the four surfaces is engraved with a small triangle with an eye set into the center.

Lathir is only there to support and protect the party, as needed. He waits for the others to decide what it is they are going to do. In the mean time, he takes the opportunity to discus philosophy and self-discipline with Xao.

Lenny suggests, quietly, "Um, hey, why don't we put the keys in the pyramid, and see what happens? @Waynan Tam, before we do that, why don't you check the pyramid for any obvious (or not so obvious) traps?"

Supporter
Tam looks at Lenny with some mild surprise. Sure, he and Travis were exceptional in battle, but they always seemed to play at being "in the background", making Tam wonder if there was more to them than just good warriors.
Realizing that he had been taking them for granted as just extra muscle all this time, Tam was impressed with the forethought, and prudence, of Lenny's request.
"You're right, Lenny. That would probably be a good idea."
Looking at the spellcasters in the group:
"And if any of you lot could cast your Detect Magic on the thing to see whether, if there are magical traps and such, we'll need one of you to Dispel Magic, instead of me fiddling about conventionally."

Waynan said:
Tam looks at Lenny with some mild surprise. Sure, he and Travis were exceptional in battle, but they always seemed to play at being "in the background", making Tam wonder if there was more to them than just good warriors.
Realizing that he had been taking them for granted as just extra muscle all this time, Tam was impressed with the forethought, and prudence, of Lenny's request.
"You're right, Lenny. That would probably be a good idea."
Looking at the spellcasters in the group:
"And if any of you lot could cast your Detect Magic on the thing to see whether, if there are magical traps and such, we'll need one of you to Dispel Magic, instead of me fiddling about conventionally."
Click to expand...

Respen: (Without saying a word), casts Detect Magic in the pyramid.

Detect Magic reveals that there is indeed a strong enchantment aura emanating from the pyramid; this means that the pyramid itself is probably magical, or warded against harm, or perhaps both. But that doesn't necessarily mean that there is a magical trap on it.