ZEITGEIST The maps of Zeitgeist

Hi All, I've seen some great maps people have made for this campaign so I thought why don't I make a thread where everyone can put their best maps up. Part showing off, and part to see inspiration of other maps that you all have made.

My group is just about to go to the Ziggurat of Apet, So i made a fun map for the Rainbow Puzzle.

I also made a nice map of the Coaltongue here we used in Session 1,

Absolutely! Those look fantastic. That's the one downside of playing in person is one cant put good graphic design work to use unless you want to shell out a ton of money for a print.

I've taken many of the maps and other locations (including the Coaltongue) and had the blown up and printed out by photobox.co.uk on their largest poster sized printouts. Sure I could draw them out on the battlemap, but the glorious full colour maps look great and get awesome player reactions. I did the same with the overall world and flint maps which get used all the time.

I've then augmented this with additional cardboard terraine. I have loads of cardboard, full colour, stuff from battlesystems (from multiple kickstarters that I have done) and I use that. Lots of battlesystems futuristic gantries make excellent industrial style upper walkways - for the spooky warehouse they were awesome. Where the scales don't quite match up, I just use the local terrain you are on and gloss over the difference with a "the 5ft is relative to the terraine you are in" 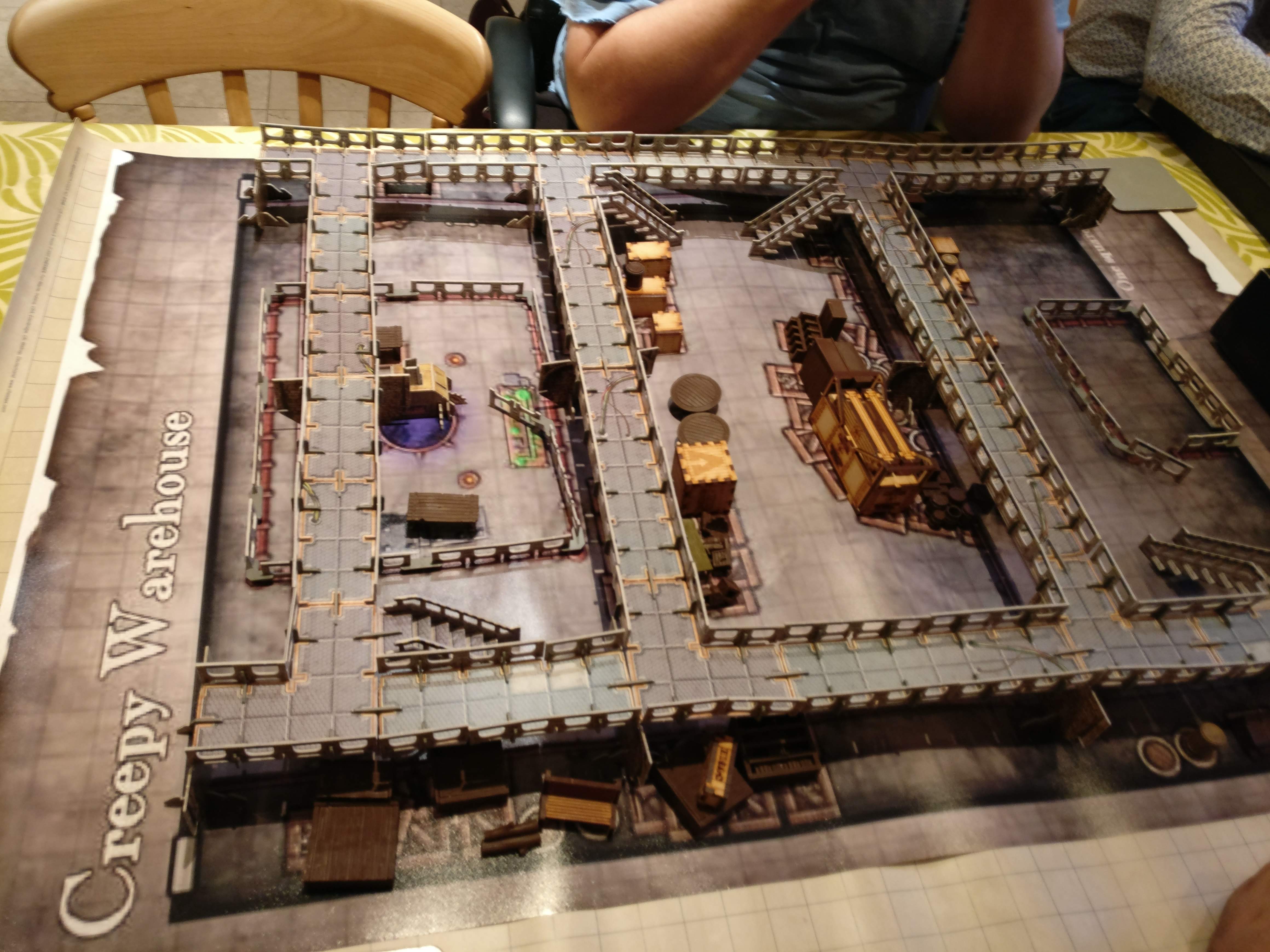 The more stuff around there is for players to use or interact with, or hide behind the better the gaming session is.

I mess with the scaling a little in photobox so that the squares on the maps end up at a real world 1 inch or slightly larger by counting numbers of squares and comparing that agains the printout size. At 45" by 30" stuff looks just great. Photobox complains about the low resolution of the images, but just ignore that message, for gaming it's awesome.

I arrange to do a bunch at once to get discounts, etc, works out at £10-15 per map. Most maps can be reused a couple of times. The train was awesome, did that, cut out all the carriages had them end to end, I've had several other rail encounters

One of the high points of running this campaign has been drawing out some very interesting maps for the group to go stomping through. When I ask them about the more memorable ones, they mainly remember the Bridges of Light puzzle in the ziggurat... 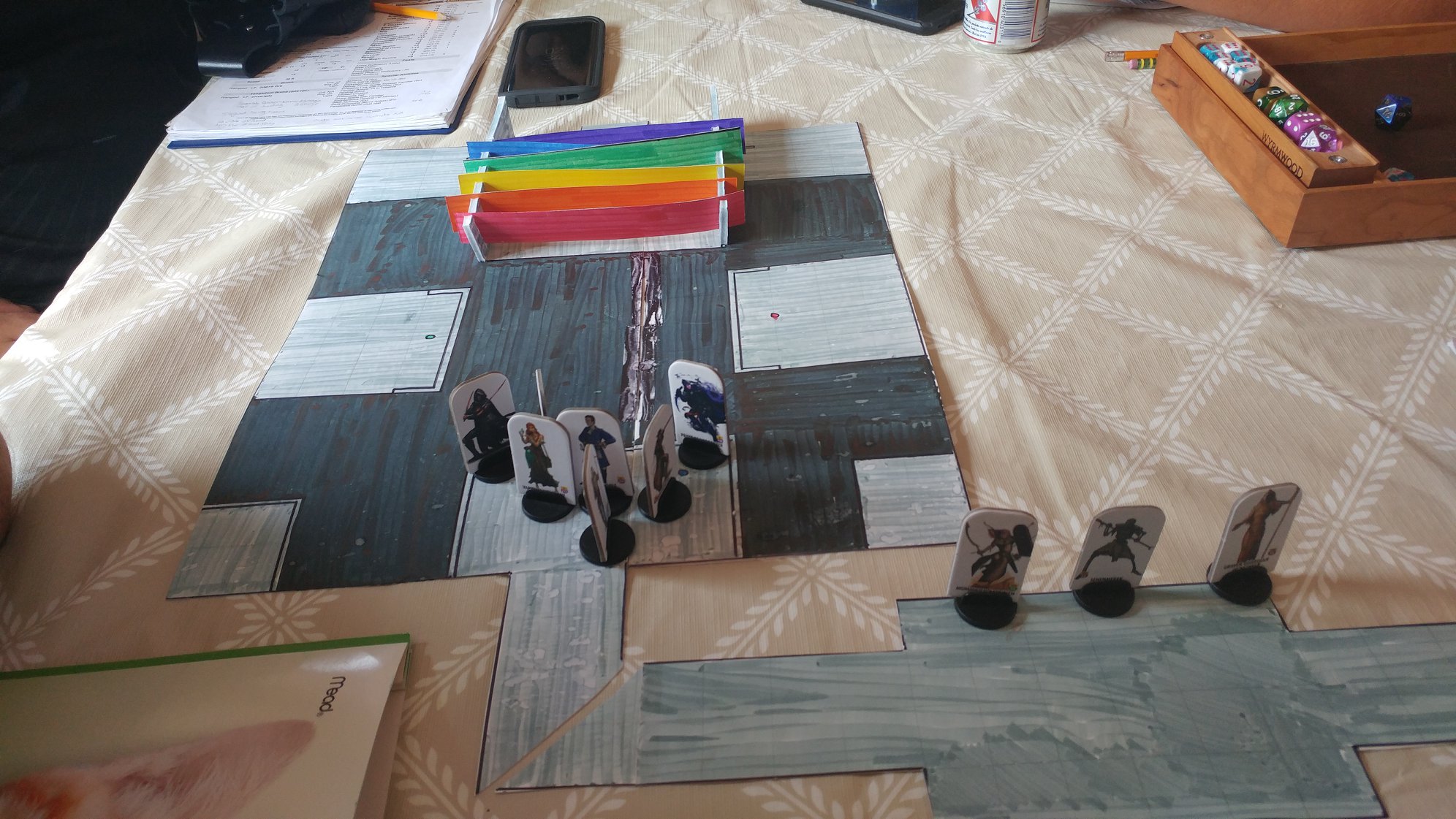 ...as well as the fight against Ekossigan more recently. 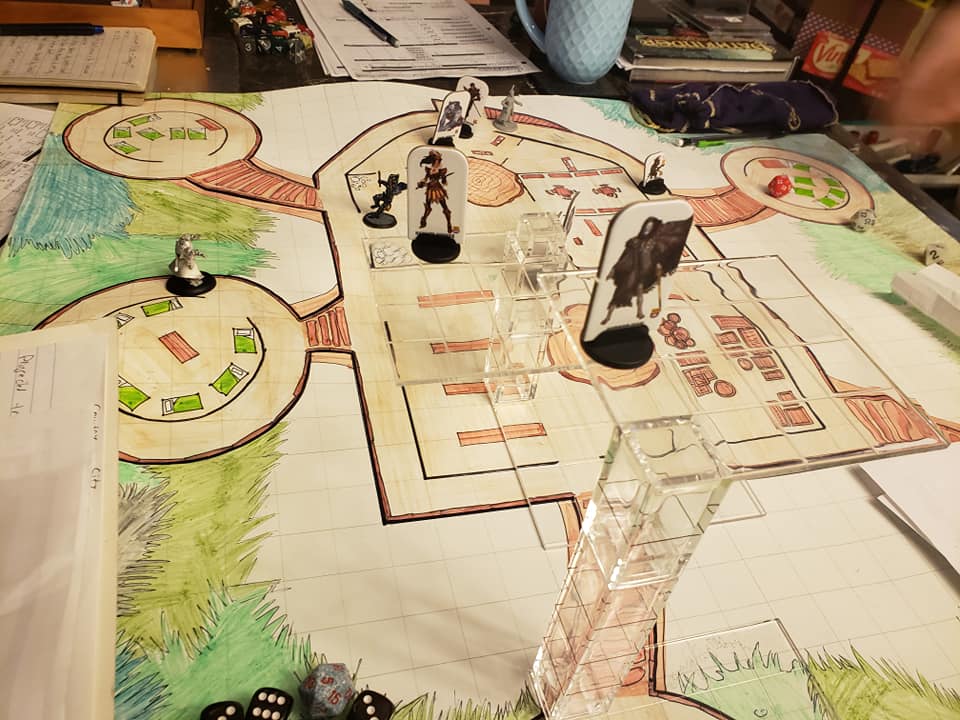 I knew that all that time spent in high school learning comic book drawing would come in handy! I mean, it already did in some respects outside of glorious nerd hobbies. But really, it's about being able to draw stuff out for the players in my three groups.

Most of my game has been in-person with battlemaps drawn on a vinyl mat, with clear acryilic risers for elevated areas.
This year is Roll20. My best so far is the Axis Island ritual site.

Also, my world of Llanjyr is (initially) a flat disc with mountains along the rim (far away from the game continents) but otherwise physics is mostly normal.

Between the Clergy and the suggested accents, this popped into my head and had to be let out: (Yes, I moved a few mountains and maybe a continent a little bit.)

www.enworld.org
It took the players a long time to wrap their heads around that.
But then, when they were finally good with it, the Obscurati ritual happened.
And now the world is a sphere.

My group has been playing Zeitgeist for over a year now, but sadly mostly online since last March. I'm going to share a bunch of photos and images with my versions of the encounter maps.

Pre-pandemic I began with making maps in a combination of Dungeon Tiles and more complicated pieces made with MapTool, using resources from Dundjinni.

1. Halfway through the fight in the lower decks of the Coaltongue, the RHC tries to open the rusted relief valves, while Sokana begins to run upstairs. Her fire sprites have already been dispatched.
Sadly I lost my pictures of the 3D setup I did for the Sea Cave when my phone died.
2. For the next big encounter, I got more ambitious to create the Sea Gate encounter in 3 dimensions with Lego. Sadly by the time I had completed it on timeoff, the pandemic struck and no more in-person games.

For the past year my Zeitgeist campaign has only been online in Roll20, so here are my maps from the remainder of The Island at the Axis of the World. Again, created in Maptool using Dundjinni assets, plus others I've found or purchased online.

Looking back on the maps, I can really see how I've improved in using these tools for the maps in that time.