100 years ago this year, the largest battle for labor rights in the United States took place in West Virginia. This real world event inspired a new RPG by Jennifer Adcock, author of Only One Bed and Whispers from the Thousand Moons. Jennifer was kind enough to answer my questions about what inspired The Price of Coal, how it’s played, and its relevance today. 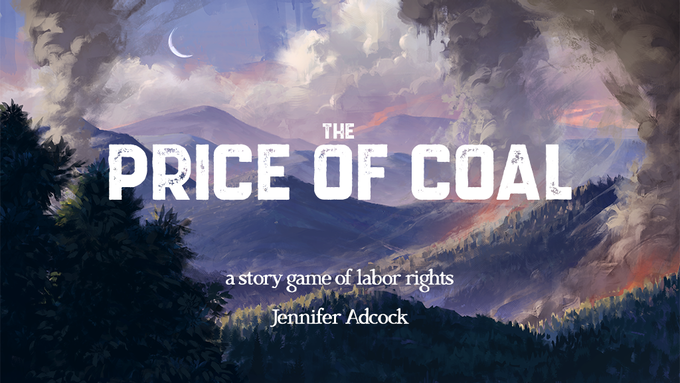 EGG EMBRY (EGG): What is The Price of Coal?
JENNIFER ADCOCK (JENNIFER): The Price of Coal is a card-based story game about the West Virginia Coal Wars and the Battle of Blair Mountain. It’s about how communities can come together to care for each other when systems fail to protect people.

EGG: What inspired you to create a game about the lead up to the Battle of Blair Mountain?
JENNIFER: My first inspiration was actually a book of poems I had found, written from the point of view of the miners and their families and loved ones during this time. That lead to me doing some research on the event itself, which I had never heard of before. I was so upset that I had never been taught about it before, that it had never been covered in my history classes, and I wanted to do what I could to help make sure it wouldn’t be forgotten.

EGG: Since this is built around a historic event, what kind of research did you do to get in the right head space to create this game?
JENNIFER: I did quite a bit of reading while working on the game, any books I could get my hands on about the subject. But the other thing I did to get in the right frame of mind was listening to old mining songs and old union songs. For me, that really helped put me in the same place emotionally as these people, not just for their struggles but also their joys. Whenever I wasn’t sure if I was getting the tone I wanted to, those songs were really something I could turn to.

EGG: This event happened a century ago, do you feel those events have relevance to our world today?
JENNIFER: Absolutely! One thing I kept coming back to while I was working on the game was wishing that it wasn’t relevant, but accepting that it is. Unfortunately, we live in a time where wages are low, unions are suppressed, and people can’t afford to see doctors or send their kids to school or keep food on the table. The Battle of Blair Mountain was even just a couple years after the Spanish flu epidemic. All summer this year, coal miners have been striking in Alabama. It’s hard not to see history repeating itself. But the game is about how they were not powerless and neither are we – the world changes when people take care of each other. 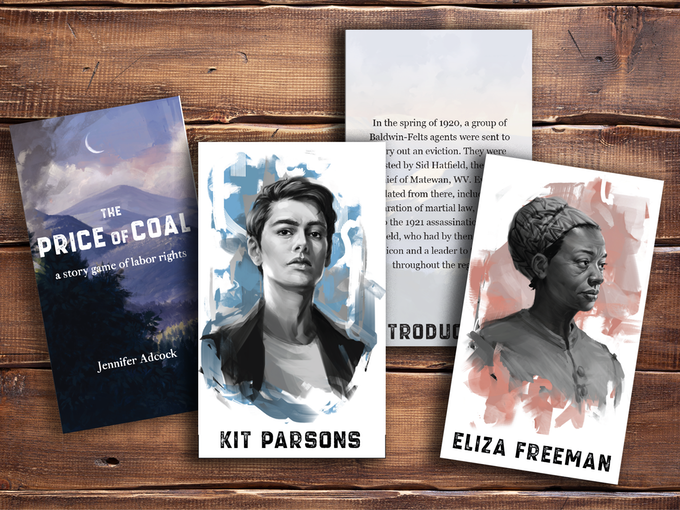 EGG: Turning from the history and story, let’s talk about the game itself. How does the engine work?
JENNIFER: Players each get to play two characters – a coal miner, and a family member or loved one of a coal miner. The first part of the game is setting up relationships and histories between all of the characters. Who do you rely on, who do you mistrust, and so on. From there, players take turns drawing prompt cards and roleplaying scenes. Each prompt card has some kind of problem that’s arisen in the town that you’ll need to come together to address. Maybe the schoolhouse has closed, maybe someone’s being evicted, maybe there’s a cave-in down in the mines.

EGG: What can players expect to do during the game? What is the ideal session like?
JENNIFER: At the end of the day, this is not a game about changing history – in every session, the battle still happens, the union is still weakened. It’s about what drives people to that point to begin with, where they have no choice but to stand up for themselves. It’s about how people can care for each other, even through the worst times. So to me, the ideal session is one where players step away from the table afterwards, look at their own communities, and start seeing who they can help.

EGG: That would be a great session, I agree. This game is set during a time when equality and inclusiveness were illegal. How does this game address those injustices so it’s a fun experience for every gamer?
JENNIFER: One thing I kept finding in my research is that the actual history is not nearly so white and male as modern depictions might have you believe. Many coal miners at the time were Black, or were immigrants. It was a common and well-documented tactic of the mine owners to pit white miners against miners of color, so that they wouldn’t unite against the bosses. There are known cases of women or other people of marginalized genders pretending to be men so they could work the mines, because they had no other way to provide for their families. So when we included Black miners, immigrant miners, transgender miners in the game, to me, that’s not painting history with a modern brush. That’s portraying history as it really was. 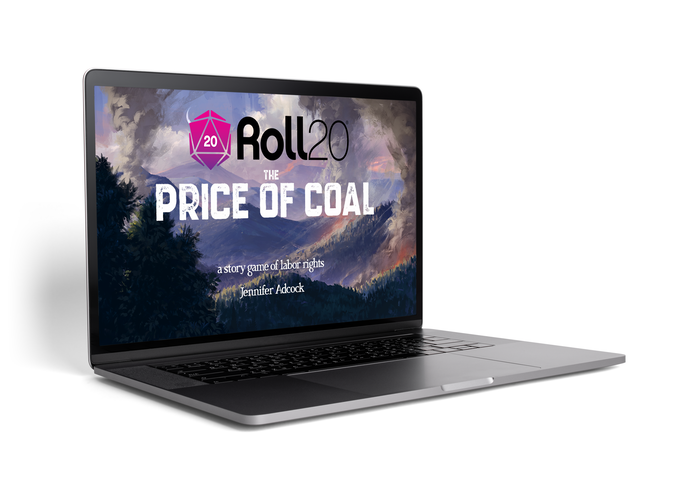 EGG: That’s a fair assessment. There’s the physical game and a great deal of emphasis on the Roll20 option. What can fans expect from the Roll20 version?
JENNIFER: One good thing about the last year and a half is that we’ve all gotten a lot more comfortable and familiar with gaming online. I ran a lot of playtests of this game online, and I was never really satisfied with the workarounds I came up with for a fully card-based game. Having one player with the printed deck of cards was always clunky and left people scrolling through PDFs or scrambling to remember what info was on which cards. With the Roll20 version, I’m really looking forward to it being a smooth online experience, where everyone can have all of the information right at their fingertips, along with the beautiful art we’ve worked with Jaqueline Florencio to create for the game.

EGG: Beyond The Price of Coal, what else are you working on?
JENNIFER: I’m one of those people who always has a million projects going at once, but one thing I’m excited to work on next is a game about the romantic ideal of knights, the chivalry, the traditions, and the conflicting oaths you swear and might be forced to break. That’s always been very interesting to me.

EGG: Thanks for making this game and answering my questions about it. Where can fans learn more about this project?
JENNIFER: I’m on Twitter at @JenKatWrites, and I am always happy to chat with folks about the game! If people want to hear an actual play to get a feel for the game, we recorded a really excellent session with One Shot Podcast.

The Price of Coal: A Story Game of Labor Rights from Unicorn Motorcycle Games

Having grown up in southern West Virginia, I am awed and amazed at this unexpected RPG development.

And did ya know, the WV Coal Wars were not even mentioned in our history classes either? In public (government) schools. That blind spot is a result of the three-way structural fusion of Culture-formation (Education) and Government and Business.

-Travis H.
Author of Oh Appalachia: For Cultural Independence, and designer of (one of many) Appalachian Flags.

Labor day was an appropriate time to post this. I know we watched "Matewan" in high school so some schools taught it. Probably ones with strong teachers unions.

Dungeonosophy said:
And did ya know, the WV Coal Wars were not even mentioned in our history classes either? In public (government) schools. That blind spot is a result of the three-way structural fusion of Culture-formation (Education) and Government and Business.
Click to expand...

One of my history professors noted in one particular book about Arkansas history you could find dueling in the index multiple times but not one single entry for labor. In high school I can remember a little bit about labor regarding various strikes and the Triangle Waistcoat Factory fire but that's about it.

Putting people some way into the perspective of those at the time is history gold. And the local setting seems to add plenty to the authenticity. That it isn't all fireballs and happy endings . . . reminds me of Grey Ranks where the sense of being painted into corners is largely the point of the game.