UK Games Expo and Origins Game Fair often leap-frog each other each time they have a new convention, both battling for the #3 spot on the list of the world's largest tabletop gaming conventions (after Gen Con and Essen Spiel). UK Games Expo is up 18% in attendance this year over 2018's figures, maintaining the #3 spot for two years running! 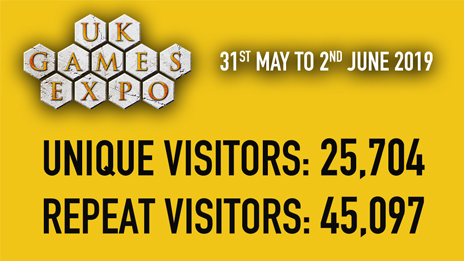 You can see last year's figures here. UKGE has gone from 21.7K uniques to 25.7K, or 39K turnstile to 45K turnstile. Here's the current chart; Origins Game Fair takes place very soon, so the chart will change when those attendance figures arrive! UKGE's exhibitor figure has gone from "400+" to "430+".

*Claims to have doubled in 2018, but figures have not been published

Gen Con is in August, Essen Spiel will be in October. Conventions which don't focus exclusively on tabletop games tend to be bigger, especially those which include comic books (Italy's Lucca Comics & Games dwarfs all of these), but this chart is about specifically tabletop gaming conventions.
Click to expand...