Kobold Press is continuing its D&D 5E offerings with a new Kickstarter which is set to launch today (Monday). I'll update this article with the link when it arrives (update - it's now live), but the project is a new 5E monster book called Tome of Beasts. Kobold Press, of course, made the Tyranny of Dragons adventures for WotC. They've kindly sent along a preview of this new book - an eye golem - which is one of the more than 300 monsters in this book.

[UPDATE: The Kickstarter has now launched!]

This makes the second major monster book from a third-party (Necromancer Games produced 5th Edition Foes earlier this year). Here's what I know about it so far - it's 300+ new monsters which are compiled from Kobold Press' history, full colour, and will be Kickstarted for 30 days starting Monday 5th October. They mentioned that the book would include clockwork creatures, drakes, dragons, devils, and dark fey.

There's also a Book of Lairs which features short adventures (and also starring some of these monsters), each with a large encounter map.

What else have the Kobolds produced for 5E? Aside from the two Tyranny of Dragons adventures for WotC, they've already brought us an adventure called The Raven's Call, and a pile of races and backgrounds in Midgard Heroes. 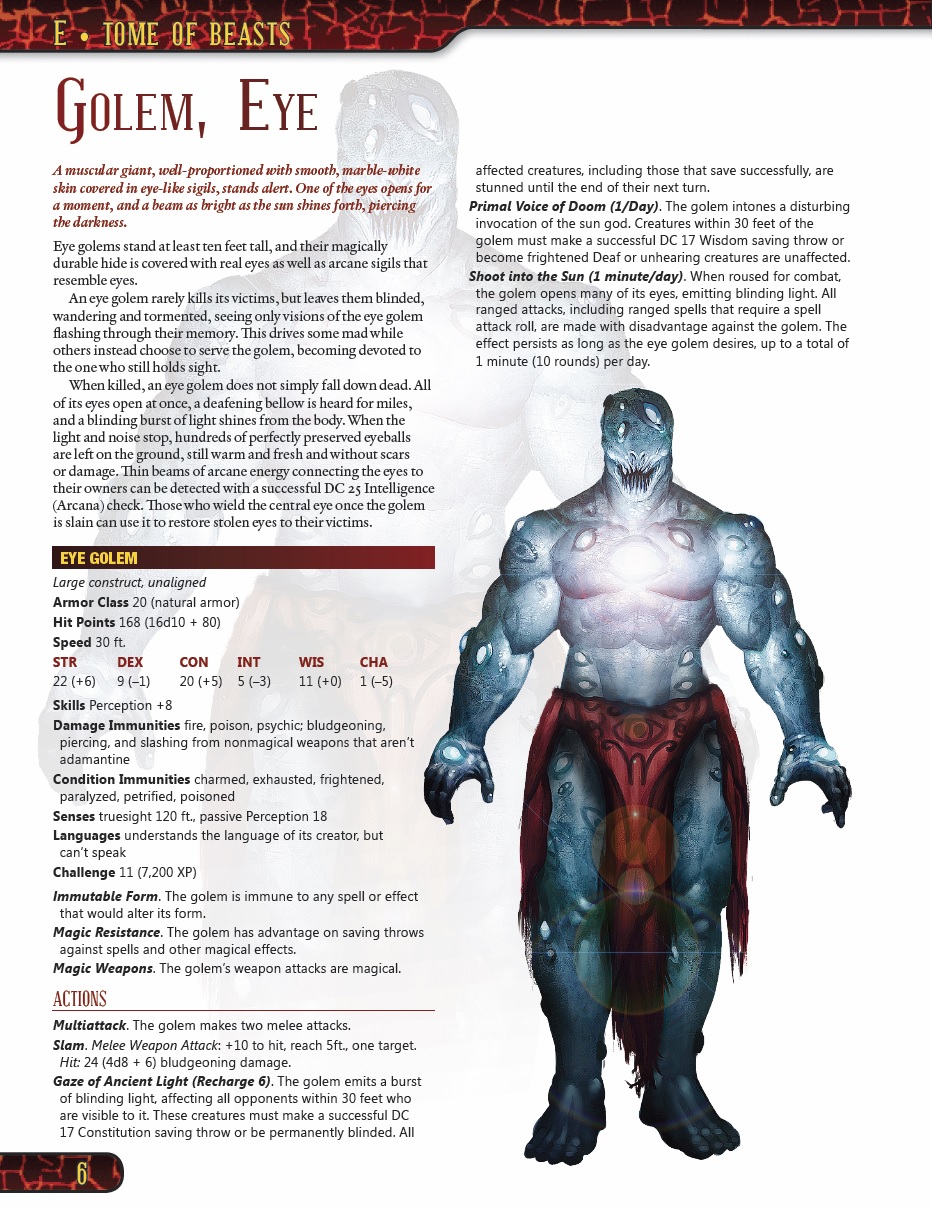 Is Challenge Rating missing? or is that what the 6 at the bottom of the page represents?

discoDM said:
Is Challenge Rating missing? or is that what the 6 at the bottom of the page represents?
Click to expand...

It's in about the middle of the stat block, but it is "Challenge" just like the 5th edition monster manual, rather than "CR"

I love it. Much more than just a bag of hp. Well done!

I like the after image of the monster in the background and length of flavour text. Nice to see 3PP step up their game and not just tweaking statblocks.

I'm likely to throw money at this. I liked the adventures well enough and the two race books were decent. Southland Heroes was funky at first but after a couple revisions it was much better. And I appreciated the update. They've proven themselves.

I remember Wolfgang Baur talking about this during a GenCon panel. He wanted to do it but was waiting for a new licence, but the content was ready to go. He was willing to risk a small book but not a big hardcover.
I guess he decided it had been long enough and could afford to pull the trigger, adjusting the book post Kickstarter but pre-printing if a licence drops.

Supporter
Pretty cool ... except I dislike when established companies use Kickstarter ... it's not for preorders.


It is, however, the new normal, and likely almost every company who isn't named Wizards or Paizo will be kickstarting or using a patronage model. It's cottage industry returned, really.


I would agree with you if it wasn't for enlightened self interest... I get a lot of stuff cheap on the old KS

wait, I thought Kobold Press was waiting for a OGL to release before they would release this. Has something changed? I applaud this and will most probably fund it. (I SOOO much want to!) This sounds great!

Darjr: I guess they think they have waiting long enough. Not sure.

It's handy for gauging how much interest there is. Should this be a product with a small, minimal print run? Should it be a large print run and something they try to get in stores? Should it just be PoD? What size should it be? Etc. Guessing wrong and having too many copies can break a company very easily, but too few can hurt, as a second print run would have minimum number of copies. And ordering a print run is crazy expensive.
Plus they can do things like having stretch goals for better covers or more monsters.
Plus, monster books be pricey. Because you need art every page, which is pricey in and of itself, but also means more layout work.


darjr said:
wait, I thought Kobold Press was waiting for a OGL to release before they would release this. Has something changed? I applaud this and will most probably fund it. (I SOOO much want to!) This sounds great!
Click to expand...

I guess after waiting a year and two months they decided if something was going to be announced it would have been announced.

We still haven't seen hide nor hair of a conversion document.


I don't think there's really a choice here. I mean, look at the recent Primeval Thule release for 5e from Sasquatch. Established company, been publishing a few books with some pretty big names on the cover. They got about 800 backers for the project. Got lots more money than they asked for, but, really, how many physical books should they actually publish? I think there were about a third of that 800 that actually got the physical product. So, maybe 200, 300 copies. That's vanity press levels. Nowhere near worth it to actually go out and take the risk on a large print run of a thousand books, most of which they won't sell.

The days of publishers being willing to eat the thousands of dollars of loss on unsold books is long gone. Never mind the distributers don't want to deal with it either.

bah... $55 for a book is more then too much, so much for discounted backing... this isn't even a prerelease bonus price it's just selling the damn book...

Cost has put me off nabbing this too (in my case pdfs). Not really seeing the value here.

I've been really happy with the other Kobold Press Kickstarters so I backed this.