In June it was revealed that Flying Buffalo -- the oldest RPG company currently in existence - was being sold to an undisclosed buyer. That buyer has now been announced as a holding company called Webbed Sphere, Inc., which describes itself as "a management and holding company for numerous ventures including online retailer Troll and Toad, home decor brands Darware, Decorae and AuldHome; game and toy publisher Toy Vault, and jigsaw puzzle manufacturer Mchezo. Its array of companies also specialize in property acquisition and development, business and consumer fulfillment services, liquidation outlets, and hobbyist gardening supplies." 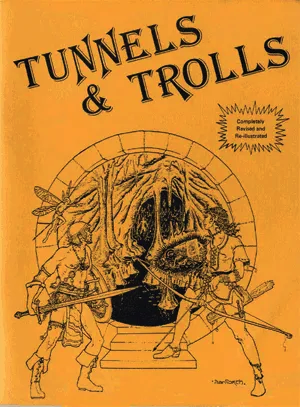 “Flying Buffalo and Rick Loomis hold an esteemed position in the history of gaming, and we are proud to now be a part of that legacy,” said John Ward, CEO of Webbed Sphere. “Flying Buffalo has thrilled generations of gamers over the past 50 years, and it will make a great compliment to our Toy Vault and Mchezo brand lines. I am excited about what the future holds.”

“It's always hard when your child finally grows up and leaves home, but I'm looking forward to a bigger, brighter future for Tunnels & Trolls under the organization of Webbed Sphere,” said Ken St. Andre, creator of Tunnels and Trolls. “May T&T spread even further to the greater world than it already has, and may Webbed Sphere make all their saving throws going forward!”

Douglas Malewicki, the inventor of the Nuclear War™ card game in 1965, said he’s excited about the opportunities the purchase of Flying Buffalo represents.

Specific announcements about Flying Buffalo properties will be forthcoming in the near future. The company plans to work diligently with retailers and distributors to make sure products are in stock and available to the public.

Flying Buffalo also plans to be an exhibitor at Gen Con, to be held in Indianapolis Sept. 16-19, and will release more exciting news as the show approaches.

About Flying Buffalo, Inc.
Flying Buffalo, Inc. is a publishing company best known for the second ever role playing game distributed to the mass market - Tunnels and Trolls. It was founded in 1972 by Rick Loomis and Steve MacGregor as a play-by-mail game company, but also published numerous popular role playing games, card games, and gaming supplements. It is located in Scottsdale, Arizona.

So, the question is who owns Webbed Sphere and why they bought Flying Buffalo...

The first one isn't too hard to find out, since it's a matter of public record.

The press release (if you follow the link to the Flying Buffalo page) says that Webbed Sphere is based out of Corbin, Kentucky. A look on the Kentucky Secretary of State's page turns up the company listing, which names the company officers as being John Robert Ward (CEO), Jonathan Boyd Huston (President and Director), and Alicia Aldridge (Secretary).

Clicking on any of those names shows what other companies they're officers in for that state, and one name jumps out immediately: Troll & Toad II, which is apparently the assumed name of Troll & Toad (notice that the address is the same). From what I can tell, Troll & Toad has been around longer than the articles of incorporation (from 2016) on the SoS page, so I'm guessing that means these guys assumed control of that company five years ago.

There are also quite a few other non-gaming companies there as well, but insofar as I'm aware, Troll & Toad is still going, so maybe that's a good sign?

They're based out of Corbin, Kentucky, which is the birthplace of Kentucky Fried Chicken. So obviously KFC is trying to tap the Flying Buffalo Wing market

I'm just hoping Webbed Sphere doesn't turn out to be owned by Ernie Gygax trying to revive another beloved, old school IP. We really don't need to go through THAT again...

That sucks. Too bad none of the bigger game companies stepped in. What a loss.

It depends who they name as CEO and what mission he is given. Games Workshop was bought by found management company a while back. The rejuvenation of GW in the last (edit) 6+ years is due to naming a CEO that is not a gamer but someone who understand how a business should be run.

I wouldn't say it's a lost cause yet. Too soon.

Marc_C said:
It depends who they name as CEO and what mission he is given. Games Workshop was bought by found management company a while back. The rejuvenation of GW in the last 4-5 years is due to naming a CEO that is not a gamer but someone who understand how a business should be run.

I wouldn't say it's a lost cause yet. Too soon.

overgeeked said:
Aren't they also in the middle of burning a lot of good will with fans literally right now.
Click to expand...


They are in the middle of giving a large bonus to their workers, which I don't think is burning much goodwill at all...

Webbed Sphere, Toy Vault and Troll and Toad are all out of Kentucky, so hopefully this is a good thing for folks like me here in KY!

Umbran said:
They are in the middle of giving a large bonus to their workers, which I don't think is burning much goodwill at all...
Click to expand...

Note the sentence you quoted was about fans.

Troll and Toad is a game retailer which has been around for 25 years: Troll And Toad | Online store for Magic: the Gathering, YuGiOh, Pokemon, Cards, Singles, Miniatures & More

I wouldn't knock them just for being a small-ish local company (compared to Hasbro).

Sounds like they're gamers who know how to run a successful business. And who have practically branched out in other (non-gaming and gaming) endeavors as business opportunities arose. And they have plans for supporting Tunnels & Trolls. Sounds good.

I mean, they even have Troll in their name already...and the same abbreviation: "T&T." Seems like a match. (We'll see!)

overgeeked said:
Is he the one responsible for GW pumping out 3 editions of 40k in that time? Yeah. That may be optimal from a business standpoint, but it rather sucks from a gamer POV. Aren't they also in the middle of burning a lot of good will with fans literally right now. Again, maybe great from a business standpoint, but really sucks from a gamer POV.
Click to expand...


The owner of the local store is telling me 40K sales are going really well. They didn't go down during Covid. Players are excited with the new 9th edition that came out in 2020. It more like a 8.5 edition with a lot if stuff backward compatible. Players are happy to finally get to play face to face in stores.

I think 6e was their equivalent of D&D4e. 2 years is short. Wargames are not like RPGs. 40K players burn through rule sets much faster and want new model sculpts all the time. It's called plasticrack for reason.

A lot of the profits comes from their digital games.

overgeeked said:
Note the sentence you quoted was about fans.
Click to expand...


Yeah. I guess the fans JUST HATE the workers getting paid more. Must cheese them off to no end! They'll go play heroclicks, or something, after hearing about those pay bonuses...

Umbran said:
They are in the middle of giving a large bonus to their workers, which I don't think is burning much goodwill at all...
Click to expand...

The bonus is very cool move on GW's part, but it has also sparked online conversation about how poorly GW treats staff overall. From what I've gathered, they are very . . . corporate, and definitely have a tendency to push profits over people. This conversation is not just happening in fan circles, but also with former employees. Which is not good, but hardly a sin unique to GW.

overgeeked said:
Note the sentence you quoted was about fans.
Click to expand...

I've been playing Warhammer games for quite some time, but haven't dived deep into the online fandom because, well . . . GW fans are always complaining about something, or at least, a vocal subset of the fans are. It's tiring. I'm sure that many of the complaints have a basis in truth, but I'm also sure that many don't. GW fandom isn't unique in this way, but oof, the negativity is strong and too overwhelming for me.

The current management is definitely turned up the frequency of the edition treadmill, and I have mixed thoughts. Each new edition IS an improvement over the previous, but they also do come rather quickly and I'm tiring of purchasing new, expensive books (even though they are beautifully done). My excitement is drained for the new Kill Team edition coming out soon, even though I love the concept of the game, I feel like I just bought the last version. Former GW staff have talked about GW's lack of focus on rules-crafting over pushing minis, and while they ARE a minis company, I think they would be better served taking a page from WotC's book and trying to slow down the edition treadmill with rules sets designed to last for a while. This lack is pushing me out of the hobby.

There's a lot of negativity in this thread over the acquisition . . . but it seems from the press release that the new company is determined to have Flying Buffalo continue to publish games at an accelerated rate than before.

Holding companies aren't inherently bad . . . and this one seems to be owned by folks following their passions, interests, and hobbies . . . and making each company within the fold successful in it's own right. Time will tell, but I'm not overly pessimistic about this news.

Umbran said:
Yeah. I guess the fans JUST HATE the workers getting paid more. Must cheese them off to no end! They'll go play heroclicks, or something, after hearing about those pay bonuses...
Click to expand...

GW is overcharging for things and pumping out 3 editions in 7 years and pocketing the profits. They’re right to give their workers more, but they’re still wildly overcharging and underpaying their staff, even with the bonuses. They don’t really deserve a pat on the back for finally doing something that mildly approaches the right thing.

The bit I was talking about is pulling fan films. That’s pissing off a lot of fans.