What do other games use in place of 'race'?

Staff member
It looks possible that D&D is going to move away from using the term 'race'. It's not the first, though. What terms do other games use?


What about other games? What are they using when not using 'race'?

Torchbearer refers to it as a character's "stock."
It's been a really long time since I looked at any of the books, but Palladium and Rifts at least used to refer to it as your RCC or Racial Character Class.

Supporter
All the ones that sprang immediately to mind have been mentioned. Origin maybe, IDK. I like Species too, but it has a pretty modern/scifi feel.

Supporter
Xenotype is cool too. Maybe not for D&D though. Bloodline perhaps. Or even just Blood. I am of Dwarven blood! It even rolls off the tongue in character pretty well for fantasy-adjacent genres.

Edit - although any idea of 'mixed blood' gets icky again.

I haven’t done it yet but I’m going to use “appearance” and it won’t have any mechanical adjustments.

Planet Mercenary, (I think that was the game’s name) uses Sophont, if my memory serves...

Adventure's in Middle-Earth has Cultures

Aleena died for your sins.

Um, probably not that helpful in the D&D context.

My own game uses Ancestry, as part of a character’s Origin.

Bawylie said:
I haven’t done it yet but I’m going to use “appearance” and it won’t have any mechanical adjustments.
Click to expand...

I've seen this in a number of indy rpgs where character creation is pretty free-form. Some combination of Appearance, Background, and Culture would seem to cover the bases.

uzirath said:
I've seen this in a number of indy rpgs where character creation is pretty free-form. Some combination of Appearance, Background, and Culture would seem to cover the bases.
Click to expand...

I was thinking earlier that stat bonuses should be tied to classes. I mean what are the odds that a player who selects a wizard is NOT looking for an INT boost?

I think some games don't even use a term. It has been a long time since I had my 2e Gamma World set, but in offering a choice between pure strain human, mutant, and mutated animal, I don't know if there was a set term to describe th choice. And FASERIP Marvel Superheroes just had "origin", which might include things like alien or high tech wonder.

I dont like Species as a term for fantasy - too modern, and generally I have no issue with using the term race. Landrace is a term used in animal and plant breeding to refer to naturally occuring domestic breeds (as opposed to human influenced breeds/cultivars)

Description / Adjectives / Talent / Abilities. Some games, like InSPECTREs and Paranoia do not have anywhere on the character sheet to define "race". Perhaps because everyone is typically human, but you can play bots in Paranoia and in InSPECTREs you play supernatural or other non-human characters. In games like this you just describe your character however you want plus give some adjectives or talents that may have mechanical effects. One problem with InSPECTREs, however, is if you are non-human, you don't get a talent. Instead, you get "Weird Abilities." That may be problematic, except that it is trying to capture a humorous, Ghostbusters feel.

Origin. The Expanse RPG. Again, you are generally playing one of three "kinds" of human: those from Earth, those from Mars, and those from "the Belt." But the concept can work with aliens just as well, IMO.

Peoples. Carnival Row, based on the TV series, using the Cypher system.

Kin. Labyrinth Adventure Game(based on the Jim Henson movie of the same name)

Race, but non-human genders ignored. Empire of the Petal Throne uses the term "race", and it describes human societies where women are typically subservient, but creates a legal category where a woman would be treated same as a man. Seems fairly progressive for a campaign that came our in 1975. What I found interesting, and has forgot about, is that gender was ignored for non-humans, as the concept was just too different from human conceptions to matter for gaming purposes: 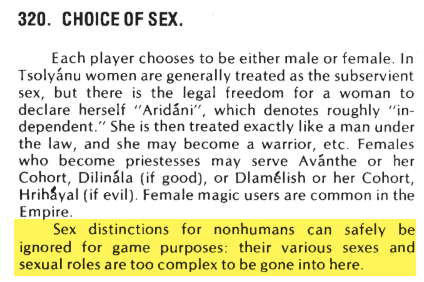 Noun. In No Thank You Evil! A Genre-bending RPG for kids based on the Cypher system, every character is defined by up to three elements that make up a colorful description—they form a sentence you can say: I’m a [adjective] [noun] who [verbs]. E.g., I’m a Fast Superhero who Experiments with Science; I’m a Kind Prince who Reads Great Books; I’m a Powerful Robot who Flies through the Sky.

Draw a Picture. Hero Kids is a fantasy RPG designed for children. You draw a picture of your character, which can be anything. Then select attributes, attacks, and skills that make sense for your character concept. E.g.: 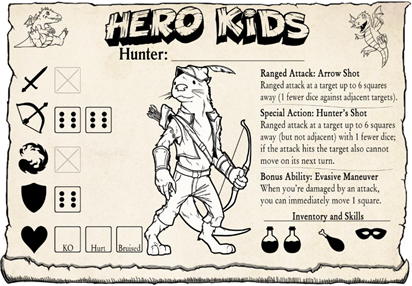 Shadowrun uses Metatype. There elves and orcs are explicitly humans who have goblinized.

I've been using "species" for about a year. That is not fully adequate for my Royal Navy Transhuman Space campaign, where the Admiralty found itself forced to create some type codes for crew members to describe their life support requirements, their ability to be backed up, and so on.

D&D also used subtype in 3e. It was useful conceptually but not very evocative.